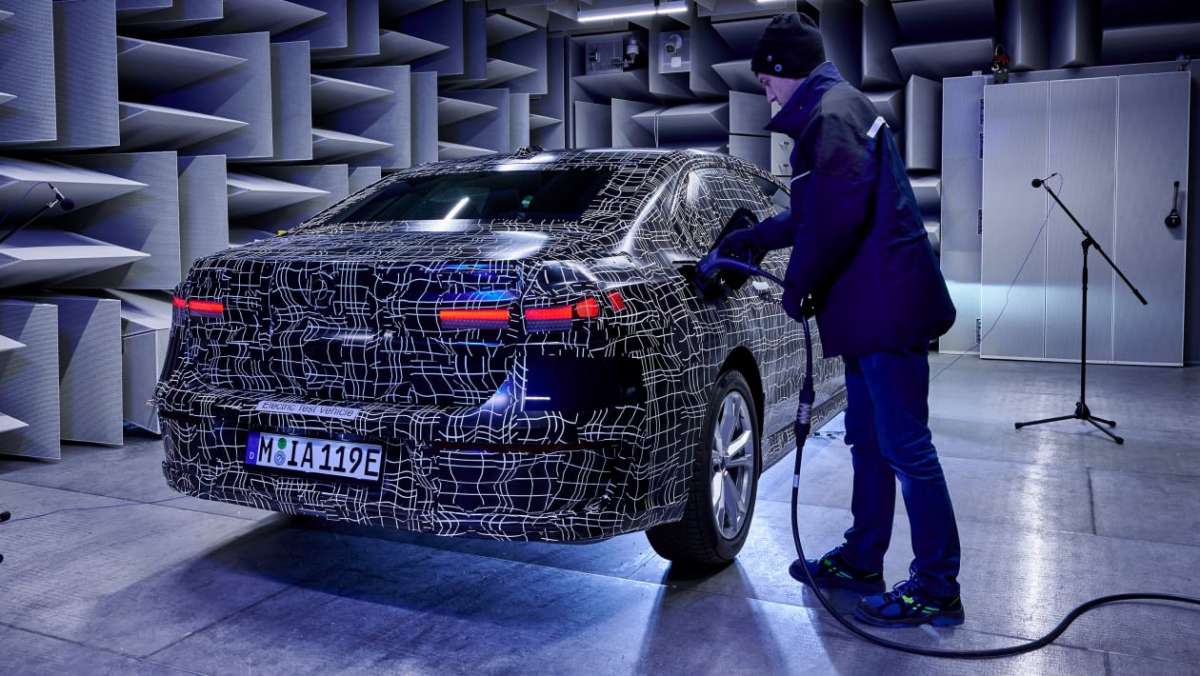 The 7-series saloon is getting an all-electric variant in its next generation with the i7, and following an official look at the EV undergoing tests earlier this year, BMW has released a new teaser. Details are still few and far between at this stage, but we won’t have to wait long with a full reveal now confirmed for April.

This new teaser offers very little new information about the luxury saloon, but the reveal of enlarged, illuminated kidney grilles shows that BMW certainly isn’t shying away from its recent controversial design language. Figures are still under wraps, but BMW also confirmed that the i7 would be ‘the most powerful BMW 7 Series,’ presumably eclipsing the V12-powered M760Li with an output of over 601bhp.

Based on the CLAR architecture that underpins the majority of BMW saloons, rather than a bespoke EV platform, the i7 is likely to adopt the powertrain found in the iX SUV. Official details are still under wraps, but a combination of the iX’s range-topping 105.2kWh battery pack and dual motor all-wheel drive setup would make for a competitive range of around 650 kilometers. Matching the iX M50’s 516bhp output would also give the i7 identical power to its direct rival, the sleek Mercedes-Benz EQS580.

BMW certainly hasn’t been afraid to push the boat out when it comes to design in recent years, challenging its traditional customer base with sports models like the new M3 and M4, and it looks like this new 7-series will be equally bold. While the test mules seen up to this point are still early prototypes lacking many production elements, the kidney grille looks to yet again be a focal point, taking up a vast majority of the real estate at the front end.

From here, the design deviates however, keeping hold of a resolutely upright three-box shape that channels the E38 7-series that was in production between 1994-2001, rather than the more homogeneous models that followed. We can also see that the new 7-series will adopt the split brightwork quirk of the current 3-series, which visually stretches the side windows, finishing with an upright and boxy tail. The rear plate’s movement to the lower bumper suggests a cleaner rear end design, and we expect the lighting around the back to emulate that seen on the iX SUV with slim horizontal light units.

Under the skin, the changes are likely to be less significant in the ordinary ICE 7-series lineup, with rear- or all-wheel drive, a range of six and eight-cylinder combustion engines, and a range of plug-in hybrid options on offer. The all-electric i7 will be part of the 7-series range, deviating from Mercedes Benz’s strategy of introducing a totally distinct electric model line as it has with S-class and EQS.

The new 7’s interior is also expected to be a big step forward, having typically informed new generation design and technology that trickles down to other model lines. Whether it goes as far as the new iX’s extremely minimalist and material-focused approach is unknown, but we look forward to seeing where BMW has decided to go when we do eventually see the production version arrive.

Like the E65 did back in 2001, this 7-series won’t just act as a flagship saloon for BMW, but also a looking glass into BMW’s other future models. So while it might be easy to pass off large luxury saloons like this as little more than a heritage flagship for a heritage brand, it still represents a hugely important step change for one of the industry’s biggest players.

Both the BMW 7-series and all-electric i7 are expected to surface later this year with order books opening before the end of 2022.