The Flying Spur Hybrid remains a brilliant luxury cruiser, but sacrifices charisma for its newfound efficiency 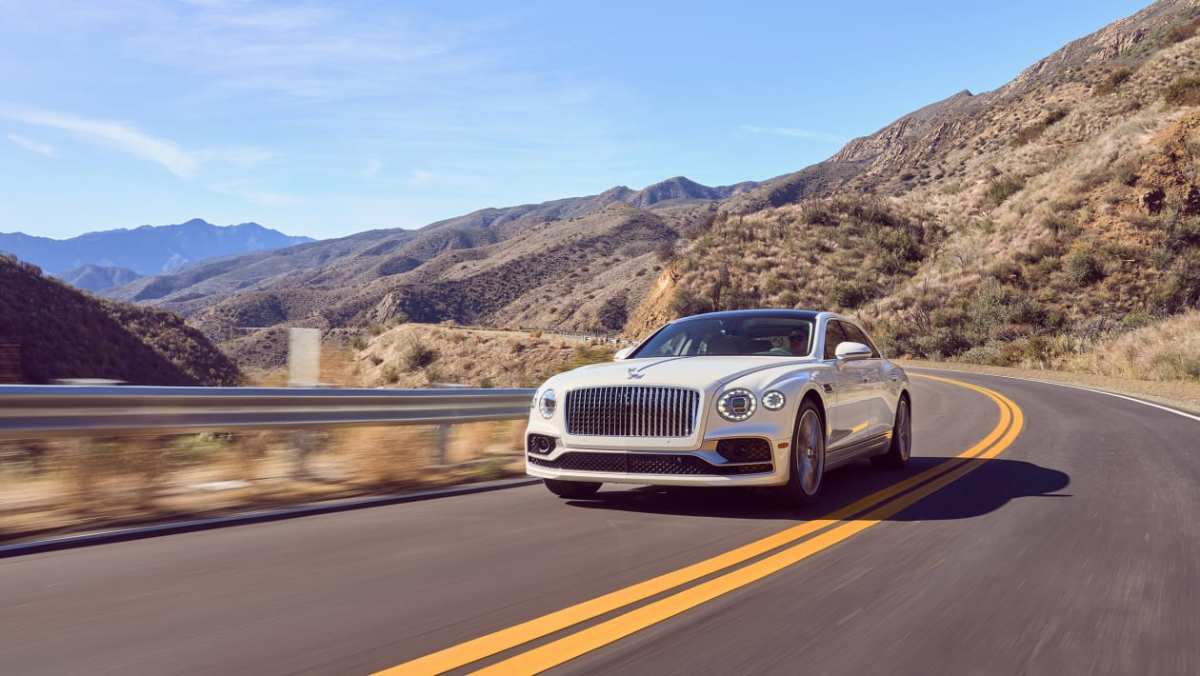 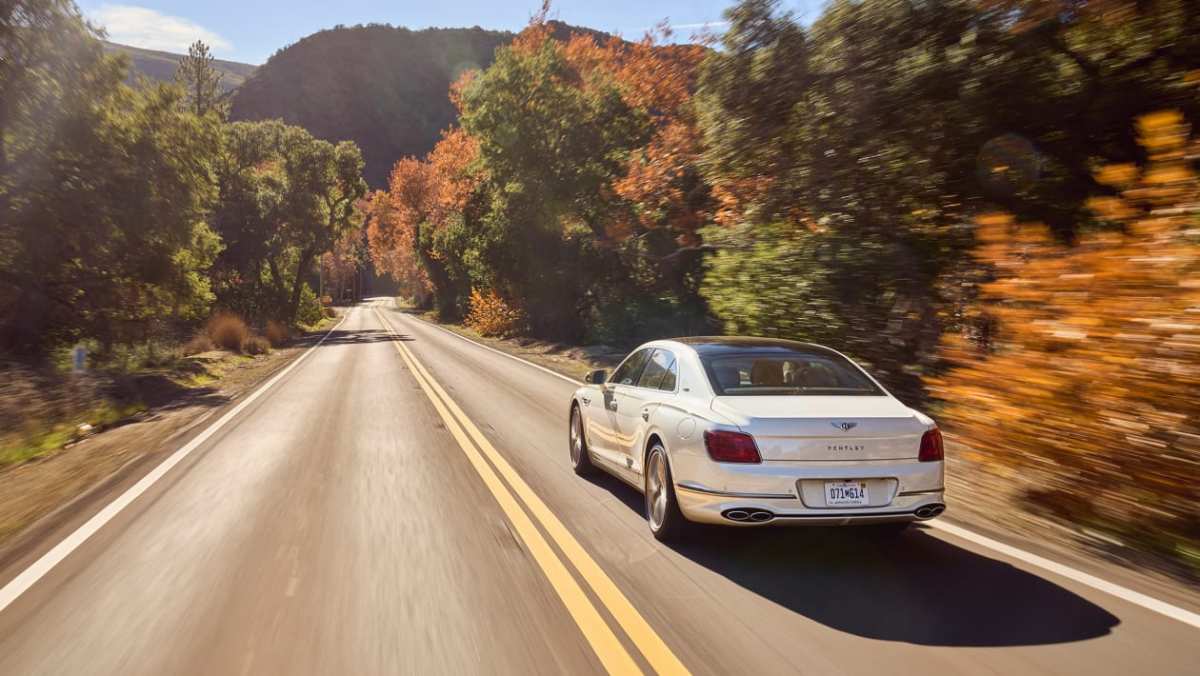 Bentley’s journey along the electrified vehicle trail started two years ago with the Bentayga hybrid, a vehicle that gained it entry into the game rather than one that revolutionised the sport. But like so many that have stepped onto the hybrid path before it, the firm’s follow-up is a far more resolved, relevant, and fit for purpose product. In the Flying Spur Hybrid you have a Bentley that redefines effortless luxury motoring, and crucially with little of the athleticism expected of Crewe’s finest export diminished.

In electric mode, Bentley is aiming for circa 40 kilometers of range when the car is certified for use in Europe and the UK. In a way then, the Flying Spur delivers the holy grail of luxury motoring as the 134bhp/295lb ft electric motor achieves the near-silent motoring experience the industry has been chasing from the start.

To achieve this, Bentley has adopted a plug-in system with a 14.1kWh battery charged by a permanently magnetised motor positioned between a 2.9-litre twin-turbo V6 engine and an eight-speed automatic gearbox. And when you’re not calling upon the regenerative capabilities of the V6 powertrain, all 410bhp and 406lb ft of it, you can plug the Flying Spur into a charger, where it will draw a maximum of 7kW to charge the 14.1kWh battery. A two and half hour 0-100% charge time isn’t very 2022, but Bentley knows its customers have driveways and garages and a home charger hardwired to the mains that will allow them to always start their journey with a full battery.

The battery, which accounts for in the region of 150kg of Hybrid’s weight gain over the V8, is positioned under the boot floor over the rear axle, which also changes the weight distribution from the V8’s 53/47 to 48/52. Including the motor and other charging requirements, the Hybrid adds an additional 175kg to the V8’s 2330kg unladen weight.

Do you notice the additional weight? 99 per cent of Flying Spur drivers won’t, even if they have come from a V8-powered example, and not only because the Hybrid is just a tenth slower when it comes to the sprint benchmarks and still tops 285kph. Because away from the road testing and performance figures and the stopwatches the Flying Spur Hybrid is every bit as quick as a V8 when you want and need it to be. With the V6 running and the electric motor charged and primed there’s a combined 553lb ft of torque to hustle you along, and it does so with little effort required as the instantaneous delivery of electric torque blends seamlessly with the turbocharged V6’s 98 RON generated twist and shove.

The acceleration off the line attracts the headlines but it’s how the powertrain calls on the electric motor when you need a little extra to pass slower traffic or make use of a clear road ahead that surprises and impresses. It negates the need for the gearbox to slip down a ratio or two, therefore, preventing any additional strain put upon the V6 when a gentle push of electrically generated torque is all that’s required. It’s what gives the Flying Spur a further layer of refinement as the internal peace is retained inside the sumptuous cabin. And it really is a fine place to be, regardless of whether you’re sat in the front or the rear, it just feels special and hand-crafted to another level compared to any rival.

And the integration of the electric and ICE is to be applauded. There’s no hesitation as the V6 is first woken from its slumber after you have started your journey in electric mode, nor any immediate indication that the electric motor has taken a back seat. On or off, the transition from ICE to E is seamless, the gentle shift of power source only noted when you glance at the instruments to see the tacho is now gliding around its counter or it’s resting at zero and the subtle green e-drive graphic is illuminated.

This sense of serenity continues with the rest of the Flying Spur’s on-road behaviour. Its air suspension remains as cosseting as it always has in any modern-day Bentley running this three-chamber system. From a driver’s perspective, there are no shocks or surprises as it rides with a flat calmness and when it leans into and through a corner it does so with a level of predictability and expectation removing any surprise leans or lurches. Yes, the steering is overly light, but it’s precise and it has a command over the front axle that means the car feels natural in how it moves across the road at your command.

Despite the headline performance figures starting with a five, the 217bhp/ton figure means neither axle is troubled when you let it all out and in full EV mode the electric motor doesn’t give any of the four driven wheels a sleepless night, either.

Criticisms? There’s little regenerative charging to be had, although the three distinct EV drive modes accompanying the regular Bentley driving modes offer the options to manage how the battery’s energy is deployed in terms of full-electric mode, default hybrid, or a hold mode that allows you to retain the battery’s charge until you arrive at a location where electric driving is most appropriate.

But when you do stretch the V6 and trouble its redline it’s a little coarse for what you would expect from a Bentley, although it’s unlikely to be a deal-breaker for many, even those stepping away from a V8; Porsche‘s twin-turbo V8 hybrid powertrain is some way off from finding its way to Crewe, incidentally.

Not that this V6 should be confused with the three-litre variant in the Bentayga Hybrid. Because while the Flying Spur’s cubic capacity drops to 2.9-litres, it utilises two turbochargers positioned within the engine’s vee, compared to the 3-litre’s single unit. The smaller capacity V6 also gets a new fuel injection system and combustion chamber changes that account for the additional 95bhp over the Bentayga’s petrol-fuelled motor. It’s not as sonorous, engaging or meaty as the V8, but this new V6 trumps what has gone before.

Hybrids, plug-in, or otherwise quite rightly received a bit of kicking when they were first introduced for being, put simply, hopeless. A laughable electric range (double figure mileage was celebrated in the streets) coupled to an asthmatic petrol engine that struggled to haul itself along a road let alone the accompanying hybrid technology resulted in some very poor cars that were poorly received by the press and customers alike. And they were frighteningly expensive to run in reality. But hybrid technology has been moving at an equally rampant pace as that in pure electric vehicles, which means they are more relevant for more people looking to take their first steps to some form of electrified motoring. More efficient, too, with the Flying Spur averaging nearly 9.4L/100km over a near 322-kilometer test route that mixed fast highway driving, long cross country routes and a mountain pass or two. A V8 would have struggled to get out of the teens.

Granted, a $198,000+ Bentley isn’t one for the masses, but it’s clear to see where and why a Flying Spur Hybrid would suit many in the market for Bentley’s four-door GT limo. It’s an exceptionally well-executed integration of tomorrow’s powertrain technology that adds substantially more than it takes away and feels the right direction for a car such as the Flying Spur to take at this moment in time.

What about rivals? Well Rolls-Royce retains its V12-only status for the Ghost, although the new all-electric Spectre could suggest an EV powertrain is in the pipeline for the more stately four-door. Otherwise, Mercedes and its new S-class hybrid trump the Bentley for range and variability, while the new EQS aims to do the same in an all-electric package. BMW‘s new 7 series is also shortly to come, it too in both hybrid and all-electric i7 form. Yet as Bentley’s always have, there’s a difference between these German counterparts and a Bentley on account of more than just its mechanics. The Flying Spur is a Bentley, and for most that’ll be all that matters.