The V12-powered yacht is Tecnomar’s most capable offering yet, and takes inspiration from Lamborghini’s most recent models 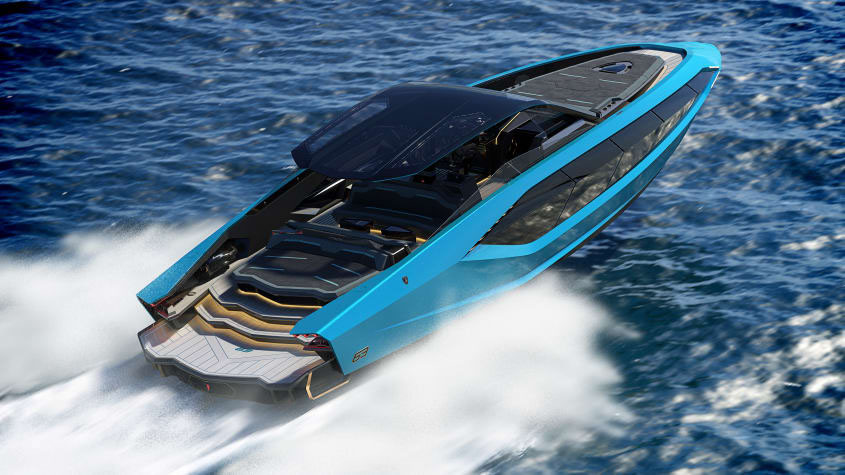 No longer are Lamborghini thrills landbound, as yacht maker Tecnomar has created a high-performance offering in collaboration with the Italian marque. Available from early 2021, the Tecnomar for Lamborghini 63’ adopts lightweight construction methods and two mammoth V12 power plants for ultimate performance.

At 63 feet in length, it’s not awfully compact, but thanks to the use of carbonfibre it falls into the ultra-lightweight boat classification, with a weight of 24 tons. Design is inspired primarily by Lamborghini’s most powerful model yet, the supercapacitor-equipped Siân. Its bow lights reference both the limited-run supercar and the Terzo Millennio concept, whilst other elements are said to take notes from Marcello Gandini’s Miura and Countach.

This isn’t the brand’s first foray into the boating world, with it first having applied one of its engines to a boat in the ’60s. Though its first attempt to enter the industry wasn’t successful, from 1984 it began to supply what has become a highly successful 8.2-litre marine V12 for off-shore racing, a unit that’s still in use today.

Step onboard and you’ll spot a number of Lamborghini references, from the use of hexagons to the adoption of Lamborghini’s Carbon Skin detailing, and even the same steering wheel you receive in the Siân supercar. Bolstered bucket seats are inspired by the car too, and as if it couldn’t get any more desirable, the start buttons for each of the 24-litre V12s are the flip-up kind taken directly from Lamborghini’s V12 machines.

No pricing has been announced, but Tecnomar says it will be available at the beginning of 2021.