Lamborghini Terzo Millennio – a look into the future of supercars 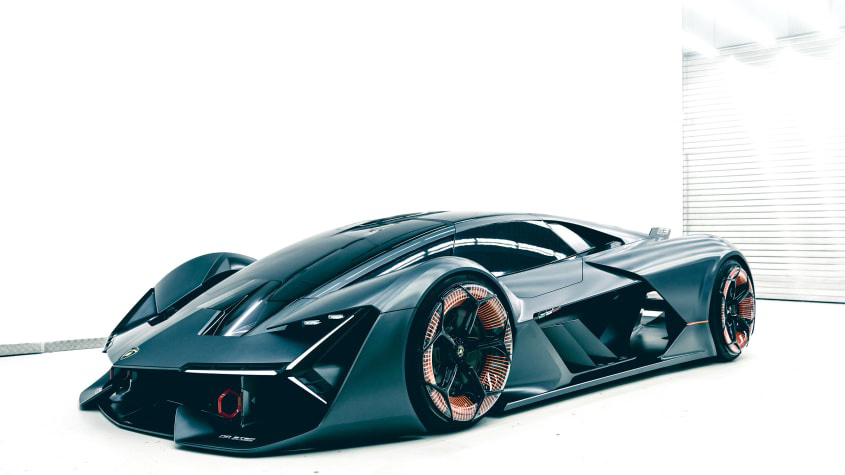 Lamborghini has set about challenging supercar convention with a new concept designed and engineered in collaboration with the Massachusetts Institute of Technology. Called the Lamborghini Terzo Millennio, which is Italian for third millennium, the concept is intended to explore future technology as much as design.

Focused on five aspects of supercar development, the Terzo Millennio is far more than an aesthetic exercise. The concept utilises an electric powertrain, but it’s the innovation surrounding it that really excites. With an electric motor at each wheel the Lamborghini does away with a traditional centrally mounted drivetrain, which gave designers a new level of freedom when it came to packaging, allowing them to redevelop the entire system around new parameters.

Feeding these electric motors is a new form of energy storage system, designed to improve the efficiency of the power being drawn and replenished from the batteries. Eseentially this would be a supercapacitor, which can release very large amounts of energy very quickly, which is perfect for a car chasing next generation supercar levels of performance. This set-up also promises quick recharge using kinectic energy gathered when the car slows, plus energy transfer and storage is very efficient with little lost during the various charge and discharge phases.

Perhaps the most exciting aspect of the new car is the potential energy storage possibility presented by the carbon fibre structure itself. Bear with us here, but Lamborghini has started developing carbonfibre chassis components with the ability to accumulate energy for storage in the body itself. It’s this fundamental shift in design thinking that will keep supercar manufacturers like Lamborghini ahead of mundane transport machines in the technology stakes.

This isn’t it though, as the carbonfibre components don’t only hold energy, but are also ‘self-healing’. Much like self-healing paint on some Infiniti models, the resin, which forms the glue holding the carbonfibre together, will detect and repair cracks in the material substructure, eliminating the risk of a structural crack then forming from it. Aside from improving lifecycle properties, it also allows engineers to reduce the amount of material required in structurally high-stress areas, thus reducing weight and complexity.

These technological innovations allowed Lamborghini’s designers the ability to create a body around an entirely new architecture. The usual cab-forward design employed by Lamborghini’s mid-engined vehicles has been retained, but is more accentuated here. To aid visibility, designers have actually glazed the majority of the front fascia, giving the car an ultra-low scuttle. The front wings that house the wheels then appear to float off this main body, giving the front-end hints of Aston Martin Valkyrie in profile.

To contrast against the highly technical aerodynamic appendages within the open areas of the exterior design, the outer shell’s surfacing takes on a more organic quality. Peer into the voids that would have once been intakes for a mid-mounted engine and you’ll see right through the structure and out towards the rear, much like the new Ford GT.

Lamborghini’s history at the forefront of supercar development might sound a little off kilter for a brand that still only offers old school naturally aspirated engines, but it was Lamborghini who brought about massive leaps in carbonfibre and composite technology in the 1970’s.

With so much uncertainty around the future of the supercar leading towards a future of electric and autonomous vehicles, it’s encouraging to see manufacturers like Lamborghini looking ahead to see how they can integrate themselves into a new reality, rather than mull about in denial about the forthcoming change to an industry.