I can’t quite put my finger on what it is, be it the orange rays of dawn wafting auspiciously between Dubai’s high rises, or 90-minutes of sleep finally starting to catch up with me, but I’m feeling unusually nostalgic this morning. Buckle up, I’m about to get wistful.

It’s understandable, given that today marks my final regional test drive for crankandpiston, but even so, this morning my mind can’t help wandering back to my first official test drive with the company. Ironic, given that the first and last couldn’t be more different.
The first was back in January 2012. A slightly greener James – still without a regional driving license – was invited to try the brand new Porsche 911 around Abu Dhabi’s Yas Marina Circuit, a venue I had no experience of outside a flat screen TV. It’s the motoring dictionary’s definition of hitting the ground running.

Fast forward five and a half years and today’s test model – my last – is a 2017 Bentley Mulsanne Speed. It’s the marque’s flagship limousine, the most opulent example of British luxury since the Rolls-Royce Phantom, and, according to the boys and girls at Crewe at least, the closest you’ll get to a ‘driver’s Mulsanne’. We’re way outside Porsche 911 territory here…

Still, nostalgia and a head full of cobwebs at 4am have a funny habit of getting out of hand. As photographer Mohamed sets up his first shots of the day, my peripheral vision catches the word ‘Bentley’ in the rounded LED headlights. Gimmicky and yet somehow elegant. I like it. Suddenly my mind is back-tracking on a trip down memory lane to the day my mind was blown by a Continental GT3-R keeping a McLaren 650S honest on one of the greatest driving roads in the region. Or the day I got a little carried away behind the wheel of a Continental GT Speed mid-battle with an Aston Martin DB9, and quite literally ignited the brakes (cue fevered panic). From there I’m reminded of a DB9 Carbon Black up to its axles in very soft sand after an ambitiously abortive night shoot; an iPhone fried to within an inch of its circuit board in a Ferrari FF glove box; the guttural noises that escaped my lungs during a drive in an Ariel Atom 3.5; a rather sheepish phone call to BMW’s PR team to explain why their brand new Alpina B6 had been impounded by the police. There’s been plenty of roughs with the smooth over the last five years…

A couple of hard elbow jabs from my crankandpiston colleague Jamil and calls from a slightly red-faced Mohammed bring me back to the present. They have a point. The Mulsanne Speed deserves my full attention, after all, for no other reason than the sheer size of the brute.
A mid-life facelift in 2016 brought with it little in terms of cosmetic tweaks, the wider front grille and revised bumper, the new taillights shaped like a ‘B’, and 21in alloys exclusive to the Mulsanne the gist of it. Even in the Speed, a couple of insignia badges along the doorsills and some rifled ‘sport’ exhausts are about it. This would be disappointing were it not for the ‘uniquely assertive style’ – a handsome one at that – which Bentley has clearly taken great pains to preserve since the model’s arrival in 2010.

That, plus its sheer presence. The Mulsanne is more than 5.5m long and just under 2.5m wide, and if this, somehow, doesn’t offer enough space for captains of industry and heads of state handing over their hard-earned half mills, a new Extended Wheelbase version appeared in 2016 with an additional 250m of rear legroom. Light cosmetic tweaks or otherwise, Bentley has never short-changed in terms of refinement with its halo limousine. Just ask the men and women of Crewe who spend 400 hours hand-building every one.

How about the inside?

Then there’s the interior. Cue a well-timed segue from Mohamed asking me to turn this $435K edifice ‘just a bit closer to the kerb’. Hmmm…
Upon opening the door, you immediately sink into sumptuous armchairs, your hands resting on the small but perfectly formed leather-clad steering wheel, lustrous – and repeatedly – varnished wood landing softly by your left elbow as the door closes. In front of me lies the customary, inverted speedometer and odometer gauges, which while a little disconcerting to use at first, relay all necessary information cleanly. Beneath yet more brilliantly polished oak upholstery and Bentley’s solid-milled aluminium air vents though lies myriad switchgear for climate control and infotainment on the centre console. It’s a setup that, quite honestly, would look comparatively gaudy were it not immediately obvious how much work has gone into crafting them. Much like the rear curtains and visor, even if, collectively, they restrict rear visibility quite badly.

It’s a highly impressive layout, albeit one that’s side-lined when I thumb the well-hidden Stop/Start button. This fires the 6¾–litre twin turbocharged V8 into life with a semi-rousing bark that quickly dissipates into a lingering burble. Forget the looks, it’s the drivetrain Bentley has focused its attention on with its new ‘drivers’ Mulsanne (30 of those 400 build hours are spent on the engine alone).

Foregoing the all-wheel drive W12 setup in Bentley’s Bentayga SUV, the rear-wheel driven V8 in the Speed has received all new chambers, inlet ports, fuel injectors and spark plugs to push power over the ‘basic’ Mulsanne by 25bhp. While that may not seem a gigantic leap, bear in mind all this equates to 530bhp and – the Speed’s trump card – a whopping 811lb ft of torque. Despite a solid 2685kg kerb weight, the Speed can sprint from 0-100kph in just under five seconds, a figure that will put even novice James’ Porsche 991 to the test on Yas’ main straight. Top speed has also risen from 296kph to 305kph, quite a bit down on the 400kph speeds recorded on Le Mans’ Mulsanne Straight the car is named after, but still bloody impressive for a three-ton luxury limousine.

Previous ArticleWrench. The VR videogame you and your kids need to be playing.
Next Article Decision is made, the VW I.D. Buzz is coming 2022. 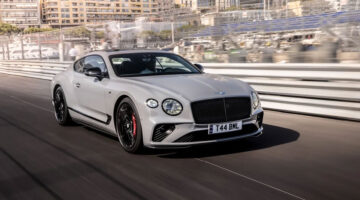