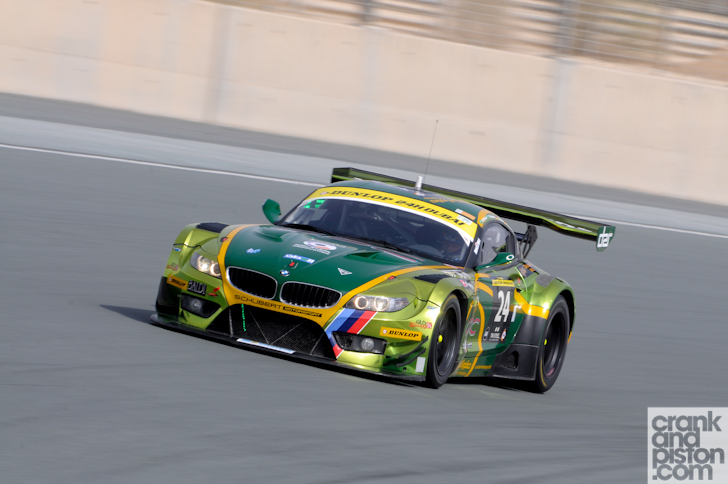 First though, there’s qualifying to get through. I question whether, in a 24-hour race, it makes much difference where the cars start from. Can a few hundred metres really matter over such a long period of racing?

Absolutely, Abdulaziz says. “It’s important to qualify at the front, to stay away from everything that’s happening in the back. We’ve got more than 80 cars and a lot can happen in the midfield. Our target is to be in the front or second row and stay clear. If we’re fast, we stay out of trouble around us so we can just go for it.”

After a frenetic series of qualifying sessions, the #24 car lands the fourth quickest time, which pleases its pilot. The real story of the day though is the Team Abu Dhabi Mercedes, which takes pole position after a marathon stint by mechanics to rebuild the car after its practice crash. Hopes that the Falcons’ main rival would be incapacitated appear to be in vain. 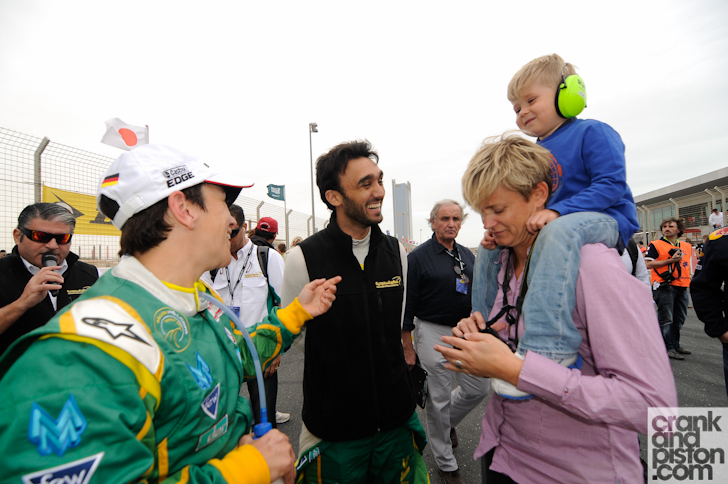 Nevertheless, the following morning Abdulaziz is smiling as the 2pm race start approaches.

“It’s all well. Hopefully we can have a clean and clear start. We’ve qualified in the front pack, which is important. But the most important thing in a 24-hour race is race pace. For sure it’ll be slower than qualifying so we need to make sure we have a really comfortable car to drive for the whole stint.

“We now have two hours before the race start and we’re just checking the car’s mirrors, adjusting belts, checking the information board so we can see it at night, check the fuelling station so we know where to go if there are other cars there. All the things we need to sort out before the race and the chaos happens.” 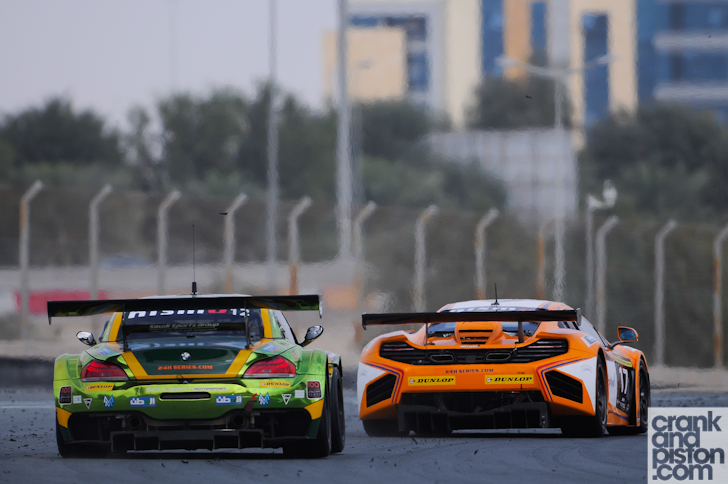 It sounds like a lot to take in, but once again Abdulaziz looks relaxed. “I think once the race starts then everything will sink in that we’re actually started. I just concentrate on doing a good stint, that’s my focus. I’m taking the second stint about an hour and 10 minutes after the race starts.”

At 2pm, the cars embark on two warm up laps and then the huge field streams past the grandstand and down into turn one. The #26 Attempto Racing Porsche nips into the lead, and the first hour sees a titanic battle between its driver Nicki Thiim, Jeroen Bleekemoelen in the Team Abu Dhabi SLS and Claudia Huertgen in the #24 Saudi Falcons car. Just half an hour in though, and the Attempto Racing car catches fire and coasts to a halt, before being towed back to the pits. That left Team Abu Dhabi in the lead. 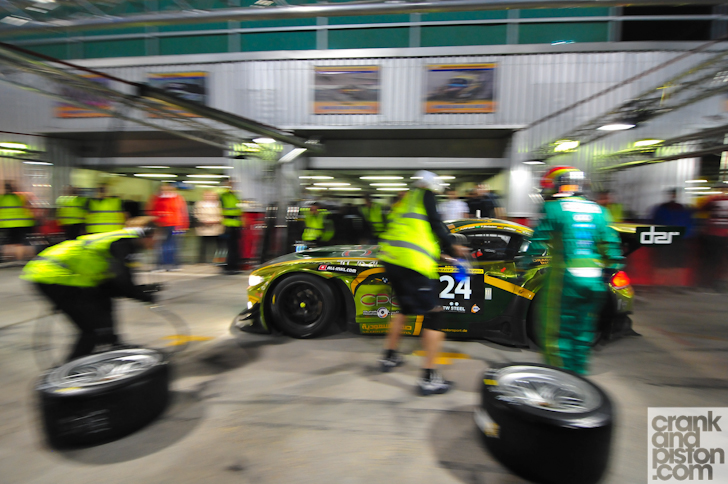 Shortly after 3pm, Huertgen brings the #24 car into the pits from second place. As soon as the car stops it rises on air jacks and mechanics frantically swarm around, checking tyres, cleaning the windscreen and opening the door. Huertgen scurries out and Abdulaziz leaps in, connecting his radio, hooking up his drink bag and strapping himself in before the car is lowered. The rear wheels spin as he roars away towards the pit exit.

Hi pace is instantly good, but after half an hour a Code 60 is called. Used in place of a safety car, the call means all drivers have to slow to 60kph so that stricken vehicles can be moved from the track. Aziz uses the opportunity to pit for fuel, and then heads out for another hour before handing over to his German teammate. 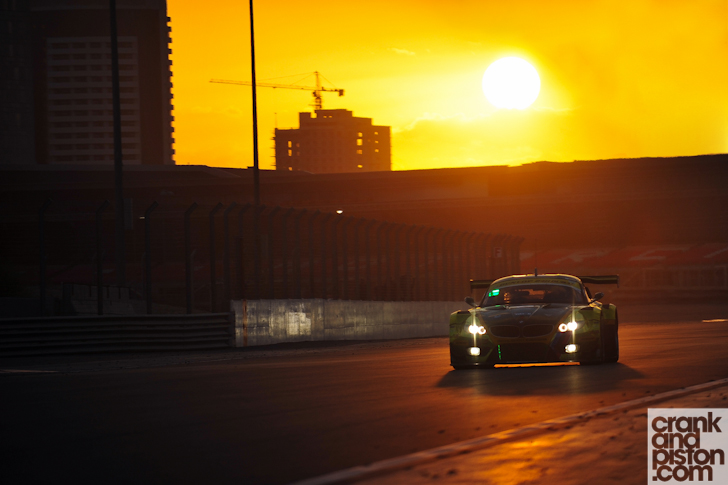 The sun is beginning to lower in the sky as he recounts his first taste of racing in 2013. “It went well, a bit longer than I expected and there were a couple of incidents but the car felt really good. At the end the tyres were going and sliding all over the place but the lap times were there.

“I think we’re in fifth place now, but it’s all messed up as a lot of people pitted during the Code 60. It’s pretty crazy out there. Some of the guys with the fast cars turn in front of you and you really have to watch out. I try to push in and if you see them coming in you brake really hard! I just try to pray that I don’t hit anyone. I had two or three close calls. Now everything is sunk in. I’m going to go eat something quickly, get a message and then get out again in a few hours. We’ve been here since 9am so maybe I’ll take a short nap. But I’m feeling good.” 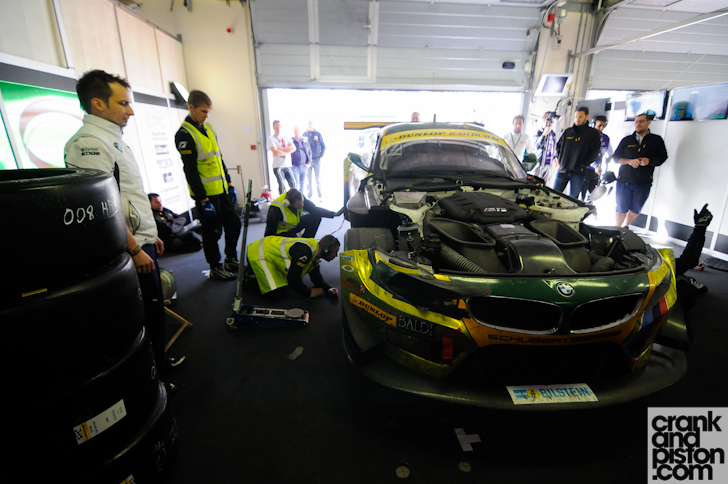 Darkness falls, but the racing continues relentlessly. Casualties start to mount up. A moment’s inattention can have serious ramifications, and as midnight comes and goes, retirement numbers are rising. Increasing numbers of cars are adorned with hastily applied tape, and debris litters the track.

As the halfway mark approaches, the #12 Falcons car is involved in an accident, and despite the best efforts of the mechanics, the damage proves terminal. This leaves the #24 car as the team’s only hope.