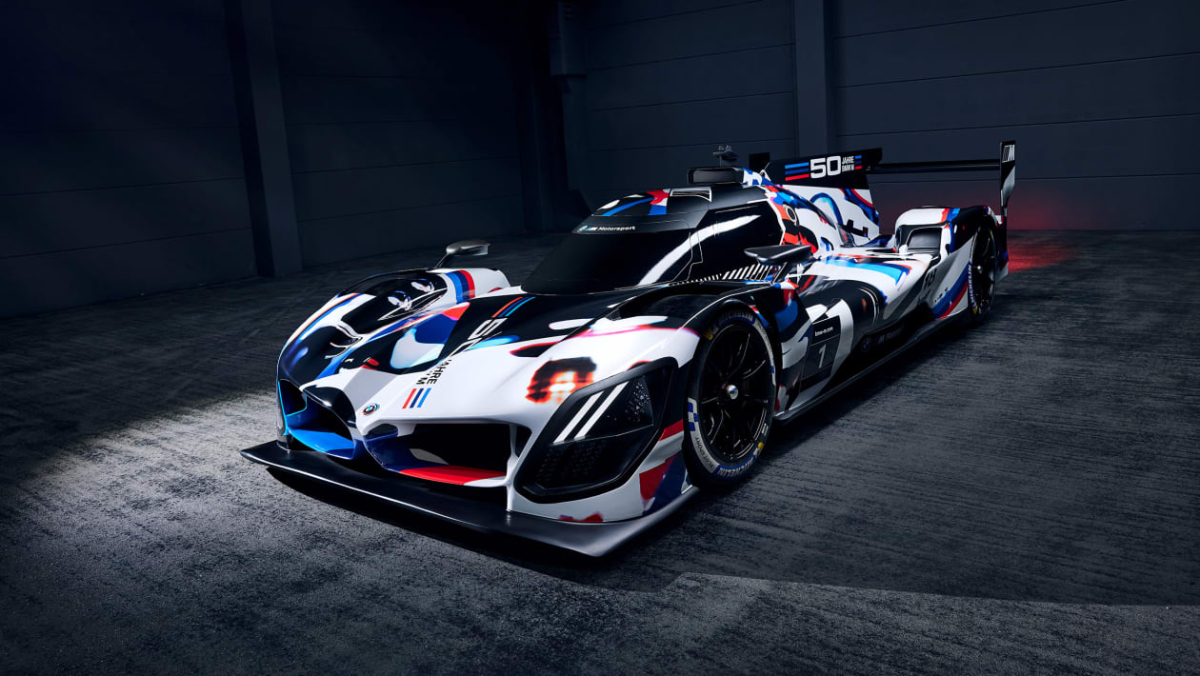 BMW M has revealed new information about its LMDh-class racer that’s poised to compete in the American IMSA racing series from 2023. Called the BMW M Hybrid V8, it’s just the latest addition to the regulation class that will also include entries from Porsche, Lamborghini, Cadillac and Acura.

BMW’s new racer will be based on a control chassis from Dallara, and be powered by a twin-turbocharged V8 engine derived from a previous DTM program. This is supplemented by a control hybrid system from Bosch and battery pack from Williams Advanced Engineering, packaged onto the front axle. This is a similar development path that rivals from Porsche and Lamborghini have taken, with both teams opting for a powertrain utilising a twin-turbocharged V8.

BMW’s V8 engine goes under the internal designation P66/3, which itself is a development of the engine utilised in its DTM racers from 2018 and 2019. As a stressed member in the DTM racer, it proved to be an ideal starting point for its application in its LMDh racer, but has required lots of further development to bring it into line with the endurance classification’s requirements.

In the initial research phase, BMW explored both the P48 turbocharged four-cylinder unit used in its current DTM cars, but it didn’t hit its durability targets, while the P63 twin-turbo V8 found in the old M8 GTE Pro racer was deemed too heavy.

The process of turning the naturally aspirated P66 into a turbocharged and hybridised powertrain for the BMW M V8 Hybrid has resulted in its P66/3 nomenclature, but it’s retained key elements of the base engine such as its 3999cc swept capacity, 90-degree V angle and a high 8200rpm redline. Without taking into consideration its hybrid elements, the combustion engine on its own is rated at 631bhp, and produces 479lb ft of torque.

The body and chassis

The new BMW M V8 Hybrid’s distinctive bodywork was designed by BMW’s Designworks department, an off-shoot of the main design team that usually focuses on broader product, mobility and system design. As such, the design is not derived from an existing BMW road or race car, although it does incorporate typical BMW motifs including a kidney grille, double lighting element and a new interpretation of the iconic Hofmeister kink.

However the big question all of Europe is still asking is whether BMW M will race in Europe, given the European WEC series has integrated LMDh cars into its future plans with a Balance of Performance mandate that will make both LMDh and LMh class racers competitive with one another. It would also mean that BMW would rejoin the iconic Le Mans 24h, with Peugeot, Ferrari, Toyota and Alpine to rival in pursuit of its next win.

BMW’s first and only Le Mans triumph came back in 1999, with the V12 LMR co-developed with Williams, the brand’s F1 technical partner at the time. Powered by a version of the S70 V12 engine featured in both the McLaren F1 road car and Le Mans-winning F1 GTR racer, BMW’s foray into endurance racing was a fleeting but ultimately successful enterprise, something it’s no doubt hoping to emulate, which makes it even more of a shame to know it’ll only compete in the USA.

Still, with no fewer than eight entries from the big brands across the LMDh and LMH classes, plus smaller privateer teams too, we’re set to see the widest and most varied field in endurance racing for a generation.