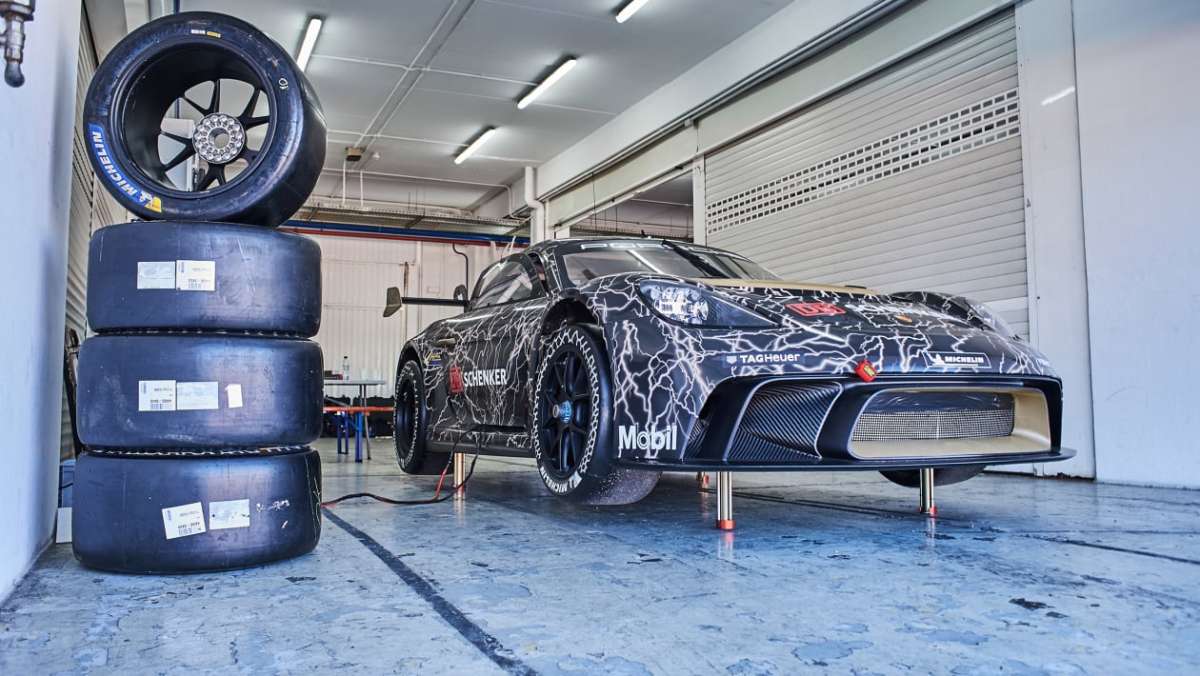 There’s never been a Porsche Motorsport product quite like the 718 GT4 ePerformance. This all-electric machine – which packs a 1073bhp punch and can lap most race tracks faster than a 992 Cup car – is the future of Porsche’s one-make motorsport business.

Crucially, this being Porsche, everything learned in the development of this motorsport test mule will inevitably be fed into future Porsche road car programmes. Track tests come no more tantalising than this.

Porsche had two starting points for this project. The first and most obvious is the 718 Cayman GT4 Cup, which Porsche Motorsport builds alongside its 911 Cup, GT3 and RSR racers. This was then adapted to accept an evolved EV powertrain taken from the Mission R concept, which we drove last year.

Porsche also plundered its racing parts bin, fitting the GT4 Cup with 911 RSR suspension, then wrapping it in a bespoke wide-track body made by Porsche Style. With big wings and an even bigger rear diffuser it looks every inch the ruthless race car, though lightning bolt test livery aside it offers almost no clues as to what makes it so special.

So much of Porsche’s recent racing activity has informed the development of this car. From the e-motor technology employed in the 919 Hybrid programme to the hugely sophisticated control systems which are the real hotbed of innovation in Formula E. Look back further and the 918 Spyder and 911 GT3-R Hybrid (which you’ll recall used a flywheel KERS system) have all played their part.

We’re all having to recalibrate what constitutes impressive power outputs in an EV world, but with a maximum 1073bhp the ePerformance leaves you in no doubt it’s a major league machine. With two electric motors – one in the nose (approximately where the petrol tank would have sat in the regular GT4) driving the front axle, and the other where the GT4’s flat-six would have been driving the rear axle – it’s something of a stopgap platform in terms of packaging, but the principle of a robust, serviceable EV racing car is clear to see, with the same gearbox, electric motors and pulse-controlled inverters on the front and rear axles.

Before we’re let loose driving solo we’re treated to a passenger ride alongside Timo Bernhard. As one of Porsche’s main development drivers on the ePerformance programme he knows the car better than anyone. Unsurprisingly he’s in the groove from the moment we leave the pit lane, punching the throttle and leaving my stomach behind in a way only an EV can. The precision and immediacy of his inputs are almost binary, but this belies a degree of finesse and sensitivity that’s making fine adjustments throughout the braking, turn-in and corner exit phases.

Like Timo we will run in two settings – Drive Mode 3, which is effectively Race mode and yields circa 600bhp, followed by a second run in Drive Mode 9, which equates to Qualifying mode and liberates every last kW the ePerformance has to offer. The former is good for 30 to 40 minutes of racing with no tailing-off of power or performance, while the banzai Quali mode can be sustained for 15 minutes. Again, with no performance drop-off, or ‘thermally induced derating’ to give it the correct EV terminology.

It’s in the heat management of the ePerformance electric motors and battery system that Porsche has made big leaps, thanks to a direct oil cooling system. This circulates special low viscosity lubricant through the batteries and the motors via a front-mounted oil cooler to maintain these components at optimum temperature. Because it washes over the full surface area of the battery cells it manages the heat much more effectively and efficiently.

To allow capacity for regenerative braking to be fed into the battery cells at the first braking zone, the ePerformance starts each session with 85 per cent charge. Porsche says that in the course of a typical race as much as 50 per cent of the total energy used would come from regen, which shows how effective the system is, and how much the batteries have to cope with in terms of rapid charging and discharging.

Talking of rapid charging, the GT4 ePerformance – which employs 900V architecture with a charging capacity of 350kW – is charged via a monolithic DC charging station which Porsche has brought to the test and stood immediately behind the pit garage. It takes the car from 5 to 80 per cent charge in circa 15min. Oh for that kind of turnaround time at your local public charging station.

Driving the ePerformance is an unforgettable experience. One which begins with a pre-flight routine that’s laughably simple and eerily quiet. Once switched on there are a few clicks and whirrs from within the machine. Then all you need to do is put your foot on the brake, select your Drive Mode via a rotary control on the steering wheel, squeeze the throttle and away you go. No fuss, no howling petrol engine or fear of being humiliated by a sharp clutch, just a smooth take-off accompanied by a whir that’s mostly drowned by the whine and crude clatter of the differentials and other rotating components.

Floor the throttle and the soundtrack switches in an instant, a piercing shriek of the electric motors building endlessly in pitch and volume as speed builds. There are no gears so you just point and shoot. From the inside it’s a maelstrom of mechanical components combined with the otherworldly sound of electrical energy being deployed under acceleration and harvested under braking. From the outside it sounds like a cross between a gas turbine and a low flying jet. A grid-full of these will make an unholy racket.

In Drive Mode 3 the performance is stonking up to 193kph or so, but then you feel the ferocity of the initial acceleration begin to soften a little. In Drive Mode 9 it is on another level, that unmistakable feeling of accelerative freefall feeling pretty much unrelenting. On Valencia’s start-finish straight the difference in VMAX is significant, 600bhp taking you to 257kph, while unleashing the full 1000+bhp slingshots you to 277kph within the same distance.

That Quali mode speed advantage is mirrored at pretty much every point on the lap, the ePerformance arriving at the braking points some 15-25kph faster. It’s a unique challenge that you simply don’t get with conventional ICE-powered race cars, and something that really focusses your mind when trying to slow the car at the end of the main straight.

Braking has always been the greatest challenge in any hybrid or all-electric high-performance car. The constantly fluctuating levels of regen and the need to manage this effect can play havoc with pedal feel, which undermines consistency and confidence. The GT4 ePerformance has pretty much nailed those issues, though it still requires skill to find the limit under braking, but only because you’re now able to feel for the absolute limit.

It’s a challenge with reward. Unlike 99% of contemporary slicks-and-wings racing cars, rather than hammer the brake pedal as hard as you can, then bleed off the pressure as you close in on the slowest point of the corner, you need to apply significant measured pressure that rapidly builds towards maximum braking, then try and keep it at that threshold with sensitive modulation of pedal pressure.

If you’re not sensitive enough it’s possible to lock, or at least under-rotate, a lightly loaded inside front wheel without being fully aware it’s happening. Consider you’re operating within a ferociously complex brake-by-wire loop in which braking effort and regen is being continually monitored, balanced and blended between the conventional discs and pads and the resistance from the e-motors it’s a wonder the ePerformance does the same thing twice. The fidelity with which this braking system works is incredible.

Porsche has put enormous effort into understanding and exploiting the unique dynamic opportunities offered by a super-smart all-wheel drive EV drivetrain. This has resulted in the GT4 ePerformance displaying some very neat tricks. These are most noticeable – and most exploitable – as you enter the final phase of braking and just begin to point the car into the apex.

Nail your braking and segue smoothly from middle pedal to initial steering input and you feel the car magically rotate. Not with enough yaw to need rapid correction, but just enough to make you think you might. It’s a wonderful sensation, and a behaviour that has clearly been dialled-in to counter the natural balance of the GT4 ePerformance, which tends to push towards understeer if you don’t manage to initiate the magical rotation.

This engineered agility serves to take some of the burden away from the front tyres, and also tightens your cornering radius, so you can get the car stopped, turned and pointed towards the corner exit without having to lean so hard on the front tyres. From here it’s a case of swallowing hard and nailing the throttle, trusting that there’s ample grip and traction to fire you out with minimal drama, aside from the rocket sled punch, which never feels less than dizzying.

The GT4 ePerformance is a sledgehammer in terms of its heavy-hitting accelerative power, but it demonstrates an ability to deliver the shades of grey upon which driving experiences that live long in the memory depend. That’s immensely reassuring, for if you strip away the race car rawness you can see – and feel – that Porsche is refining, reinventing and reformatting its acclaimed dynamic fingerprint so that EV sports cars can deliver deeper and more meaningful driving experiences that genuinely appeal to people like us. 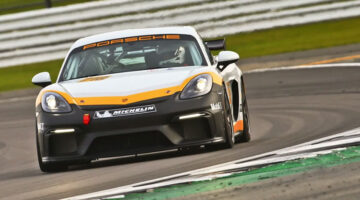