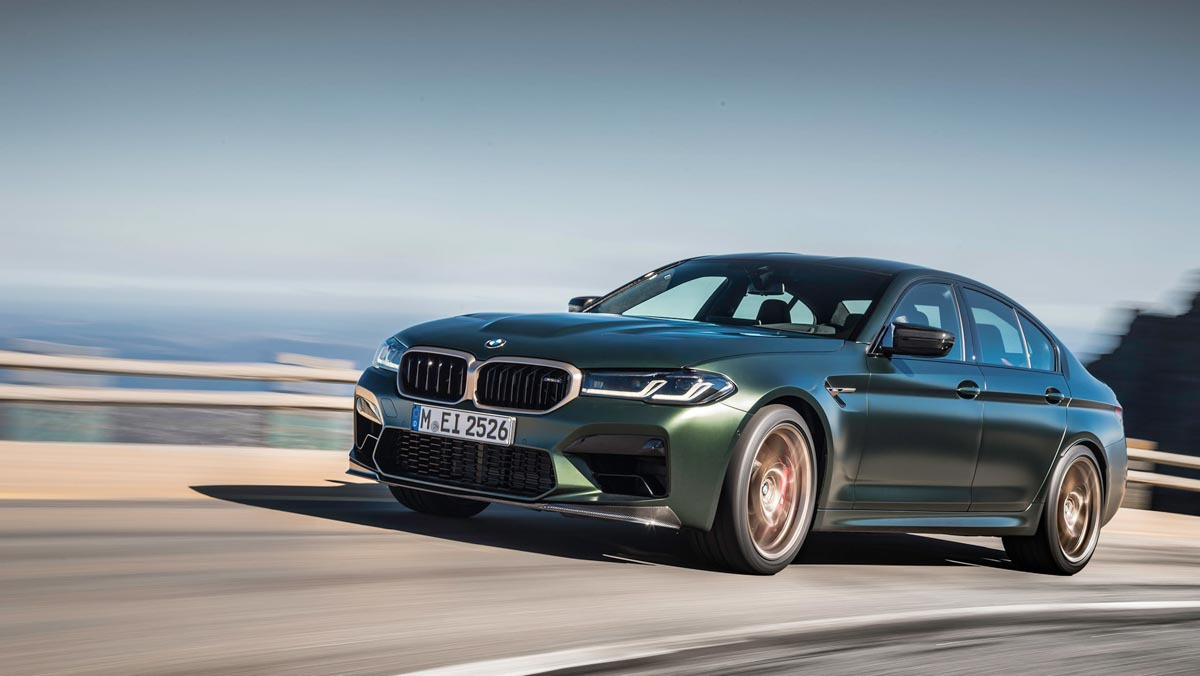 BMW has revealed its first ever M5 CS: a faster, lighter and more aggressive addition to the M5 range. At $193,601, it’s a hefty $55k more than the Competition on which it is based, but like other CS models it comes with a spread of bespoke components and a new set-up, promising the most focused driving experience at the top of BMW’s M range.

The CS’s 4.4-litre twin-turbocharged V8 is shared with the M5 Competition, but now rated to 626bhp, 10bhp more than before. While this compares favourably to the AMG E63 S’s 603bhp, it’s still 45lb ft down on torque, with a familiar peak of 553lb ft between 1950-5950rpm. The CS is faster than all of its rivals against the stopwatch, however, with BMW quoting a 0-100kph time of 3sec dead, four-tenths ahead of the AMG, and three-tenths quicker than the M5 Competition. It’ll also crack 0-200kph in 10.4sec and go on to a top speed of 304kph.

This advantage in performance data is due, in part, to the CS’s relative lack of weight compared to rivals. BMW quotes a 70kg saving over a standard M5 Competition, placing the CS at a tad over 1900kg. This compares favourably to the Mercedes, which straddles 2 tons depending on specification. This weight saving is derived through the use of carbonfibre for some of the exterior components such as the new bonnet, which is also visually obvious from its large, aggressive power dome and reverse-angle vents.

Similar attention has been paid to the interior, but not to quite the extreme seen in other CS models from the M division. Carbonfibre bucket seats are borrowed from the new M3 and M4 Competitions, and the rear bench is of a bespoke design. The interior also features extended use of carbonfibre trim on the doors and dash, while Alcantara features on the dash, steering wheel and roof lining. Larger, carbonfibre gearshift paddles have also been borrowed from the new M3/4 Competition.

Also part of the M5 CS package are a set of carbon-ceramic brakes, gripped by six-piston calipers on the front axle and contributing 27kg to the total 70kg weight loss. The CS’s forged 20-inch wheels are similar to those on the M5 Competition, albeit in a soft bronze finish, and are wrapped in Pirelli P Zero Corsa rubber. The coil-spring suspension is also a bespoke, sitting the car 7mm lower than the Competition and using the uprated adaptive dampers as found on the M8 Gran Coupe.

The CS can also be identified from the outside by its bronze-finished grille and side strakes, and matt Forest Green paintwork, although two other paint finishes are available. Perhaps the most striking visual change are the bespoke headlights, in which the daytime-running elements glow a motorsport-inspired yellow when the dipped beam is switched on. These return to white when the sidelights or pure DRL selection is active due to legislation.

Like other CS models, the M5 CS’s production run isn’t limited to a designated number of units. Instead it will be built for the remainder of F90 M5 production alongside the Competition. While it has no direct rivals in traditional saloon form, it is priced right alongside the new Porsche Panamera Turbo S and Mercedes-AMG GT63 S, both of which will also match it on power, performance and prestige.