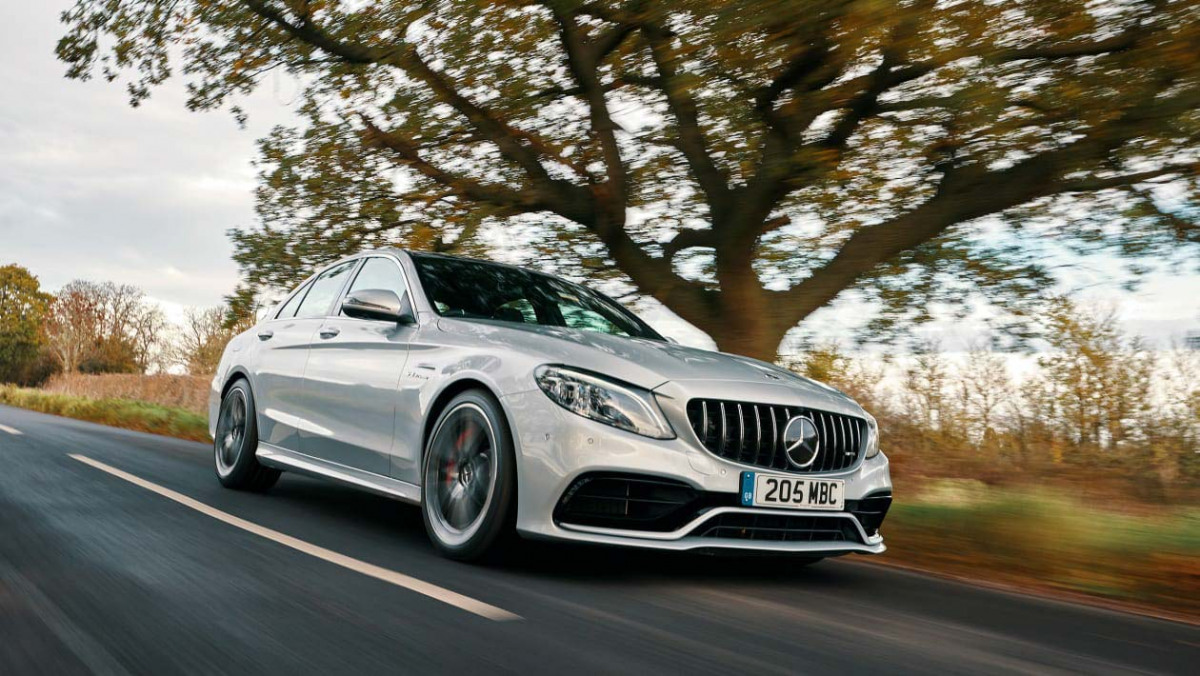 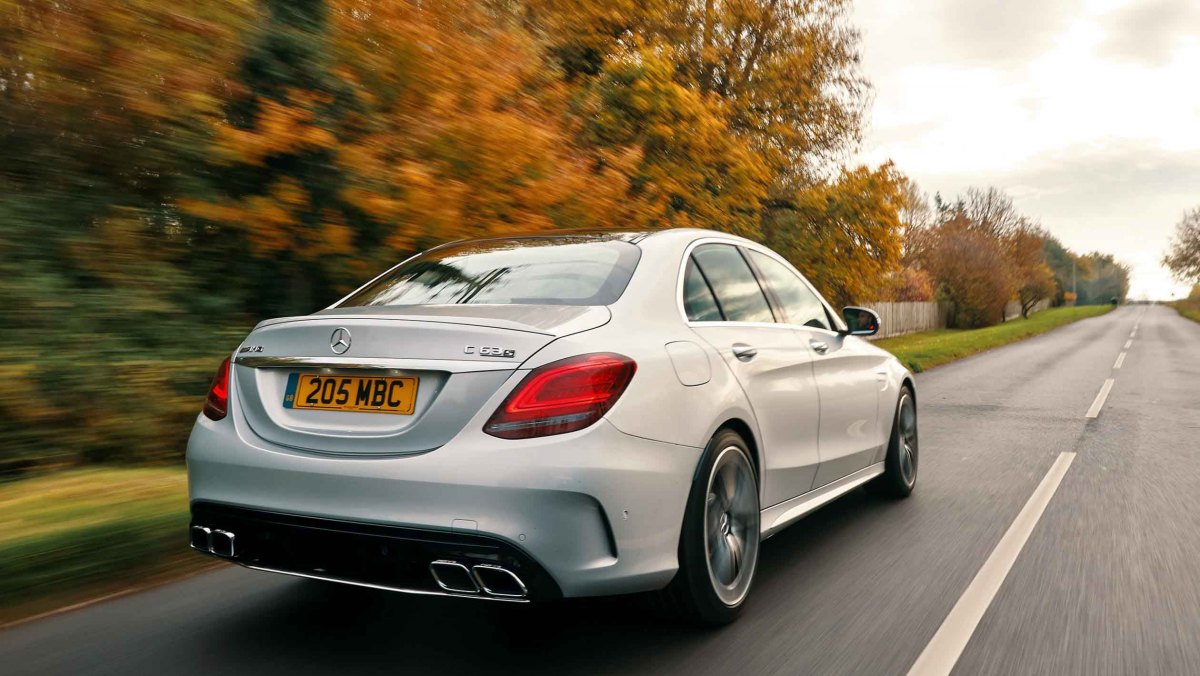 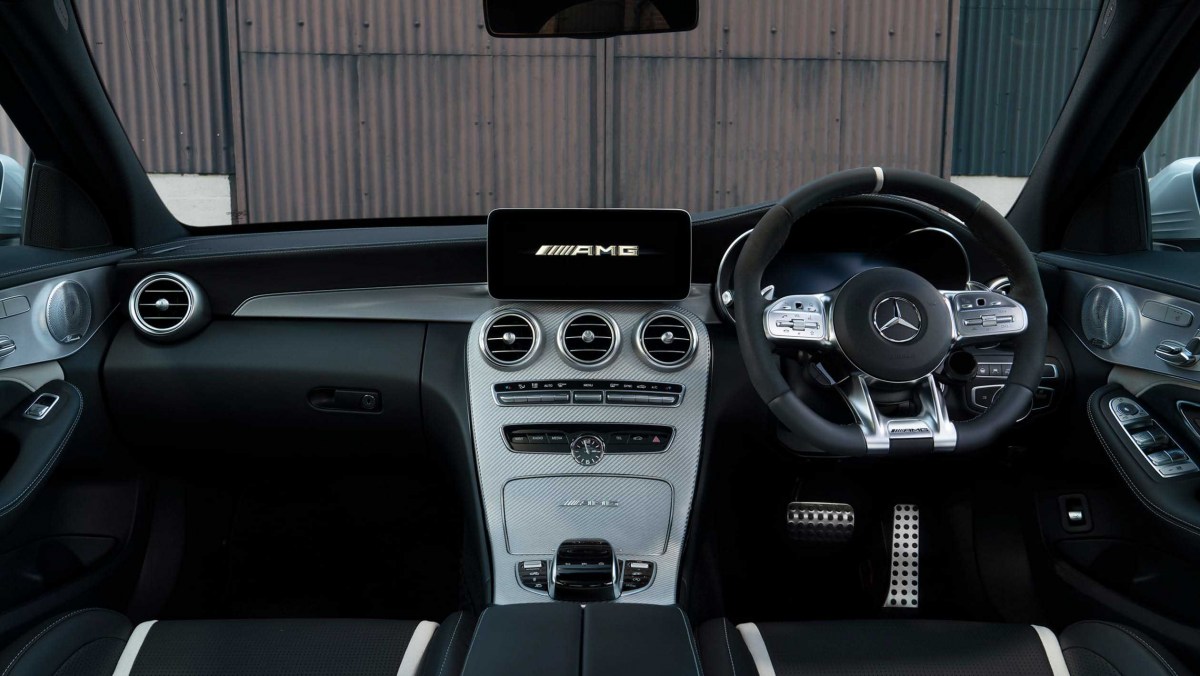 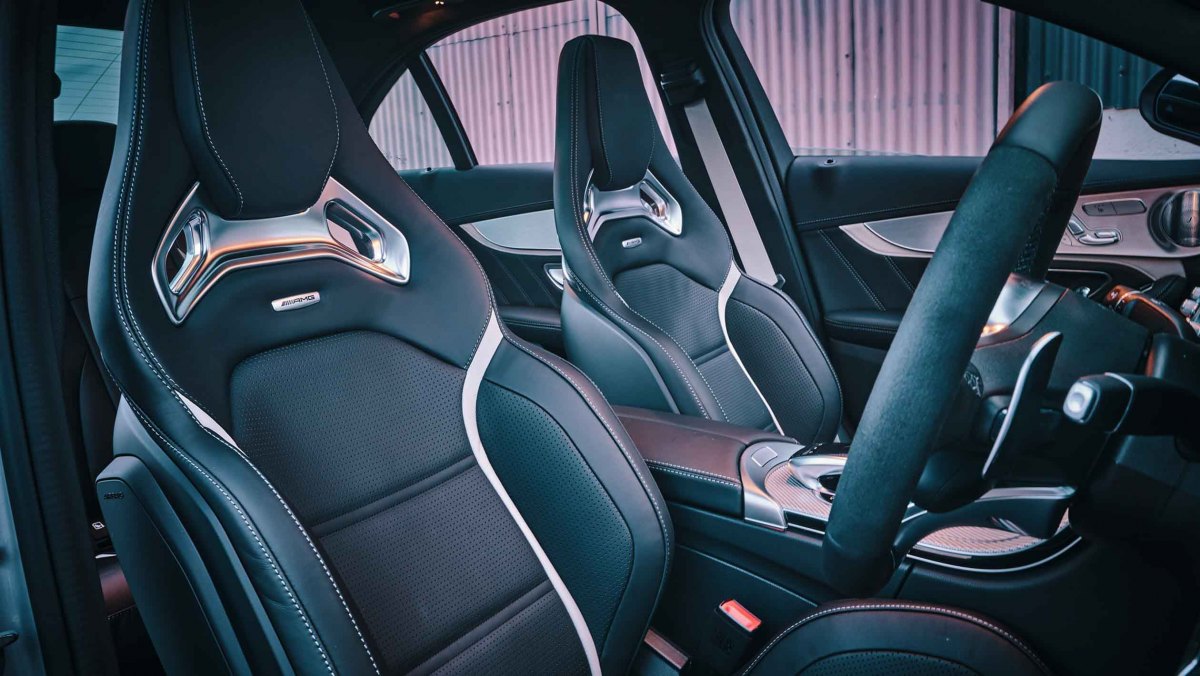 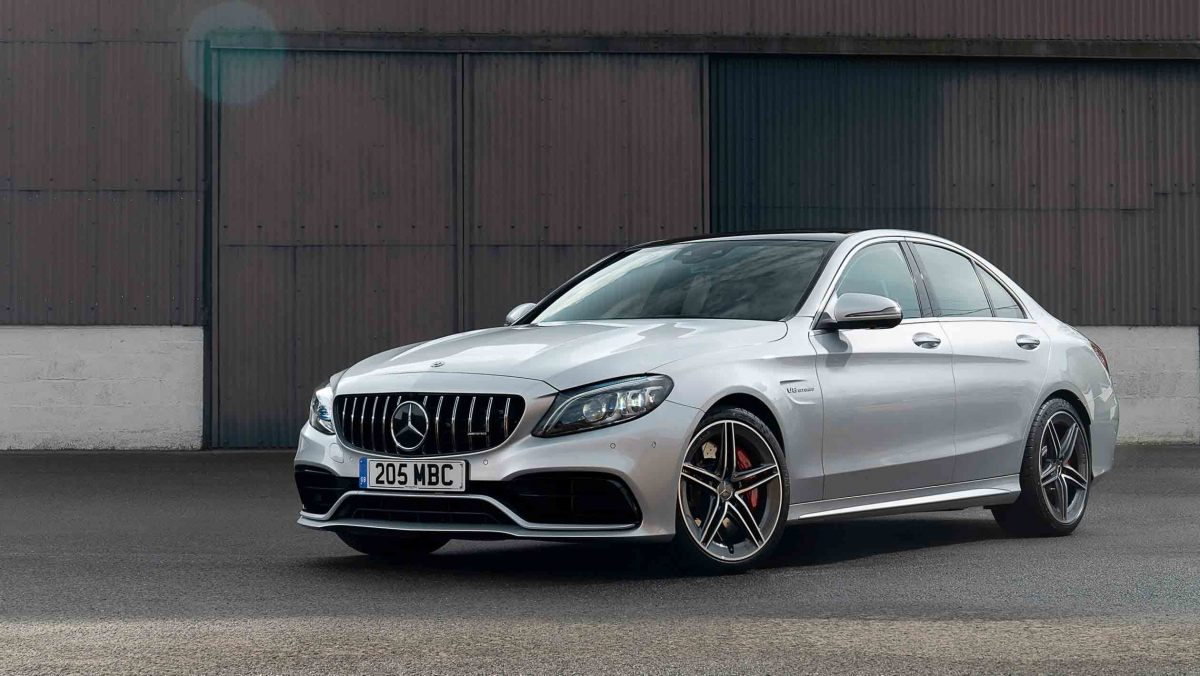 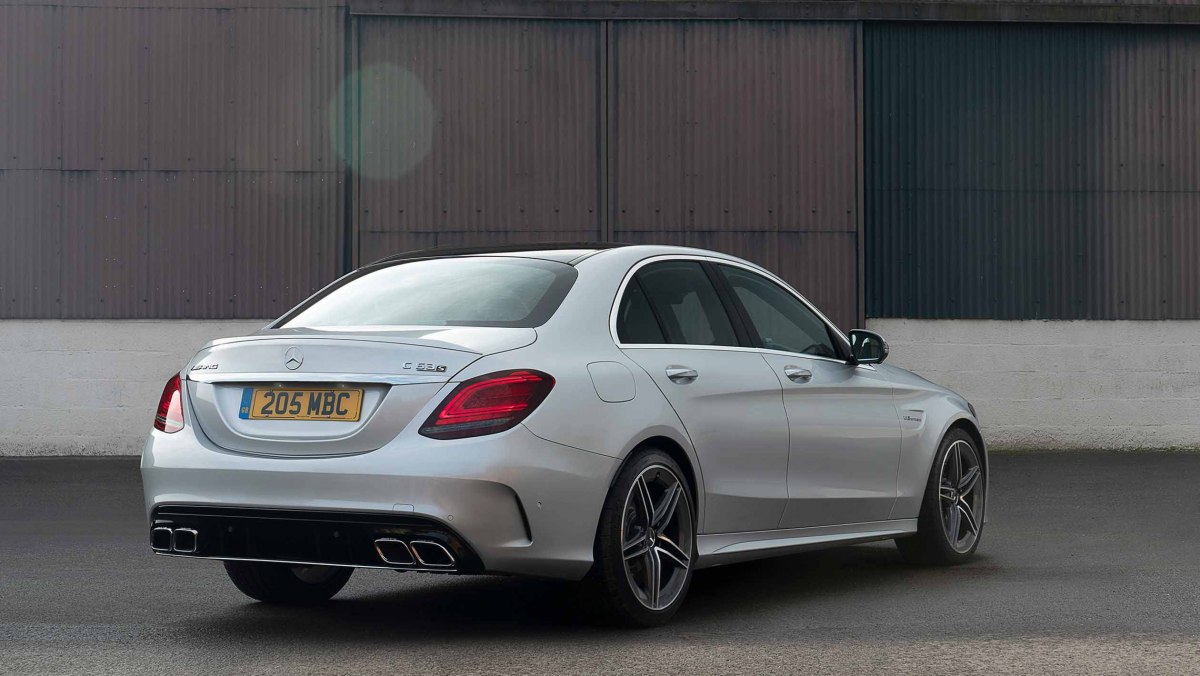 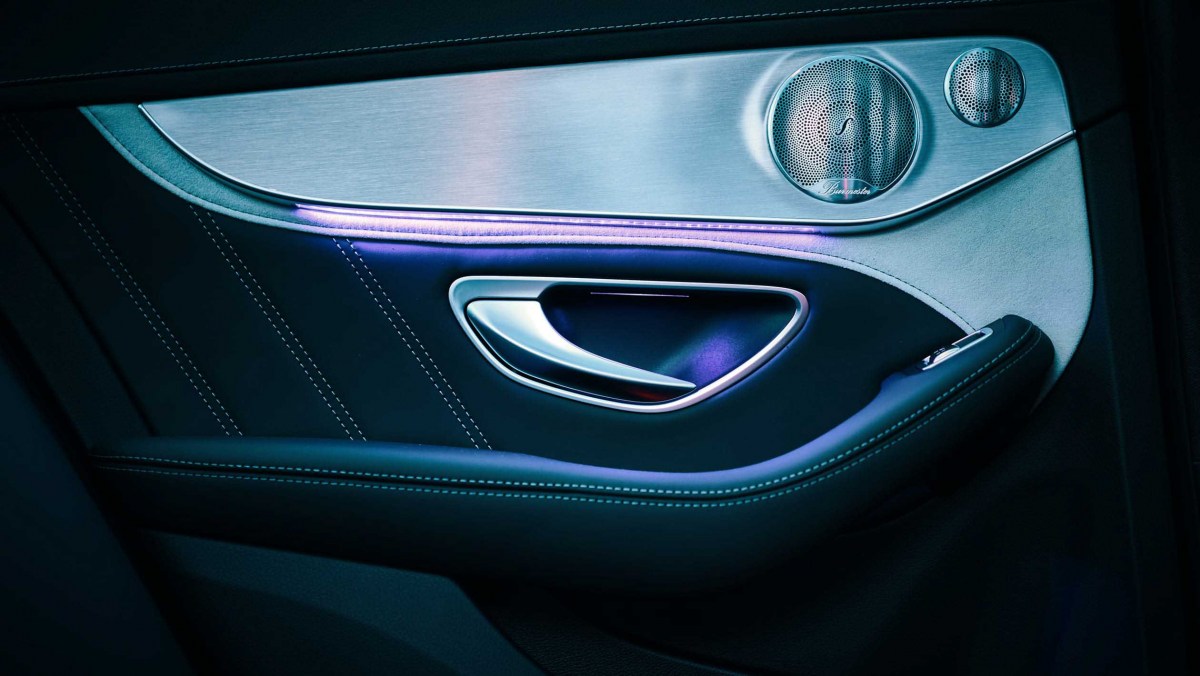 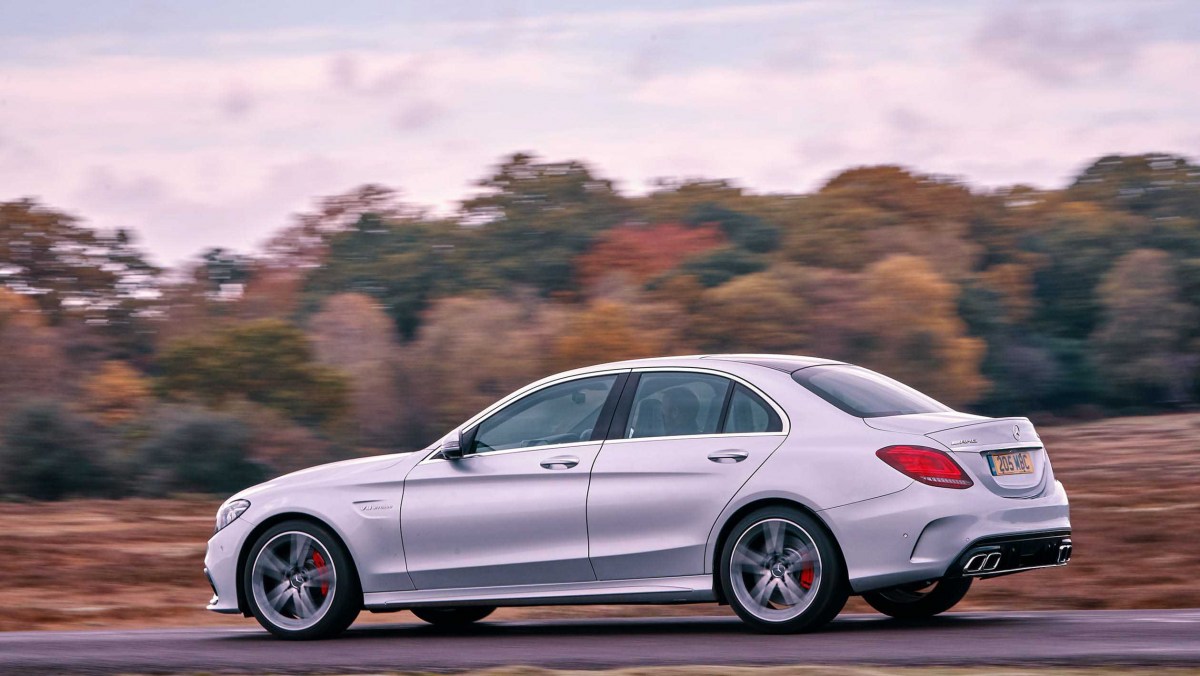 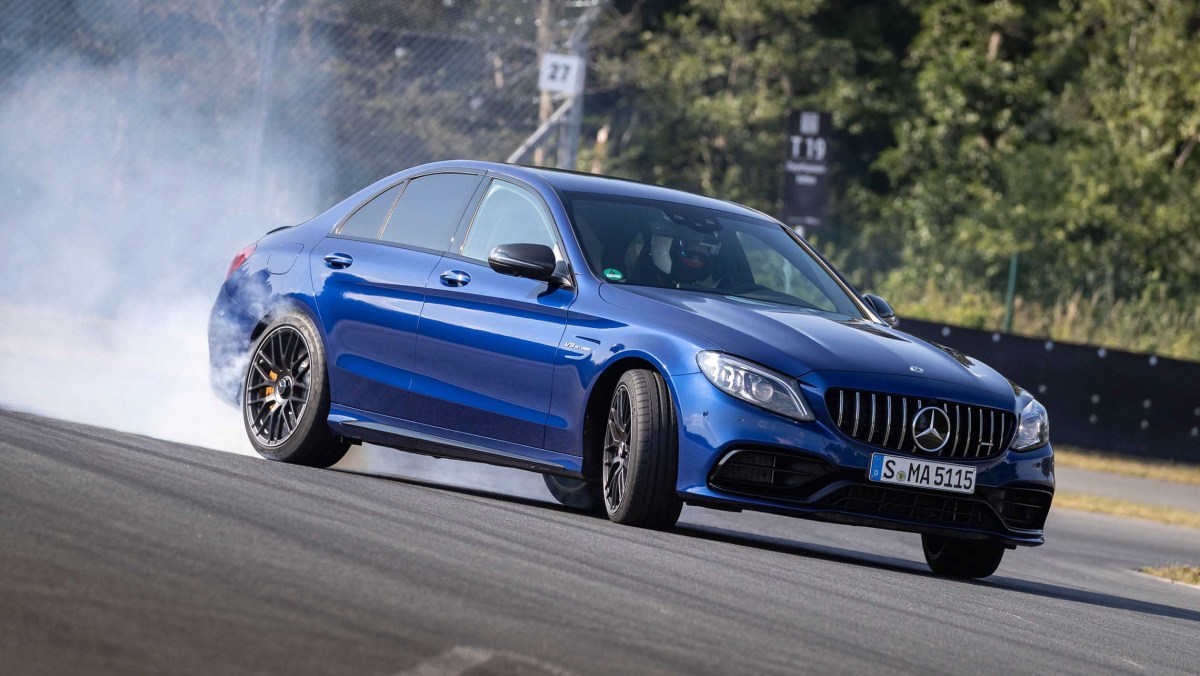 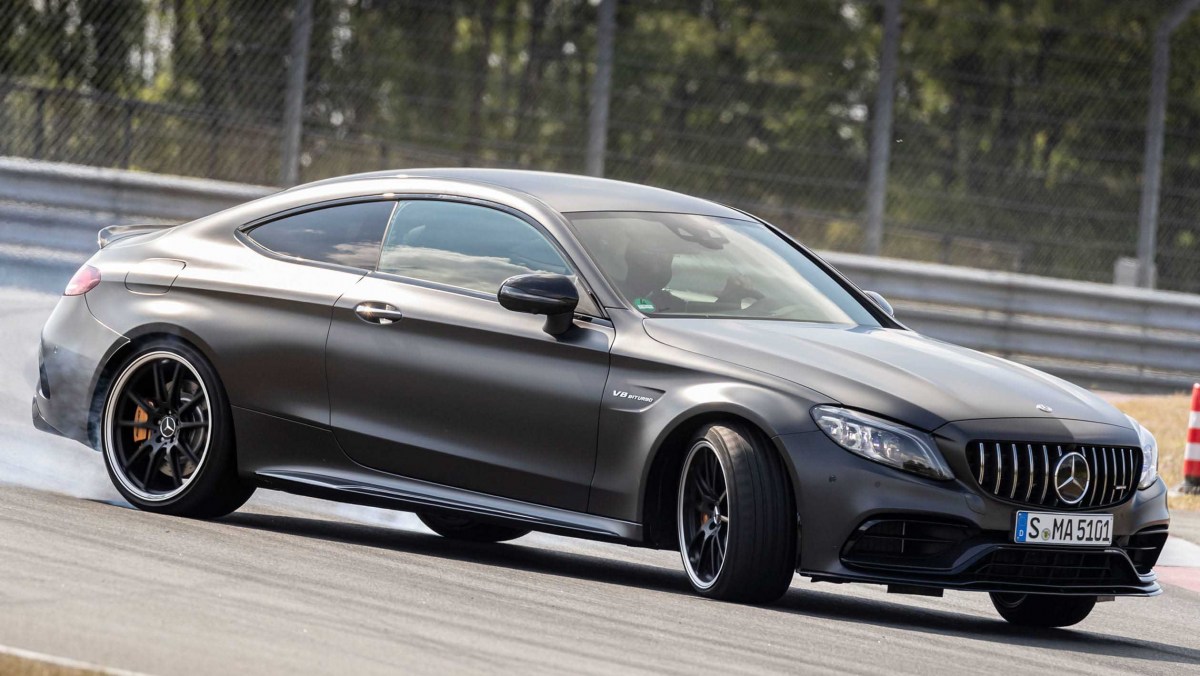 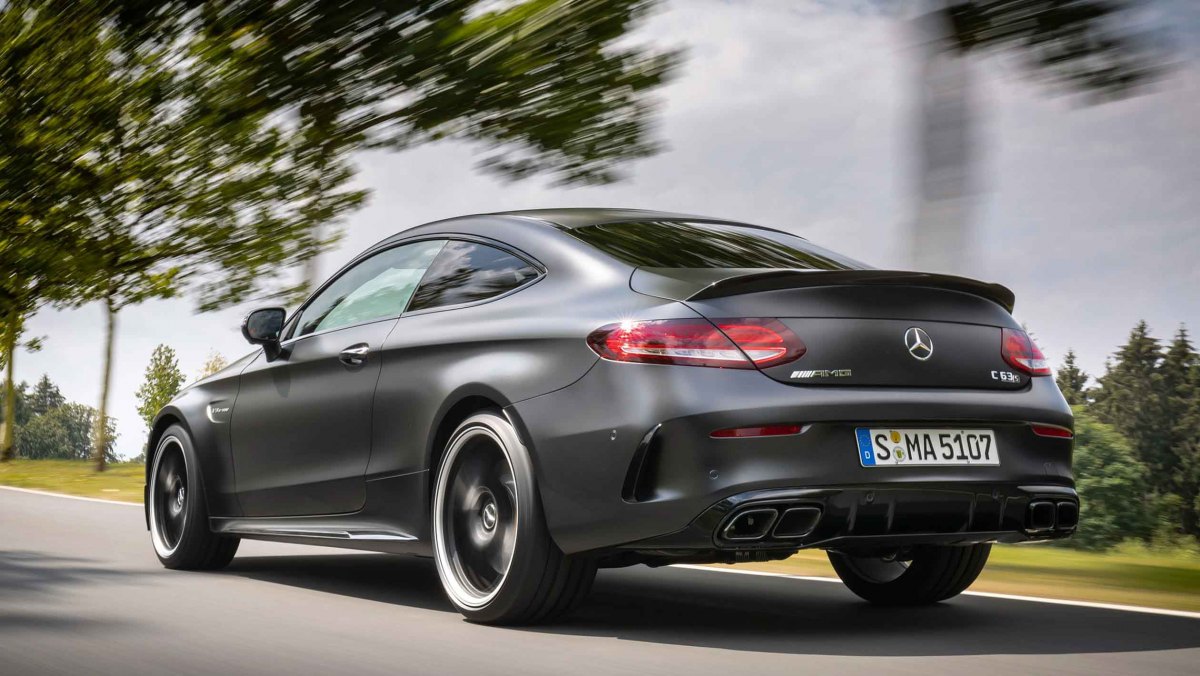 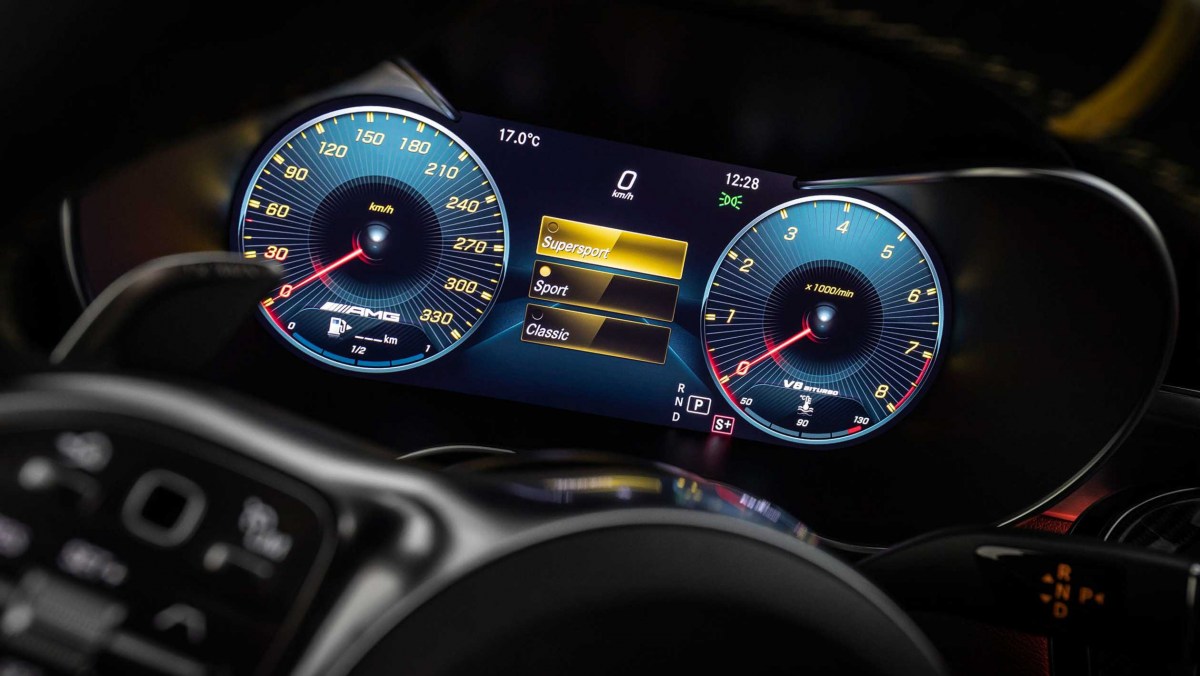 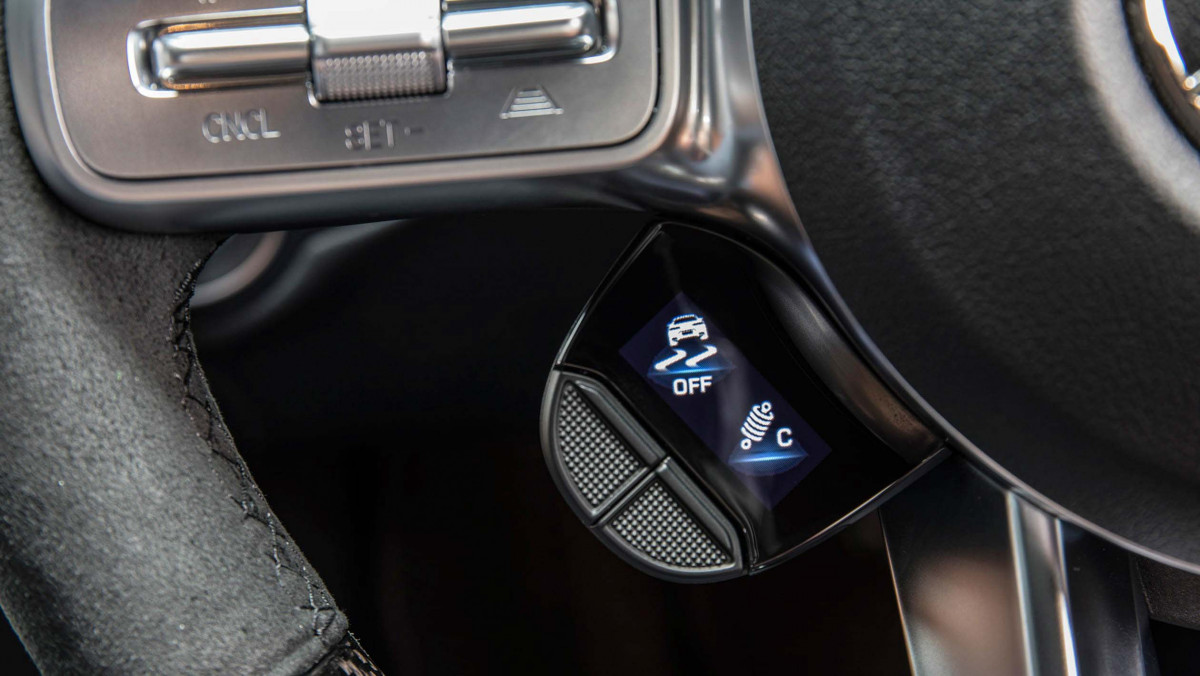 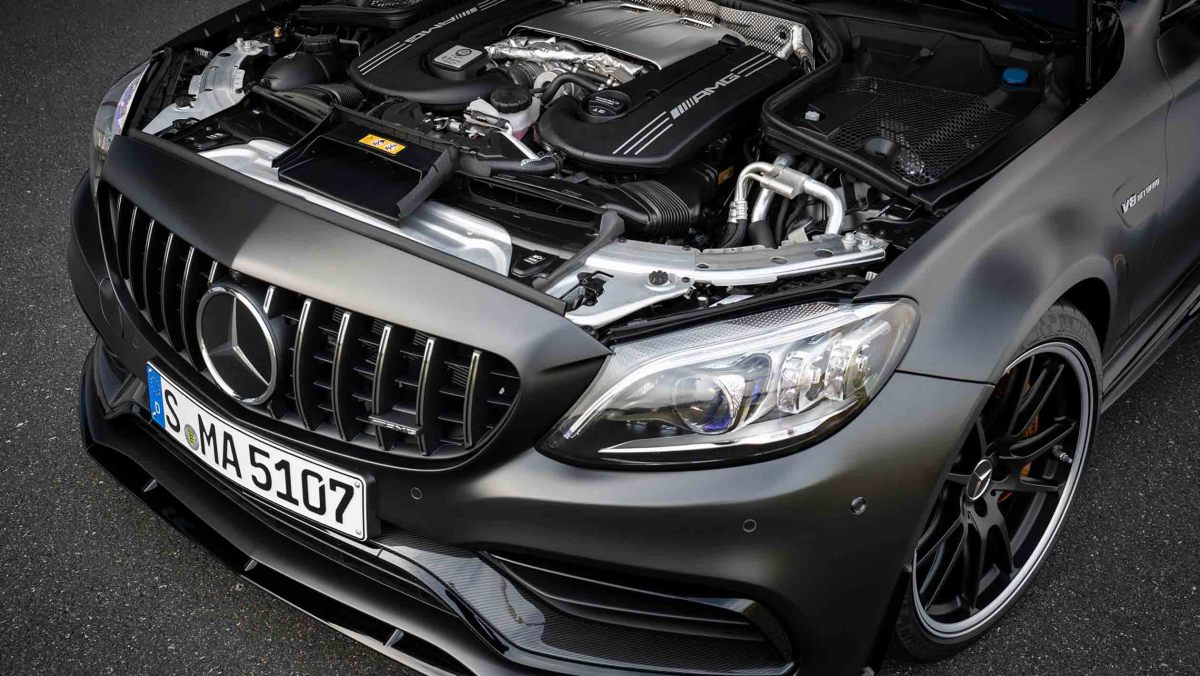 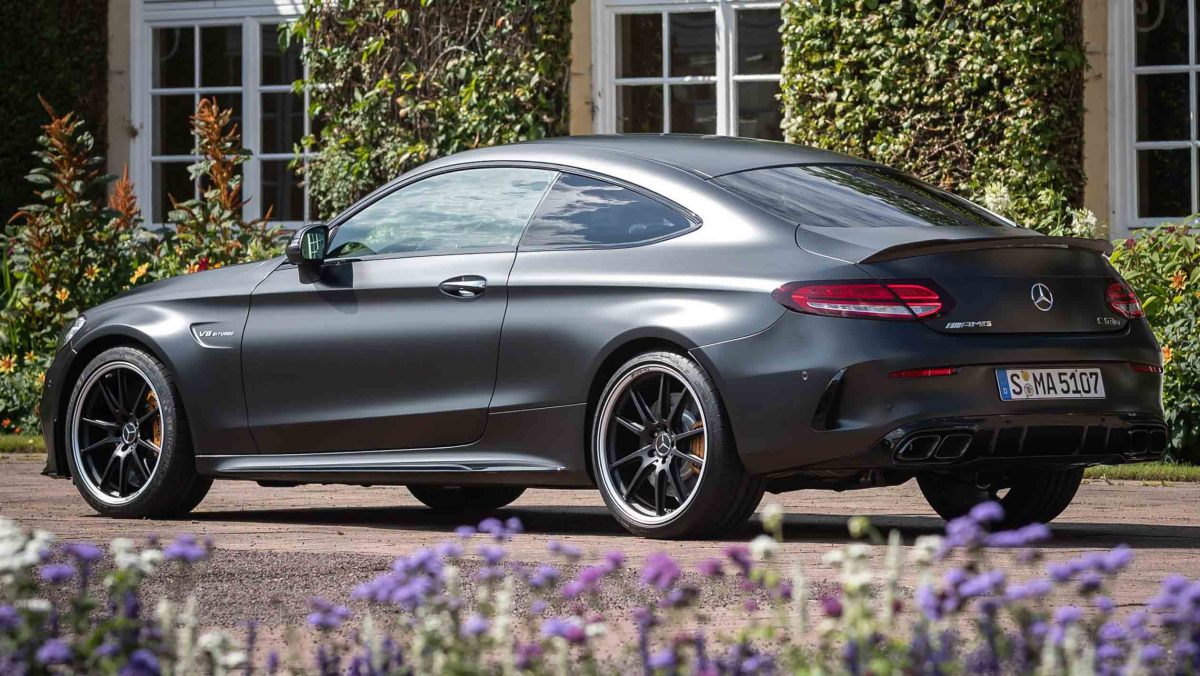 We rather like the Mercedes-AMG C63 S. Though 2015 saw the loss of the glorious M156 naturally-aspirated 6.2-litre V8, the current model’s torque-heavy turbocharged unit, hard-as-nails character and steely eyed focus on performance and driver thrills remained, and has endeared the line-up to us all at evo.

The full-fat C-class has seen an extensive change to its model positioning since its debut, ditching its lesser non-S forms and experiencing a hefty price rise along the way, but its specification has never been more comprehensive to compensate.

Time moves quickly though, and while the C63 S held its title as the most powerful compact sports saloon for a time, its six-cylinder rivals from Alfa Romeo and now BMW have it matched – and sit within some very chassis’ to boot.

Is there a performance engine used in more applications than AMG’s 4-litre V8? I ran out of digits after I’d counted 20 models the twin-turbocharged engine is fitted to. This includes anything from the two-seater GT R, a five-metre plus long limo (S63), roadsters, coupes, saloon and estates, seven-seat SUVs and, of course, the G wagen.

All C63 models are fitted with a nine-speed AMG Speedshift MCT auto, now with a wet-clutch instead of the torque converter in the old seven-speed. Not only is the new ‘box lighter but it also benefits from quicker response times under acceleration. In manual mode you can blissfully hit the engine’s limiter with the ‘box refusing to change up until you’ve flicked the right-hand paddle. And an electronic limited-slip diff is fitted to all models, regardless of engine output.

The quickest of the refreshed C63 range is the Coupe, reaching 100kph in 3.9sec and limited to 290kph. The saloon takes a further 0.1sec, with the S Estate and Cabriolet a further tenth behind at 4.1sec.

AMG Ride Control is standard and combines steel springs with adaptive dampers that can be configured as thus: Comfort, Sport and Sport+. And finally (stop cheering at the back), it gets dynamic engine mounts as standard.

Inside the changes are a little less comprehensive. There’s a new 12.3-inch digital display for the instrument cluster and a 10.5-inch display for the infotainment system which includes access to AMG Track Pace – an on board data logger for you frustrated Lewis Hamiltons. There’s also a complex AMG steering wheel featuring touchpad controls first seen on an S-class and mode controllers that integrate their own tiny screens.

A result of the C63 S’s more focused nature is its harder-edged approach to dynamics. It’s not harsh for the sake of it, every tight damper movement allowing for more commitment and a greater depth of connection between the fleshy bit behind the wheel and, well, the wheels themselves. On the car’s international launch in Germany we came away with a fear that the billiard-table smooth test roads were masking a brittle ride and solid chassis. Thankfully that’s not the case. Yes, a C63 S is firmer than the F80 M3 and Audi’s RS4, but the pay-off is a far more naturally reacting car.

There’s an alertness to the steering that’s missing in some rivals, with the front tyres hooking up early and allowing the rear axle to provide the shove out of the corner. With AMG’s nine-stage traction control (taken from the AMG GT R and a system that requires time to explore and experiment with to find your perfect set-up) the attitude and the angle the rear axle can take through and out of the corner is all down to you and how friendly you want to be with your local tyre fitter. Gratuitous oversteer aside, the new TC system does allow you to tailor the C63’s dynamics to suit your preferred driving style, adding an additional layer of detail to its behaviour. It’s one of those rare pieces of technology that adds more to the driving experience that it removes.

There are two obvious omissions, however, as the C63 S in any form still lacks the final layer of alacrity and alertness that makes our two favourite sports saloons so brilliant in any conditions. The Alfa Romeo Giulia Quadrifoglio’s supercar-like responses and superb chassis make the 63 feel lumpen and lazy by ultimate comparison, while BMW’s new M3 Competition takes a more brutish, if no less sophisticated approach. Despite the Alfa’s equivalent age, it still has the C63 S licked for outright enjoyment while the new M3 is without doubt the step-change forward befitting its all-new underpinnings. How will AMG respond with its next C63? Rumor has it the V8 will be left behind, but unlike BMW and Alfa the answer doesn’t lie with a six-cylinder…

Entry-point to AMG C63 ownership starts at $105,505 for the C63 S saloon, while the Coupe S will set you back in the region of $113,000 – the more practical C63 S Estate will set you back from $107,210. All local market C63s are the S variant, with more power and features such as an electronically controlled limited slip differential. There are two option packages available, comprising a Premium Plus Package for $4850 that bundles elements like a panoramic roof, Burmester hifi and electric seats, and a further Carbon elements pack.

Direct rivals include the new $108k BMW M3 Competition, which really has taken the game up a notch, and if two rather than four-doors takes your fancy, the M4 Competition is also available for a touch more cash at $110k.

Alfa’s Giulia Quadrifoglio by comparison feels like a resolute bargain, starting at ‘just’ $96,605, and while it still does lack the polish and quality of its German rivals, hits back with a driving experience that’s arguably even more rambunctious and entertaining.

Audi’s six-cylinder RS4 Avant costs $90,475, with its RS5 coupe and Sportback siblings both costing from $97,300, yet the Audi’s 444bhp is feeling particularly behind the curve at the moment, but it does do the GT thing better than any of its more focused rivals.

Leaving Germany for a moment, there is also Lexus’s rather splendid $127,660 RC F coupe, a leftfield choice but one with the most charismatic engine of the lot and an unexpectedly sweet chassis, too.