Two cylinders and a turbo down on its predecessor, the C43 still has it where it counts 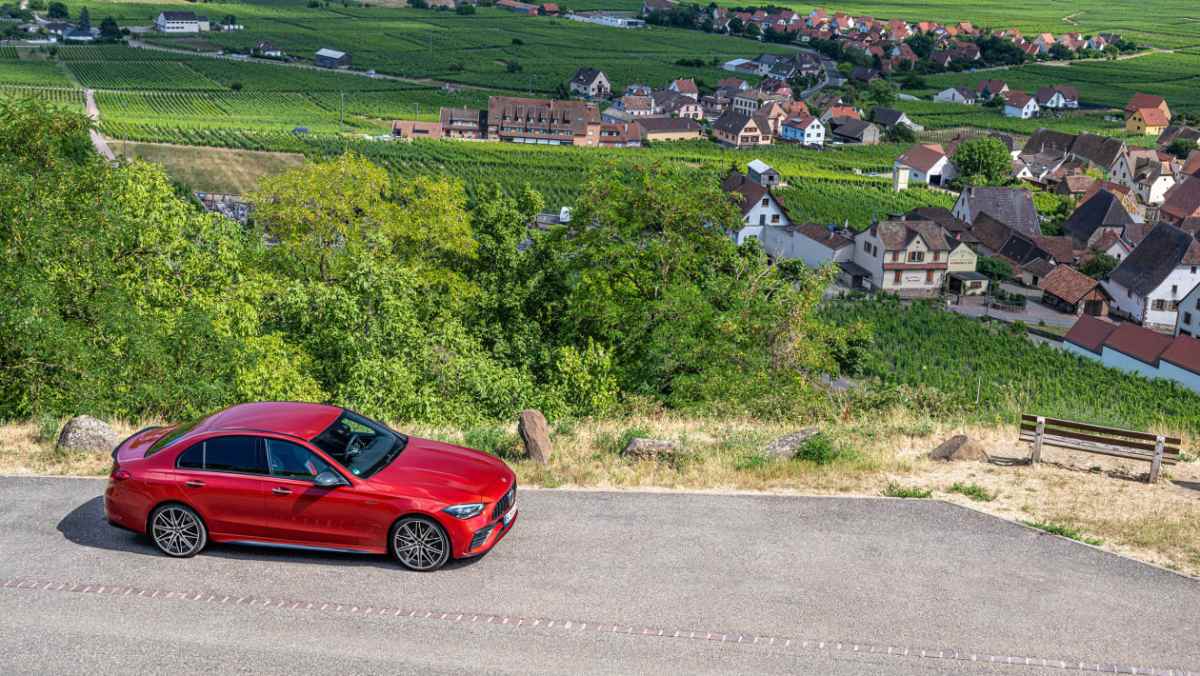 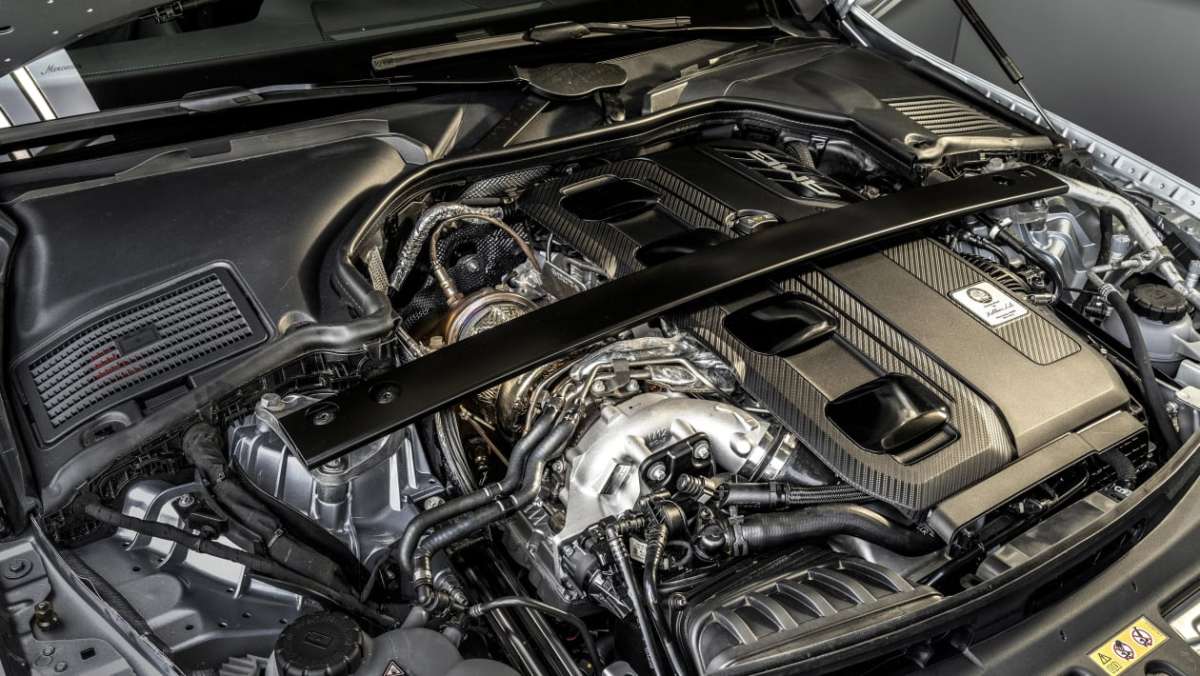 Run a finger down the spec sheet and you know straight away that the new Mercedes-AMG C43 4Matic is a step-change reboot of the model it replaces, not just benefitting from the advances introduced with the sixth generation C-class but also treated to a new downsized four-cylinder/electric turbo powertrain incorporating a dash of proven Mercedes-AMG Petronas F1 tech.

There’s a big on-paper pay-off, though, as power leaps from the previous twin-turbo V6-engined C43’s 385bhp to 402bhp, assisted by 369lb ft which is, admittedly, 15lb ft down on before. It means the new C43, despite its two cylinder and one turbo deficit, shadows the 4.5sec 0-100kph time of its predecessor, posting a claimed 4.6sec for the saloon, 4.7sec for the estate. Opt for the AMG Driver’s Package and you can have more top speed, too, the electronic limiter eased out to 265kph instead of the regular 250kph.

All is possible thanks to a new mild-hybrid edition of the M139 in-line four first seen in the A45 S. It’s billed as the world’s first series-production engine to be turbocharged with an electric exhaust gas-driven turbocharger. Its USP is a compact motor that gives up to 8bhp of assistance and can spin up to a dizzying 175,000rpm. The little motor also assists boost when there’s insufficient exhaust flow to do the job, mitigating potential lag. And in the C43’s punchier dynamic modes it can do the whole anti-lag thing with full clever stuff certification. It’s a system, AMG is keen to announce, derived from its F1 measures to ensure Lewis and George at least have spontaneous throttle response.

The M139l engine, as it’s known when mounted longitudinally, made its debut in the AMG SL43 and incorporates its Garrett turbo in a 48-volt electrical architecture that also feeds a belt-driven starter generator (RSG) which can lend an additional 13bhp for brief periods under full load and, naturally, during Race Mode launches. The nine-speed auto, or AMG Speedshift MCT 9G as Merc likes to call it, uses a wet clutch rather than a torque converter to get things rolling while saving weight at the same time. The 4Matic four-wheel drive system, meanwhile, has a fixed 31:69 front/rear torque split to promote chassis neutrality and responsible skidding on track, assets further exploited by active dampers and rear-wheel steering to help sharpen up turn in.

From a distance, the C43 looks like a regular C-Class. The signifiers are hardly radical, amounting to subtly kicked out sills, a bootlid lip spoiler and a few ornamental strakes on the radiator grille. Oh, and the quad, tail pipes are set into an ‘emphasising’ trim panel. Inside, it’s the usual recipe of vastly adjustable driving position, great seats with proper lateral support, two colourful display panels and a steering wheel festooned with function buttons.

Too many to become chummy with on an afternoon’s drive taking in the scenic roads around the Swiss/French border, but it’s the steering that snags my attention as we head out. It has the most synthetic feel I think I’ve ever encountered, and that’s saying something these days. Direct and accurate, yes, but the weighting feels like a set spring resistance either side of dead centre. If it’s a consequence of rear steer, I’d happily do without it. Disconcerting, to begin with at least.

As is the too frequent transmission shift jiggle between first and second going up or down the ‘box at lowish speeds, a rude collapse of the drivetrain’s otherwise exemplary seamlessness. From there on, though, it’s mostly all good news and if you simply want to cover ground at a serious pace, it’s exceptional. Only four cylinders maybe, but as a doer the engine has a strong, wide and tremendously linear powerband extending to a 7000rpm redline, operating within a dynamic envelope of scarcely believable security, if at the expense of a cosseting ride. Again, this is an AMG: we’re talking levels of firmness and control, whatever dynamic mode is chosen.

There’s a ton of grip to play with, though play is probably the wrong word. That rear-bias torque split and rear wheel steering look more enticing than they feel, outside of a track setting anyway. But if you want something that goes where you point it, almost irrespective of how hard you’re pushing, the C43 has skills to flatter. Understeer is effectively nullified. Go into a tight bend too hot and the nose doesn’t run crudely wide, the car collegiately sloughing off speed all of a piece, getting back on the right line at the right angle to pick up the pace again as if nothing happened.

And pick up the pace you will. Throttle response is as immediate and precise as promised, the turbo’s contribution as stealthy as it is substantial. And if the engine doesn’t sound half as good as V8 AMGs of yore, it does sound at least half decent, unerringly smooth at a cruise with a mildly angry induction note swelling in unison with the angle of the accelerator pedal. If you prefer a little less conversation to go with the ramped-up action, a louder, digitally enhanced soundtrack can be ushered into the cabin via the stereo system’s speakers. Still pretty reserved, though.

Mercedes-AMG isn’t alone in having to reinvent itself. Times are changing. But the once presumed conflict between saving the planet and going fast has simply failed to materialise. Performance, far from being the sacrificial lamb, has got its second coming. If the new, greener C43 isn’t as emotionally rewarding as its twin-turbo predecessor, in matters of motion, there is no sacrifice.

Mercedes has yet to reveal local prices, but given it has direct rivals from both its German rivals, we’d suggest they’ll align themselves despite the reduction in cylinder count. BMW’s recently updated M340i starts at $59,120, and does a fine job of being a fast compact executive with just enough dynamic bite to justify its M Performance branding.

Audi’s diesel-powered S4 TDI will cost you a little less at $54,625, but despite the huge mid-range performance on tap isn’t half as interesting to drive as its petrol-powered predecessors – remember when the S4 had a naturally aspirated V8 and a manual transmission? If you’re looking for something fast but with a bit more eco-focus, Peugeot’s striking 508 PSE costs just under $59,360 and has no less than three electric motors to help things along, but its outputs are a little lower than the Germans, not to mention its resale values.