As exciting as the AMG GT R coupe, but does come with the usual convertible compromises 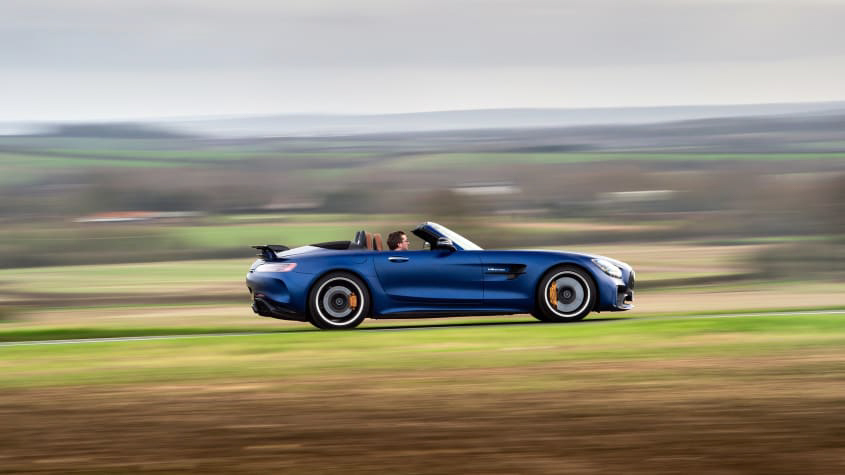 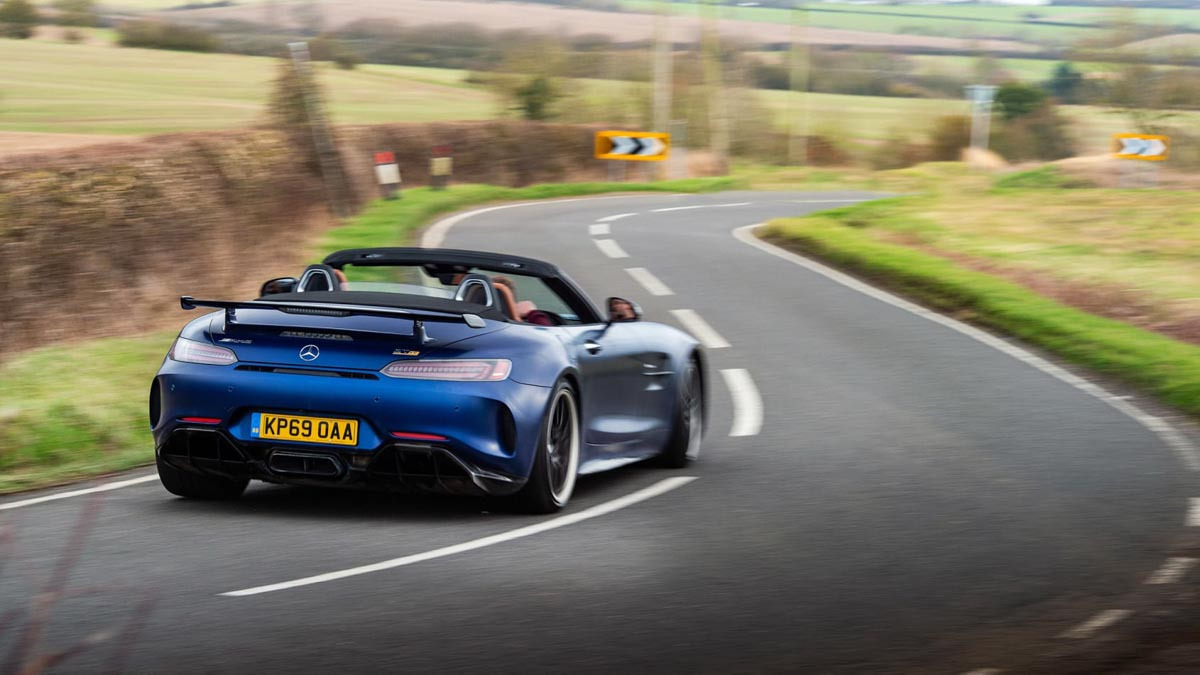 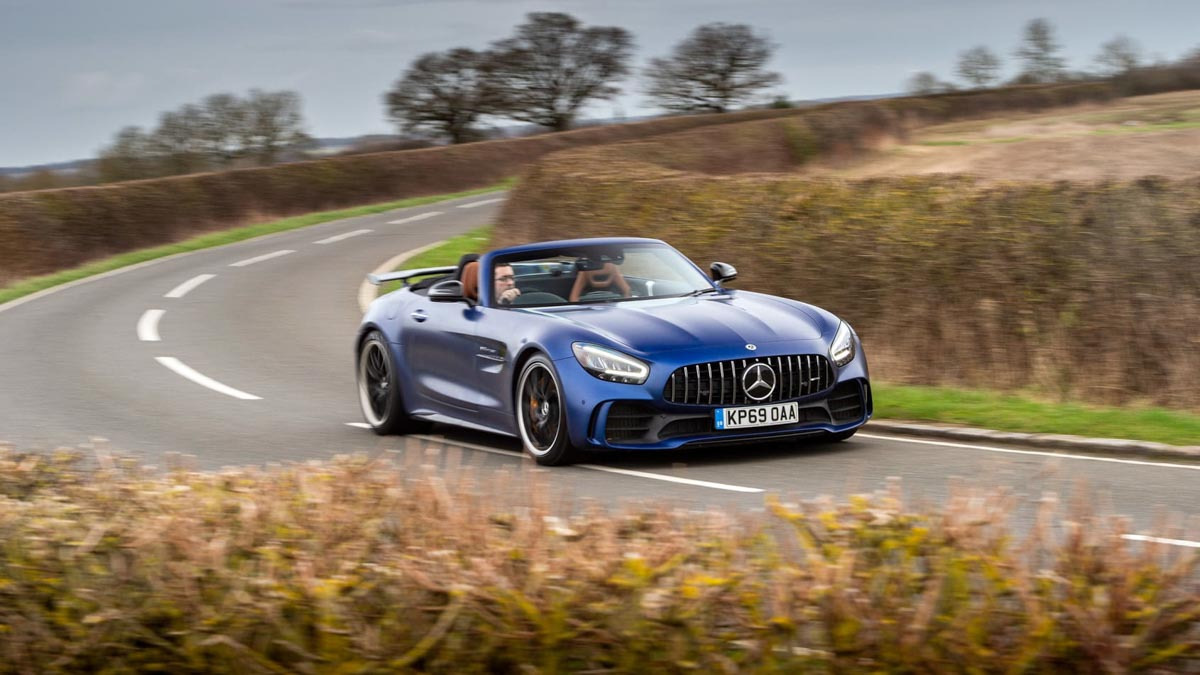 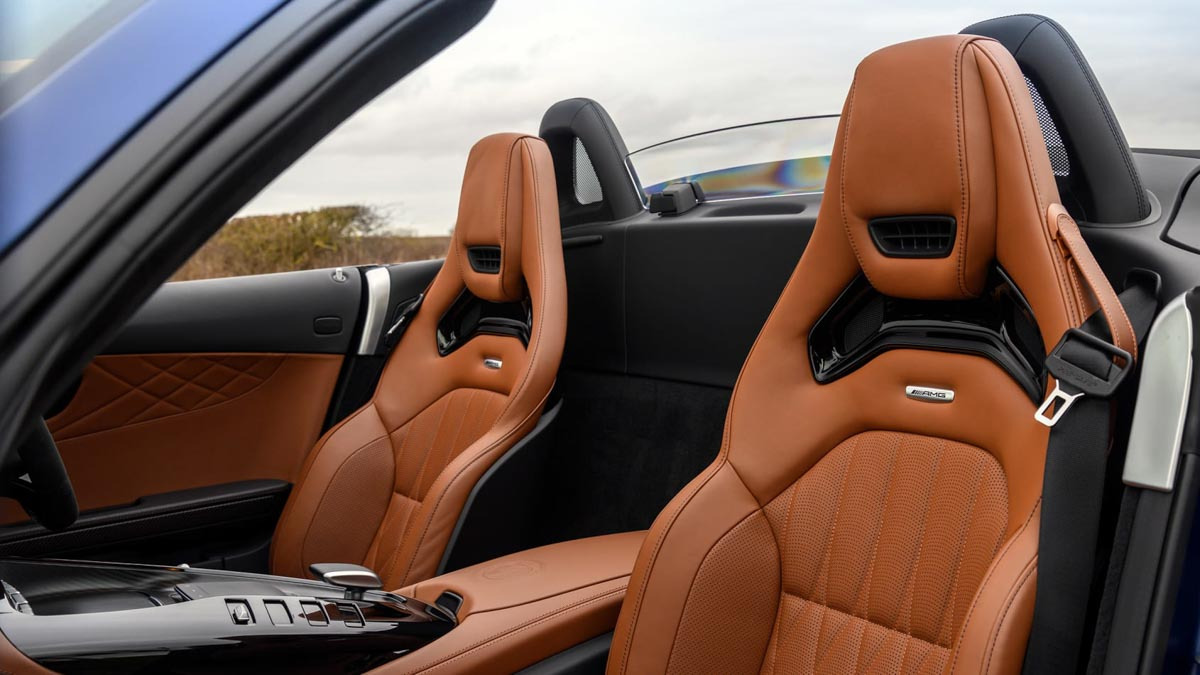 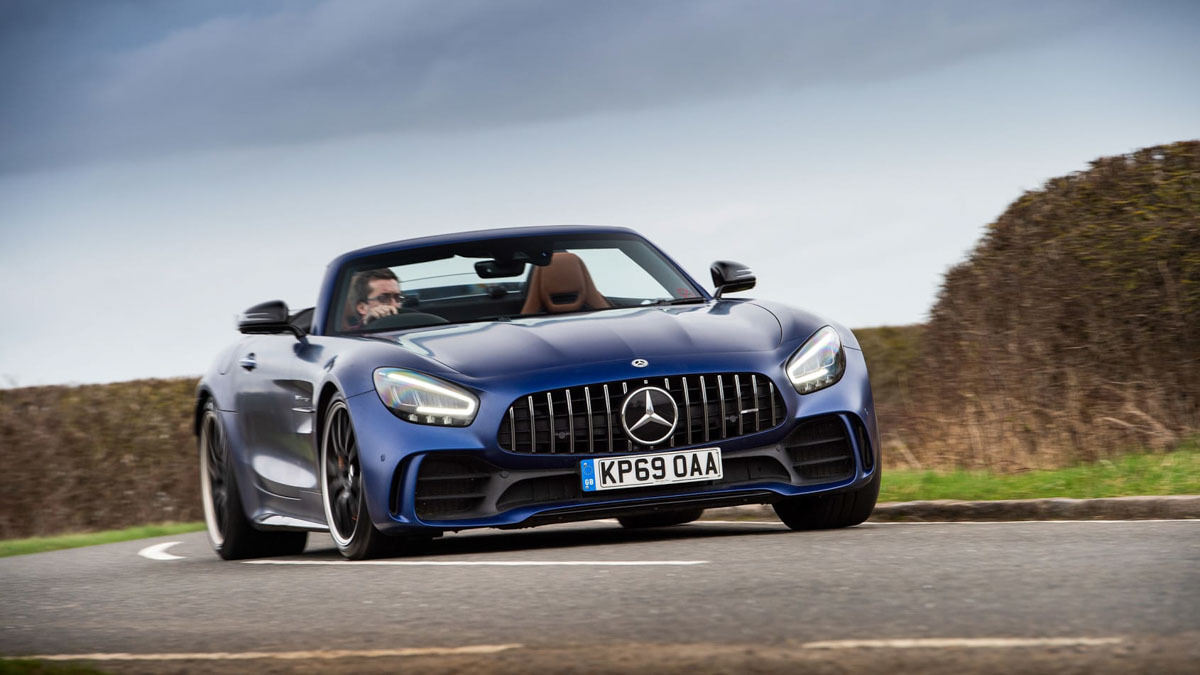 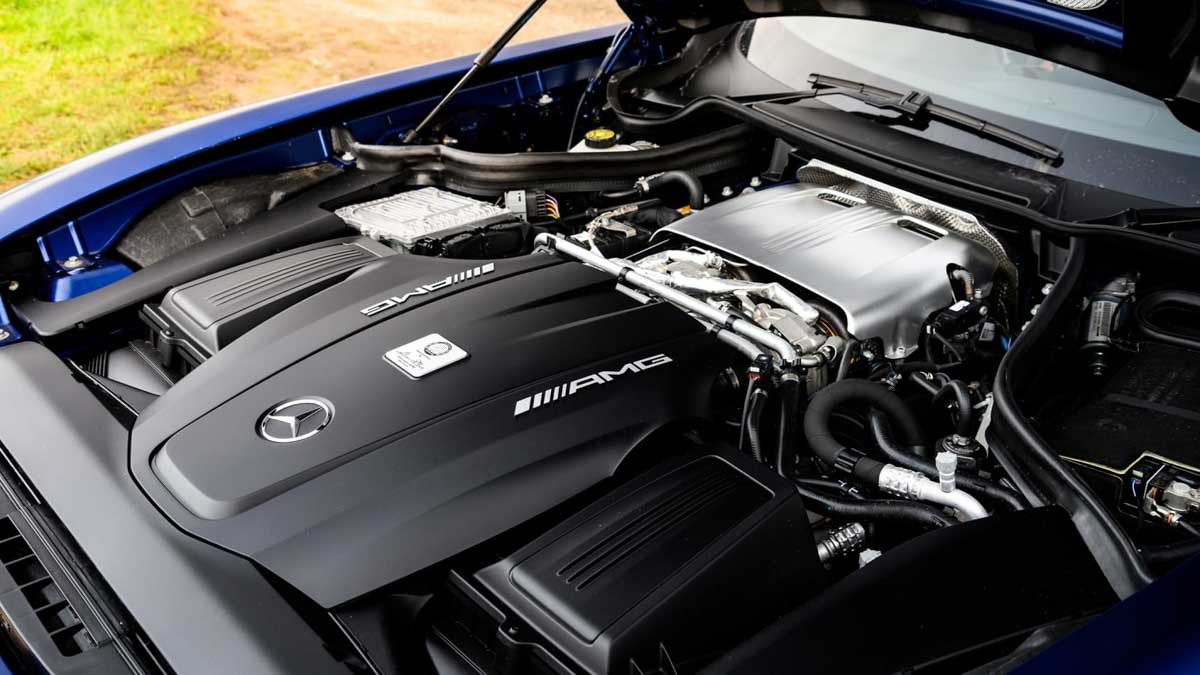 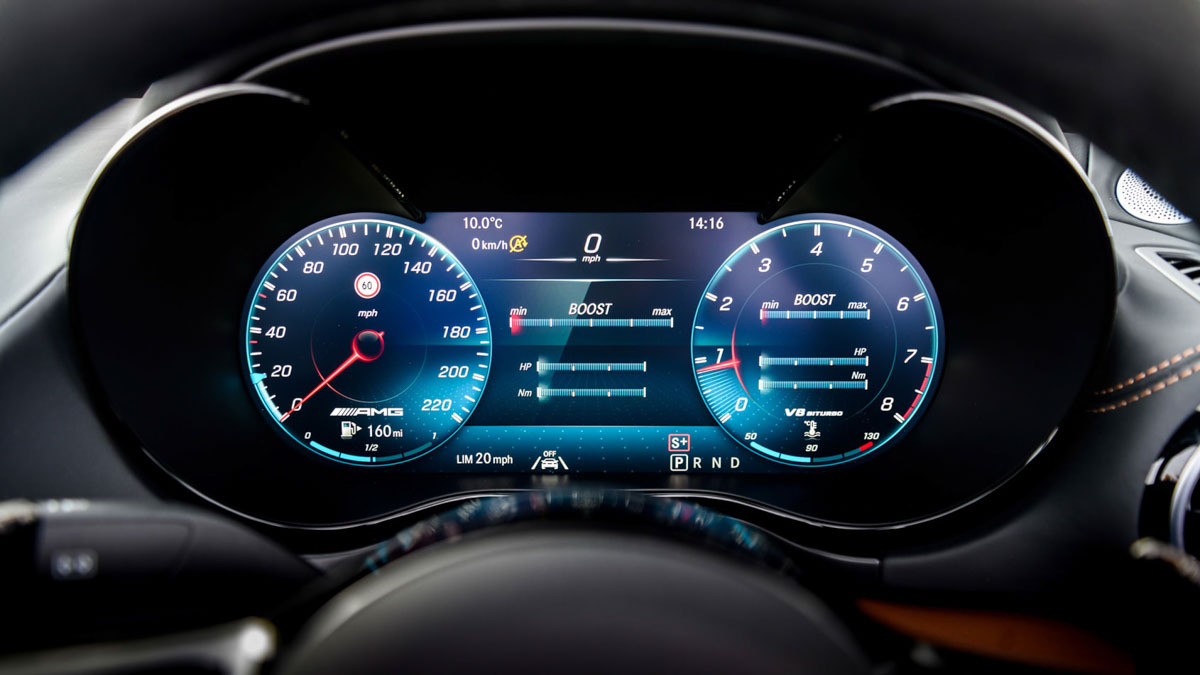 The further up the AMG GT food chain you go, the better things get. The GT R isn’t quite as compelling an object or a driver’s car as the GT R Pro, but its combination of hyper-agility and thunderous engine is still hugely appealing. The question, though, is whether that appeal would remain were you to take a pair of tin snips to the roof and turn the GT R into a soft-top.

That’s just what Mercedes-AMG has done, albeit with a little more finesse and probably something more accurate than tin snips, to create the AMG GT R Roadster.

With identical firepower and the same chassis and bodywork changes, but greater access to the elements, is it the AMG GT R we’ve been waiting for, or a variant too far for AMG’s front-engined supercar?

The car lifts its mechanical specification from the coupe, which means a 577bhp variant of AMG’s 4-litre twin-turbocharged V8, peak power being developed at 6250rpm. Torque of 516lb ft is spread across the 2100-5500rpm range, and power is transferred to the rear wheels through a seven-speed, dual-clutch transaxle.

Despite a set of Cup 2s you could use to steamroller fresh tarmac, traction is more a limiting factor than anything else for the GT R Roadster’s 0-100kph time; at 3.6 seconds it’s still supercar-quick, but with low-threes increasingly the norm, 3.6 no longer seems as mind-bending as it once did. 317kph flat out is still pretty brisk though, certainly for something with a retractable roof.

In addition to the coupe’s mechanical layout, the Roadster also replicates other facets of the coupe’s specification, from the four-wheel steering and adjustable suspension, to the active aerodynamics and the wider body that comes with AMGs from the GT C upward. It also retains the coupe’s rear wing, or a variant of it, which looks incongruous perched upon the Roadster’s rear deck, and ten-spoke forged wheels and chunky-sidewalled Michelin Cup 2s.

The key difference, clearly, is that the roof folds back. The little fabric tent looks nearly as strange as the wing when in place, but retracted the Roadster’s hot-rod proportions are almost cartoonish. If you’ve ever doubted a front-engined car’s credentials as a true supercar, then this could be the model to change your mind; it’s every bit as striking as anything with its engine in the middle. Weight, meanwhile, comes in at 1635kg.

The R feels tense at low speeds. Tyres scud across the road surface on tight steering inputs, wheels crash over potholes, and as you pull to a halt there’s an audible thunk as the dual-clutch ’box discovers first gear. The four-wheel steering does make navigating tight streets remarkably easy (top down in central London, one assumes) but it’s a car infinitely happier at speed.

Preferably quite large speeds. On damp middle-England roads you sometimes feel like you’re at ground zero in a battle between biturbo V8, cold rubber and crumbling bitumen, and were it not for the electronic cavalry of traction and stability controls, the V8 would almost always emerge the victor.

Feeling the rear wheels breaking traction in the mid-range gears is certainly exciting though, and electronic limitations or not the GT R accelerates like mortar fire. You’ll probably want to direct the battle by switching the gearshift to manual mode (one of the steering wheel switches can be handily configured to enable this) which gives the most predictable throttle control.

It’s also a chance to experience the spectacular speed at which the dual-clutch transaxle can swap cogs. I’m not sure AMG gets enough credit for this gearbox; the speed between clicking a metal paddle and getting a new gear, whether up or down the ’box, is immeasurably quick.

The chassis is more than up to the task of containing it all, too. You’d probably never get to explore the car’s abilities to the same degree in the dry, but on these damp roads the GT has wonderful balance. The moment you get on the throttle after turning in, it becomes another way of adjusting the car’s attitude. Given a track, with more space and fewer objects to collect if you get it wrong, it feels like you could skate it around like a big GT86.

There is a downside, and it’s one typical of open-topped cars: The GT R Roadster lacks the rigidity of the coupe, which results in scuttle shake on rougher roads. It doesn’t detract from the hyper-precision of the steering, nor the car’s composure in quick corners, but does seem like quite a compromise for the roofless version to bear.

Mercedes-AMG will make 750 examples of the GT R Roadster, perhaps an indication of its slightly curious blend of hardcore attributes and less focused roadster body. It’ll also require those buyers to spend $28,316 more than they would on the coupe, the Roadster coming in at $233,155.

With a suitable leeway given to encompass some of the other choices at this price point, the GT R Roadster does have several competitors, from the $262,935 McLaren 600LT Spider to the $276,115 Porsche 911 Speedster. The beauty of this sector of the market is that each car has something very different to offer, and there are no real wrong answers. Given the choice, though, we’d probably have the fixed-roof versions of all three..