Take a 360-degree tour behind the scenes of Gymkhana 9 with Ken Block, The Hoonigans and Ford Performance

“The scariest thing about this is the timing. Half a second makes a difference of ten feet for the train, given the speed it was moving.”

If you were one of almost two million people who watched Gymkhana 9 within 24 hours of its being uploaded, this shouldn’t come as a surprise, the train crossing just one of several stunt arenas Ken Block, The Hoonigans, and Ford Performance walk their fans through in this behind the scenes Virtual Reality footage. Yes, it’s another 360-degree video, but this really does offer you an alternative insight into Block’s last Gymkhana run before Climbkhana next year.

Interestingly though, the train sequence is not what inspired Block and his crew on Gymkhana 9. During one particularly hair-raising moment, Block’s 600bhp Ford Focus RX dipped its rear wheels over the edge of a dock in their Raw Industrial Playground in New York. As well as requiring ten different attempts to nail using just ‘an educated guess’ (as well as divers underwater and an oxygen tank in the cabin), the whole sequence was actually a giant middle finger to THIS BMW M4 aircraft carrier drift video:

“I was really annoyed with a BMW commercial” Ken Block recently told Top Gear. “It bugged me because lots of people thought it was real. That’s unfortunate for someone like me, because I work so hard to do all my driving for real and in a cool, authentic and original way. So to see someone drifting right at the edge of an aircraft carrier – which, admittedly is extremely cool – but was all fake, and then for people to believe it, hurt. So I wanted to better it and do it for real.” 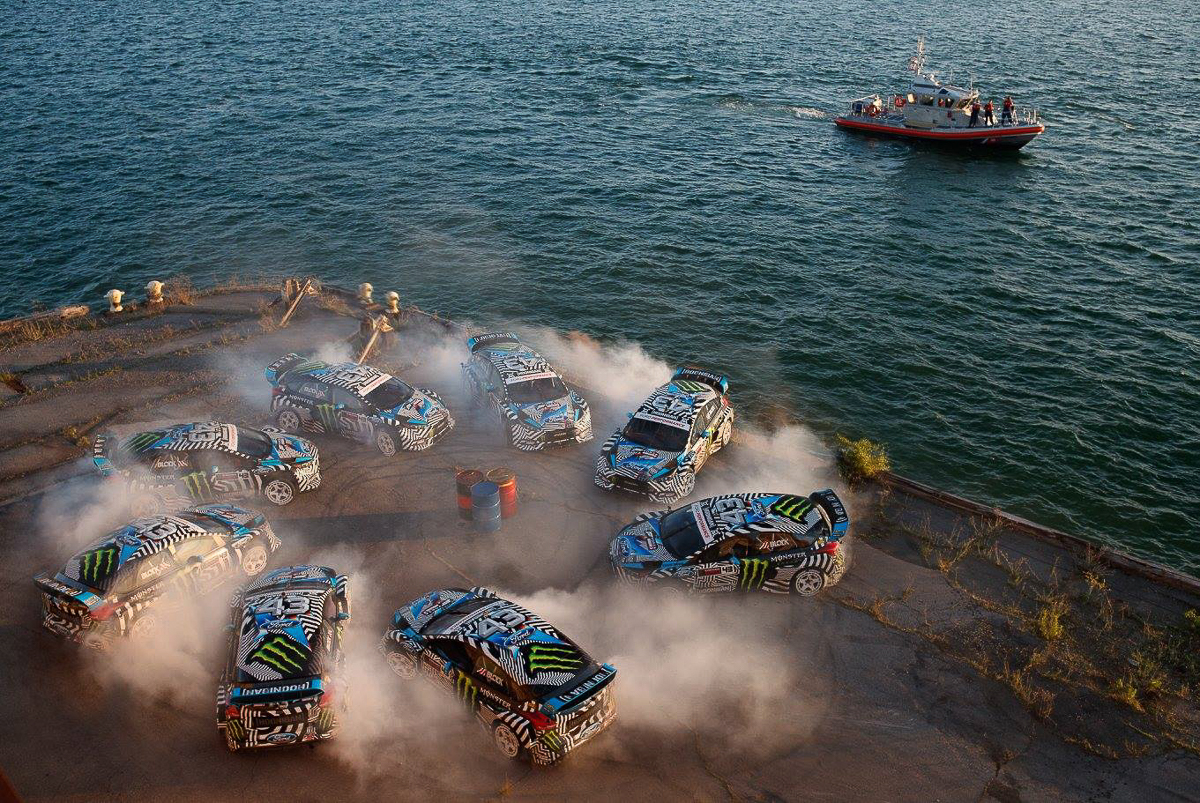 In an effort to one-up the Dubai-set Gymkhana 8 (in which he lamented the lack of tyre smoke erupting from the Hoonicorn), Block received a bespoke compound – and 50 sets thereof – from Toyo Tires for the RX he would be using. It would not be the only modification either: having been set up specifically for his World RallyCross season, tuning was required for the suspension, engine and turbochargers.

“First time I came in, I pulled the handbrake and got on the throttle, and the car just had so much grip, it just hunkered right in. It wasn’t until the second time that I really got a good rotation. Adapting to new cars and new situations was really fun though.”

Enjoy this Gymkhana 9 behind the scenes video?