The time attack Toyota TRD Griffon Concept finally cracks a sub-minute lap of Tsukuba Circuit. What time can you do it in?

The TRD Griffon Concept – a research and development vehicle from Toyota’s in-house tuning boffins – has succeeded in the challenge of lapping Tsukuba Circuit in under a minute. We’ve been following the Griffon’s progress since the concept was unveiled at the 2013 Tokyo Auto Salon and watched as it got closer with every outing. The best lap time was achieved on the 31st of January with an incredible 00:58.407.

Lapping Tsukuba in under a minute driving any car is an amazing achievement and normally associated with massive horsepower Time Attack cars run by the likes of Under Suzuki in his 800hp S15 Silvia. The TRD Griffon is one very fast neo Hachi-Roku.

Watching the TRD Griffon achieve its goal immediately got me in the mood for some Tsukuba action. The crankandpiston Playstation was fired-up, Gran Turismo 6 was hooked-up and, initially, a stock Toyota 86 was chosen for a few hot laps while everyone else in the office threw stuff at me. And, the result was surprising.

After just four or five laps (barely enough time to warm up) and under the extreme conditions of the crankandpiston office (people swearing, spitting and throwing stuff at me) the best lap time I achieved in the stocker 86 was a 1:09.146. It was a far from clean lap and there’s at least another second to be had (insert various excuses here) but, that can’t be right? That means the TRD Griffon is over 10 seconds faster than a stock 86.

Fearing that Gran Turismo was making a fool out of me (again) I set aside childish things and did some proper journalistic research. A quick scan of the Japanese interwebasphere produced an official timing for an unmodified Toyota 86 around Tsukuba by Car Top magazine (Japanese publication) who recorded a 1:09.776. So the Griffon really is over ten seconds faster per lap. How in Mount Fuji’s name did they do that?

A quick rummage through the TRD archives – and with help from my assistant Mr. G. Translate – uncovered the obvious element in the equation. The Griffon has undergone a serious weight reducing program and lost a few hundred kilograms on the slimfast diet. Power output is also up by a few ponies but, if you are considering building your very own 86 Griffon, get out the credit card. 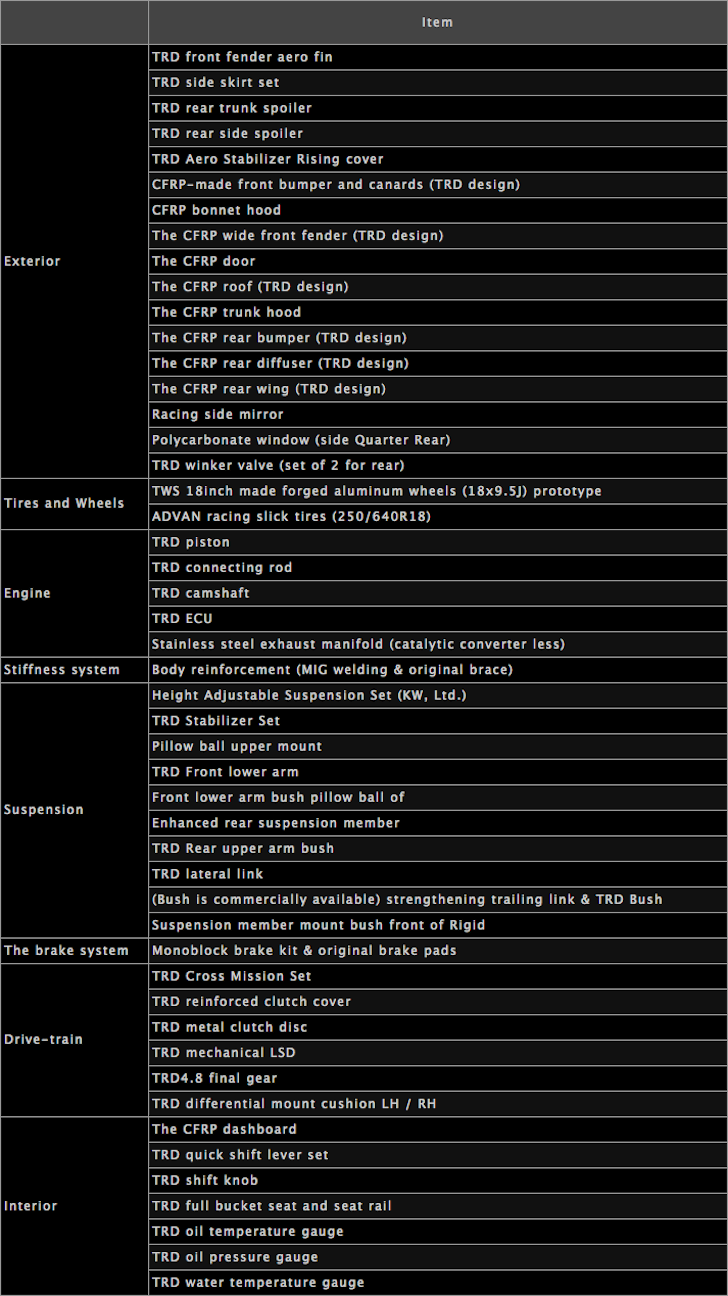 That is one mighty big TRD shopping list for your inner Toyotaku to chew over. However, I am sensing a challenge coming on. Over the next couple of evenings I shall mainly be busy modifying a Toyota 86 and tackling Tsukuba in an attempt to smash the TRD Griffon’s lap time of 00:58.407. Granted, it will be a virtual endeavour on Gran Turismo due to currently not owning a Toyota 86, lack of funding and no access to Tsukuba. But beat that time I will.

Feel free to add your personal best lap times around Tsukuba in a modified Toyota 86 in the comments section below. And no cheating!