Nissan announced earlier this year its desire to reinvigorate its place in the sports car arena with a new two-seater Z-car, and we now have a date for when the company will reveal what it is calling the Z Proto: September 15.

Nissan has not officially confirmed any technical details about the next Z, but the ‘Proto’ signature in this teaser suggests this could be a near-production prototype, similar to how BMW and Honda reveal some of their new models in ‘concept’ form.

We do know the new Z will carry plenty of design elements drawn from the original 240Z. The nose will be clean and simple, with a large grille opening and curved daytime running lights drawing up to a relatively upright windscreen. The blacked-out A-pillars create a quasi-wraparound look for the glasshouse, a nod to the contemporary R35 GT-R, and the overall silhouette is that of compact front-engined rear-wheel-drive coupe.

The flat sloping roofline is more angular and rigidly surfaced than on the outgoing 370Z and preceding 350Z, and accentuated by a clear line of brightwork along the window line. The rear quarters are less curvaceous than those of its immediate Z-car predecessors too, once again mimicking earlier Z models from the ‘70s and ‘80s with a flat, Kamm-tail rear end.

What exactly will power this new Z coupe is as yet unknown, but Nissan’s VR30DDTT twin-turbocharged 3-litre V6 petrol engine (as found in the Japanese-market Skyline saloon and Infiniti Q50/Q60 twins) is one candidate, with plenty of scope for a suitably high power output. In that engine’s current application, power is rated at up to 394bhp, a figure that would place the new Z right in the crosshairs of sports coupe rivals such as the Toyota Supra, Porsche Cayman GTS 4.0 and Audi TT RS.

Alternatively, the 1.8-litre turbocharged four-cylinder from the Alpine A110 and Renault Megane RS could also be utilised, with more like 250-300bhp, making for a less costly car to rival smaller sports models such as the incoming Toyota GR86.

Whatever form the new Nissan Z sports car takes, it’ll be a welcome distraction from what has been a controversial 12 months for the company, and the welcome continuation of a legendary Japanese nameplate. 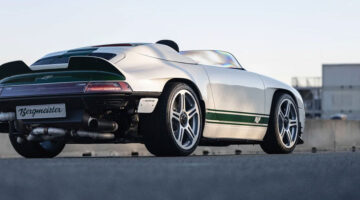