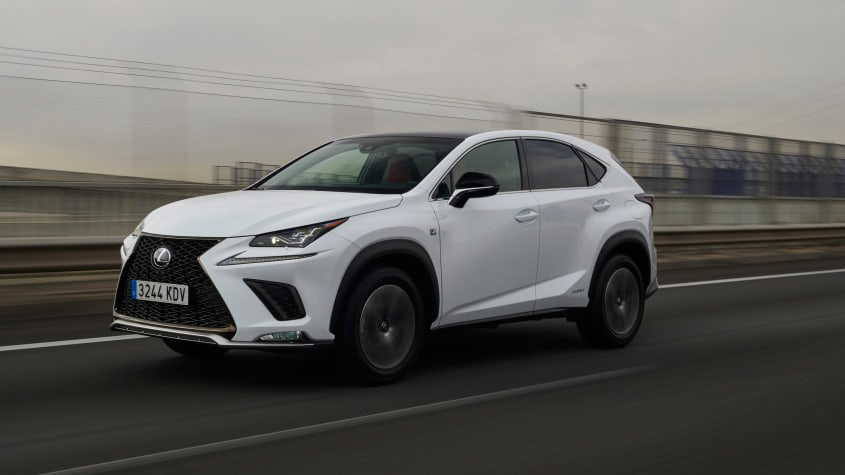 It’s not unusual to see performance versions of SUVs these days. The Lexus NX F Sport isn’t quite a performance model, using the same drivetrain as every other NX, but with uprated suspension and concessions to sportier styling it’s the closest we’re likely to get.

The NX nevertheless slots into the same class as cars like the Alfa Romeo Stelvio and Porsche Macan. We know cars like this can appeal to keen drivers, in other words – so where does the NX fit into that spectrum?

There’s just one engine available in the NX these days, a 2.5-litre Atkinson-cycle four-cylinder petrol attached via a clever power-splitting transmission to an electric motor. The transmission can then either blend petrol and electric power, or send one or the other to the wheels via a differential. In turn, deceleration can feed energy back into the battery pack, as you’d expect from a typical electric vehicle.

Lexus quotes a 195bhp combined output, with no torque figure and no peak engine speed. Fighting against a minimum 1785kg kerb weight the result is a so-so 9.2-second 0-100kph run and a top speed of 180kph. Economy looks relatively unimpressive too, with a maximum WLTP combined figure of 7.5L/100km.

Entry-level NXs are front-wheel drive, but all others use an additional electric motor at the rear axle for part-time “E-Four” all-wheel drive.

First seen in 2014, the NX is among the older models in the Lexus range, of similar vintage to the RC coupe and beaten only for age by the IS and the now nine-year-old CT. The subtext to this is that it rides on an older platform than more recent Toyota products, missing out on some of the newer powertrains and lightweight gains and sharing its DNA with the outgoing Toyota RAV4.

F Sport models feature uprated suspension along with a technology Lexus calls Lateral Performance Dampers, originally a Yamaha innovation. Connecting different hard points under the car they’re effectively designed to absorb vibrations from the chassis – a neat way of mechanically tuning out noise so more traditional sound-absorbing measures can better do their job.

It was an interesting experience driving the NX F Sport back-to-back with the smaller UX F Sport. The smaller car was both an illustration that a lower vehicle will always be less compromised as a driving machine than a taller one, but also highlighted the benefits of its lower weight and a more sophisticated platform than the older NX.

From the feel and layout of the interior to the suspension behaviour and the performance, the NX isn’t quite as adept as its smaller sibling. The upright and strangely protruding dashboard face isn’t as attractive as that of the UX, while the instrument cluster is an old-school twin-dial setup and the infotainment display sits awkwardly on top of the dash rather than being more neatly integrated. The seats are firmer and less cosseting too, though the driving position is more like that of a traditional SUV than the car-like UX.

It’s not the sportiest of vantage points as a result, and that feeling carries over to the driving experience. F Sport trim might project a dynamic image, but the NX lacks the precision and agility present in both its rivals and the smaller UX. A surprisingly firm ride marrs otherwise excellent refinement (it settles down on faster A-roads, but it’s less happy in the countryside) and while body control is good and grip more than adequate for a car in this class, its responses are a little too ponderous to really entertain.

The weighting and feedback of the steering are actually better than the disappointingly muted UX rack, but each movement of the wheel takes more time to register at the front end. The same could be said of the hybrid powertrain, whose slightly older design has more of the disconnected feeling of older CVTs than Toyota’s latest efforts. The NX’s weight hinders it too – there’s more noise than action at full throttle.

Cast aside any sporting aspirations and the NX starts to come back into its own; driven in a more relaxed fashion it’s quiet, comfortable, and being a Lexus will doubtless be a pleasure to own. Those wishing for some dynamism from their family wagons would be better served by newer and more talented rivals.

It’s a competitive class though, and equipment is only part of the story. The Audi Q5, BMW X3 and Mercedes-Benz GLC are all key competitors, but from a driving enjoyment perspective there are two cars that stand out: the Alfa Romeo Stelvio, and the Porsche Macan. The Macan is expensive, with basic 2-litre models starting at $62,688, but it has great road manners and a badge that’s perhaps second to none in this class. The Stelvio meanwhile (from $52,350) doesn’t have the levels of quality of the others, but counters with an agile chassis, quick steering and responsive powertrains that make it genuinely fun to drive.

Worth mentioning too that if you don’t need every inch of the NX’s extra size, the UX that sits below it is a strong proposition in its own right. Starting at under $40k it’s more affordable, it rides and handles better, offers more performance and economy, and has a neater interior design.