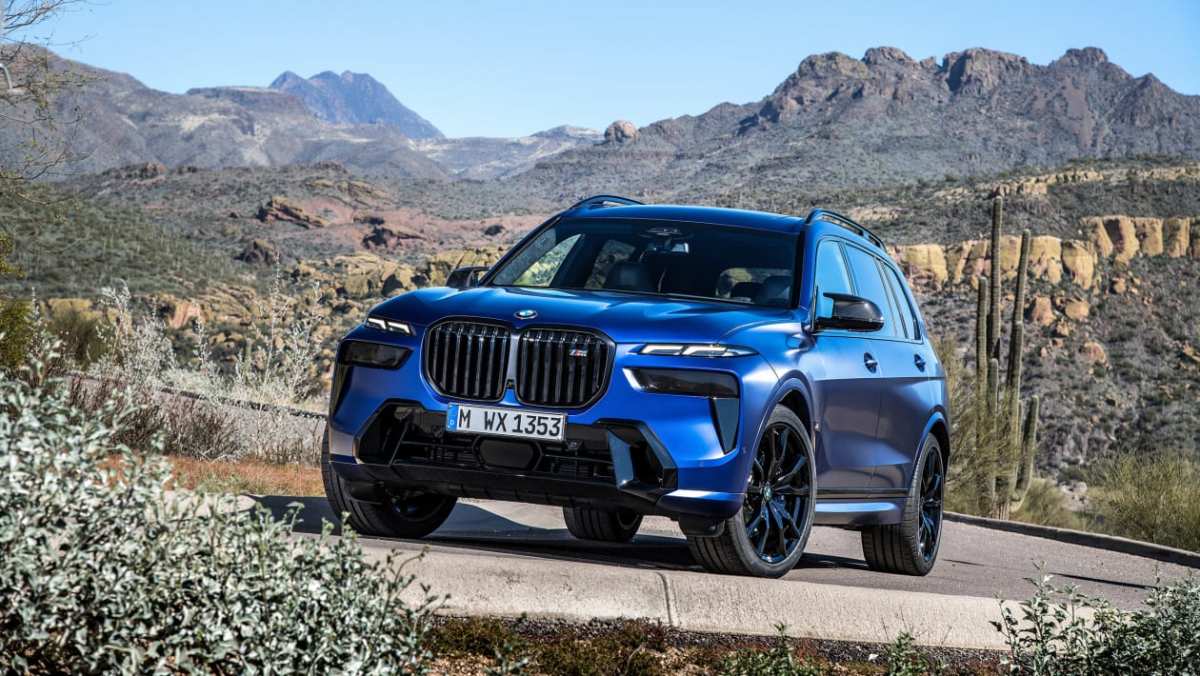 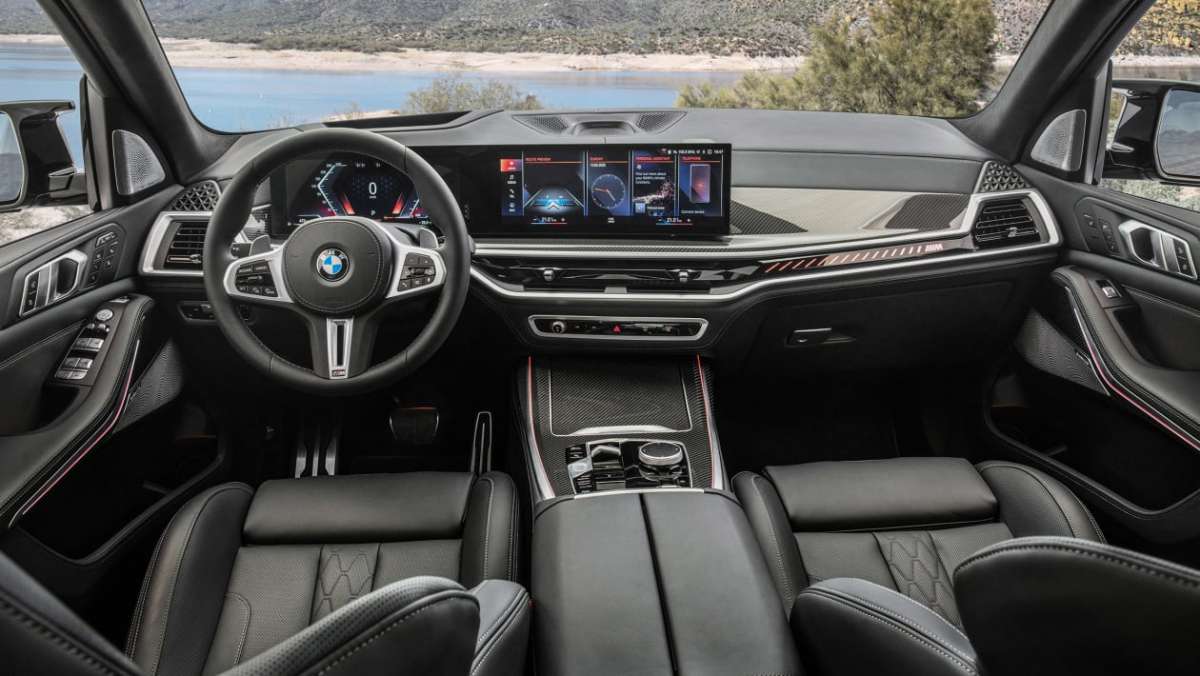 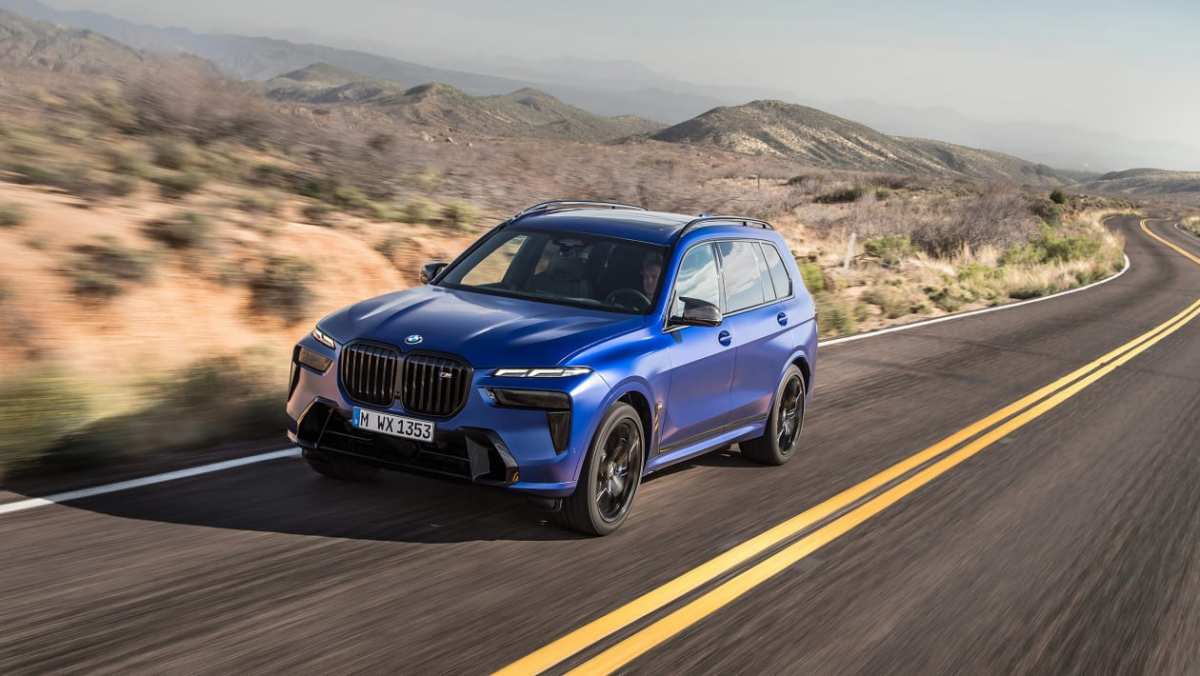 The BMW X7 caused quite a stir when it and its enormous grille debuted in 2018, not only shattering our preconceived notions of what BMW was capable of building, but also how many customers were willing to buy it. So after four years of higher than anticipated sales (in markets outside of Europe, it must be said), an updated X7 has been revealed ahead of another big step-change for BMW design, once again previewing a look that will soon make its way onto the new 7 series and forthcoming XM SUV.

Fundamentals of the X7s design will remain largely the same, its big seven-seat cabin and upright stance remains, but design detailing around the nose and interior have been given a major update. Outside, this starts with the new X7’s split headlight design – one that we’re told will permeate most of BMW’s premium products including the new 7 series saloon. Here, the X7’s upper lighting feature incorporates the daytime running lights and indicators, with the main lighting elements sat directly below in their own self-contained units.

What has come as a surprise is that these darkened units are not completely hidden from view as we expect they will be in other BMW applications, instead they’re integrated into a design motif in combination with front vents that act as air curtains which smooth turbulence around the front wheel arches. From here, the lower bumper is less fussy than before, with large blocky graphics that counteract the extreme proportions of the grille and headlights. On some models, those front grille vanes are able to be illuminated.

The body shell itself is shared with the previous generation model, so doesn’t adopt some of the new surfacing language as found on the new 2 series Active Tourer and iX SUV, but the existing sills and rear bumper insertions sync with the new front end design well enough. The rear lights are new, with the same exterior shape now infilled with slimmer lighting graphics and a greater emphasis on three-dimensionality within their structures.

The engine range has been reduced to three options, headlined by a new V8-powered M60i M Performance, with two mild-hybrid six-cylinder units making up the lower ranks. The M Performance is the sole high performance option in the region– the quad-turbocharged six-cylinder M50d option now looks to be dead. Despite the bigger number on the tailgate, the M60i produces the same 523bhp from a twin-turbocharged 4.4-litre V8 as before, but the engine itself has been mildly updated internally with a few detail changes around the crankshaft drive, oil pump and turbochargers. It also integrates a new mild-hybrid system that adds a further 12bhp, 147lb ft electric motor to the powertrain in the form of a 48V electrical system and ISG.

As per usual, these figures can’t be simply added to the power tally as their effects are made when the engine’s out of its peak operating window, meaning the X7 M60i’s peak figures are never more than those quoted for the combustion powertrain, but it should deliver at least a little bit of extra momentum under hard acceleration at low rpm and help fill in some of the V8’s (admittedly tiny) torque gap. With all that grunt, this 2565kg SUV will accelerate to 100kph in 4.7sec, which I’m sure you’ll agree is plenty.

BMW’s also been hard at work on its six-cylinder petrol model, introducing a heavily updated version of the B58 that will soon make its way into other BMW models. The engine’s fundamentals are shared, including its closed-deck construction and basic Double Vanos and Valvetronic systems, but BMW has focused on variability of the fuel burn, with the switch over to a more efficient Miller combustion cycle improving the efficacy of the turbochargers and reducing both fuel consumption and gas emissions over a wider portion of the rev-range.

The updated valvetrain doesn’t just focus on providing the cleanest burn, but also maximises the amount of energy that’s able to be fed into the mild hybrid system, while Double Vanos has been given a contemporary update, as the valves are now controlled electronically, widening the variability of the timing, increasing performance when required while maximising efficiency when it’s not. The result is a pretty hefty increase in output, with peak power now rated at 376bhp, a rise of 45bhp compared to the previous 30i, while torque is now rated at 380lb ft (+53lb ft), and can rise as high as 398lb ft with some help from the mild-hybrid system. Of more relevance to Europe will be the 40d model, which features a mild update on the existing 40d powertrain option producing 348bhp, supplemented with a stout 516lb ft of torque.  All engines are connected to an xDrive all-wheel drive system and the familiar eight-speed ZF transmission. Chassis technology such as BMW’s active anti-roll system and air suspension are also fitted as before, while rear-wheel steering is an option on most base models, and standard on the M60i.

BMW has also given the interior a wholesale makeover, with a brand new dashboard and centre console that now integrates the iX’s dramatic curved screen interface. To suit, the upper dashboard has been completely redesigned, with slimmer graphics and the removal of BMW’s air conditioning controls. Instead, they – like a vast majority of the car’s functions – are now accessible through the main 14.9-inch touchscreen, which is also able to be controlled via the typical controller mounted between the seats. BMW’s joystick gear selector also looks to be making its way out in this generation, replaced by an iX-like toggle now integrated into the main control interface on the centre console.

So lots has changed, and while their application on a seven-seater family SUV might render much of this information useless to most readers, these are elements that will soon start making their way onto all BMW models, with both good and bad ramifications. Next up for BMW is a real vision of the future, though, with the dramatic new 7 series just about ready to make its debut in petrol and all-electric forms.