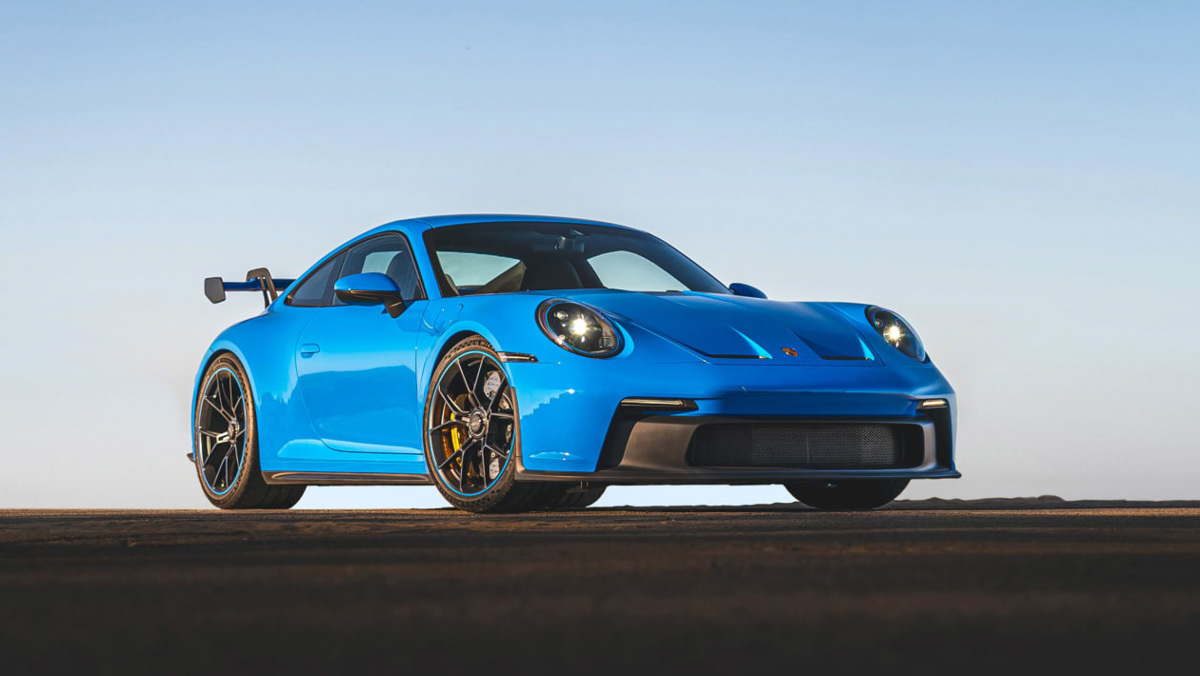 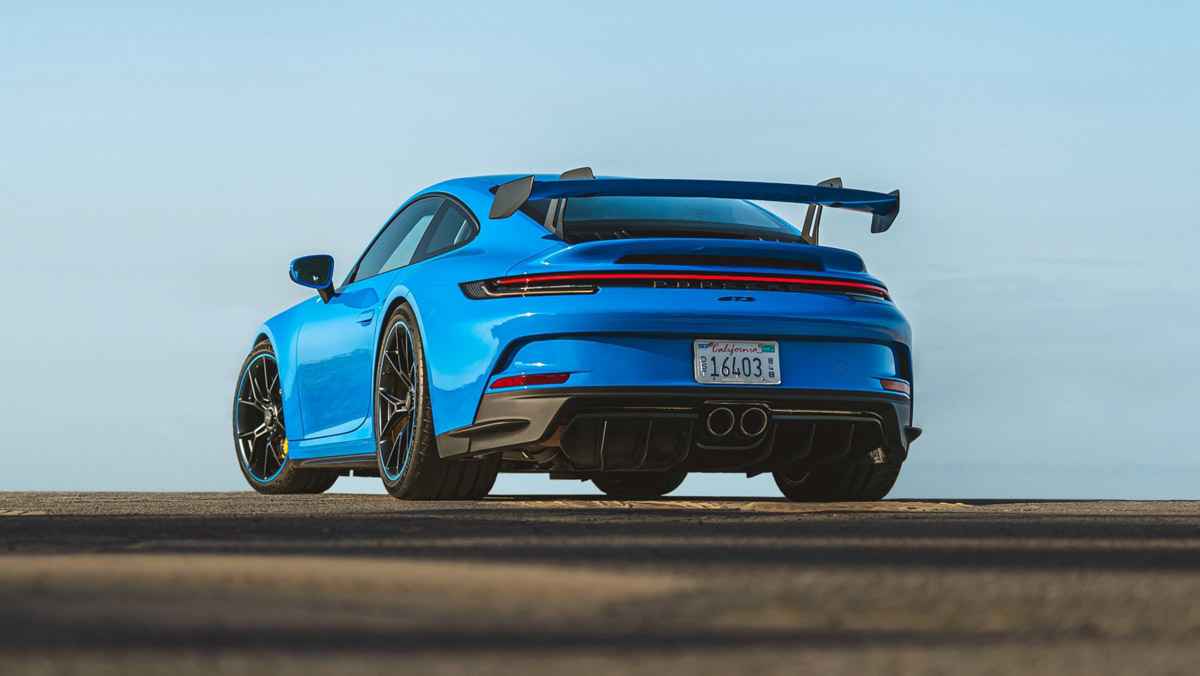 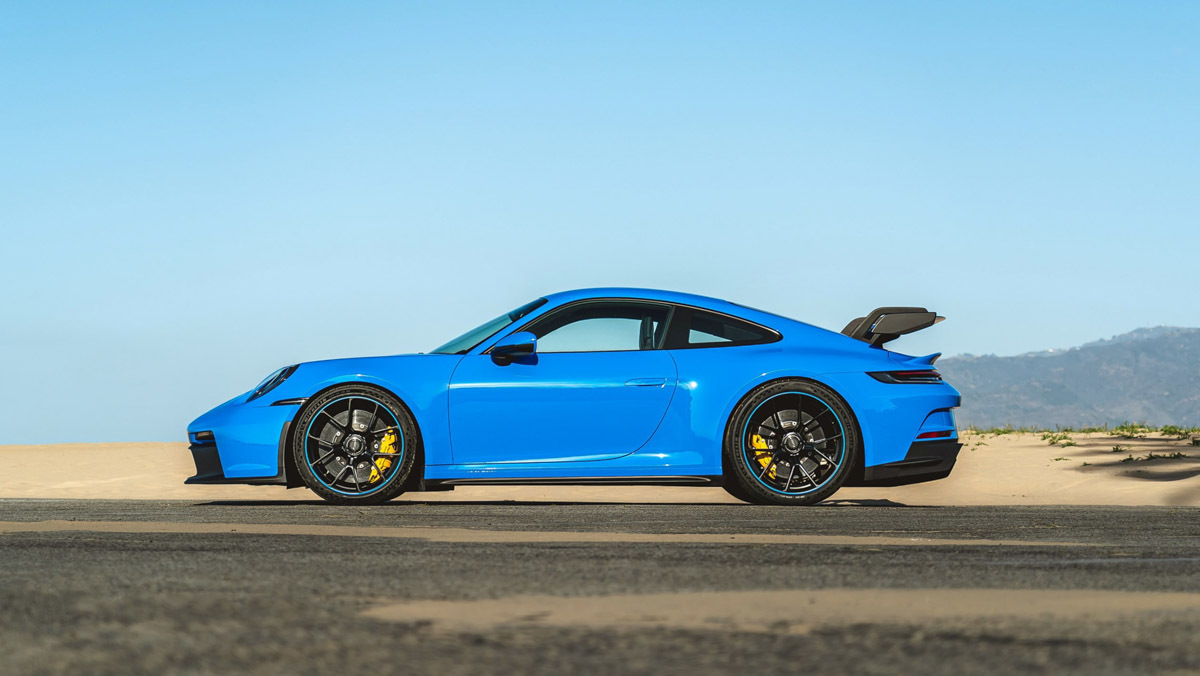 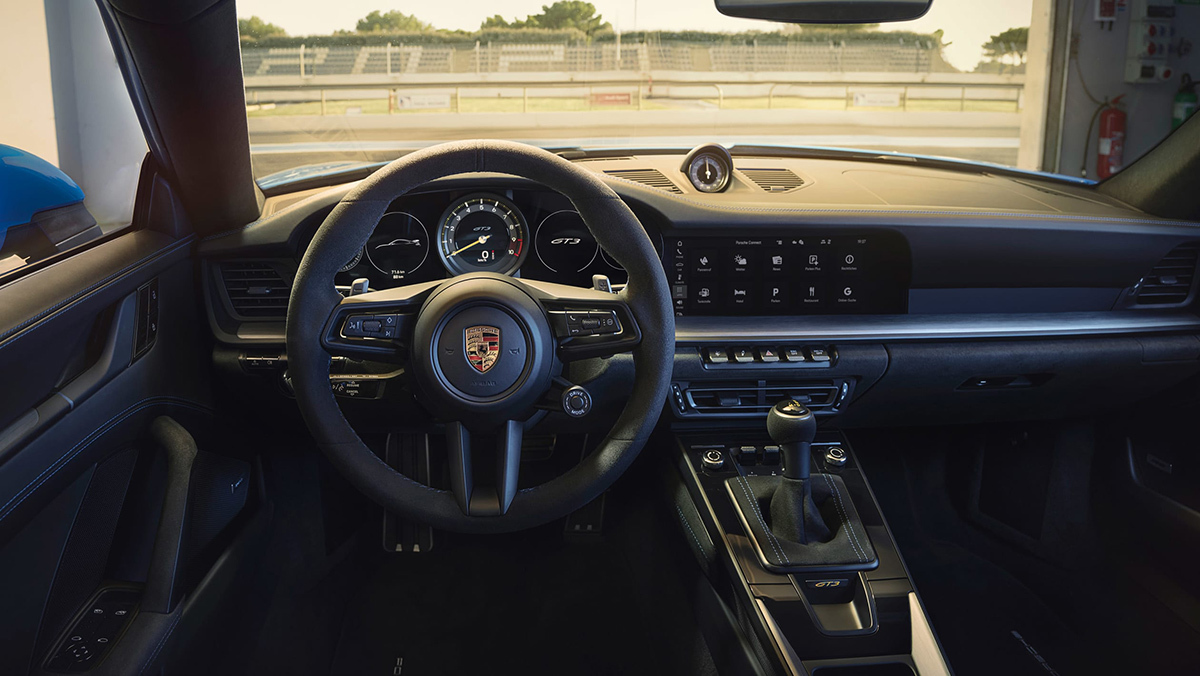 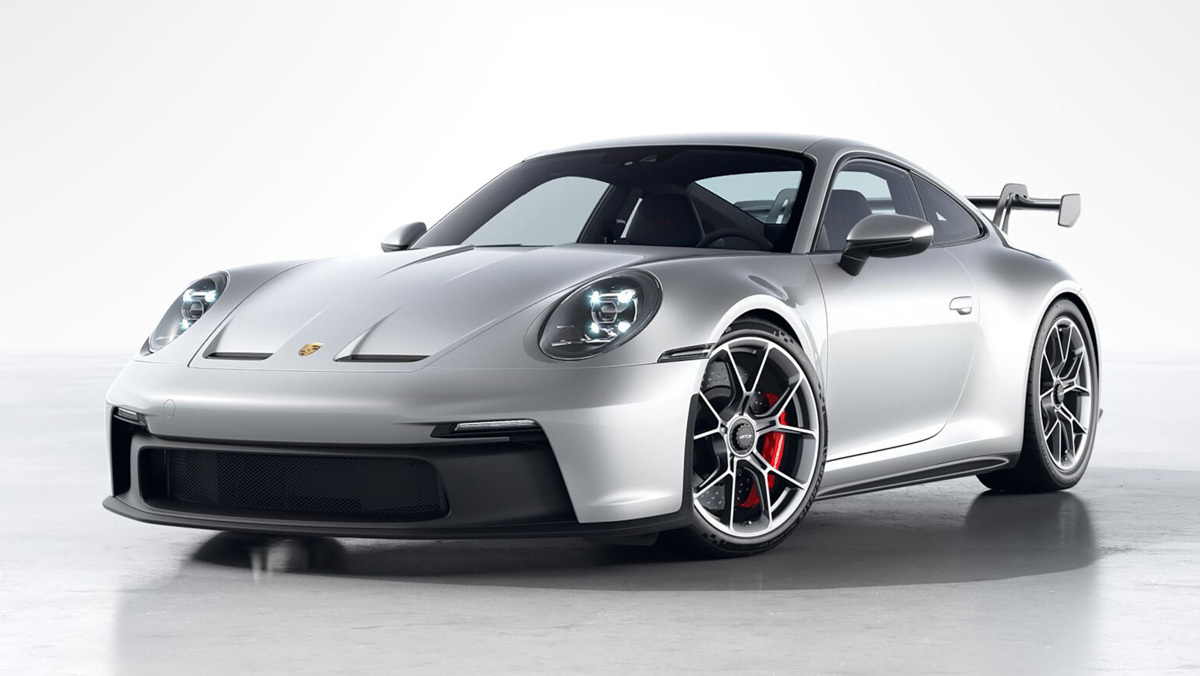 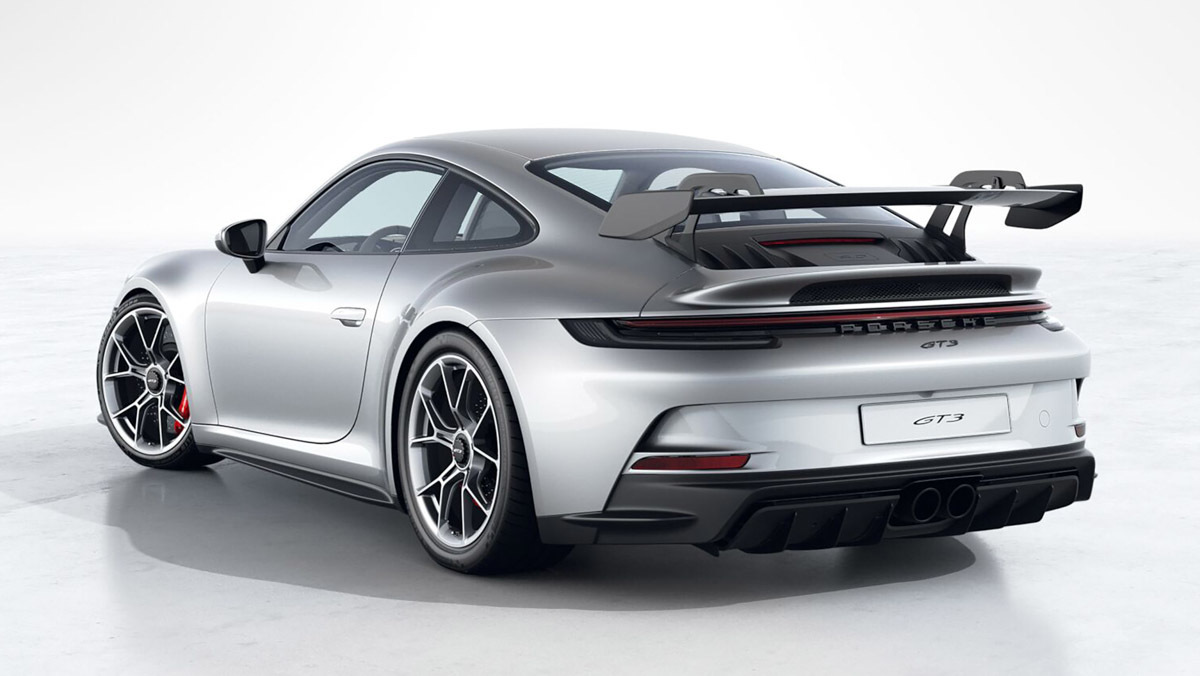 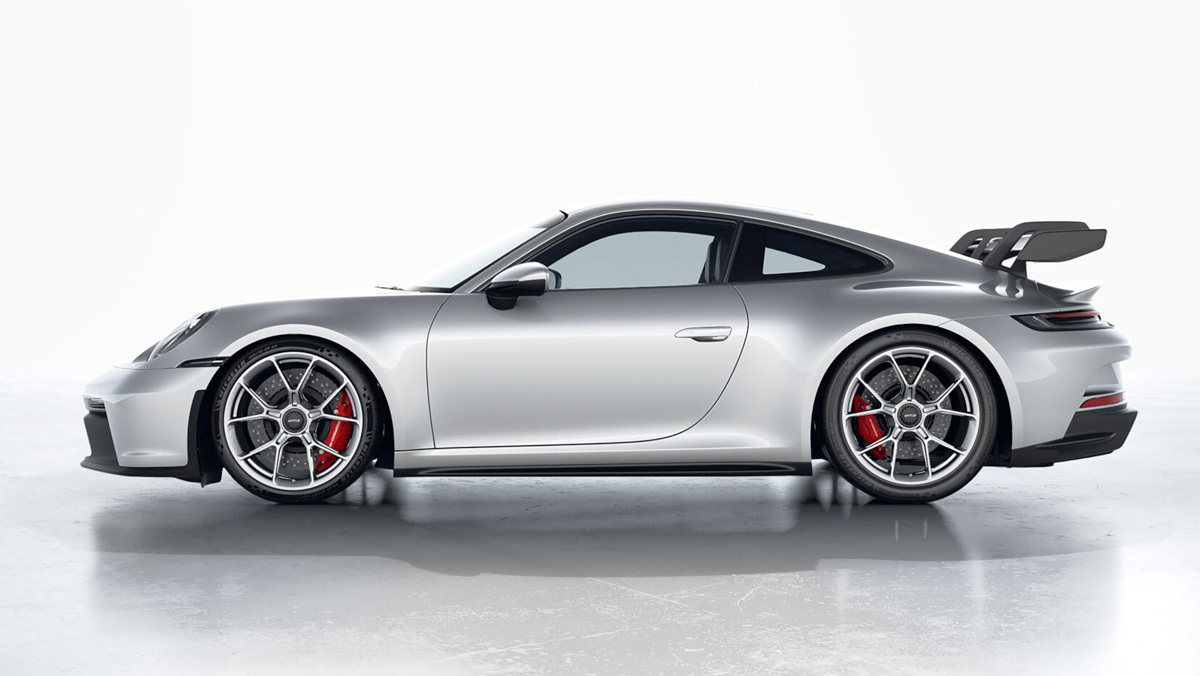 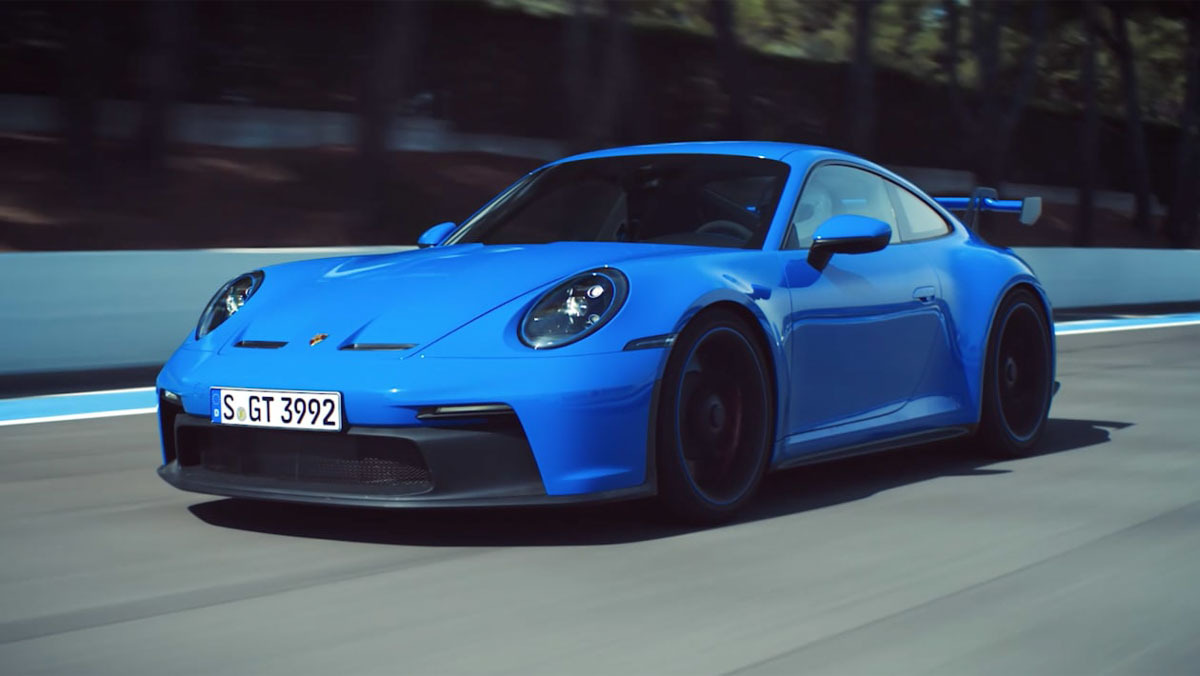 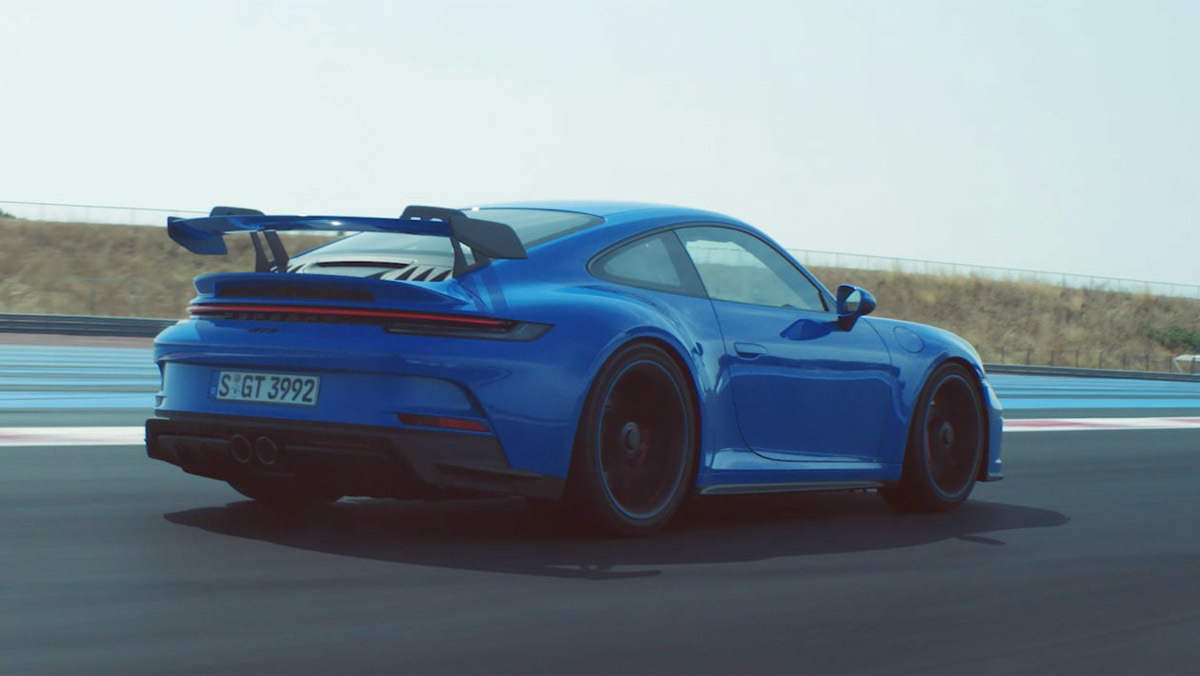 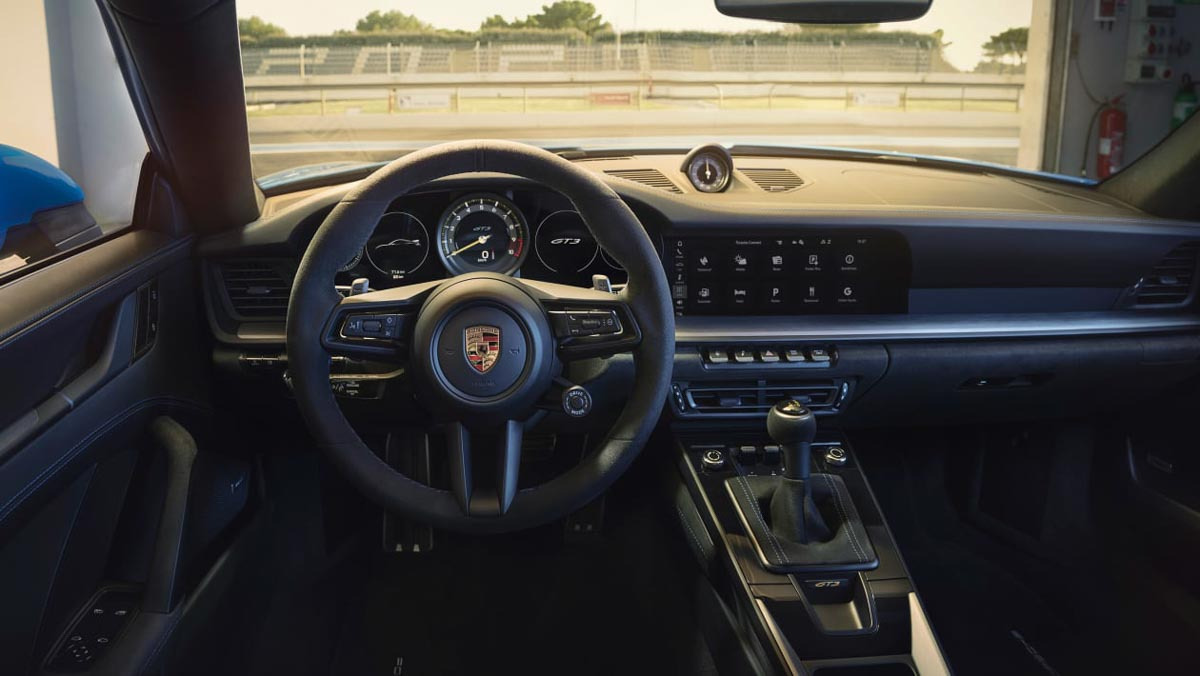 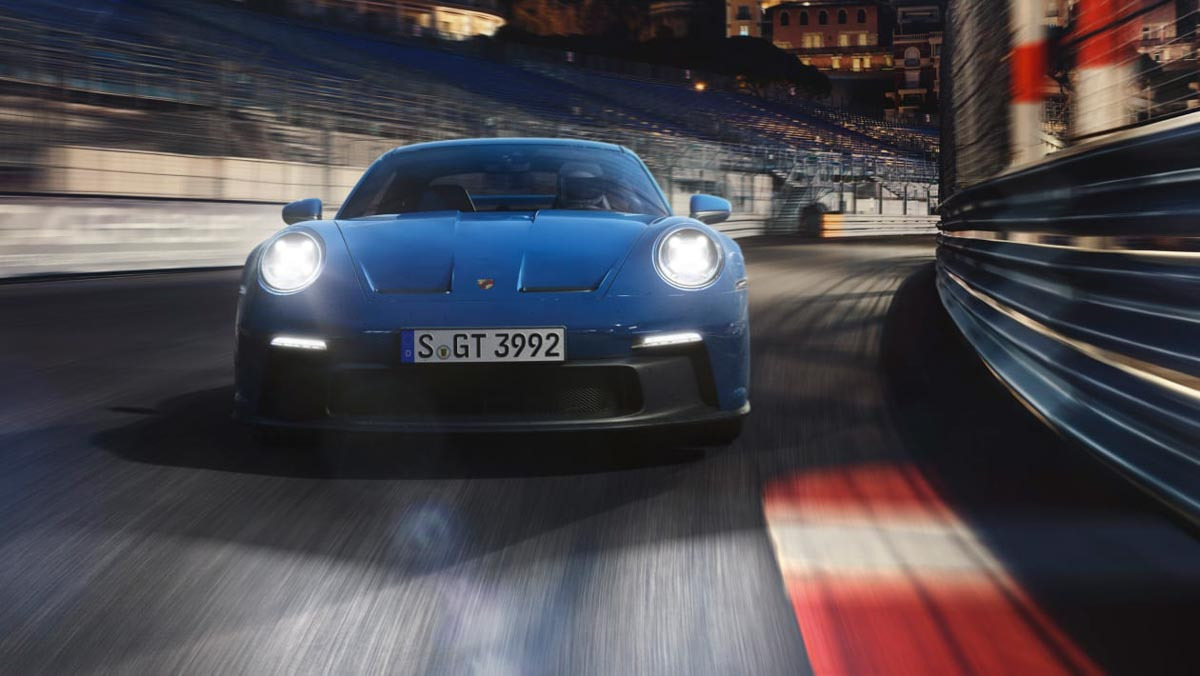 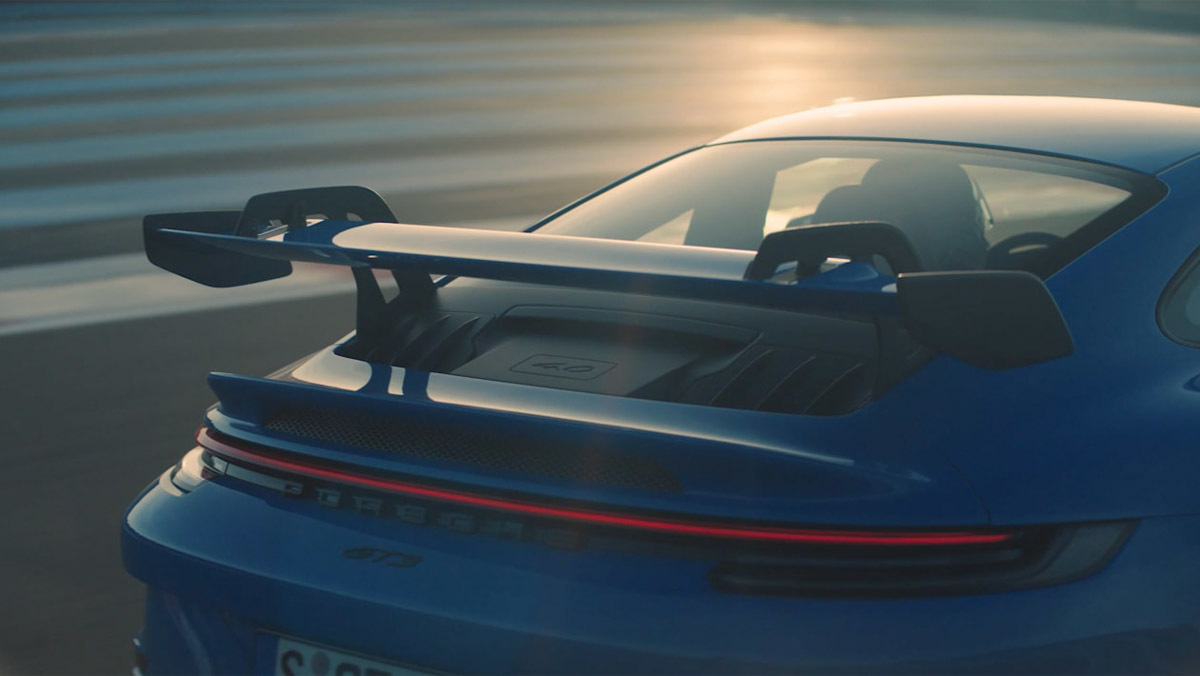 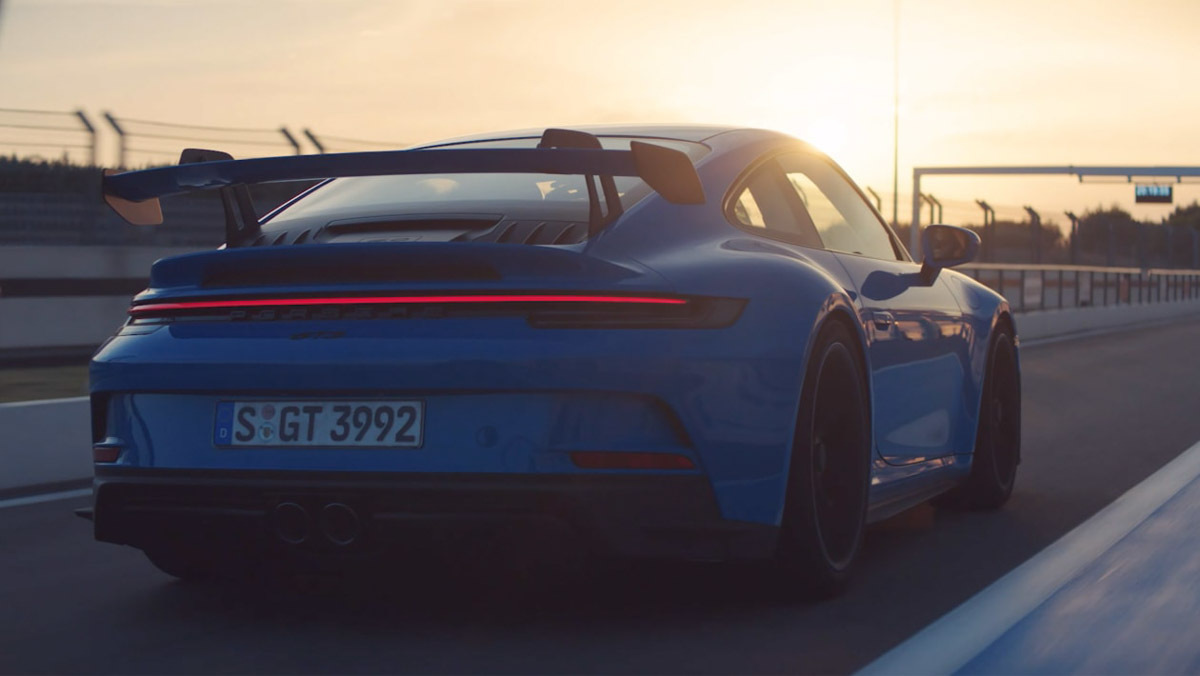 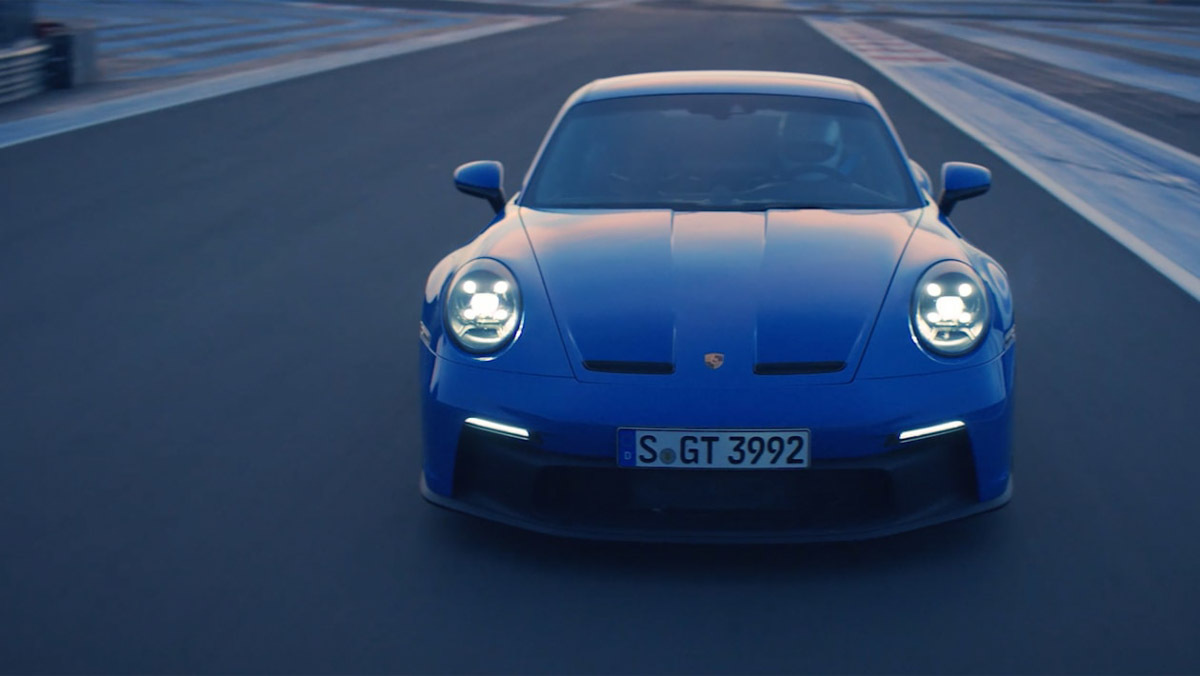 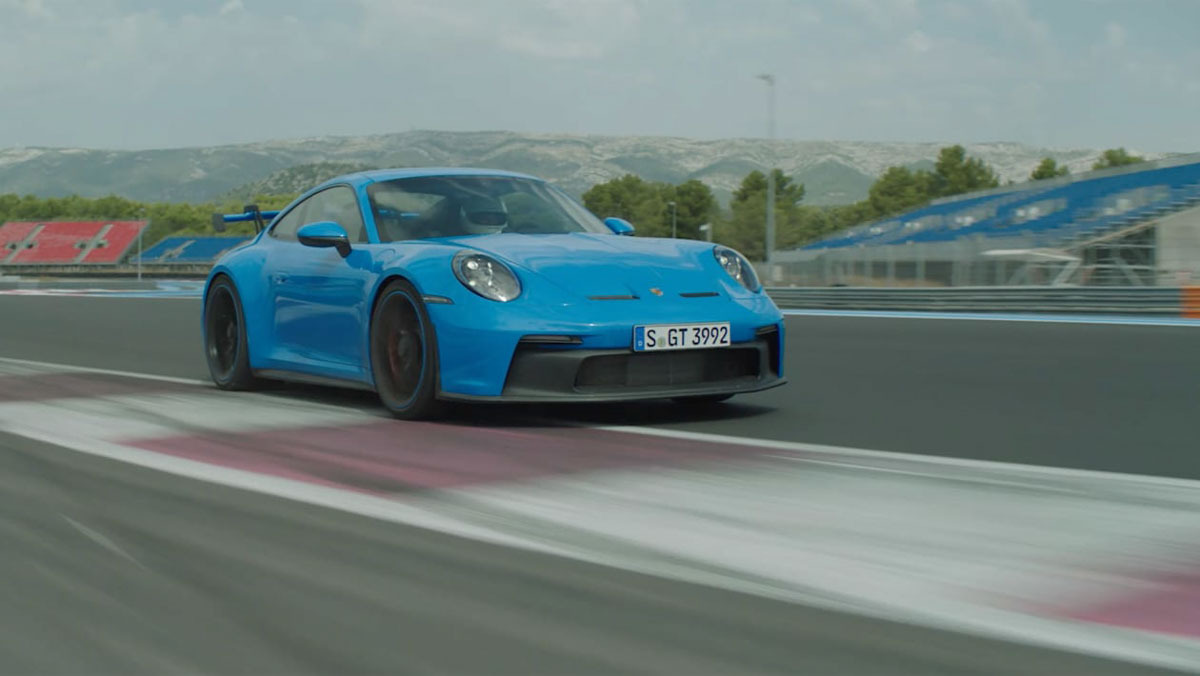 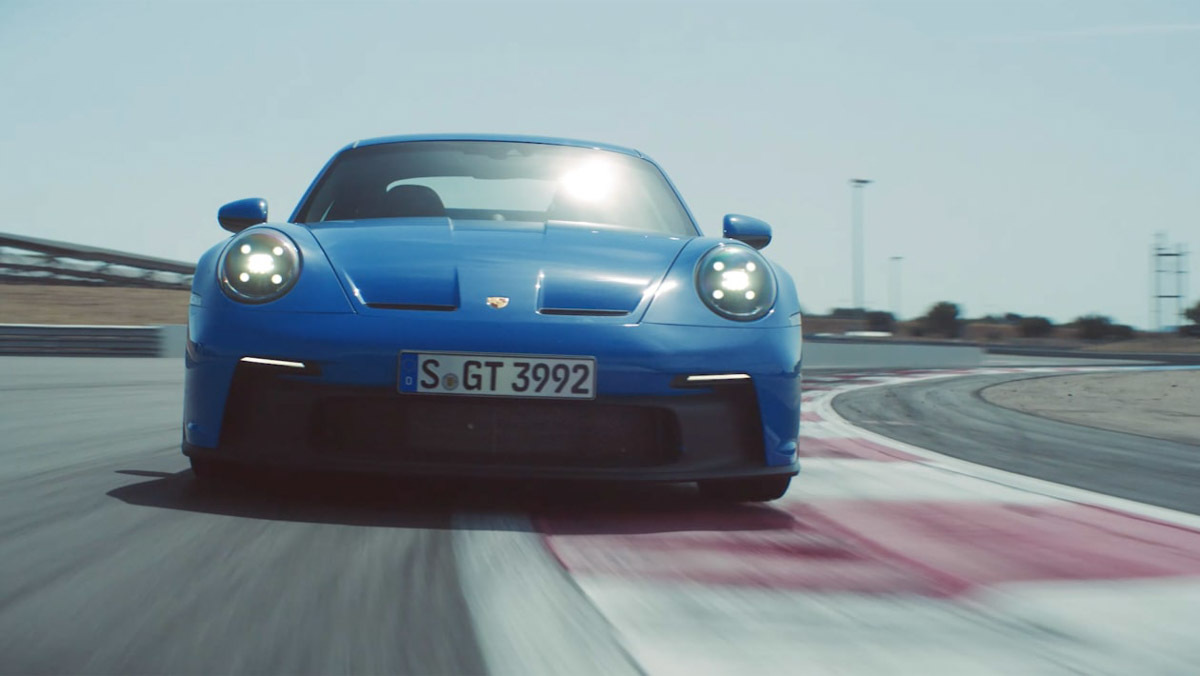 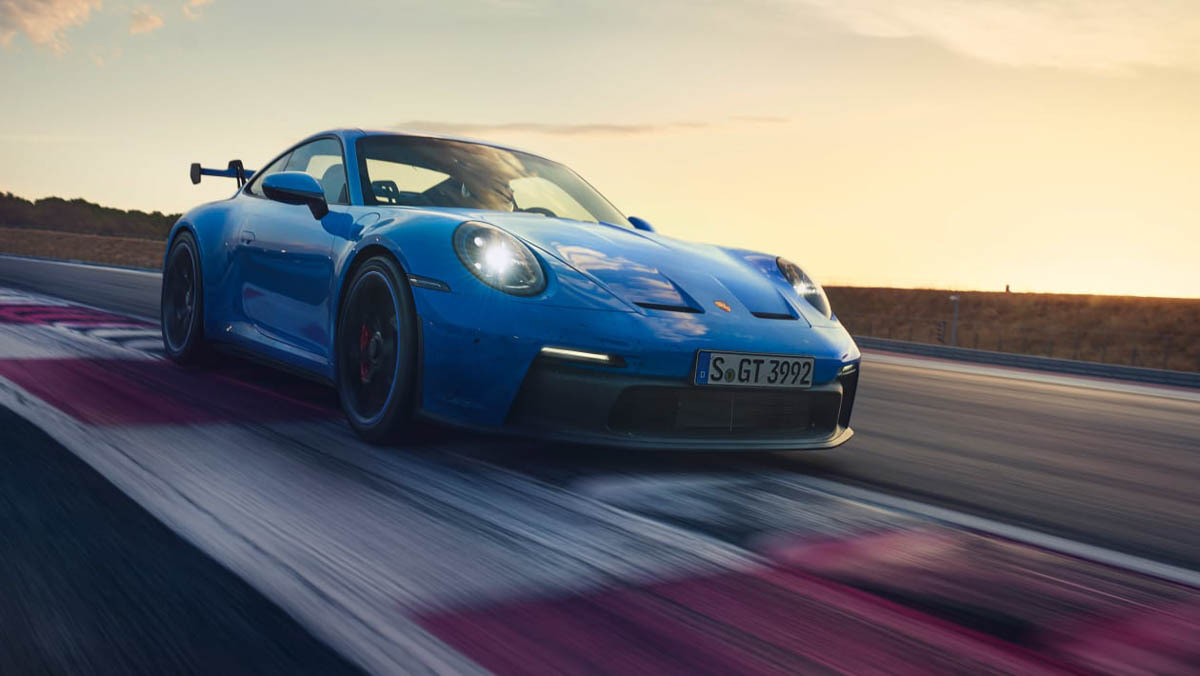 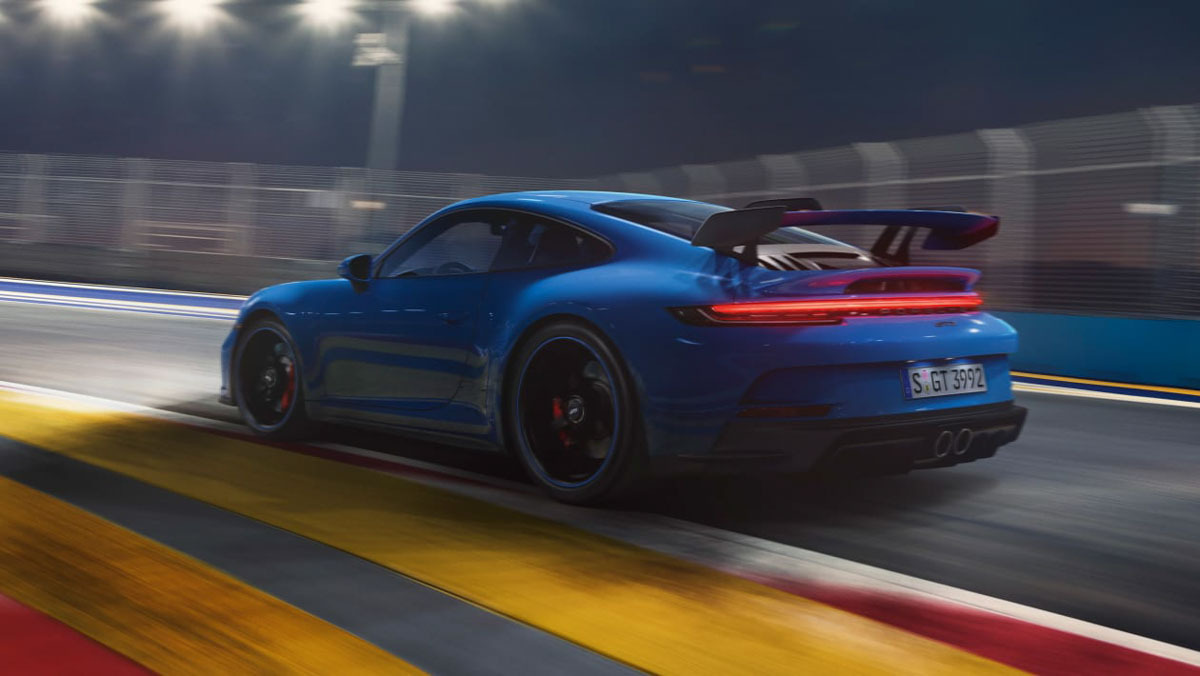 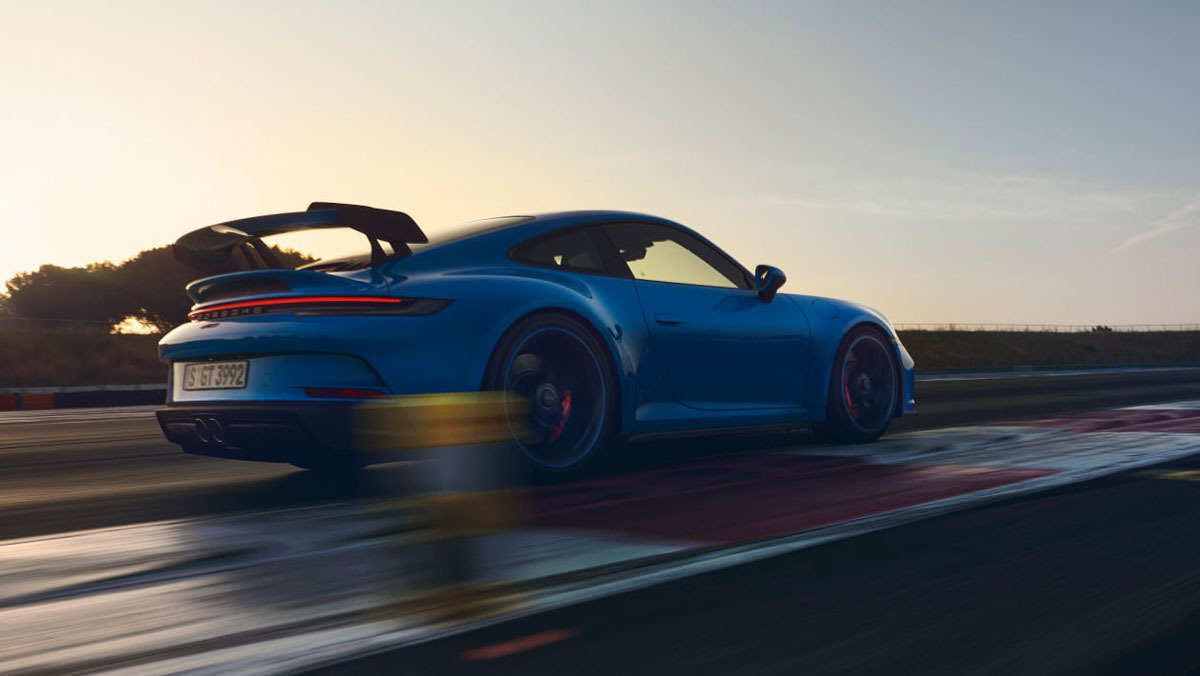 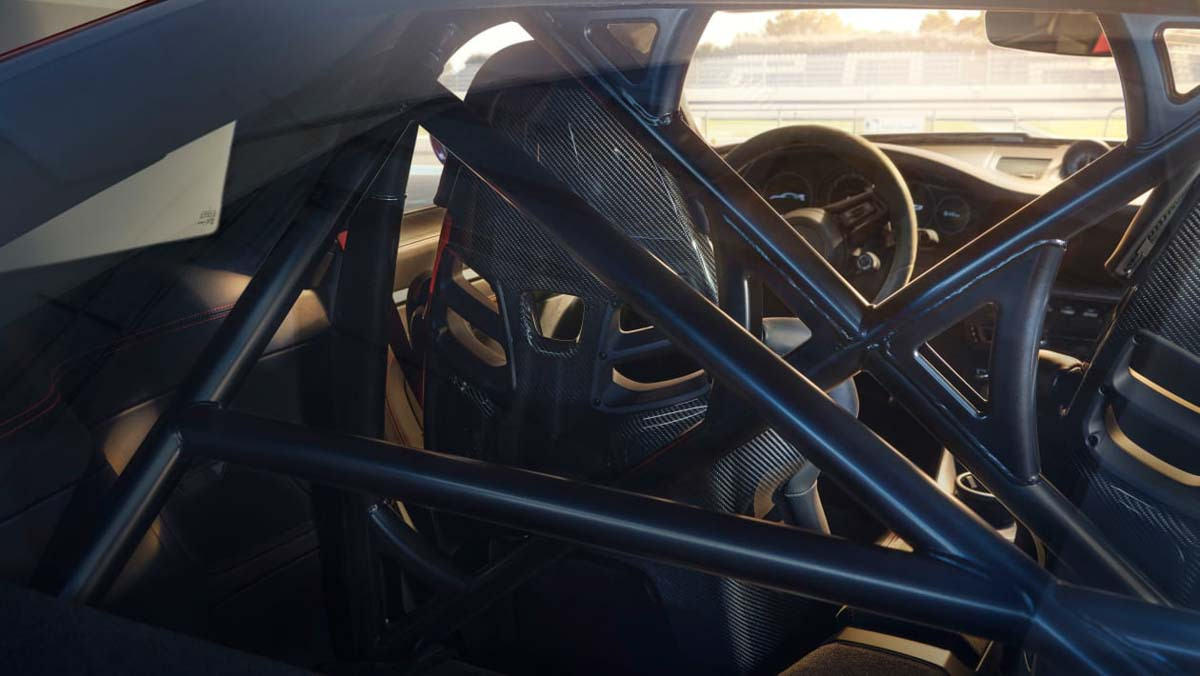 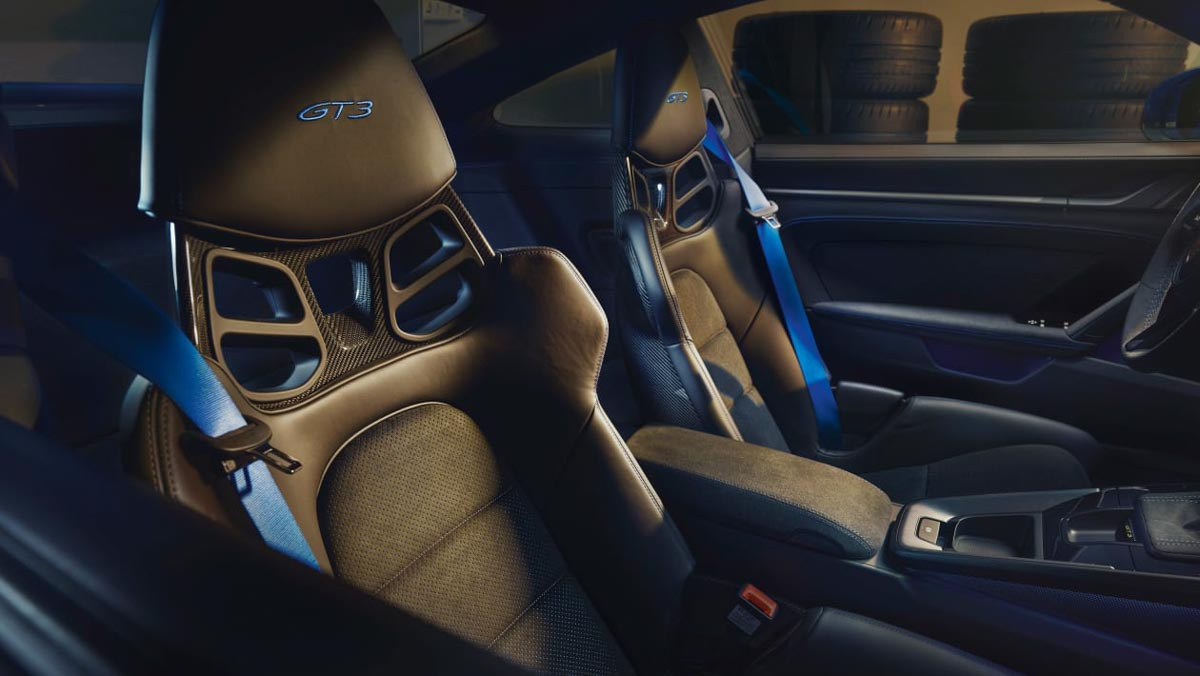 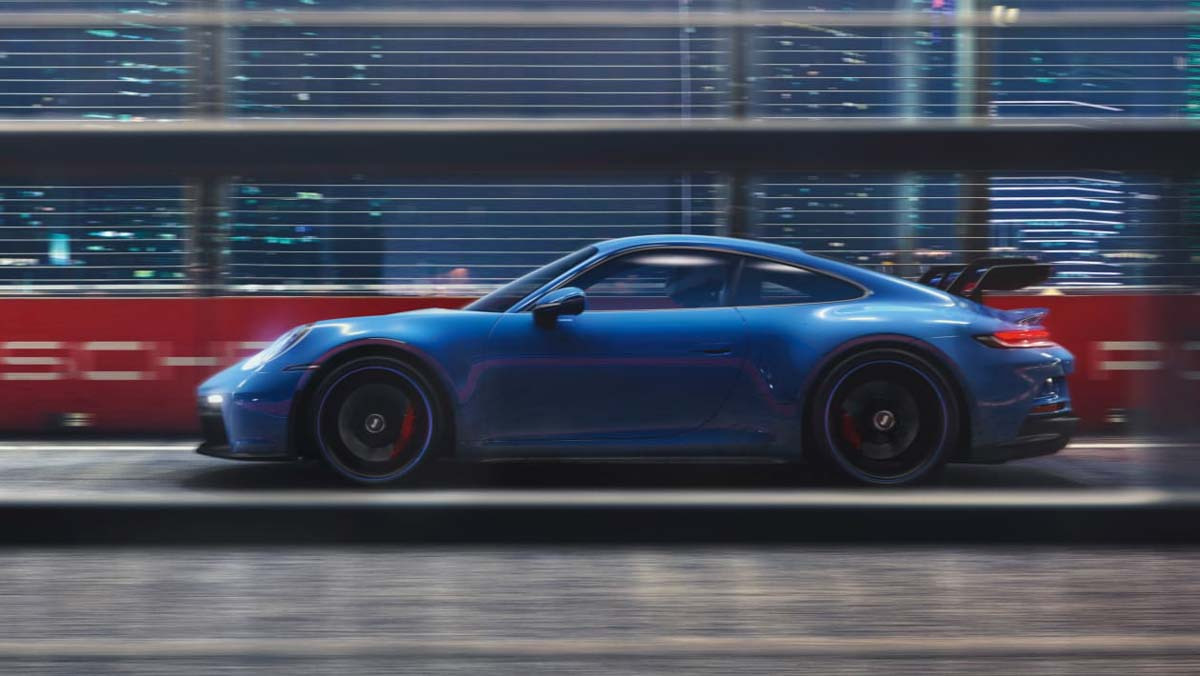 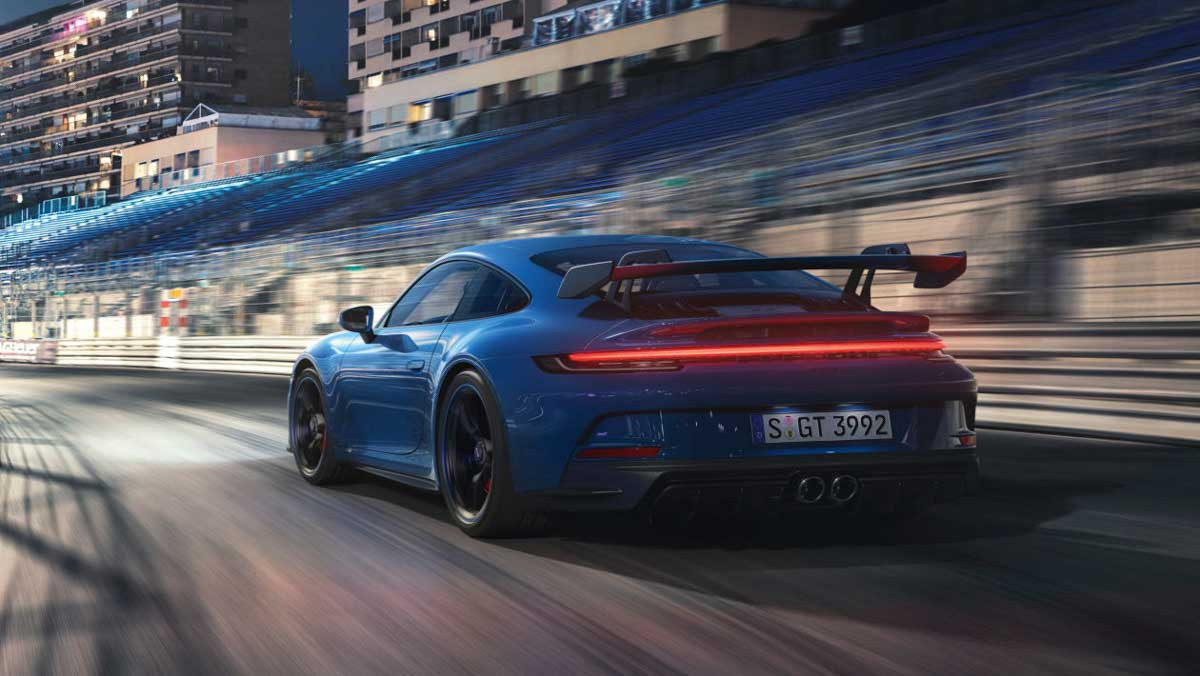 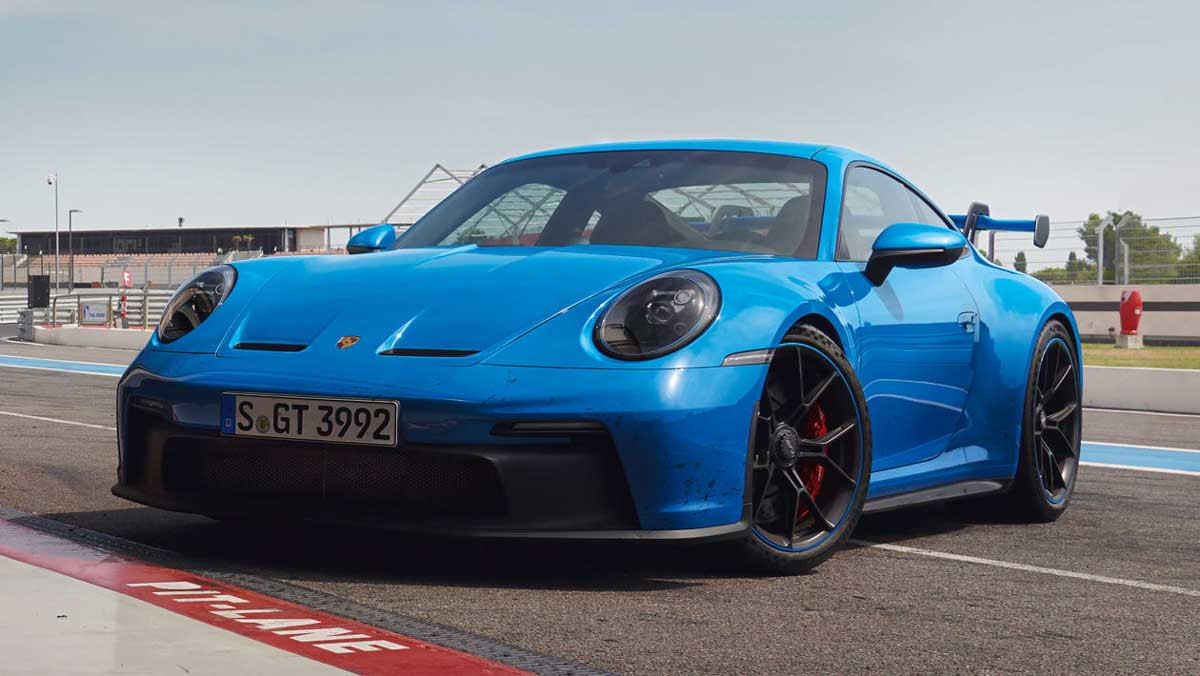 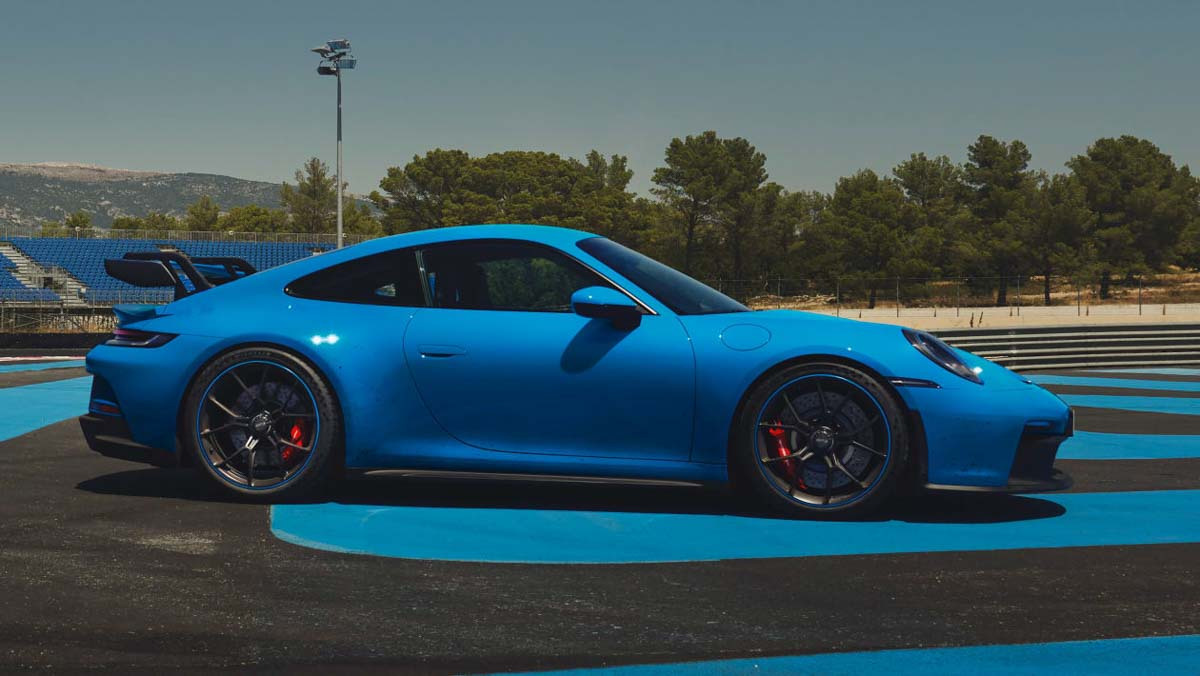 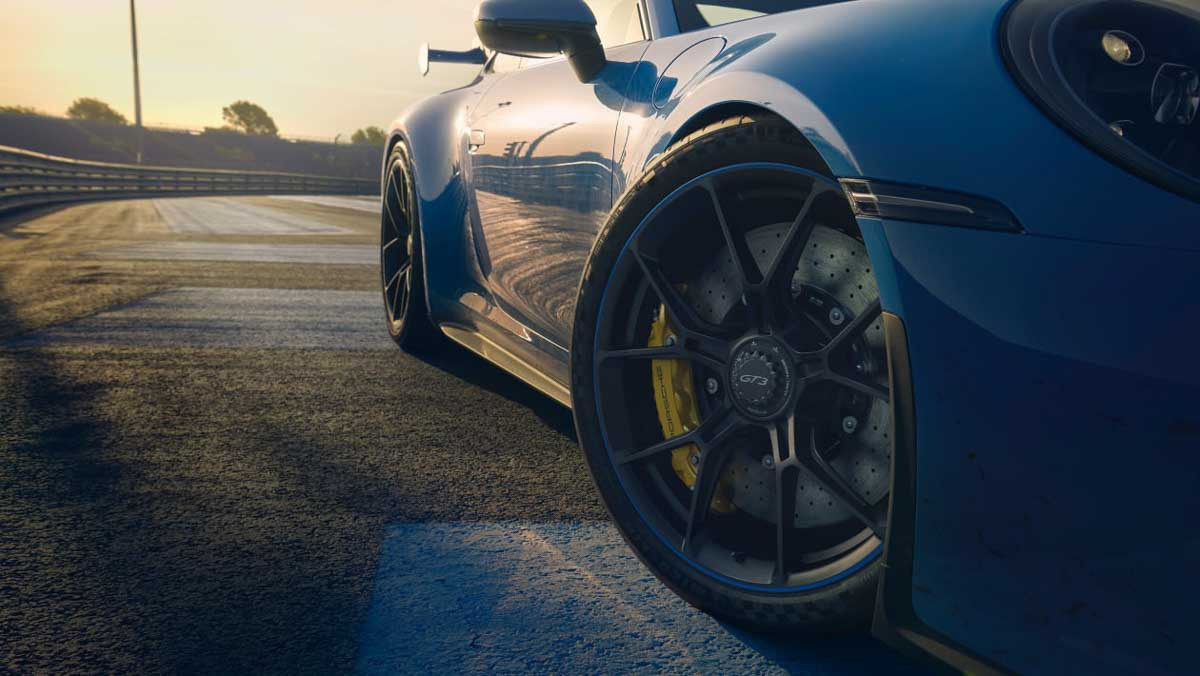 The new 992-generation GT3 is powered by the same four-litre flat-six engine the Motorsport department fits to its GT3 Cup race car, power and torque are increased by a marginal 10bhp and 7lb over the previous generation car to 503bhp and 347lb ft respectfully. It remains rear-wheel drive, naturally, and is offered with either a six-speed manual or seven-speed PDK transmission.

Built on the same production line as the race motor, the new GT3’s dry-sumped four-litre (102mm bore x 81.5mm stroke, 13:3:1 compression ratio and an 9,000rpm redline) features the same six-barrel throttle bodies and intake as the racer, as well as a new stainless steel exhaust system that’s 10 kilos lighter than the 991.2 GT3’s.

With two gearbox options offered, Porsche expects a similar 40/60 sales split in favour of the PDK unit, although in the United States it is expected the take up will be closer to 70 per cent, as it was with the previous model. “We were a little surprised by how high (the) manual gearbox uptake was on the 991 model especially in the US”, explained Frank Walliser, Porsche’s Vice President for Motorsport and GT cars. “The decision to offer the manual gearbox was directly from customer feedback. We do listen!”

While the six-speed gearbox has changed little from the unit installed in the second generation 991, the PDK is what Porsche calls its ‘Sport’ gearbox. While first and seventh ratios are similar to the 991 (the 992’s PDK ‘box is now an eight speed unit), second to sixth are shorter and the shift speeds in the unit’s ‘normal’ mode are the same speed as the Carrera PDK’s Sport mode. The GT3’s PDK is also 18kg lighter than the newer unit fitted to the 992 Carrera models, primarily because it has one less gear.

Regardless of transmission selected both variants also include torque vectoring, with manual cars fitted with a mechanical limited slip differential, whereas PDK cars are equipped with an electronic LSD. At 1435kg, PDK cars are also 17kg heavier than those fitted with the manual gearbox. The difference in off the line performance between the two is less narrow, with the manual car reaching 100kph in 3.7sec, half a second behind the PDK car. The margin grows to nine-tenths when the cars reach 160kph (7.0 v 7.9sec).

Along with its engine, the new GT3 also shares its front suspension with a model from Porsche’s Motorsport department. For the first time, Porsche has fitted the 911 RSR’s double-wishbone front suspension to a road-going model, a setup that helps keep more of the tyre’s contact patch on the road when under high lateral forces. Rose-joints are used throughout too, and there are also integrated helper springs. In order to maximise the benefit of the performance from the double-wishbone set-up at the front the multi-link rear suspension is totally revised, too.

While the front suspension is all rose-jointed, the multi-link rear utilises a combination of both bushes and unilateral joints. Damping and spring rates have been set up to reduce body roll, pitch and dive under braking and acceleration, and the ride height is 20mm lower than a Carrera S. However, by using the latest PASM damper technology from the current 992 it has allowed for a wider operating bandwidth for the damper when it comes to tuning the chassis, which should, claims Porsche, result in the new GT3 not sacrificing any of its on-road performance in order for it to excel on track. This despite the spring rates almost doubling. Porsche’s electromechanical power steering has also been revised further still for the new GT3.

Larger 408mm cast-iron discs (up from 380mm) are fitted to the front axle with six-piston calipers, with 380mm rotors and four-pots on the rear. While Porsche’s ceramic setup (PCCB) will be optional, the cast discs are 17 percent lighter than their predecessors. These lighter brakes sit behind 9.5 x 20- and 12 x 21-inch wheels (front/rear), which are fitted with a 255/35 and 315/30 Michelin Cup 2 as standard, with the more track focussed Cup 2 R an option. The R tyre was fitted to a PDK equipped car to set the Nürburgring lap time on. And while Porsche didn’t set a comparable lap time with the regular Cup 2s, it anticipates the R is worth between three and four seconds per lap.

Another contributing factor to the GT3’s performance is, of course, downforce. To this end there is a four-stage adjustable splitter at the front and a new rear wing, which sits on a swan neck support and has an equal number of adjustments. Combined with the new flat floor, front splitter and wider lip spoiler, and rear diffuser the new GT3 generates up to 160 percent more downforce. Even in its lowest downforce setting it is a near match for the 991.2 GT3 RS, thanks to the rear wing being 15-20 percent larger.

Driver aids are relatively straightforward with the option to turn the Electronic Stability Control off and leave the Traction Control on, or switch both off.

Carbon fibre reinforced plastic is used for the front bonnet, which Porsche believes to be the first to comply with pedestrian impact regulations, a core requirement for all cars when 1000 or more examples are planned for production.

Inside, the interior and instrument binnacle have been taken from the latest Carrera models, with the latter gaining an additional feature that allows the instrument display to be reduced to just a single centrally positioned rev counter when Track mode is selected. You might also spot that the PDK’s gear shifter is very close to the design of a manual gear lever, this is to provide as natural shift action as possible for those who like to change gear manually in a PDK but not use the paddles, people like Andreas Preuninger. Although his boss, Frank Walliser, prefers to use the paddles.The roll cage is optional, by the way.

The engine, the aero, the philosophy of the new 911 GT3 is on a par with the company’s GT3 Cup race car, but how close is that relationship? The body in white for both cars are built on the same line, so too their 4-litre flat-six engines (the race car’s gearbox is totally bespoke). With the double-wishbone front suspension, swan-neck rear wing and rear diffuser all taken from the RSR racer the road car isn’t lacking in bonafide motorsport DNA. And then consider that this GT3 was co-developed with the Motorsport department from the off, benefitting from the largest investment in such a model Porsche has ever made. Regardless of what is going on in the automotive world around electrification and the future of internal combustion-engined road cars, it’s clear that Porsche has no intention of slowing down when it comes to the GT3’s development.

Previous ArticleWill synthetic fuel save the performance car? The manufacturers weigh in
Next Article New Mercedes CLS revealed – four-door coupe gets a refresh