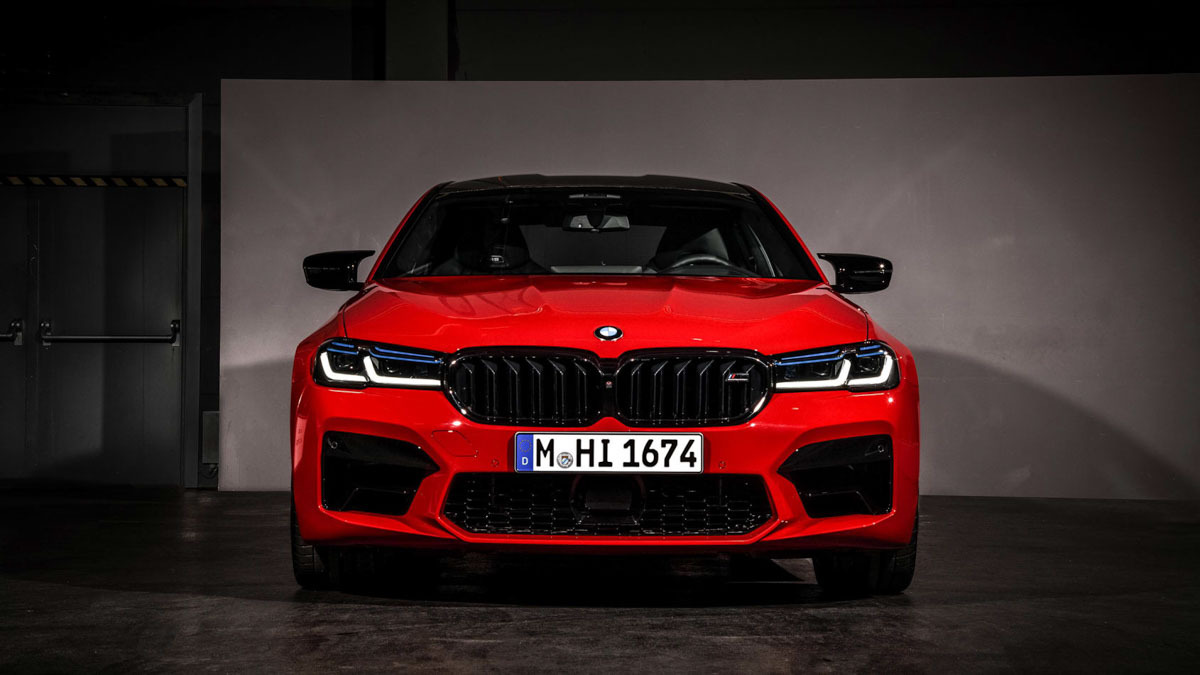 The BMW M5 Competition has been updated alongside the rest of BMW’s 5-series range, picking up subtle aesthetic, tech and suspension revisions. The M5’s underlying mechanical package is familiar from the current M5, featuring the 616bhp twin-turbo V8 and all-wheel-drive system, and as before will only be available in $123,099 Competition form.

The M5 Competition’s suspension updates have been focused on new adaptive damper rates on the coil spring set-up. As a refresher, the BMW’s standard use of a traditional coil spring set-up (on a double wishbone and five-link rear axle design) differs from the standard air suspension systems found in the Mercedes-AMG E63 S and Audi RS6 Avant (although the latter can be optionally fitted with clever hydraulically cross-linked dampers and coil springs), fostering a more connected feeling to the tarmac.

BMW’s also fitted a new ‘M Compound’ brake package to the M5 Competition, with discs significantly lighter than the previous cast iron units, and now finished with a red caliper – blue and black calipers are also still available. An optional full carbon-ceramic package complemented with a golden finish to the calipers remains, reducing unsprung weight by a further 23kg.

Otherwise the technical package is largely unchanged from before, utilising the 4.4-litre twin-turbocharged V8 engine now familiar from the M8, X5 M and X6 M Competition models. As with those flagship performance variants, peak power is rated at 616bhp at 6000rpm, with peak torque at 553lb ft between 1800 and 5300rpm. This first puts the M5 (for now) 24bhp and 13bhp above the Audi RS6 Avant and AMG E63 S respectively, although the Merc still trumps both for torque by 50lb ft. Together with the standard-fit eight-speed ZF-sourced torque-converter automatic transmission and M xDrive all-wheel-drive system, the new M5 Competition will get to 100kph from rest in 3.3sec and hit 200kph in just 10.8sec. The M5’s top speed is limited to 250kph.

Also like before, the M5’s all-wheel-drive system is heavily rear-wheel biased, with most of the power sent exclusively to the rear wheels, depending on the chosen drive mode. Torque is split between the axles by a multi-plate clutch, and then again on the rear axle by a torque-vectoring and locking rear differential. The front axle is also able to be completely decoupled from the system, making the M5 rear-wheel drive, but this system is only functional with all the active safety aids switched off.

Other chassis updates over the standard 5-series include bespoke engine mounts, new ball joints within the front suspension replacing the usual rubber mounts, increased camber on all four wheels and a standard-fit 20-inch wheel and tyre package. An M valved exhaust system is also included, paired with an augmented engine note pumped in through speakers in the cabin.

Speaking of the cabin, BMW has subtly revised colour and trim options inside, but replaced the previous infotainment screen with a bigger 12.3-inch touchscreen unit, paired with iDrive’s typical rotary selector and physical switches. Outside, new front and rear bumpers and lighting units make for a more dramatic change compared to the previous M5, with slimmer, darkened Laserlight LED front lights now defined with a blue ‘eyebrow’, paired with a slightly larger grille and bookmatched geometric vertical slats.

The changes, although subtle, should keep the M5 looking fresh against the Audi RS6 and Mercedes-AMG E63 S, the latter of which will be revealed with its own, more substantial update later this month.