Big, heavy and very quick, the M8 Convertible gives away little to the Coupe, but hefty price puts it against stiff competition 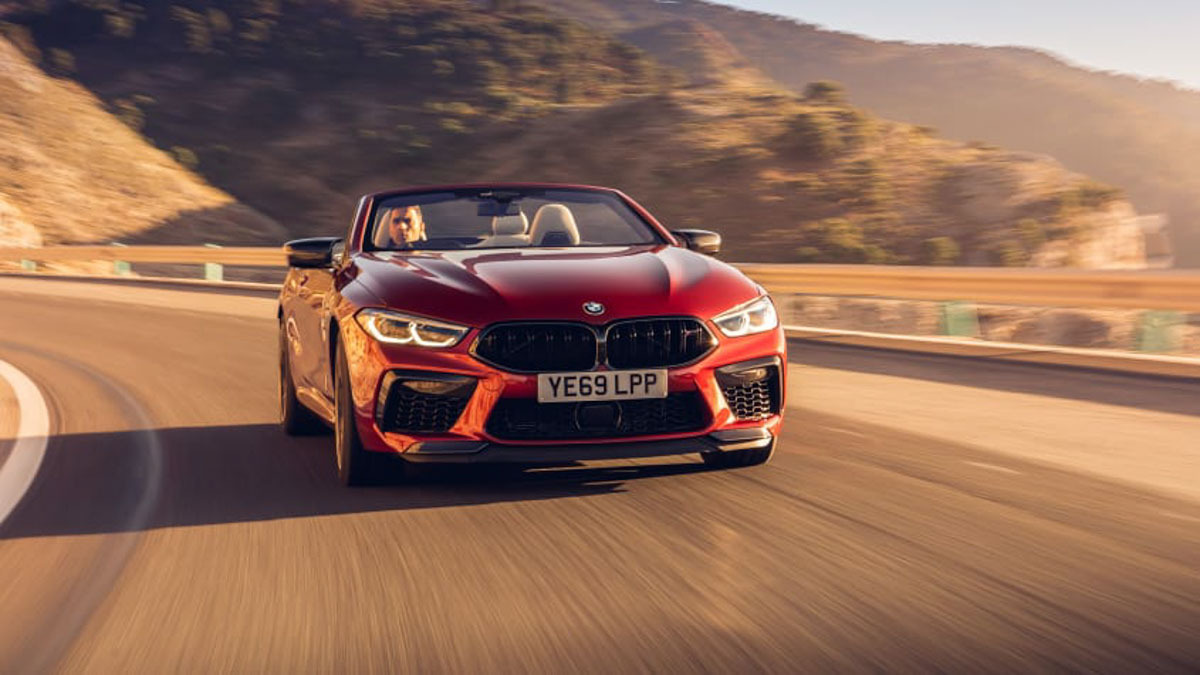 BMW’s original 8-series never got a bona-fide M variant, but never one to miss out on a niche, that’s all changed with the latest car and the M8 Competition.

As with the outgoing 6-series, there are Convertible and Gran Coupé versions of the new car too, and in M8 Competition Convertible form you can pair BMW’s luxurious range-topper with roof-down motoring, and a V8 making more than 600bhp.

We sampled both coupe and convertible M8 Competitions on the car’s launch in Portugal, but this is our first taste on local roads. With a kerb weight not far off two tons and a price tag that puts it among much more exotic machinery, does the M8 Competition Convertible still have merit?

In Competition form, BMW’s 4.4-litre twin-turbo V8 gets you 617bhp these days, which BMW says makes it the most powerful engine yet offered in an M-division car. It’s not short on torque either, twisting out 553lb ft from 1800 to 5800rpm.

xDrive all-wheel drive is standard, with a rear-biased nature and electronics that can apportion torque to the wheels that need it most – including, if you press the right combination of buttons for drift mode, the rear wheels alone. An eight-speed automatic transmission handles shifting duties.

Ensure that power is going to all four wheels and the M8 Competition Convertible’s accelerative performance is proper supercar stuff – just 3.3sec to 100kph, though top speed is limited to 250kph. BMW does offer an M Driver package to lift that to 304kph, though the value of doing so with a convertible is open to debate.

The cleverest bit of tech on the M8 Competition Convertible is what BMW calls its ‘integrated braking system’. It’s not dissimilar to the system used by Alfa Romeo in the Giulia and Stelvio, and uses an electronically actuated, rather than vacuum, booster to generate pressure in the braking system.

The system is lighter and quicker-reacting than a conventional braking system. While Alfa uses it to keep the pedal firm even if the brakes may be fading, BMW focuses on the benefits for pedal feel – and offers drivers the option of comfort or sport settings, the former feeling more relaxed for road use, the latter offering a firmer pedal and quicker response.

The M8 Convertible also uses BMW’s carbon core technology, but don’t make the mistake of thinking this is a lightweight car. It tips the scales at 1935kg.

It may wear Competition badging, but the M8 Convertible is, like its coupe equivalent, definitely more grand tourer than sports car.

And it does the former job rather well. Without driving coupe and soft-top side by side you’d struggle to think of areas in which the convertible was lacking in terms of comfort or refinement. Top up, it’s as cosy on a mid-winter day as the fixed-roof car, and even with the roof down you’re unlikely to be troubled by the wind. Perhaps most impressively, there seems to be little structural compromise to the roofless model – despite driving on some fairly patchy B-roads, I didn’t once notice shakes and shimmies through the structure.

The easily accessible performance of the V8, a smooth gearchange and a ride quality that feels best matched to larger A-roads and motorways also contribute to the long-legged GT feel, and while the cabin design itself is perhaps a little uninspired, the materials, comfort and sense of integrity are all top-drawer stuff.

Up the pace and the M8 copes well at first, xDrive deploying considerable power with minimal effort, there’s good weight and response from the steering, and powerful brakes to offset the ample punch.

There’s huge grip too, though your ability to exploit it depends partly on the road surface and partly on how much road width you have to play with. The M8 never shrinks around you like some larger cars manage to, and on certain roads the rhythmic thud of catseyes will be a constant companion. Rougher or uneven surfaces start to trouble the car too, with crests and compressions in particular betraying the car’s considerable weight with an unhappy lurch.

You’d struggle to tire of the M8’s performance, the V8 delivering a lunge towards the horizon that never really lets up, and traction that makes light work of standing starts even on streaming wet roads.

The gearshift is swift too, and while paddles remain the best way of imparting some kind of driver interaction, it’s really not bad simply left in the Sport auto mode, generally picking the right gear for a given corner. The main letdown is the V8’s voice, its slightly characterless tone perhaps a victim, like some others we’ve driven recently, of the muffling effects of petrol particulate filters.

M8 Competition Convertible pricing starts at $163,210, or exactly $8750 more than the M8 Competition Coupé. This for us is something of a sticking point, as it’s within the same ballpark of some truly exciting and appealing cars, from the $158,800 Aston Martin Vantage Roadster, to the $171,410 Audi R8 Spyder.

One further car stands out too, and it’s a rivalry from within. BMW’s $159,000 i8 Roadster offers less performance than the M8 Competition Convertible, but is barely less practical (the M8’s rear seat space is luggage room only and the boot’s unimpressive too) and far more distinctive than the M8. It’s also rather a fine grand tourer in its own right.