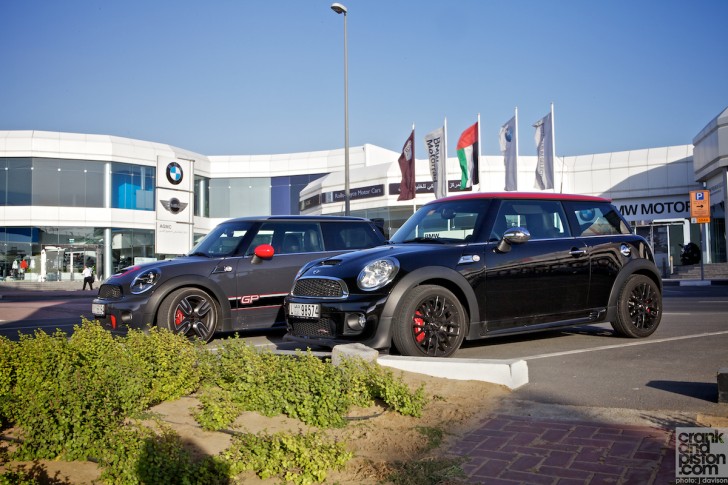 There is, as you can imagine, more to this game of spot the difference than two different paint schemes would suggest. One of these MINI Coopers has four seats while the other has only two. One has a manual transmission, the other does not. Both, granted, are products of MINI’s performance division John Cooper Works – co-founder of the Cooper Car Company in the late-1940s and architect for the original Mini Cooper – but while one was designed to lap the Nurburgring in under eight and a half minutes, the other was designed to be a city-street run-around, albeit with a bit of added bite.

Perhaps most significantly, whilst one costs in abundance of $47,372, the other comes in at a slightly lower (though still considerably lofty) $43,561. And you may be surprised which one I’m referring to here. 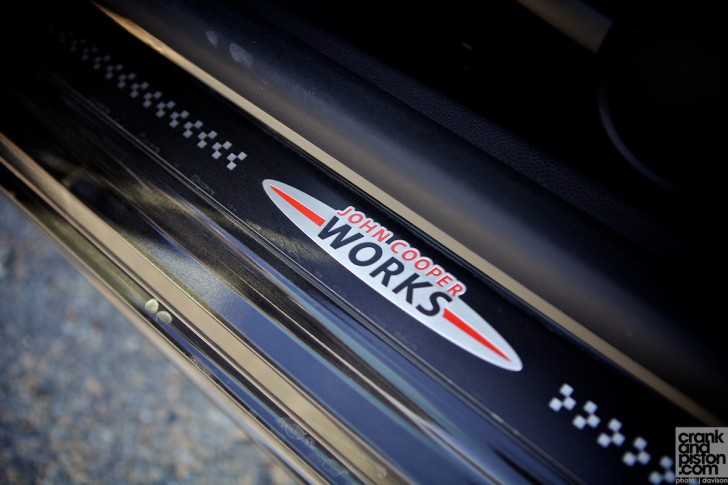 The racing-themed accoutrements that normally adorn ‘the sportiest and fastest model’ a manufacturer has ever produced – which is anything from racing stripes and aluminium pedals to a roll cage and Recaros – usually brings with them a hike in the asking price. The reason here is that the extra development required making the model faster and significantly more chuckable (and consequently more limited). So when the crankandpiston crew arrived at MINI’s main dealership in Dubai to collect our John Cooper Works pairing for a twin test – a MINI John Cooper Works and a MINI John Cooper Works GP – we expected much of the same. Imagine our surprise then when the stripped out, harder-edged, ‘look at me’ GP model turned out to be the cheaper of the two.

This semi-bombshell did somewhat knacker our plans for the day, prepared as we were to see ‘how much more car you get for an extra $4k’: turns out in this case the answer is, ‘well, rather a lot actually’. 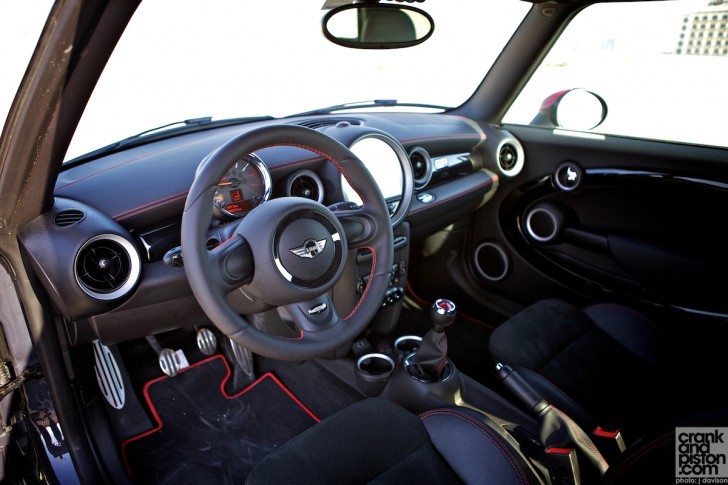 I’m still musing this point as we set off (that’s myself and crankandpiston colleague/namesake James, by the way) towards our hooning patch for the day on the outskirts of Dubai, me in the GP. The red-roofed JCW on point for instance has as part of its optional extras the Chill Pack, bringing with it all-leather seats, a sports steering wheel, MINI/BMW infotainment system (controlled through an extraordinarily delicate rotary dial down by the hand-brake), sat-nav and automatic headlights. The GP meanwhile, in an effort to save weight, has none of those things. Save lashings of red about the seat stitches, seatbelts, torsion bar where once there was two back seats, and car mats, there is just MINI’s traditional centre-console mounted over-sized speedometer and a BMW-spec radio. And that’s it.

I sink deeper into the suede seats though knowing I have an ace on my spec-sheet: a six-speed manual transmission. Performance after all is the name of the game with the GP, as the front splitter, taillip rear spoiler, restyled air intakes and rear diffusor suggest. Both of our test models are powered by MINI’s now traditional 1.6-litre turbocharged four-cylinder powerplant, and both – rather interestingly – chuck out 218hp and 206lb ft of torque. But while the JCW will hit 100kph off the line in 6.7 seconds, the GP does so almost half a second quicker in 6.4 seconds. When the JCW runs out of steam at 235kph, the GP keeps on going to 242kph. 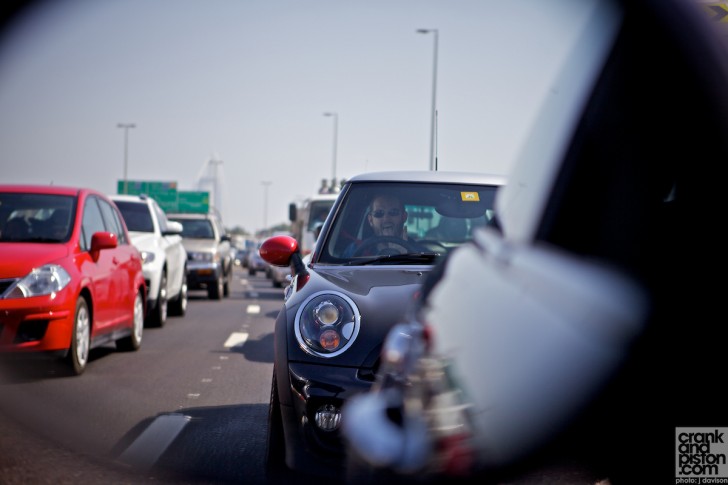 All very promising then, but the quite hideous afternoon rush hour our pseudo-Italian Job convoy has waded straight into means we’re as of yet unable to put them to the test. It’s a good forty minutes before we squeeze our way out of the bumper-to-bumper lockdown, during which both the JCW and GP receive their fair share of waves and thumbs up from our fellow motorists. It’s a pleasant change to what we’ve grown used to on Dubai’s roads: neither one of us for instance has sideswiped by a minibus not checking its mirrors.

In-keeping with its sporting nature, the GP is festooned with ‘GP’ monikers both on the dashboard and steering wheel in the cabin, on the bonnet, the alloys, along the doors and the tailgate. Racing stripes in red, white and black are plastered across the doors, the roof and bonnet. It’s not exactly subtle. It almost makes the near all-black JCW, complete with its 17-inch alloys, look elegant by comparison. But it’s all part of the fun, I suppose.