Feeding its 6-litre Ferrari-derived V12 with air, the MC12’s roof snorkel is the feature that helps nail its competition cred 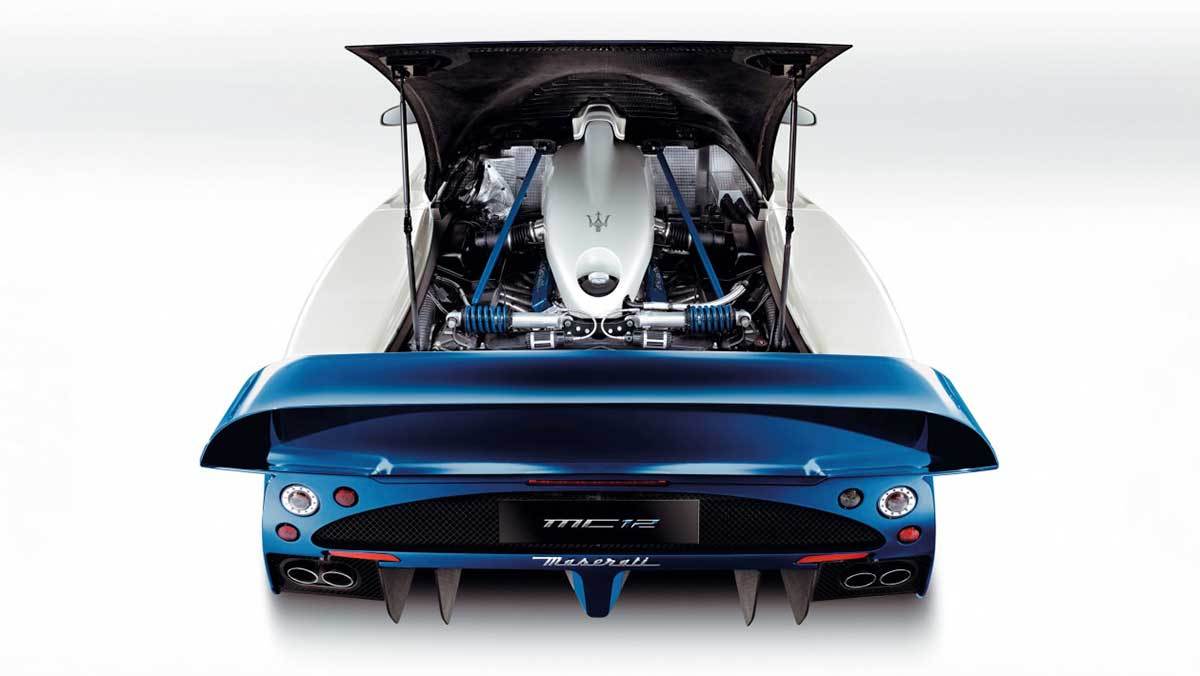 Curiously for a car that had no formal racing ambitions of its own, the Ferrari Enzo took a power cut and signed away all rights to retain figure-hugging clothes to become a ‘resource package’ for an enterprise that did: Maserati’s MC12.

Marking Maserati’s return to racing after 37 years, the MC12 immediately made GT1 grid line-ups more interesting. The imposing, mid-engined Masers began competing towards the end of 2004 and were soon scoring podiums, winning the manufacturers’ cup in 2005.

For the road, a 30-car production run was undertaken in 2004, with a further 25 rolling off the line in ’05. Built on the Enzo platform, the MC12’s external dimensions busted the Enzo’s in every direction but, thanks to some clever aero and largely carbon construction, the car achieved a lower drag coefficient, more downforce and weighed just 1335kg. And what a shape. With its elongated form and tarmac-sucking stance it looked every inch the road racer, not least because the bodywork boasted so many vents and ducts. The deep, tapered apertures for the nose-mounted radiators were dressed with longitudinal strakes on the road cars for safety reasons, but it was arguably the ‘snorkel’ scoop, located just behind the removable targa-style roof panel and directing cool air, via an airbox plenum, to the 6-litre V12’s induction system, that nailed the MC12’s competition cred.

Maserati must have deemed the snorkel important, because it removed the last vestige of rearward visibility, forcing the driver to rely on the door mirrors. Whether it was strictly necessary is open to debate. In a higher state of tune (651 v 621bhp), the Enzo’s engine satisfied its aerobic requirements with air captured solely by side pods. For the MC12, though, the scoop assumed a crucial part of the car’s racing identity, the aperture and ‘neck’ visible above the roofline and swelling into an unnecessarily magnificent objet d’art of an airbox, bearing the trident badge and dominating the engine bay as a gleaming silver carapace.

Ironically, as a road car the MC12 wasn’t as raw and exciting as the Enzo, with an oddly restrained engine note and more than tolerable ride. All right, there was no stereo and some racing hardware was barely disguised: the exposed roll-bar, the black-painted bulkhead behind the seats. But the fundamentals were spot on. It was easy to get properly positioned behind the wheel in a superbly supportive seat, and the relatively upright, slightly bowed A-pillars made it easy to see out and accurately position the car. But for the fact that its luggage capacity amounted to whatever you could stuff into your pockets, it would have made a fine long-distance travelling companion.