Ferrari’s final mid-engined, naturally aspirated hypercar, the Ferrari Enzo is one of the brand’s best ever. 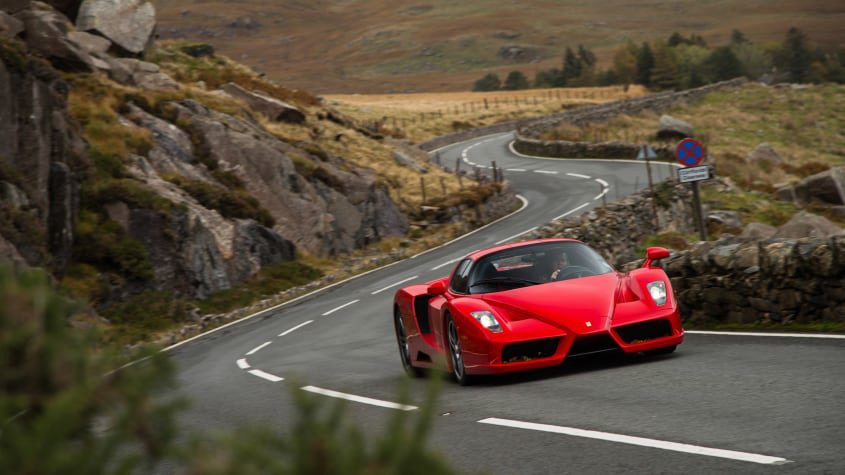 The Rolls-Royce Charles, TVR Trevor or Aston Martin Lionel wouldn’t have quite the same ring to them, but Ferrari Enzo seems to trip off the tongue as easily as if the founder’s name was read in the correct direction. It was a bold move for Ferrari to name a car after its founder, but the Enzo was a bold car, follow-up to the F50 and more technologically advanced than any Ferrari short of the firm’s Grand Prix cars at its launch in 2002.

At that time of maturing engine technologies, the Ferrari Enzo perhaps best represented the breed of naturally aspirated, mechanical hypercars built before today’s thick veil of electronic intervention had fully materialised. With 650bhp, a claimed 3.1s 0-100kph time and a 350kph top speed, the Enzo had figures that spoke for themselves.

It also ticked all the other boxes you’d expect of a limited-run model (Ferrari made just 400 units) from one of the world’s most desirable brands, from its spectacular styling to a heart-stopping $600,000 price – though anyone who got in on the ground floor has made a mint considering what Enzos now change hands for.

If they’ve not driving their cars though, they’re missing out. While the Enzo is not our favourite Ferrari, that’s only because others – 288 GTO, F40, F50 and LaFerrari – have been quite so spectacular in their own rights.

The term hypercar is one only coined in recent history, but in truth Ferrari has been making them since before the word was invented, not as an exercise of pride, but to fund Enzo Ferrari’s passion for racing. As such, the linage preceding the Enzo is a distinguished one. The first of the Enzo’s direct forbears arrived in 1984, when Ferrari introduced itself to turbocharging with the 288 GTO.

Like the first Ferraris, the 288 GTO was designed specifically as a homologation special, in this case allowing Ferrari to compete in an upcoming Group B race series. This model took the bones of a series-production Ferrari 308 GTB, but replaced its transversely mounted 3-litre V8 for a twin turbocharged 2.9-litre V8 positioned longitudinally. Carbonfibre and Kevlar bodywork featured for the first time on a Ferrari, essentially creating the company’s first hypercar.

The 288 GTO was genesis, but it also formed the base of one of Ferrari’s most iconic models, the F40. Launched just four years after the 288 GTO, the F40 was not designed for the racetrack, instead it was made to thrill on the road. Named to celebrate Ferrari’s 40th birthday, it was also the company’s first road car to be based around a carbonfibre chassis, with subframes carrying the drivetrain and suspension components.

Heralded for its exquisite driving characteristics and intense twin-turbo V8, the F40 was a tricky model for Ferrari to supersede, and the car they did it with felt the heat right from its introduction. In 1995 the F50 dropped the turbocharged V8 engine in favour of a highly strung V12, itself a development of Ferrari’s contemporary Formula 1 engine. The F50 was criticised in some quarters for its harsh engine and tricky driving dynamics, but it again represented distinct progress for this Ferrari model line.ADVERTISING

The Enzo, launched in 2002, took lessons learnt from each of the aforementioned iconic models to form the basis of what was by now called a hypercar. The Pininfarina-styled body might not be the most classically pretty design to come out of Modena, but the Enzo’s sharp detailing and Formula 1-derived aerodynamics informed the design to an extent unseen in previous Ferraris.

Without the large rear spoilers of its predecessors, the Enzo instead used clever aerodynamic tools to produce downforce and eliminate lift. The low, angular front helped pin the nose of the car down in faster corners, while the rear diffuser and flat floor negated the need for a large rear spoiler. At speed, a smaller rear spoiler would still rise to assist the rear aerodynamics.

Limited to a production run of just 400 units – the final build model was gifted to the Pope – the Enzo eventually went on to form the basis of the track-only FXX. Maserati created its own derivative using the same component set, calling it the MC12. The MC12 was limited to 25 units, although its main purpose was to homologate the MC12 race car for the FIA GT Championship.

The Ferrari driving experience has always had one dominating factor: the powertrain. The Enzo is the last naturally aspirated, non-electrically-assisted hypercar from the Italian manufacturer, and the V12 used was more than enough to satisfy the moniker.

Forming the foundation for every subsequent Ferrari V12, the F140 engine was introduced in the Enzo, at the time setting the record as the most powerful naturally aspirated engine in the world. With four valves per cylinder, dual overhead cams and variable valve timing, the Enzo produced a maximum power output of 650bhp and 485lb ft of torque.

The performance figures were rightly impressive, with the Enzo shooting to 100kph in 3.1 seconds and on to a 350kph top speed.

Harnessing this power is a six-speed automated manual transmission, a development of prior systems. Ferrari was able to upgrade the hardware and software compared with previous iterations to give the Enzo lightning fast shifts up and down, setting the template for its world-leading semi-automatic gearboxes.

Again based on the developments made in prior Ferrari hypercars, the Enzo’s independent double-wishbone suspension featured pushrod-actuated dampers that were adjustable by the driver. Braking was handled by Ferrari’s latest carbon-ceramic brakes, offering enormous stopping power without the threat of significant fade.

The Enzo offered a super-quick steering ratio, something that could only be supported by the immense front-end grip available, and although it is not the most feelsome steering set-up, it does offer extreme accuracy and is confidence inspiring.

Like its predecessors, the Enzo was designed to push the performance boundaries of what was possible in a road car. The interior treatment could be called ‘pared back’ as a result, with many surfaces in carbonfibre, and creature comforts such as electric windows and a stereo all sacrificed in the quest for a low kerb weight.

The notion of this era being the height of naturally aspirated engines was not one just inhabited by Ferrari. In 2002, rival manufacturers were also on the cusp of launching momentous cars of their own. From Mercedes–McLaren and Porsche came hypercars with corresponding performance capabilities to give the Enzo some proper competition.

Mercedes-Benz and McLaren had decided to progress their technical partnership in Formula 1 to create the contrived SLR McLaren. The carbon-bodied 617bhp hypercar utilised a version of Mercedes’ 5.4-litre supercharged V8 engine and a five-speed automatic gearbox. Although incredibly quick in a straight line, the SLR’s GT aspirations meant it was not as sharp to drive as the Enzo.

The Porsche Carrera GT was a bigger threat, itself utilising a spectacular naturally aspirated 5.7-litre V10 engine based on an abandoned World Endurance Car project. The Carrera GT matched the carbon-ceramic brakes, carbon tub construction and pushrod suspension of the Enzo. Although it had ‘only’ 603bhp, it more than made up for that by offering no shortage of driving thrills.

‘As the Enzo winds through the intermediate gears, revs flaring and tail shimmying as the meat of the torque arrives at 4500rpm, there’s the sense that even a grand and sprawling stage can be found wanting by the demands and performance envelope of our 350kph projectile. The Enzo is a big, broad car that fills its side of the road and more. You become familiar with the kerdug-kerdug-kerdug of the right-hand tyres slapping across the catseyes, and when you encounter oncoming traffic you instinctively breathe in as a ton-and-a-half of steel flashes by its precious composite flank.

‘I know this fast, wide, undulating B-road unfurling ahead of me, and just a three kilometers after firing up the Enzo I’ve got the traction control warning light flickering. This is, indeed, a mighty engine: docile and willing when you’re sauntering but ever-ready with a massive, electrifying slug of acceleration, whatever the revs. From tickover to 8000rpm is a fantastic rush, the thrust pinning you against the seat, the bellow of the V12 mutating from a heavy rumble into a spectacular howl.

‘As you’d hope, the carbon-ceramic brakes are more than equal to the task. They deliver sensational bite and haul off 50 or 60kph in an instant, as you flick the left-hand paddle to request a couple of blip-perfect downshifts before tucking the nose into the next apex. It’s crazy, intoxicating stuff, your pace seemingly limited only by your bravery, and the occasional intervention of traction control…’