Kia Stinger GT-S review – can the new GT do the business?

A surprisingly accomplished sports saloon – fast, well equipped and distinctively styled, with the ability to entertain 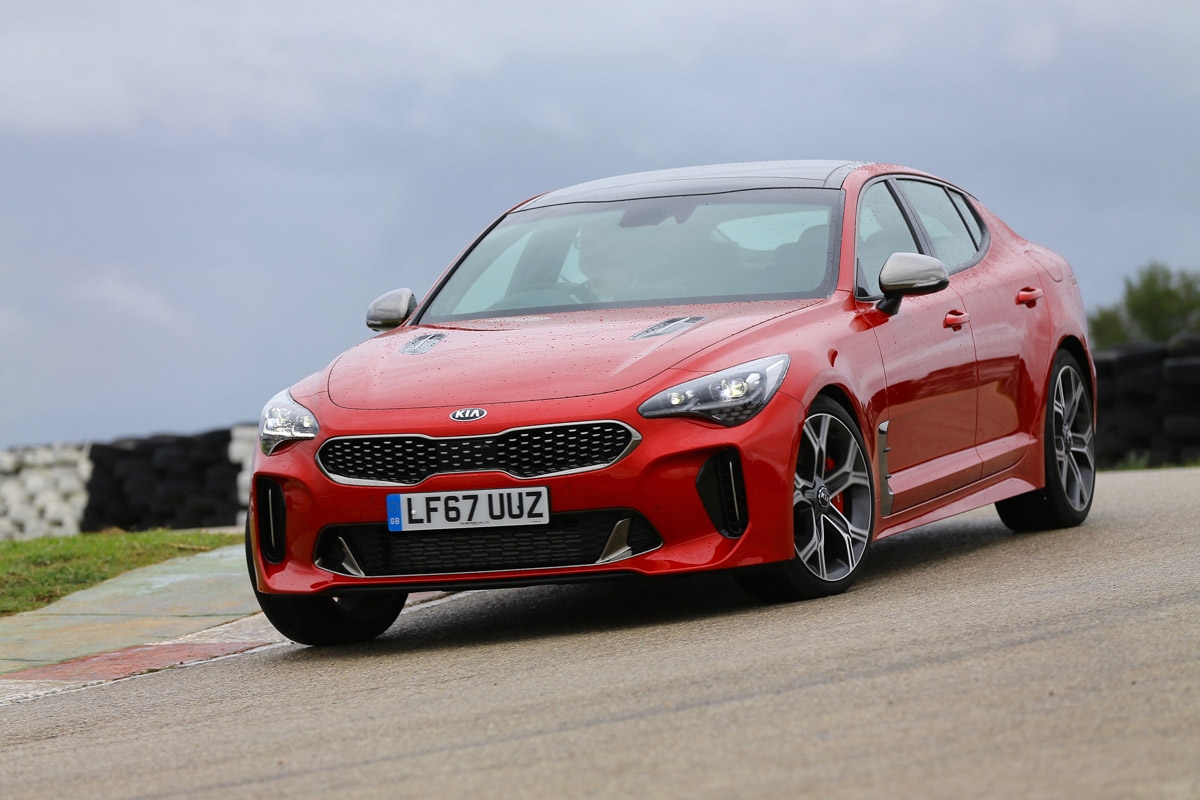 You probably know Kia as ‘that brand with the long warranty’. Its seven-year guarantee has made it popular with buyers looking for peace of mind rather than a good time, while its range of SUVs and family cars are big on value but low on thrills.

Things are changing at Kia, though. First there was the surprisingly accomplished Kia Pro_cee’d GT hot hatch, then the company poached BMW M Division’s Albert Biermann. The German has been hard at work over the last couple of years working on the i30N from sister firm Hyundai and now this, the Kia Stinger.

The Stinger represents a departure from Kia’s recent run of crossover models as it takes aim at premium saloons and hatchbacks such as the Audi A5 Sportback and BMW 4 Series Gran Coupe. The driving experience promises to back up these lofty ambitions – although bosses are keen to stress that the Stinger is a spacious and refined GT car that can turn on the charm when required, rather than an out-and-out sports saloon.

Diesel and petrol versions of the Stinger will be available in the UK, as will four-wheel drive, yet it’s the flagship rear-wheel drive V6 petrol that’s of interest to us. It’s a model that’s unique to Britain and has been developed to help lay the foundations for new generations of Kia models that promise to place the driver front and centre. Yet it’s not forgotten its roots just yet, because at £40,495 this 365bhp GT-S version comfortably undercuts less well-equipped rivals such as the Audi S5 Sportback and BMW 440i Gran Coupe.

Even so, that’s a fairly hefty chunk of cash to drop on a large five-door hatchback with a Kia badge. So in an attempt to lure buyers in (not many buyers it has to be said, with just 1,800 examples expected to find homes in the UK every year), designers have attempted to give the Stinger some distinctive kerb appeal. It certainly stands out from the crowd, but we’ll leave it to you to decide whether the mish-mash of Audi A7, Masertati 3200 GT and Kia Optima is a successful one. It’s a similar story inside, where the bold ambition is slightly undone by materials that aren’t up to the same standard as you’ll find in the German alternatives – the plastic key with moulded leather stitching is a case in point. Still, The Stinger is roomy and ridiculously well equipped, with a standard kit list that will have BMW owners weeping into their optional extras brochure.

Unlike all other V6-engined Stingers, which are four-wheel drive, UK versions are rear-wheel drive only. The decision was taken to give us this specification on the grounds that it would make the Kia a more agile and engaging proposition.

However, while losing the propshaft, front differential and driveshafts has helped trim around 100kg from the Stinger’s weight, it still tips the scales at a rather portly 1,780kg. In order to mitigate this mass, the GT-S is the only model that gets adaptive dampers, which can be stiffened in Sport and Sport+ mode, helping rein-in any untoward body movement. There’s also a Comfort setting, and a Smart mode that aims to react to your driving and quickly alter the damping accordingly.

Another feature unique to the range-topping V6 is the Brembo braking system, which uses larger discs (350mm at the front and 340m at the rear) and four-pot calipers for improved stopping and greater pedal feel.

Under the Stinger’s vented bonnet is the ‘Lambda II’ 3.3-litre V6 that can trace its roots back to the Hyundai Genesis executive saloon. The addition of a pair of turbochargers boosts power to an impressive 365bhp, while peak torque is 376lb ft, which is delivered in a flat line from an idle-like 1,300rpm all the way to 4,500rpm. The V6 is mated to an eight-speed automatic gearbox, which drives the rear wheels through a limited slip differential.

As you’d expect, there are a number of driver modes (Eco, Smart, Comfort, Sport and Sport+), with each ramping up the throttle response, steering weight, suspension firmness and gearshift strategy. Also included is a launch control function, which seems oddly out of place on a big saloon with grand touring aspirations.

The Kia is a bit of a heavyweight, but it disguises its bulk well when accelerating, with the 0-100kph sprint being dispensed with in a very brisk 4.7 seconds. Keep the throttle pinned to the floor and the Stinger runs out of puff at a claimed 270kph. These are numbers that will get a 440i owner sitting up and taking note.

Yet it’s the car’s thumping mid-range pace that leaves the biggest impression. Maximum twist is available from just 1,300rpm, meaning there’s virtually no turbo lag, and the Stinger simply surges forward like it’s been, erm, stung. From 1,500rpm until 4,500rpm there’s a sense of relentless reserves of energy, regardless of what gear you’re in – even eighth, which is geared at more than 64kph per 1,000rpm.

Of course you can rev the engine out to its 6,500rpm redline, but there’s really no point, because not only does the Kia feel so fast in the mid-range, the V6’s note is rather charmless when extended. There’s a sound synthesiser that adds a more gravelly tone, but it’s a rather unfortunately artificial sounding embellishment. Best to simply enjoy the unit’s low down thrust and refinement to make quieter but equally swift progress.

The eight-speed automatic is also a little uneven in its performance. Left to its own devices in comfort, the transmission slurs its shifts with the sort of near imperceptible smoothness you’d expect from a car emblazoned with GT badges. Twist the centre console-mounted driving mode dial into Sport and the ‘box holds onto ratios for longer and delivers snappier shifts. On the whole it responds well, but using the wheel-mounted paddles gives the greatest control, except that there’s no option to maintain the gearbox in this manual setting – leave the paddles alone for five seconds and the transmission reverts to auto mode. It’s a frustrating trait for a car aimed at enthusiastic drivers.

Kia is at pains to point out that the Stinger is a GT car first and foremost. Jump in and leave the car’s systems in Smart or Comfort and it’s clear the engineers have met this brief to perfection. What strikes you first is the ride, which is supple and well damped, taking everything from big bumps to potholes in its stride. There’s an underlying firmness around town, but it never becomes uncomfortable and the excellent dampers manage to round off even the sharpest surface imperfections. The car is quiet too, with both wind and road noise well suppressed, even when cruising at high speeds.

Yet there are clues that the Stinger has a more dynamic alter ego lurking beneath the surface. For starters, the driving position is set surprisingly low, while the major controls have a reassuring meatiness to weight and response. The Brembo brakes deserve special mention here, for they deliver both confidence-inspiring stopping power and a beautifully progressive pedal action.

Flick the car into Sport and you can feel the extra firmness in the dampers and more eager response to the throttle. The steering is reasonably quick and the front end responds crisply, with the combination of torque vectoring and grippy Continental rubber helping the Stinger stay locked onto your chosen line. There’s good traction too, in the dry at least, and despite the Kia’s large external dimensions and portly kerbweight, it feels remarkably light on its feet through a series of corners. Perhaps more surprising is just how throttle-adjustable and playful the Stinger can be. Relax the traction control’s grip on the rear wheels and you can use all that torque and the limited slip differential to trim the Kia’s line. Use more throttle and you’ll have well telegraphed oversteer on command – at this point you really have to pinch yourself that your driving a Kia that’s more willing to play the hooligan than any BMW this side of an M3.

That said, it’s not without its quirks. With so much mass to manage, the suspension struggles to contain body roll, even with the dampers in their stiffest setting. Weight also plays it’s part in the Kia’s on limit handling, where the car can get a little ragged – carry too much speed into a corner and the front end pushes wide sooner than in an Audi S5, while body movements aren’t as well checked as you’d like over mid corner crests or big compressions. The steering also requires work before it can match that of a 4 Series – the electrically assisted set-up is fast enough with decent weighting, but there’s precious little feel and when you’re really hustling the Kia there’s a curious vagueness just off the straight ahead. However, drive the car as Kia intended – as a GT that can also deliver some fun when the road allows – then the Stinger is a remarkably accomplished effort.

In truth, it’s unlikely that many BMW and Audi owners will make the trip to their local Kia dealer, but if they can put badge snobbery to one side they’ll find a remarkably capable car in the Kia. Sure it feels cheaper than the premium competition, but it’s priced accordingly. Crucially, what it lacks in premium appeal the Stinger makes up for with a genuinely engaging driving experience. It’s not perfect yet and there are still some quirks and foibles to be ironed out, but as first attempt at a proper, grown-up driver’s car the Stinger is a remarkably impressive achievement.