Can 650hp through the rear wheels be viable in today’s world? We find out with the latest crazy Camaro ZL1

Nope, that’s a word nobody could ever associate with the Chevrolet Camaro ZL1 – a beast of a machine that wears its thumping heart on its outrageous sleeve, one that intimidates just by looking at it. It represents a new kind of American muscle car. Think Sly Stallone on wheels. It’s a caricature, a statement, demanding to be looked at, as though designed by a committee of teenage boys who’ve drunk too much Red Bull, read too many comics and watched too many Michael Bay movies. It’s a politically incorrect automobile, positively barking mad.

The roads of the Middle East have, for many years, been perfect for American cars of all sorts. They’ve tended to be designed and built with only the arrow-straight highways of the US in mind with floaty handling, plenty of grunt and not much in the way of driver focus. As much as many Europeans have liked the styling of some of that country’s muscle cars and been tempted by low prices and engines that go “wub-wub-wub-wub” at a standstill, they’ve mostly been useless at carving up country lanes or, let’s be honest, any corners at all. That’s all changed.

To survive in the 21st century, American carmakers have had to widen the appeal of their models and that means making them handle all the firepower their V8s can muster. It’s worked, too, with machines like Ford’s recent Mustang selling out across the UK and other countries where they’d previously never been seen on the roads. The styling has, in general, been toned down to suit more conservative tastes and US manufacturers now boast about lap times at the Nordschleife rather than setting new records for driving the ‘quarter mile’ in a straight line.

This newfound ability to tackle corners at speed without ending up in the next county in a scream of tortured rubber and crumpling steel has meant American car companies have been able to turn up the wick when it comes to power outputs, tuning their venerable V8 lumps to produce apparently insane levels of horsepower and torque. The result has been machines such as the Dodge Charger (and Challenger) Hellcat, which offers power figures that appear to take the battle to Ferrari’s flagships. Does anyone actually need more than 700hp from a family saloon? Of course not, but the fact these cars exist should give cause for celebration, for they enrich the motoring landscape by their sheer bloody mindedness alone.

Naturally, Dodge’s arch rival, Chevrolet, was going to get in on the act and you’re looking at the Hellcat’s furious nemesis: a 650hp mad man that its maker promises us is properly sorted, able to exploit the kind of power and speed that, only a few years ago, was the preserve of the most expensive and rarest of supercars.

I’ve driven many hundreds of new cars in my career as a motoring journalist and, in recent times, have started musing on the culmination of this horsepower war that seems to be raging between manufacturers on either side of the Atlantic. Surely, I ponder, enough is enough? Surely it’s time to rein in the lunacy and dial things back down a bit, to bring handling finesse and entertainment to the fore, rather than outright pace. Yet mine appears to be a lonely voice in the wilderness and these carmakers keep renewing their gym memberships, building more and more muscle for their scary machines and dealing with the laws of physics so that even novices can (in theory) get behind the wheel of a fire breathing monster and drive it like they stole it, without a premature rendezvous with the Grim Reaper.

It’s at the forefront of my mind as I walk up to the Camaro ZL1 that’s waiting for me in the company car park. Its lurid paint job (imaginatively named Bright Yellow) makes an already crazy, cartoonish design sear my retinas. The humps and scoops, the spoilers and the dark painted alloys, the child bearing hips stretched over the widest possible track and the exposed carbonfibre addenda all conspire to scream: “Look at me, you feeble Brit! Come and have a go, if you think you’re hard enough! Get ready for a whole load of whoopass heading your way, you spineless weasel!” As introductions go, I’ve had better.

You can’t be seen in a car like this if you’re a shrinking violet with a penchant for anonymity. The Camaro, since its rebirth in 2009 as the fifth-generation, has redefined the muscle car genre, winning innumerable plaudits for its design and value for money. At the World Car Awards in 2010, it was named ‘World Car Design of the Year’, an accolade that it thoroughly deserved for its near perfect combination of futurism and retrospection. Yet this, the ZL1, is shouting at me before I even open its door.

The sixth-gen Camaro has been in production for two years now, available with either V6 or V8 mills up front, but the ZL1 is a newcomer, being launched earlier this year. Its technical spec makes for a fascinating read and goes some way to explaining some of the more hysterical aspects of its styling. Those front wings, for instance, are wider to make room for larger tyres, necessary for clinging to the asphalt when cornering at speed (of which there is no shortage). Its V8 displaces 6.2-litres and, as is par for the course, it’s supercharged. This means it needs greater cooling capacity, requiring a new, lower grill aperture and that carbonfibre protrusion from its bonnet assists with getting all the heat generated by that engine out of there.

Its automatic transmission was developed in a rare collaboration between GM and Ford, and it’s the same as found in the top flight Raptor – a 10-speed unit that you’d be forgiven for thinking shouldn’t be within a million miles of a serious performance car. Nicely rounding things off is the ZL1’s magnetic damping, which should help this behemoth keep on the straight and narrow during more enthusiastic throttle play. I gulp, thumb the key fob and open the door to climb in. 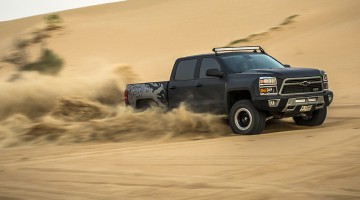