The Reaper, the delinquent cousin of the Silverado 1500 Series, is Chevrolet’s answer to the Ford F-150 Raptor, and as well as looking formidable, it has been designed to chomp away at the desert floor at speeds that border on the insane. Built in conjunction with Southern Comfort Automotive and Lingenfelter Performance, the Chevy Reaper starts out life as a standard Silverado 1500 series pickup and is then revamped into a high horsepower desert-chomping weapon aimed at the high-speed off-road enthusiast. Aesthetically the arches are flared wider and there is more aggressive front-end styling, with mounted LED light bars from Rigid Industries that feel like having a portable sun. It’s a look finished with big meaty bead lock wheels and General Grabber tyres, and an evil matte black paint finish. Its appearance over a standard Silverado has caused controversy amongst die-hard Chevy fans. Personally, I’d say it’s an odd change but you cant beat that broad square facia that has always looked tough as well as known by all, Chevy fan or not.

Deposited in the cabin, I sit a few feet behind a colossal 6.2-litre big block firing away, cranking so violently away at five thousand rounds a minute. Thanks to that beautiful lump of Magnuson supercharged goodness sitting on top of the 6.2-litre sledgehammer that makes 550bhp and 580lb ft of torque mated to a six-speed automatic transmission. Said power is a welcome improvement to the 355bhp and 383lb ft of torque put down by the standard motor. The Reaper will happily propel itself from a standstill (provided you can get it to behave) to 100kph in six seconds and can be likened to being shoved forwards from the comfort of your own sofa.

And to find out how the more ferocious Reaper handles, we took to the dunes to set all 550 horses loose. And first impressions are positive. 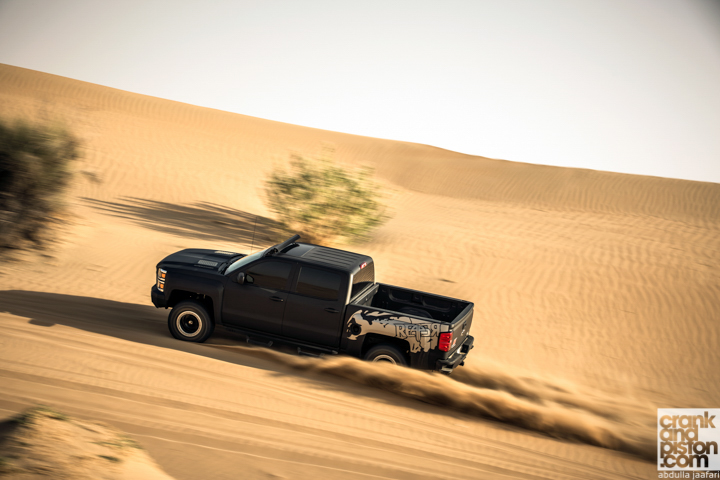 The Reaper handles tracks with ease. There is a great deal of steering input required to muscle the big Chevrolet around a corner, but the Fox suspension is a significant improvement over stock as it offers greatly reduced body roll without jarring the occupants. Up hill, those massive General Grabbers tyres claw at the sand, and – with a lot of right foot – quickly deal with climbs. I found to my immense pleasure that the Reaper can, and will roast its rear tyres through first and second gear when the traction control is turned off. From the moment you step on the throttle, there’s brute force from 2000rpm through to 5000rpm thanks to the supercharger covering the flat spots in the truck’s power band.

I sit listening for a tell-tale sign that I’m approaching the limits of what the robust Fox Shocks and bash-plate are capable of; and soon find out that this truck has bitten off more than it can chew. It feels like the limits of the truck can be found much too quickly. Granted the mechanical changes over stock can be felt throughout, but arguably, just aren’t felt enough. The front suspension for instance is set up to be softer than the rear, which is fine for road comfort on a day-to-day basis, but not so much on rougher terrains, and is rather like being on a see-saw at speed Fortunately small bumps are easy to deal with, the suspension making short work of it all. Bizarrely the brakes have remained unchanged from the standard unit, and though they still offer good feel through the pedal and gets the behemoth stopped in less time than it takes to catch a breath, compared with the rest of the upgrades, it feels a bit of a shortcut. 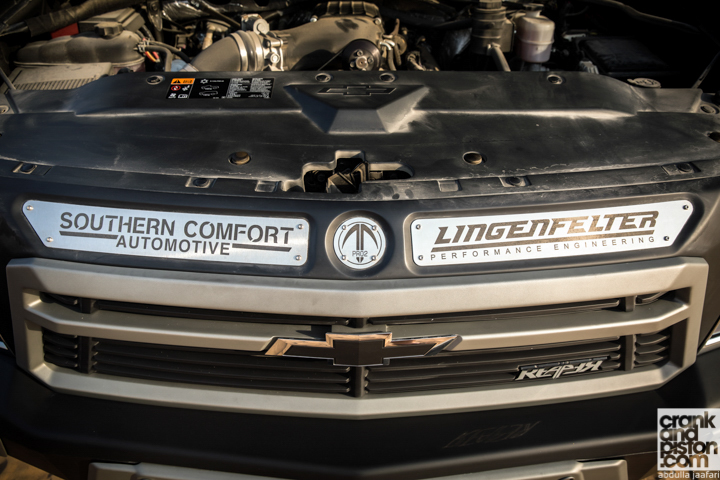 Away from the dunes and on the road, the Reaper is a surprisingly comfortable drive with good visibility all round, and the typically springy armchair seats found on most pickup trucks. The leather-lined interior is a comfortable place to be with minimal changes from stock that come in the form of a special Reaper emblem stitched into the head rests as well as a gauge cluster unique to the Reaper. The Corsa exhaust note rumbles away with the intention of causing an earthquake, and yet within the cabin, there remains a sense of refinement and control. Well, to an extent anyway: when cruising below 100kph tyre roar from the General Grabbers is pretty intrusive, something I could only ignore when I went near the loud pedal and the air-conditioning cranked on high. 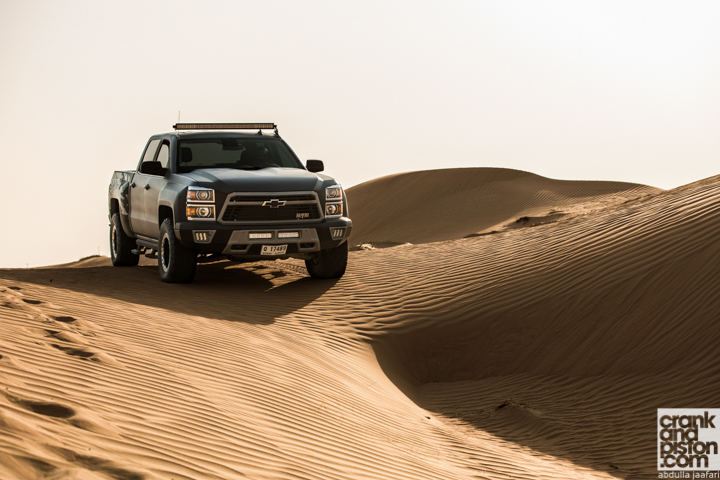 Overall then the Reaper is a massive improvement over stock, both inside the cabin and out. And yet I do still feel like something is missing, it should be tougher, stiffer, and more robustly put together. It feels like I’m working the Reaper too hard when running it off-road. Chevrolet could have done more in the sense of offering a dedicated off-roader instead of an after thought kit that was thrown together. A combination of shocks, skid plates, engine upgrades, a front clip and fender flares aren’t going to be enough to satisfy what the off-road crowd really want; a factory finished, turnkey pre-runner.

That being said, it’s a formidable show of strength from General Motors’ aftermarket division. Now if only they could follow this up with a purpose-built answer to the Raptor, we’d be looking at something seriously impressive.

Previous ArticleAudi TT. What is that noise? The Management Fleet
Next Article Yamaha set to unveil new sports car at Tokyo motor show