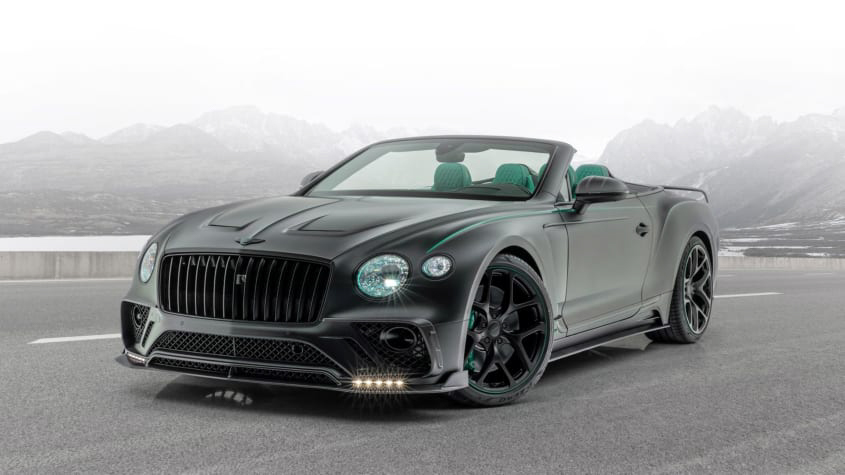 One of the profound disappointments over the cancellation of this year’s Geneva motor show is not getting to enjoy the sights and sounds of the exhibition’s less conventional inhabitants: the high-end tuning firms.

Chief among these is almost always Mansory, whose reputation for shock and awe is virtually unsurpassed. And while Geneva would have treated us to an entire show stand, complete with maybe five or six modified luxury cars, we can at least take a closer look at the brand’s most recent project: a Bentley Continental GT V8 Cabriolet.

True to form, Mansory has taken one of the more desirable vehicles on the roads and made it… well, different, certainly. Like all its projects the car is a complete vehicle conversion, rather than a cherry-picked assortment of parts, and to Mansory’s credit, its craftsmanship always seems to be of a high level despite the often complex shapes.

Central to this particular conversion is a coat of matt black paintwork (what else?), offset both by a multitude of carbonfibre components – the bonnet, plus elements on the bumpers, side skirts and rear diffuser are all fashioned from Mansory’s favourite substance, produced in-house – and by “chrome oxite green” detailing along the bodywork’s character lines.

Further chrome oxite green highlights can be found around the rim of the 10x22in and 12x22in front and rear alloy wheels, as well as on the calipers for the brakes, the front and rear Mansory logos, and on the structural elements under the bonnet.

While we’re under here, Mansory has breathed upon the twin-turbo V8, extending its output to 631bhp from 542bhp (and eclipsing the W12’s 626bhp), with 656lb ft of torque, up from 568lb ft and only just shy of the W12’s 664lb ft. Mansory claims a 0-100kph time of 3.8sec. A high-flow exhaust system completes the mechanical transformations.

If you thought by now you’d escaped the flashes of chrome oxite green, then you let your guard down too soon. The entire cabin is drizzled in it, head to toe, on virtually every surface you’d expect to find leather. Again, the finish looks (as far as we can see from the images, rather than inspecting in person) nicely done, even if the reprofiled steering wheel now looks a bit wonky. Carbonfibre once again makes an appearance, this time in a unique, leaf-like weave on the dashboard panels.

While not perhaps the first choice of many c&p readers, we can at least appreciate that we live in a world where people are free to express their imagination like this. And maybe, if the Geneva show returns next year post-epidemic, we’ll get to see something even wilder from the minds of those at Mansory…