Cadillac ATS vs Lexus IS350 F-Sport. Fighting back

crankandpiston.com pits America against Japan to find out who can knock the Europeans from the top of the mid-size saloon plinth.

So you’re after a new premium mid-size saloon. You want a bit of poke, a good amount of style without being too flashy, and it has to be comfortable as well as feature a performance element. Basically, you want everything. Where do you go? Traditionally, you’d head straight to Germany and check out a BMW 3 Series, an Audi A4 or a Mercedes-Benz C-Class. The big Teutonic three have long been the go-to cars if you want all your saloon boxes ticked. But things are changing. Here are a couple of cars at the face of the revolution. For too long, Europe has had things its own way, but now America and Japan are fighting back.

First up, from the land of the rising sun, the Lexus IS350 F Sport. Lexus has been upping its game relentlessly over recent years, and the introduction of the LFA supercar in 2009 gave new impetus to a more dynamic focus. This F Sport variant adds flashier visuals, stiffer suspension and other sporty frills to the standard IS350. It keeps the 3.5-litre V6 engine, which produces 306bhp for the rear wheels to enjoy.

From the US of A, the Cadillac ATS. This is a car I’m already very familiar with, having driven one from Germany to Abu Dhabi. It marked a massive improvement in quality for Cadillac, dispelling almost all of the traditional snarks about US cars regarding quality and innovation, and led the charge of new products from Caddy that most recently includes the new CTS. Under the ATS’ bonnet is a 3.6-litre V6, producing 321bhp, also to the rear wheels. 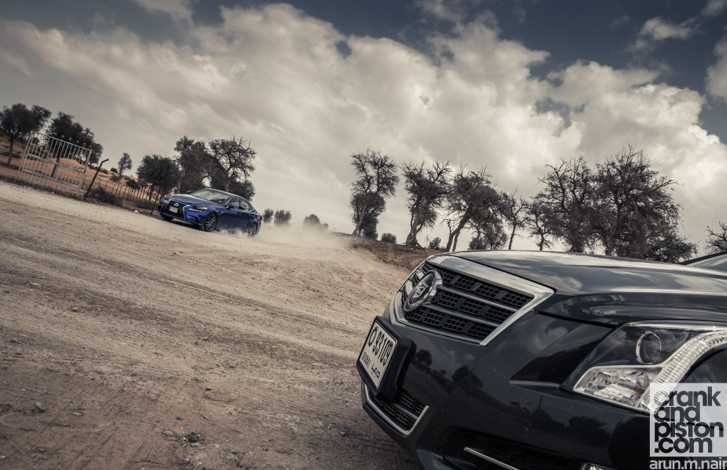 So, can either of these interlopers challenge the established German status quo? On looks, you’d have to give them a decent chance. The Lexus in particular is a great-looking machine, more visually daring than either the Cadillac or the old guard European models. The ‘spindle’ grille, combined with the new split headlights might not be to everyone’s taste, but they are to mine, especially when set against the beautiful blue paintwork of our test car. It’s pretty at the back too, the sweeping line up through the lights having grown on me since it was first revealed. Even in profile, it manages to look dynamic and stylish without veering into the increasingly popular four-door coupe territory.

The Cadillac has less immediate presence, but it’s still not a bad sight to behold. The front lights are eye-catching, especially the daytime LED running lights that drop down into the bumper, and the angular lines all over make it distinctive. I’m not too keen on the rear-three quarters though, it has a large featureless flank at the back that’s none too flattering on its profile. 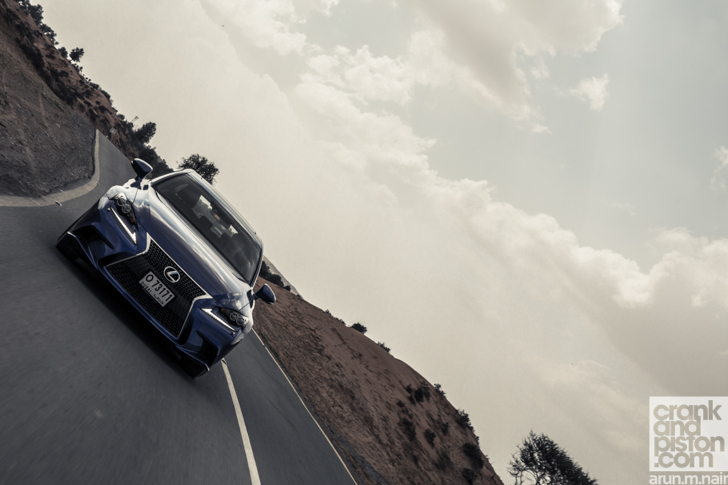 I jump into the Lexus, and settle into its somewhat avant-garde interior. The design is refreshingly different, all sorts of interesting features jutting out. Particular praise must go to the innovative joystick interface for the infotainment system, which works really well and saves searching for buttons or reaching across to flail at the touch screen. It’s a shame that some of the materials, particularly on the centre console, feel rather plasticky compared to the latest offerings from rivals, which gives a slightly dated feel to the Lexus; curious as it’s a relatively new machine. Hopefully a mid-life refresh will see it smartened up.

The first part of our journey is all highway, as we head out to find some more exciting roads. And for this, the Lexus is exceedingly pleasant. The sports seats that come with the F Sport package are right up there with the most comfortable around. They hug the body without squeezing it, and they’re padded enough to feel like a warm bed when you first wake up in the morning – you just don’t want to leave. On the move, even with the stiffer-than-standard suspension, lumps and bumps in the road surface are spirited away into the ether, leaving you to enjoy a quiet and refined cruise with barely any intrusion from the outside world into the cabin. Lexus might be trying to move into a sportier image, but it’s had smooth premium quality mastered for a while now, and it’s still very much in evidence. At least, apart from that plasticky centre console.

After an hour or so I take the chance to hop into the ATS. I never thought I’d say this, stepping from a Japanese car into an American one, but the Cadillac’s interior is a step up, not just on previous offerings from the company, but compared to the Lexus. The design is contemporary, the tech right up there with the latest offerings, and the quality a vast improvement on what’s come before from all General Motors brands. Features worthy of a mention – adaptive cruise control (which I know will nark deputy editor James), a head-up display, and an awesome hidden compartment under the centre console that rises up like magic when you brush a finger beneath it. Very cool. 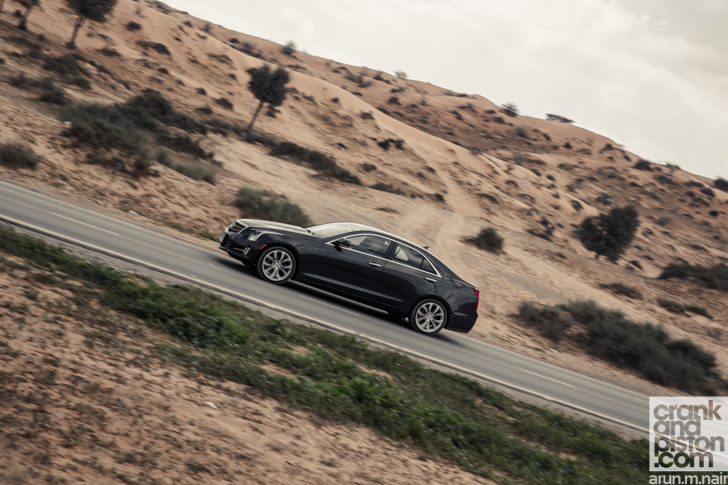 The ATS’ engine starts with a push of a button to the right of the wheel, and as soon as I move away from the kerb immediately it feels a more solid, stiff proposition to the Lexus. The chassis feels prepared for an assault on challenging roads, more composed and honed than the slightly soggy Lexus. The steering is more feelsome too, with more data coming to the fingertips. It’s not quite as refined on the motorway however – there’s considerably more wind noise blustering around the wing mirrors and through the windows, and while the seats are comfy they’re not as hugging as the sports numbers in the IS.

None of that really matters once we hit more interesting roads though; tight, twisting, rising and falling through sand dunes. The Cadillac feels so much sharper here than the Lexus – it’s lighter than its Japanese rival, stiffer and with more power and more response. This isn’t just about numbers – there’s an eagerness to the way the Caddy delivers its power, a will to push on and give feedback. That said, the engine isn’t the smoothest you’ll find. The naturally aspirated V6 has more power than just about anything else in the segment, but compared to the silky-smooth power delivered from Audi and BMW it’s a touch agricultural. Still, you can’t argue with 5.6 seconds to 100kph, 0.2 seconds faster than the Lexus.