Lexus is getting into the GT3 game with with the RC F GT3 Concept and has announced intent to support GT3 sports car racing in 2015. Built by Techno Craft – TRD Japan – and jointly developed with Lexus International, the RC F GT3 is based on the new RC F Coupé which is the most powerful V8 performance car developed by Lexus. In GT3 guise, the RC F will develop 532bhp and weigh just 1250kg. That’s a healthy 425.6bhp/ton (if I have calculated correctly).

The launch of the RC F GT3 concept marks the start of a long-term commitment to GT3 racing by Lexus. Testing will begin this year, with a view to supporting sports car racing teams participating in 2015 GT3 racing categories.

Previous ArticleLotus Elise 111S. All about the twisties. Journals
Next Article Cadillac ATS vs Lexus IS350 F-Sport. Fighting back 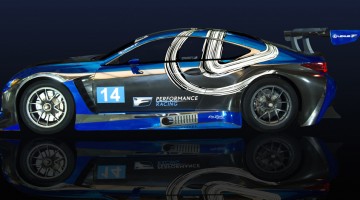