Bentley offers a very unusual holiday – take its entire range of cars around a frozen lake in Finland. Sideways. In Power On Ice. Consider us interested. 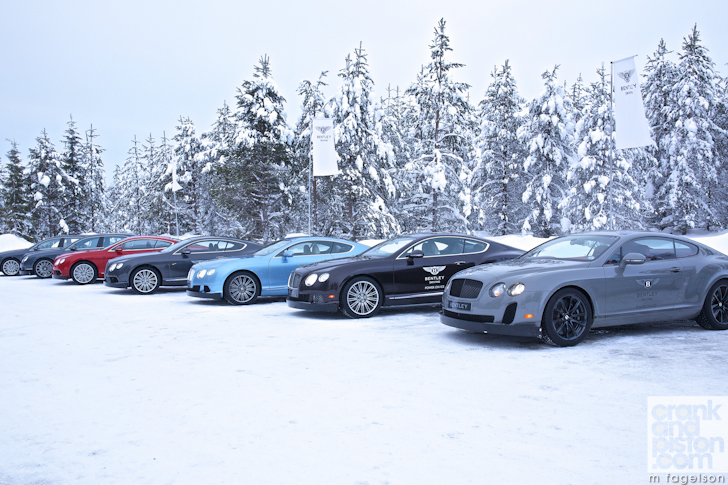 The exhaust of the Bentley Continental Supersports crackles as I lift off the gas. The substantial weight of the car lurches forward and I use the extra grip from the front tyres to flick the nose towards the corner. The tyres dig in to the surface and the car shifts left hard. I wait, ready for the back end to swing round and break traction, and then I wind in a big application of opposite lock before getting back on the gas. More than 621bhp gallops to all four wheels and for a glorious few seconds I’m sliding sideways, looking forward out of the passenger side window and feeling like a driving god. 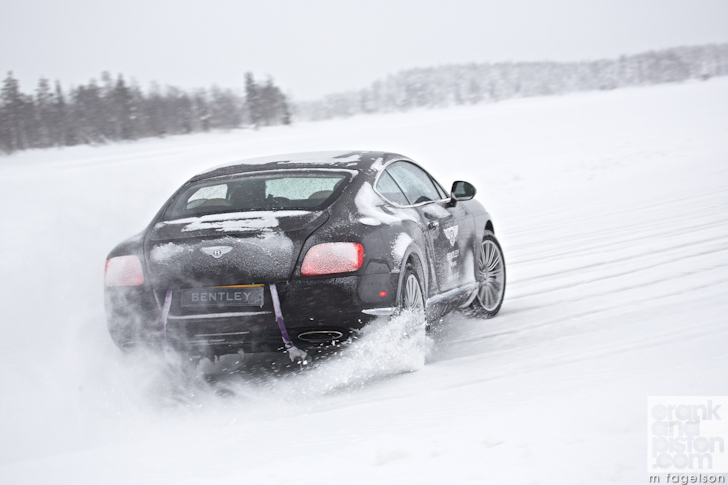 But then the weight shifts. Pendulum-like, the drift corrects itself and starts to slide the other way. I’m not ready for it. My hands windmill around the steering wheel, but it’s too late. This hugely expensive, handcrafted British sports car is careering sideways off the track, and all I can see through the side windows is a forest of stout pine trees. Oh no.

Flumph. The car beds itself into a pile of snow. I put my foot down to see if I can pull myself out, but it’s no use – I’m stuck. As I smack the steering wheel in frustration, the instructor next to me gets on his walkie-talkie. “Traktori, traktori, dynamic area one,” he says.

Thankfully, there’s no damage at all, save to my pride and dignity. See, the trees I was careering towards are the best part of a kilometre away, and the foot or so of snow is the only thing there is to hit on this particular race track. I’m in Finland, on a frozen lake, flinging an entire range of Bentleys around on ice with carefree abandon, and for once I’m not terrified that I’m about to bend something. 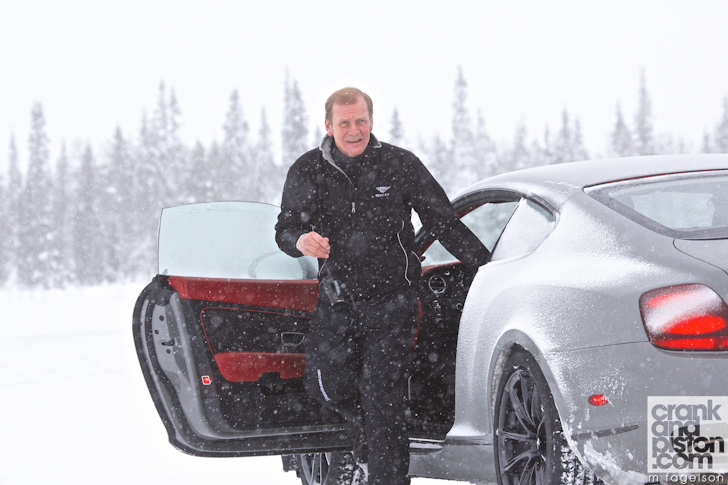 It’s all part of the Bentley Driving Experience, otherwise known as Power on Ice, and I’ve been invited along to get a taster of what is, in effect, a very nice weekend holiday for the affluent petrolhead. A two-hour flight from Helsinki, just shy of the Arctic Circle, is an area of countryside close to Kuusamo, where the annual cold weather has left a vast lake covered in ice almost a metre thick. Here, we find four-time World Rally Champion Juha Kankkunen, who runs the facility used by Bentley for this exclusive vacation. Targeted predominantly at Bentley customers – but available to anyone – it’s pitched as a two- or four-day luxury break, where visitors can learn to handle the Bentley range at extreme angles that would be extremely tricky to replicate in warmer conditions. Kankkunen has brought together a team of experienced race and rally staff that spend the racing off-season training up the lucky attendees.

I’m here with a group of journalists, and we’re getting a one-day preview of what to expect. The price – starting at around $13,000 – includes a flight from Helsinki to Kuusamo, and transfer to the luxurious Ruka Peak hotel. It’s a sign of just how high-calibre the staff are that I’m collected from the airport in a Volkswagen Touareg by former British karting champion Tiffany Chittenden – and she’s not even coaching. 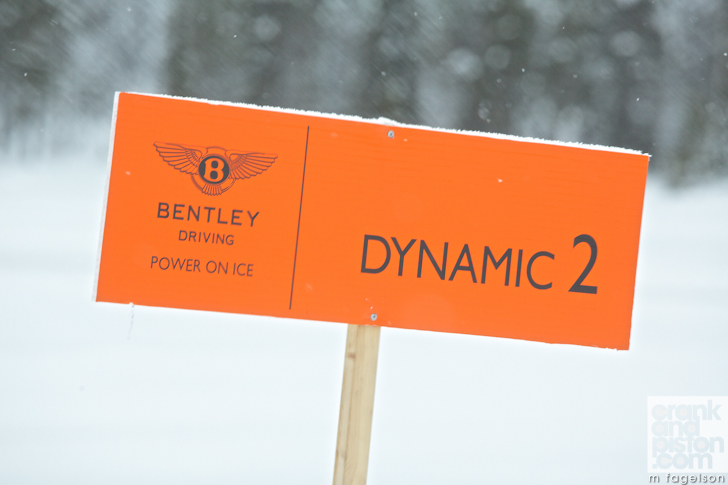 After a fine night’s sleep in a winter chalet larger than my Dubai apartment, Tiff picks me up bright and early and we drive for 15 minutes along treacherous icy roads to the site of the day’s activities. It’s approaching -10 degrees outside, and all the cars – both for transport and amusement – are fitted with studded tyres. Even winter tyres, of the type mandated when it gets chilly in more central Europe, would be useless in these conditions.

We gather in a small hut, located at the edge of the lake. A welcome fire burns in the centre, and the benches are lined with reindeer fur. Despite this, and the fact that I’m wearing pretty much all of my clothes, I’m still extremely cold. However, a fire in my heart warms me up a bit when our instructors for the day are introduced. They are a fine bunch of talent – as well as the trainers employed by Juha, and the great man himself, Bentley has brought in former Indy Lights driver Jamie Morrow, multiple British rally champion Mark Higgins and Intercontinental Rally Champion Kris Meeke. If these guys can’t teach me how to get a 2.5-ton luxury car sideways, then no one can. 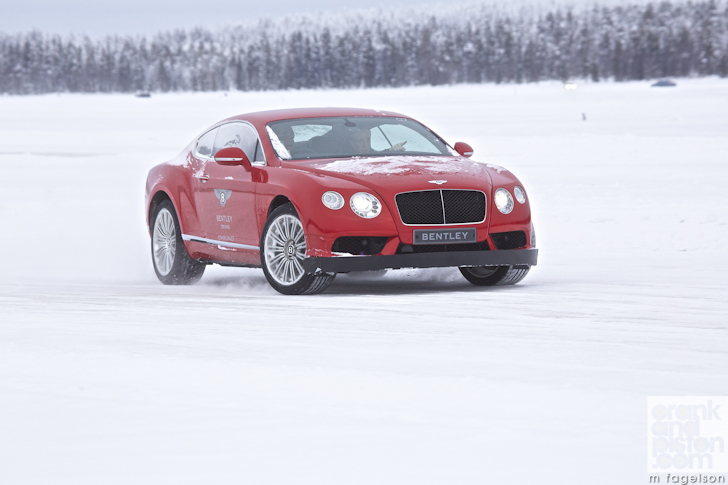 I start off in the Continental GT V8. Clad in bright red, it’s completely stock save for some Pirelli winter tyres with added studs, and a small extra bumper on the front – just in case. We roll slowly down the hill and onto the lake, which is a surreal experience. I know there are millions of gallons of icy water below me, but it feels like driving on to a big field. Snow covers everything, save for a selection of track layouts, personally designed by Juha on his skidoo and then cleared down to the ice by the tractor. The fact that a tractor can drive over a frozen lake allays the mild fear I had of plunging through the ice. I know Bentleys are well made, but I don’t imagine they’re completely watertight when submerged. 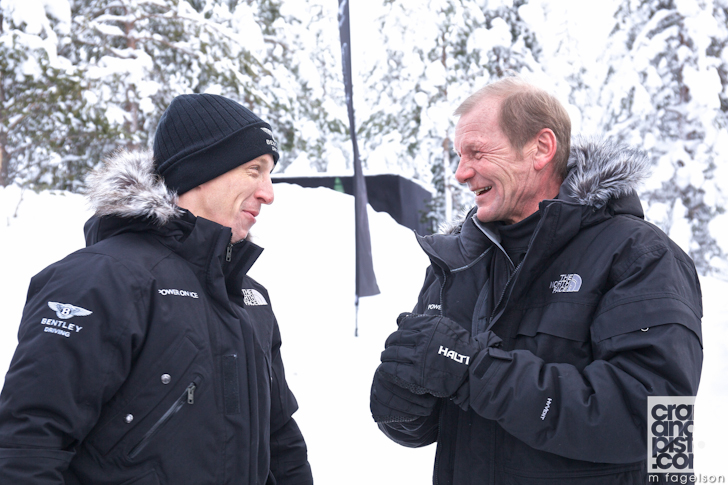 There’s a pause as I wait for my first instructor – Kris Meeke. Well known as the IRC champion and also as a MINI driver in the World Rally Championship, he was left high and dry when MINI unexpectedly dropped him due to budget issues before the 2012 season. But that doesn’t mean he’s not still one of the best rally drivers out there, and well versed to taking things sideways. I listen intently.

“The cars are quite heavy,” he explains in his Northern Irish brogue, “but when you come off the throttle they tend to go into a real nice slide. So you need to get off the throttle and induce the slide using the steering wheel. Try to pick up the slide mid-corner on the throttle.”