The test vehicle on this side is Volvo Trucks’ flagship FH, which boasts a variety of engines for earth-shifting torque and power. I figure for my first run at a Grand Prix Circuit in a movable office block, I’ll go easy and jump into an FH 6X4 Tractor which has a 13-litre diesel engine and produces ‘just’ 480hp and 1770lb ft of torque. Another inductor handshake (Piotr this time), another pre-flight check, and I’m ready for my first lap of the Yas Marina Circuit in a truck.

Now, I’ve had the privilege of driving many great vehicles around Yas, doing my best to nail the apexes with each. Turns out in a truck, the principal is the same but in an entirely different way. Heading off pitroad, we’re already up to 50kph when I realise I have no idea where I’m supposed to brake. And I’m hitched up to a tanker being pulled comfortably by a rear axle that can handle 26 tonnes. As you might understand, I prefer to play it safe, and break a good 200m before the corner. Turns out this was a little ambitious and the FH leans rather alarmingly as I try to take the first chicane at 30kph. A nervous looking Piotr suggests I ‘slow it down a little’. These words of wisdom and a rapidly elevated heartbeat are still ringing in my ears as we traverse the first chicane, the speed down and my eyes on the mirrors to make sure I don’t flatten any marker cones. Or photographers. Or marshal posts.

Onto the sweeping back straight on the South Circuit, the speedometer is creeping up to 50kph then nosing 60kph before it’s time to start braking for the tight right-hander past the Viceroy Hotel. To avoid jack-knifing, I have to brake in a straight line. But to make the corner itself, I have to swing the 460hp FH cab way out wide to fit the trailer through. On one of the fastest sections of the track, I’m spending more time looking in my mirrors than I am looking ahead, which can’t be putting the truck in front – whom we’ve started to catch at a brisk pace – at ease. 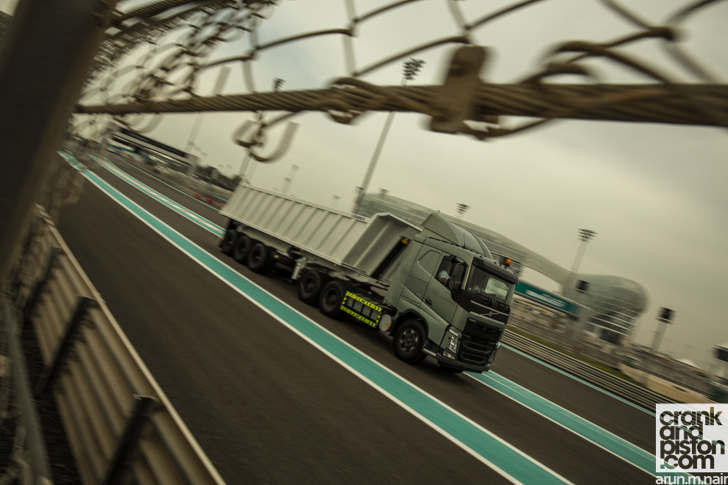 Once again though, the feeling is remarkable. The last time I drove a vehicle this high up was also at 30kph, but that was a 1500hp monster truck, designed to propel highly trained athletes into the air. But while the adrenaline rush was almost beyond words in the monster truck, in the Volvo the mood is… relaxed. There are no crosswords from Piotr, there are no real butterflies to speak of, and after we’ve completed a few laps, we’ve struck up quite a good conversation. I’ve almost forgotten that I’m at the wheel of a 25-ft long, near 20-tonne articulated lorry driving at 50kph.

And therein lies the point. The prospect of driving one of these behemoths is intimidating. In practice though, it’s remarkably refined. There’s a comfortable seating position, plenty of visibility through the enormous windscreen and plenty of driver assistance systems. There’s even air conditioning. Whilst the likelihood of my becoming a trucker in the future is slim, the reality is that Volvo really has created an environment that professionals can enjoy and use to the best of their abilities, and in comfort. The new FMX, FH and FM range is a big, big ace up Volvo Trucks’ sleeves as it strives to further establish itself around the globe.

It doesn’t stop me again catching my jeans on the ladder on the way out though.

Previous ArticleJaguar XJ220. Is that how you drive it?
Next Article Emirates Desert Championship. Rd 3, Heat is back on