I’m given the opportunity to pilot a 20-tonne Volvo Truck around the Yas Marina Circuit for a few flying laps. And it’s not as scary as you’d think…

Last week, the crankandpiston team was arguing over who would drive the Mercedes-Benz SLS AMG Black Series and Porsche 911 GT3 in our much-hyped head-to-head. I, however, was not one of them since I had my own banner day to look forward to: the regional launch of the new Volvo FMX, FH and FM truck range. On the surface that may seem like I’ve pulled an ironically short straw, but you’d be wrong. This event – the largest truck launch ever in the Middle East – will mark the first time I’ve ever driven a truck of this size. And for added excitement, I shall be doing so right here on the Yas Marina Grand Prix Circuit in Abu Dhabi.

Renowned for its automotive production since 1927, the Group has been producing trucks for almost as long, the first Volvo Truck rolling off the production line just one year later in 1928. Just over 85 years later, business is looking good. Volvo Trucks encompass 190 markets worldwide courtesy of production sites in 18 different countries (Saudi Arabia being the second largest) and which combined employ almost 115,000 people. Since 1998, turnover has risen from $27 billion to $45 billion in 2012. In the Middle East in particular, with Expo 2020 and the Qatar World Cup now imminent, demand for heavy-duty construction vehicles is soaring, so much so that the company looks to increase sales in the region by 25 percent by 2015. It’s no real wonder then that Volvo Group is so excited about its latest additions: more than $3 billion investment has been sunk into the new range alone, which has conducted nearly 14 million kilometres of testing.

It’s difficult though for me to take all these figures in, as I’m soon being shown an informative – and slightly terrifying – safety briefing that demonstrates Volvo Trucks’ new emergency braking system. And which also shows a driver – who’s not wearing his seatbelt – being knocked out a truck window. I’m hoping a practical demonstration won’t be required in my first test of the day aboard the hard-as-nails Volvo FMX. 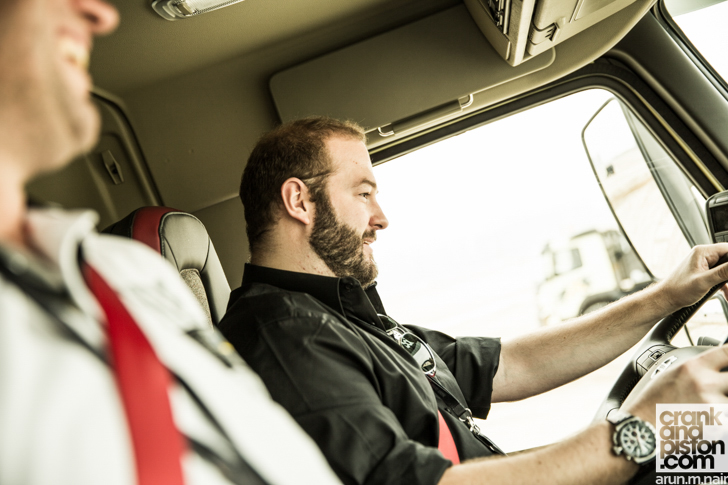 It’s a formidable brute the FMX, all chiselled grille, no nonsense Volvo identity panel, and more robust bull bars. Designed with toughness by the Norris-full in mind, part of the comprehensive pre-launch testing included hanging the 15-tonne FMX  – now into its second generation – by its own toe hook 20 metres above Gothenberg Harbour. With Volvo Truck president Claes Nilsson standing on top of it. I don’t think we need to worry too much about build quality.

What I do need to worry about is getting the FMX going. Yes, heaving up three steps into the cabin is child’s play. But surprisingly, adjusting the seat is far more confusing:

“… right, not that button…not that one either… no idea what that one does… I daren’t touch that one… oh God what the hell did that one just do?… ah! Got it!”

My rather cretinous intro to the FMX 6×6 Rigid is not lost on instructor Lars sitting in the passenger seat, who’s smiling broadly. To help out – or perhaps to show mercy – Lars points out the tilt pedal so that I can adjust the steering wheel to my liking. Whilst this is found on the steering column in most cars, in a Volvo truck the lever is down by my left foot, where you might find the parking brake in a saloon. I’m clearly well versed with this pedal, the force with which I push the pedal shooting the steering wheel forward out of my hands without hesitation, and for a second I’m afraid of losing the FMX windscreen altogether. A rather embarrassed couple of minutes later, my seat is adjusted, the enormous steering wheel is set in place – albeit horizontally – and it’s time to explore the rest of the Day Cab. 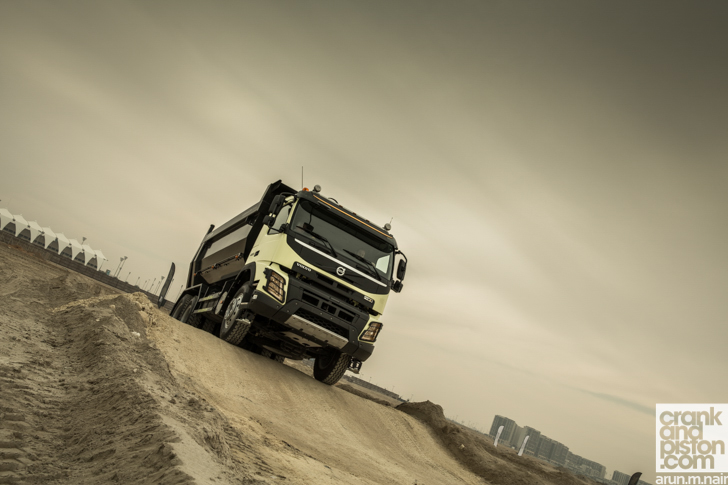 Lars draws my attention to the centre console, which is awash with buttons and switches and various other accoutrement that go straight over my head. Fortunately my only concern is the handbrake button on the console by my right hand: pull to lock, push to release. Straightforward enough, but given that I’m about to pilot a 460hp, 1696lb ft of torque 15-tonne demolition ball, I go through the procedure two or three times ‘just to make sure’. Lars, still smiling, then motions to the gearlever to the right of the driver’s seat. In the context of the enormous cabin it’s almost hilariously small, as are the manual controls on the side of the lever (a version of which you also find on the Ford F-150 Raptor). Pulling from N to A and the truck is in automatic. All I have to do is press the accelerator and not go above 30kph. Yeah. You don’t have to worry about that Lars.

We’re away smoothly, the 12-speed I-shift gearbox jumping from third gear to seventh as we get up to speed (by that I mean 20kph). I’m unused to having so many gears at my disposal, and notice that the rev counter only goes up to 2500rpm, compared with 7/8000rpm in a car. Since the new Volvo Truck range has been designed to make long distance journeys as comfortable as possible, smooth transmissions have been carefully developed. That, Lars explains, is down to the new I-shift transmission and the Economy/Performance options: in Economy, several gears can be skipped to keep the ride smooth, maintain momentum, and reduce fuel economy by up to 7 percent.

To demonstrate, as we approach the first of several surprisingly steep inclines on this off-road ‘handling’ course, Lars tells me to press the ‘E/P’ button next to the gearlever to activate Performance. As we start to ascend, I can feel each gear being slotted, and the effect is remarkable. Almost every two seconds the truck drops a gear on an incline that a car could easily do in third or fourth. It’s a timely reminder of the weight we’re carrying. 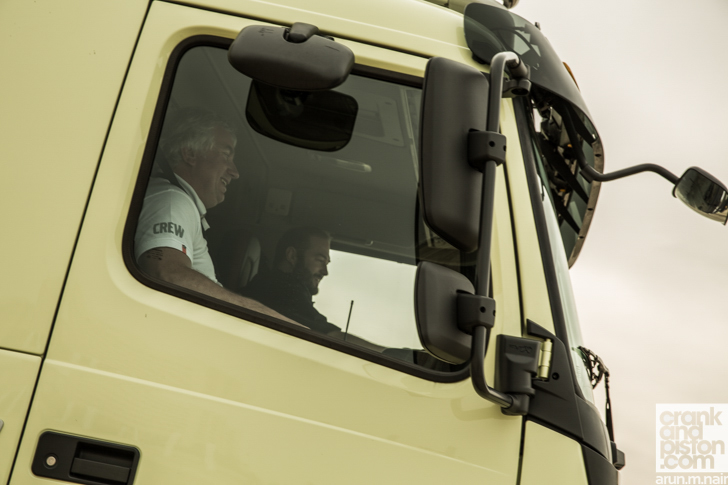 What further staggers – as Arun comments upon when he sees my wide-eyed expression – are the brakes. They’re seemingly made of wood, or so it feels through the pedal. I’m loathe to push too hard for fear of jack-knifing or even tipping over. This proves a mistake, and I’m soon pressing much firmer as the speedometer needle hits 35kph and the corner which had seemed kilometres away just a few seconds ago is now upon me. Cue wide-eyed expression again.

Volvo Dynamic Steering is my saving grace here: it’s unbelievably light. With ballast in the trailer, we’re pulling between 35 and 40 tonnes through bumps, dips and over inclines, and the FMX feels no more difficult to drive than a large SUV. The prospect is ridiculous clearly, since I’ve barely scratched the surface of what is required to be a mothertrucker, but it’s surprising nonetheless. Indeed, when Lars activates the cruise control, which takes us over the final hurdles at 1000rpm (sometimes dipping the cabin forward alarmingly), it brings to mind just how straightforward the process really is. Volvo Trucks has clearly done its homework. That’s the FMX ‘conquered’ and my ego given a boost, and having dismounted with all the dignity you’d expect (I somehow manage to catch the end of my jeans on the ladder), I’m soon being redirected to the Yas Marina Circuit itself where I will do a few flying laps.

Previous ArticleJaguar XJ220. Is that how you drive it?
Next Article Emirates Desert Championship. Rd 3, Heat is back on