Prioritising practicality over performance for once, crankandpiston.com has gone and got itself a long term Volkswagen Touareg for The Management Fleet

It’s been some time since this particular writer drove the second generation Volkswagen Touareg. An experience that, quite frankly, was quite nerve-wracking. Following a brief sojourn across Germany that proved more comfortable than electrifying, crankandpiston.com was then invited to try out the Touareg’s off-road capabilities. Yep, a Touareg, the soccer mom’s vehicle of choice. Off-road capabilities? Oh how we scoffed…

That was until we saw the first of our obstacles, namely an 80 – yep, EIGHTY – degree descent down a 20ft slope into the valley beneath, surrounded as we were by high viz jackets and photographers standing rather too obviously behind tape that clearly outlined ‘the safe zone’. If the prospect of balancing on three wheels whilst gravity and a loose, shaled surface collaborate against you, the Touareg was also sent across a pendulous obstacle course of raised platforms that lifted each wheel, one by one, completely off the ground. While it stirred some choice conversation over dinner, the exercise also demonstrated both the torsional rigidity of a chassis also found in the Porsche Cayenne, and suspension clearly derived from Chuck Norris’ personal mancave. And this is not the only demonstration of the Touareg’s off-road potential we’ve seen in recent years.

As well as winning three Dakar Rallies on the bounce from ’09 to ’11 (and finishing second on its debut in 2006), the Touareg also spent 11 days and 17 hours on the Panamerican run from Tierra del Fuego in 2011, and 17 days and 18 hours driving ‘Russtralia’ one year later. Both of which were world record times, incidentally.

You can probably imagine our interest when Volkswagen’s most prominent SUV made its way to The Management Fleet this month. 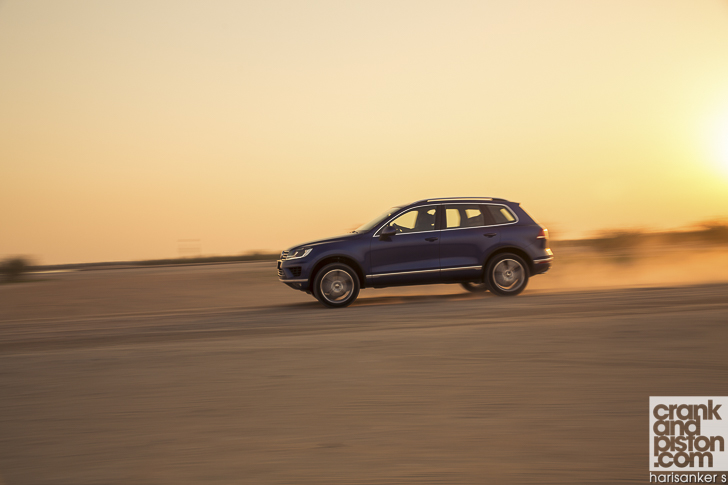 Rather than a 360bhp 4.2-litre V8, our test model houses a 280bhp 3.6-litre V6, though both send their respective power to all four wheels via an eight-speed automatic gearbox, the 4Motion Terrain Tech configuration allowing for both high and low range. Inside, refinement is also the order of the day for VW’s premium SUV, including chrome detailing, ‘Nappa leather’ seats and an updated infotainment system.

Outside the Touareg is much as it’s always been, save some blink-and-you’ll-miss-them revisions on the front and rear bumpers, larger headlights, and…actually, that’s about it. Reef Blue paint and 20in ‘Masafi’ alloys look pretty sharp though, don’t they?

And while it’s tempting to find a ‘nill by road’ route to work everyday across the next four months, we’re curious to see how the former Dakar Rally winner will fare on the road, and given that the Touareg effectively replaces the Golf on our long term fleet, the SUV has some big shoes to fill.