Abdulla’s attempts at DIY are a reminder that, if it ain’t broke, don’t fix it

For some time now I’ve been going through online forums for owners of E46 BMWs and have been reading about their experiences, mostly about cars with high mileages with details about which parts can deteriorate with time, most of which appear to be made from rubber. Not that I’ve personally experienced any issues but the excessive reading and researching resulted in me browsing through online shops, looking at parts I thought I needed. Next thing I knew, I was looking at the amount deducted from my credit card after an unplanned purchase.

What I ended up ordering was a rebuild rubber kit for the vanos system on my M54 engine, which has been recreated in different materials that can withstand higher temperatures. Replacing the old rubber o-rings has proven good results for other owners, like increased fuel efficiency and even a bit more restored torque on the lower ends. Additionally, I had thought of replacing all the fluids in the car, including engine oil, transmission oil, differential oil and even power steering fluid. My biggest concern, though, was to replace the transmission oil because, if done at high mileage, there’s a risk that you can cause the transmission to slip and fail. But danger is my middle name (ok, maybe idiocy rather than danger in this case).

I ended up with a box full of parts and started calling garages to see if they could do everything for me, but the price quotes I was getting left my jaw hanging several times and I began to wonder “what have I done?”. I really didn’t want to get stuck with a collection of unfitted parts – I just wished I could find a space with a lift to work on it on my own, that also offered me all the tools I needed. A few Google searches later and that’s exactly what I found. I sent a message to U-Fix-It Garage, located in Dubai’s DIP, just 15 minutes away from my house. I spoke with the owner Alf, just to make sure that the garage was what I thought it was, and I soon found myself loading all the parts in my boot and making my way to DIP on a Saturday morning, with the wishful thinking of finishing everything on time. 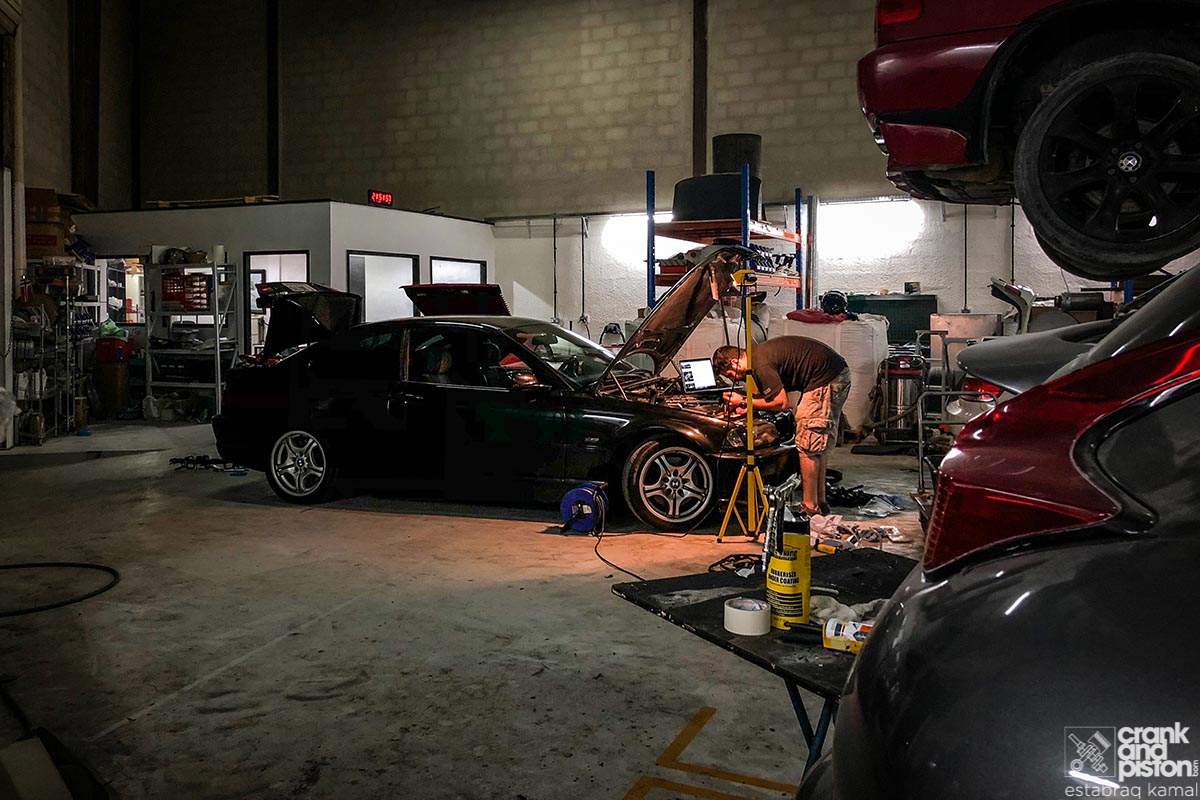 With available wifi, I had my laptop ready with the list of instructions and YouTube videos to help guide me through what I was doing, trying to avoid having to take a taxi back home. After an extensive 11 hours session, I was finally done and put everything back together. As the moment of truth came, I switched the car on and, well, let’s just say I’d never heard my car misfire like that before. After using U-Fix-It’s diagnosis equipment, I discovered it was misfiring on all six cylinders.

I was gutted. I thought I’d fixed it but ended up breaking it. I was able to drive it back home (at one in the morning) but I had to leave it parked up until the following Saturday, so I could figure out what went wrong. I went to the used parts shop and picked up a few things I believed I might have damaged and was determined to get the car back on its feet.

I took the valve cover apart, removed the vanos system, rebuilt everything from scratch and cleaned up the surroundings as much as I could, finishing the sealing work on a clean surface. It took me five hours this time, completing the whole job just to turn the key and have a fault-free engine, running smoother than I’ve ever known it and leaving me hugely relieved. Finally I’d fixed it and I can prepare to attend the Auto Cross race I’ve been getting ready for with the BMW Owners Club. Lets see how #ProjectBlack performs now.

You can check out more of Management Fleet updates HERE, and more BMW stories HERE