We take a tour of the Autostadt, temple to all things innovative and artistic. And Volkswagen. And Audi. Lamborghini. Porsche. Bugatti.

There’s an old adage that you’re probably familiar with: ‘I don’t know much about art, but I know what I like’. I’d probably expand on that by saying, ‘I don’t understand most of the terminology used in the Autostadt’s official brochure, but I know I want to have a good look round’.

If you happen to be in Wolfsburg in the next few weeks and are finished with the Volkswagen factory ahead of schedule (or even Mai-Käfer-Treffen come to that), then you might want to head across to the postmodern-looking building just across the road. This is the Autostadt, the VW Group’s ‘visionary communications platform’ to art, design, innovation, and a connection to the company’s fanbase. And cars obviously. Lots of cars.

Originally the museum was a storage site for fuel and coal, but VW pumping nearly €430 million and the collective imagination of 400 architects into developing the area has made quite a bit of difference. The site encompasses 28 hectares of land, and demonstrates to visitors – should they have petrol in their veins or otherwise – the enormity of the VW Group’s future in the automotive industry.

For €15-22 (I won’t go through the whole list, you can check that out HERE), the Autostadt offers a vast array of interactive exhibits, art nouveau and even driving experiences. We’re confident it’ll be the 15 minutes in the car tower though that you’re remember most.

Plus, as well as seeing Volkswagen’s design and engineering direction for both itself and sister companies Audi and Lamborghini (which by the way includes a formidable amount of green technology), the Autostadt gives visitors a peak at time gone by. Porsche fanatics for instance will find exhibits chronicling the 50-year history of the 911, as well as other choice examples like the 356. We’ve visited another museum you may interested in too…

You’ll also stumble across the Bugatti Veyron, the VW Group’s $5 million ‘told you we could do it’ scientific experiment; the VW minibus, though probably without the hemp; and, of course, The People’s Käfer. The Volkswagen Beetle.

The popularity of both the Bug and the Bus – their cult status is pretty rocky solid even today – was one of the key reasons why the company’s ‘Think Small’ advertising campaign was ditched after the 1960s, with a view to creating something grander. From ‘The People’s Car’ grew ‘The People’s Company’.

Given what’s on offer at the Autostadt, I’d say executives in Wolfsburg would consider their money well spent.

– Our thanks to Volkswagen and the Autostadt 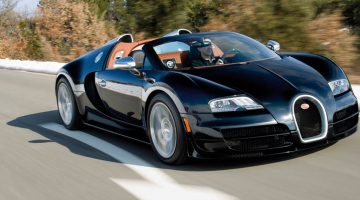 Bugatti Veyron: review, history and specs of an icon