Given the manufacturers we’ve already seen produce design concepts for Gran Turismo 6 – including Alpine, Chevrolet, Aston Martin, Toyota, Nissan and Mitsubishi among others – it was only a matter of time before MINI unveiled its own Vision. The marque after all has established itself as one of the more ‘characterful’ (slash whacky) members of the automotive industry. And let’s not forget that, as a four-time winner of the Dakar Rally – on the bounce by the way between from 2012 to 2015 – and a three-time winner of the Monte Carlo Rally, it seemed only a matter of time before a virtual MINI made it to GT6’s race track.

“Yes, but, a Clubman?” We’ll admit, given the sporting credentials of the Cooper and the ALL4 RACING Countryman, that MINI’s wagon seems an odd choice. Peal back that distinctive body style though – complete with scissor doors, 22in bicolour rims, elongated roofline, and beefed out wheel arches – and you’ll find a 395hp four-cylinder mated to a six-speed transmission good for 0-100kph in just 3.5seconds. Hard to imagine an all-wheel drive MINI Clubman, even a virtual one, outsprinting a  Ferrari California T to the ton.

Any Gran Turismo 6 owners intrigued and ready for some hot laps, the MINI Clubman Vision Gran Turismo is now available for download. 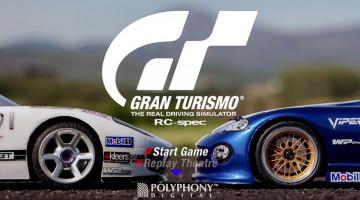