Following the unveil of the new special edition Aventador LP 750-4 Superveloce and the new Audi R8, we take a look back at an epic road trip with the R8 V10 Spyder and LP570-4 Performante. Convertible-style.

On the face of it, there shouldn’t be a lot of difference between two convertible supercars, both powered by the same incredible engine. The Audi R8 V10 Spyder and the Lamborghini Gallardo LP570-4 Performante share enough DNA to be siblings, but these twins are not identical. Far from it. In fact, they’re a great example of how much room for manoeuvre there is within a genre, even when produced by the same corporation.

The chief ingredient on both these cars is the 5204cc V10 engine. It’s identically mounted amidships, behind the driver and in front of the rear axles. Even the platforms share components – the R8 is based on the Gallardo’s foundations and both send their considerable horsepower to all four wheels.

And yet despite their common parents in the form of the Volkswagen Group, the Audi and Lamborghini badges couldn’t really be more different. One is an austere, practical and efficient German organisation, while the other is a flamboyant Italian firm that went from making tractors to lunatic poster cars in a fairly short space of time. So an in-depth, on-road investigation into how these disparate machines go about their business should prove interesting.

To help me, I’ve brought in a man who knows a thing or two about supercars. Jon Simmonds has helped out on crankandpiston.com tests before, and as a UAE GT champion race car driver, he’s more than comfortable with a bit of high horsepower fun. As we meet at the C&P Oval Office and prepare to cruise out of Dubai, it’s horsepower that seems the logical place to start this comparison. The Lambo uses the same tune as in the Superleggera Coupe, with 562bhp. In fact, the Performante is very similar to the lightweight coupe in its approach. It’s some 65kg lighter than the regular Spyder but still 75kg lighter than the regular coupe, and the need for the folding roof mechanism means it’s 145kg heavier than the Superleggera. Nevertheless, the stripping of weight and all that power means there’s no mistaking its intent. 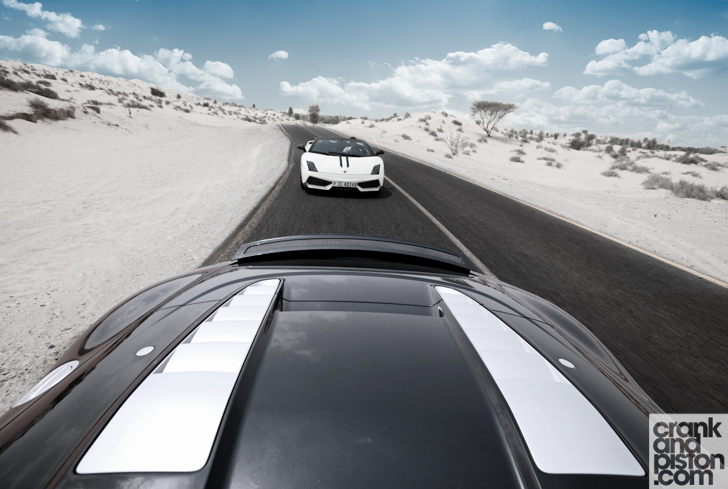 Not that you’d make such a mistake looking at it. In its shimmering white paint and carbon fibre elements dotted all over the exterior, it’s a mean, focused looking bit of kit, although the black roof looks small and misplaced compared to the sharp angles elsewhere. It looks like a bodybuilder holding a parasol. Carbon splashes all over the side sills, diffuser and door mirrors, on the underbody and across the engine cover. Open the doors and there’s yet more black weave inside; on the transmission tunnel, the door panels and on the bottom of the steering wheel, as well as the back of the thin bucket seats. Anything that’s not carbon fibre is covered in swathes of Alcantara; the steering wheel and the dashboard are fully clothed in the stuff. It’s all very motorsport, very performance, very in-your-face.

The Audi, on the other hand, isn’t. It’s dramatic, don’t get me wrong; it’s a mid-engined convertible supercar, and even in the relatively restrained colour combo of our test car (black, with a burgundy roof), it has presence. But it’s a refined, classy presence, much less shouty in its appearance. You can sort of imagine non-car fans paying it scant attention on the road. Ain’t nobody missing the Lambo. The uninterested will be missing something if they pass the Audi by though. Its roof fits better with the overall shape of the car than its Italian stablemate, looking like an integral part of the design rather than an afterthought. The interior is unremarkable for a supercar; pleasant, but not very exciting in its design. It is, as is usual for Audi, very well made however.

Enough standing around; after a three minute delay as Jon tries to figure out how to put the Lamborghini into reverse (via button to the left of the steering wheel, obviously), we get out on the road. Once settled into the R8’s seat and on the move, there’s more of a sense of occasion than I initially gave the car credit for. Despite the subdued interior, the driving position is low, and the transmission tunnel high. It’s undoubtedly a high-performance, cockpit-like interior, and the view out of the rear window is suitably tiny. 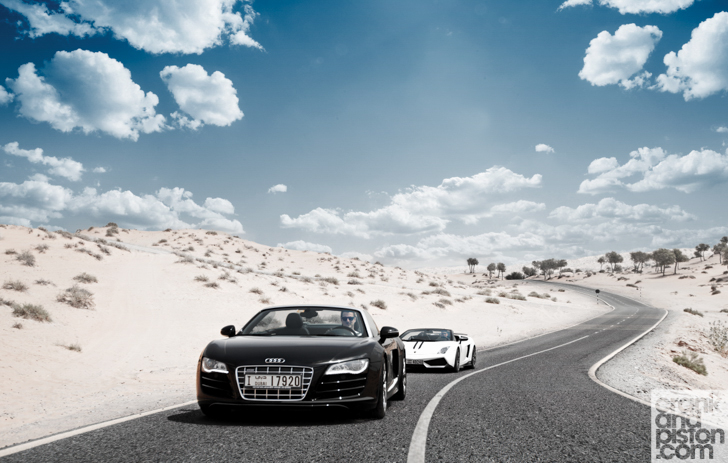 The ride as I get out onto the motorway is ridiculously supple for a supercar. I expected bone-shattering stiffness, but the magnetic dampers soak up everything superbly while rendering body roll a distant memory as I power around the on-ramp. And as I open up the throttle, I savour the 518bhp engine’s warble. It’s a deep, rich and complex noise, not the scream that I remember from Formula 1 V10s. In fact, it sounds like an extra two layers of cylinder noise draped over a V8. Which makes sense, I suppose.

It’s certainly not as loud as the Lamborghini, which is shrieking away behind me and noticeable even though I still have the roof up. The Arabian summer has not quite died away, so I’ll save the topless experience for the real action. On an uneventful cruise north towards the quiet, desert roads of Ras Al Khaimah, I reflect that for a supercar with a lid made from cloth, the R8 is remarkably quiet. At 120kph it’s louder than an A4, but it’s still entirely possible to have a conversation without shouting.

An hour later, we turn off the main road and onto the stretch of tarmac we’ve been waiting for; a ribbon of grey that snakes between golden dunes. There’s no other traffic around. Excellent. Such tight bends, rising and falling with the natural flow of the sand underneath the asphalt, will really give the chassis of both cars a workout, and we’ll find out whether having the top lopped off adversely affects the drivability of these former coupes.

I stay in the R8 to start with, and am immediately impressed by the sheer speed with which it responds and gathers pace. For something that’s everyday docile around town, it’s capable of lightning quick reactions. The throttle blips beautifully, revs climbing in an instant and dropping back down just as fast when the pedal rises. Audi has blessed its Spyder with a hugely grippy front end and the meaty steering works with the tyres to dig in to the road. The four-wheel drive conjures up superb punch and traction out of the corners, although I have to wait a fraction longer than I’m used to before squeezing on the power, as early application washes the car into mild understeer.

The roof is safely stowed now, and that beautiful noise has a chance to caress my ears before being whipped out of the back of the car by a vortex of wind that largely leaves my hair untouched. It really is an orchestral sound, thick with bass notes and shrill harmonies over the top. And the conductor is going at a hell of a lick. 100kph comes up in just 4.1 seconds, and even on these stop-start, tight roads I’m making rapid progress.