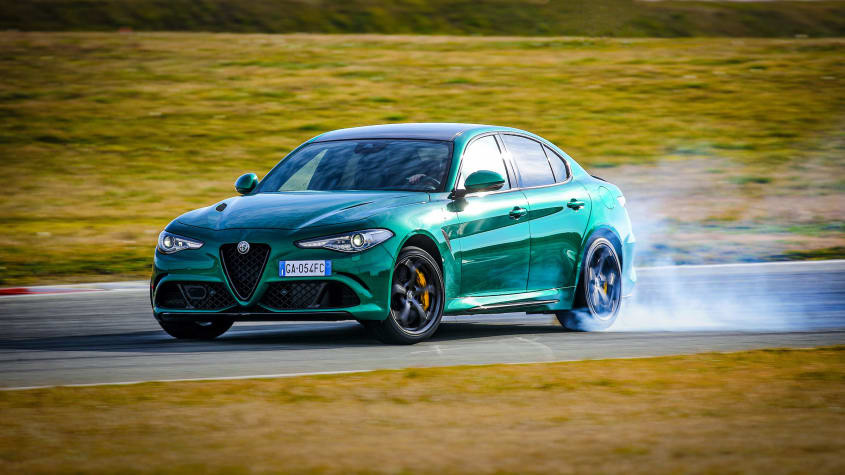 Alfa Romeo has revealed a subtly sharpened version of the Giulia Quadrifoglio, featuring a range of small aesthetic and interior updates that correspond with those seen on the standard Giulia late last year. It also joins both an updated Stelvio Quadrifoglio and the new $186,000 GTA at the top of Alfa’s model range.

The Giulia’s mechanics are mostly unchanged, with Alfa’s 2.9-litre twin-turbo V6 producing the same 503bhp and 442lb ft peak figures at 6500/2500rpm respectively. Power is then sent to the rear wheels via an active locking differential and an eight-speed torque-converter automatic transmission. There is a new titanium Akrapovič exhaust system available as an option though, which also retains the bi-modal valve system that adjusts the exhaust note depending on the driver mode.

The exterior design itself is also largely the same aside from some new rear light units, but Alfa Romeo has extended the available colour options, including a new selection of heritage finishes such as Montreal Green, in reference to its classic V8 sports car that celebrates its 50th anniversary this year.

What has changed more significantly is the Alfa’s interior – a bugbear with the current model – with a new infotainment system and centre console with higher quality fixtures, and a new gear selector. Within the new infotainment system is a performance page and tracker, that will show real-time graphics relaying performance data such as power, torque and torque-split, as many similar systems do in rivals.

Alfa Romeo has also extended its active driver assists in a package that now includes active cruise control and traffic jam assist – features that have been standard in rivals for a generation.

Alfa Romeo has otherwise left the Giulia Quadrifoglio’s package alone, only refining the rough edges that limited its appeal as a package compared to rivals such as the Mercedes-AMG C63 S and Audi RS5 Sportback. But the Alfa’s biggest rival will be BMW’s all-new M3 which arrives later this year, complete with a manual transmission with sales commencing later this summer.