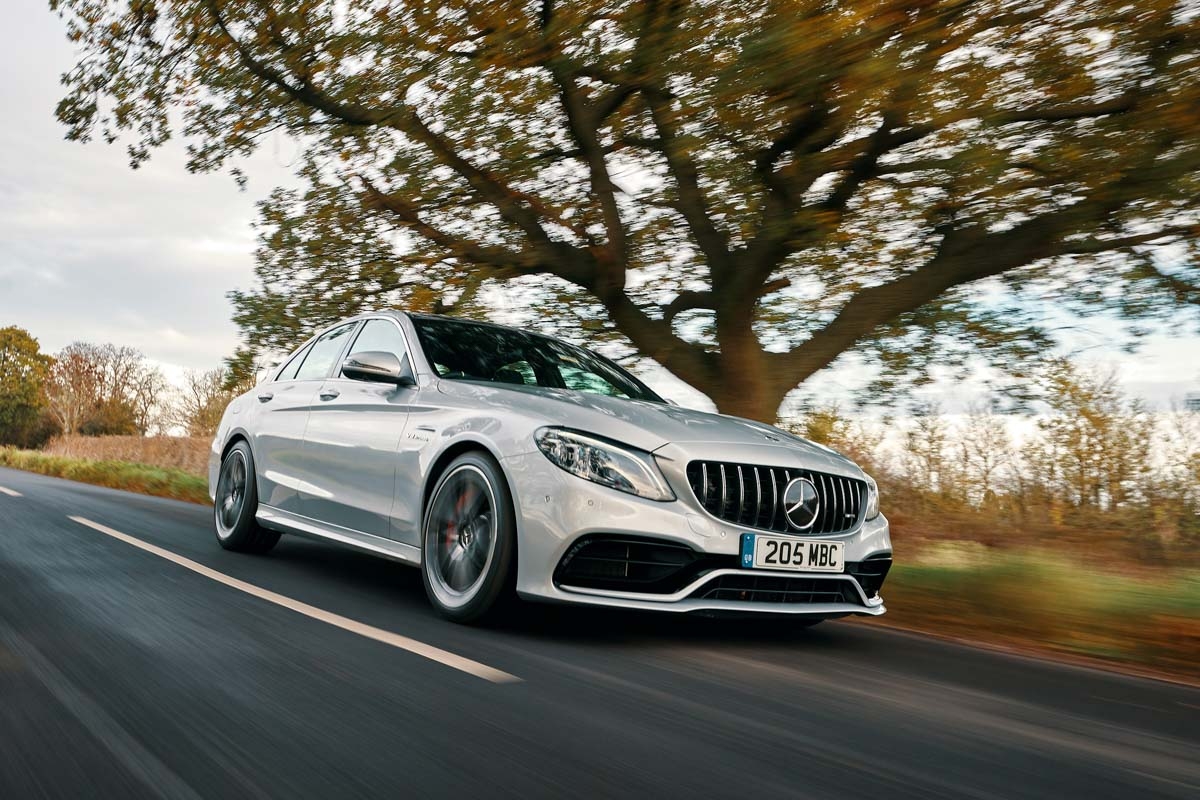 It’s quite the line-up, too. Four body styles (coupe, saloon, estate and cabriolet), two states of tune for the hot-vee 4-litre and rear-wheel drive throughout. So while contemporary rivals from Audi Sport and BMW M have one or two options for you (coupe and forthcoming four-door coupe from Audi or saloon, coupe and convertible from BMW) neither delivers a full quartet and only BMW offers different levels of performance through its Competition Pack and limited run CS models.

Is there a performance engine used in more applications than AMG’s 4-litre V8? I ran out of digits after I’d counted 20 models the twin-turbocharged engine is fitted to. This includes anything from a two-seater Nürburgring lap record menace (the GT R), a five-metre plus long limo (S63), roadsters, coupes, saloon and estates, seven-seat SUVs and, of course, the new G wagen.

The quickest of the refreshed C63 range is the 63 S Coupe reaching 100kph in 3.9sec and limited to 290kph. Its 469bhp brother requires an additional tenth to reach the sprint benchmark and is restricted to 250kph. The S Estate and Cabriolet models are a tenth quicker to 62 than the non-S variants at 4.1sec, with S models of both topping out at 278kph compared to 250kph for the non-S. Opt for the saloon and you’ll 4.0 and 4.1se respectively to reach 100kph and hit the limiter at 290kph and 250kph respectively.

There’s more, too. AMG Ride Control is standard and combines steel springs with adaptive dampers that can be configured as thus: Comfort, Sport and Sport+. And finally (stop cheering at the back), C63 S models get dynamic engine mounts as standard.

Inside the changes are a little less comprehensive. There’s a new 12.3-inch digital display for the instrument cluster and a 10.5-inch display for the infotainment system which includes access to AMG Track Pace – an on board data logger for you frustrated Lewis Hamiltons. There’s also a new AMG steering wheel featuring the touchpad controls first seen on an S Class.

A result of the C63 S’s more focused nature is its harder-edged approach to dynamics. It’s not harsh for the sake of it, every tight damper movement allowing for more commitment and a greater depth of connection between the fleshy bit behind the wheel and, well, the wheels themselves. On the car’s international launch in Germany we came away with a fear that the billiard-table smooth test roads were masking a brittle ride and solid chassis. Thankfully that’s not the case. Yes, a C63 S is firmer than the outgoing M3 and Audi’s RS4, but the pay-off is a far more naturally reacting car.

There’s an alertness to the steering that’s missing in its rivals, with the front tyres hooking up early and allowing the rear axle to provide the shove out of the corner. With AMG’s nine-stage traction control (taken from the AMG GT R and a system that requires time to explore and experiment with to find your perfect set-up) the attitude and the angle the rear axle can take through and out of the corner is all down to you and how friendly you want to be with your local tyre fitter. Gratuitous oversteer aside, the new TC system does allow you to tailor the C63’s dynamics to suit your preferred driving style, adding an additional layer of detail to its behaviour. It’s one of those rare pieces of technology that adds more to the driving experience that it removes.

BMW has three body styles to rival AMG’s four: the $77,497 M3 saloon and $78,110 M4 coupe and cabriolet. Unlike Audi, BMW M also offers a few performance options: standard, Competition Pack models and CS, although not for the M4 Cabriolet.

Leaving Germany for a moment, there is also Lexus’s rather splendid $79,202 RC F coupe, a choice but one with the most charismatic engine of the lot and an unexpectedly sweet chassis, too.