All the benefits of the Huracan Evo RWD coupe, but with the wind rushing through your chest hair 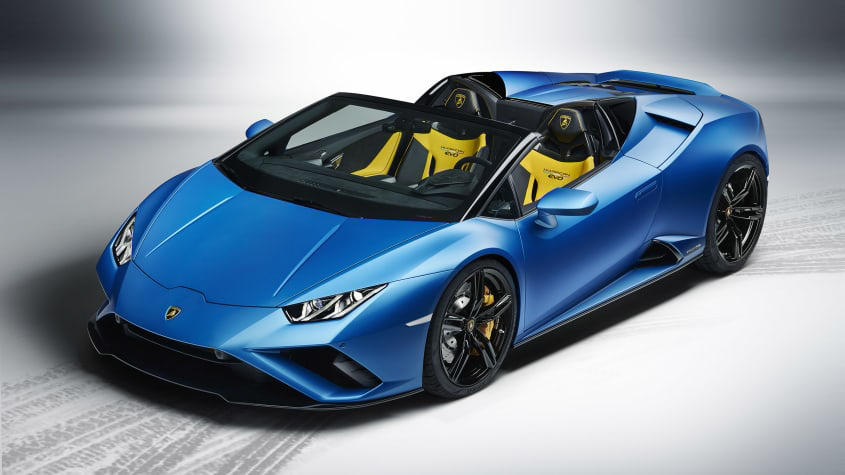 If you find yourself a fan of the Lamborghini Huracán but worry that the standard version isn’t fast, rear-wheel drive or open-topped enough for you, then fret no longer as Lamborghini has announced just the car to meet your needs.

The Lamborghini Huracán Evo RWD Spyder, a car that with a 0-100kph time of 3.5sec you could be up to the national speed limit in before uttering its full title, is basically the amalgamation of all existing Huracán variants, pairing the recently introduced rear-wheel-drive layout with the sun-worshipping body style.

As an Evo model it packs the familiar 5.2-litre V10 also found in the Audi R8 in 602bhp form, good for the aforementioned 3.5sec sprint and a top speed just over 322kph. With a dry weight of 1509kg, it’s 33kg lighter than the conventional Spyder, though the extra weight of the reinforced Spyder body does put it 120kg more than the fixed-roof Evo RWD.

Drop-tops are as much about sense of speed as anything else though, and that’s the angle Lamborghini is playing with this latest model. With all the power now handled by the rear wheels alone, Lamborghini describes it as an ‘instinctive driver’s car’, placing more emphasis on the driver’s skill.

Traction control has been adjusted as a result – read into that what you will – and as ever the ‘ANIMA’ settings allow progressively less intervention, with minimal wheel slip in Strada, a safe degree of slip built into the Sport mode and a specially calibrated Corsa setting for track use, designed to maximise traction without undue intervention.

Dampers are passive, and like the R8 the Evo RWD Spyder uses dynamic steering, which is no longer such a bad thing these days in our experience. The standard wheels are 19 inches in diameter (20s are also available) and wrapped in Pirelli P Zero tyres, while carbon-ceramic brakes are optional.

RWD models get a slightly different body styling package to the all-wheel-drive cars, mainly focusing on re-profiled front and rear bumpers. Lamborghini does say that drag and downforce are unchanged from that of the coupe, thanks to the Spyder’s focus on aero, while one of the key factors is of course the folding roof, which can complete its task in 17 seconds and at speeds of up to 50kph.