With 2014 just started, Audi are first to the punch with this. The Audi Sport quattro laserlight concept car. A show car that embodies Audi engineering competence and shows cutting-edge electronic features such as high-performance laser-light headlights. Oooh! 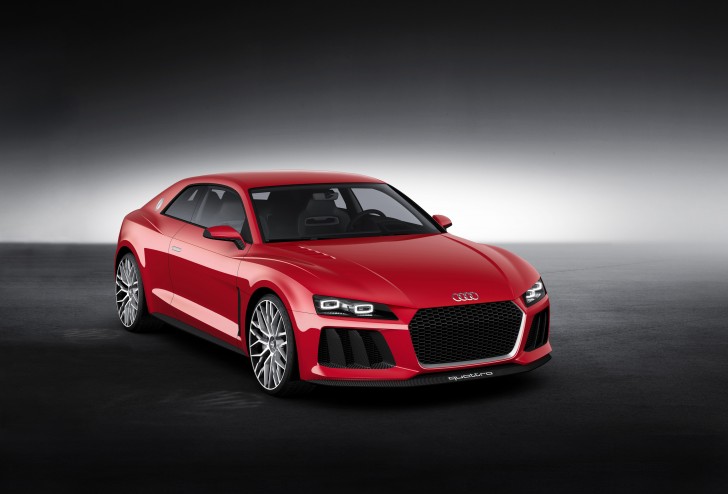 Audi seems to be a bit of a fan of concept cars at the moment. The brand that’s openly admitted that it needs to sort out its slightly bland appearance is going full steam ahead with cutting-edge design and technology. This, the Audi Sport quattro laserlight concept car, is seemingly the third iteration of the stunningly sexy quattro concept the brand dropped in 2010, after the second version shown in Frankfurt late last year.

The new show car is trying its best to demonstrate the Audi core brand value of ‘Vorsprung Durch Technik’ – Forward Through Technology – according to a very well qualified man by the name of Prof. Dr. Ulrich Hackenberg. With e-tron technology onboard pushing out a ridiculous 700bhp and only consuming 2.5 l/100 km of explosion juice, it certainly has the right bits down on paper.

But what of the real reason for the car? The laser headlights! These are apparently capable of leaving all previous systems in the dark (HAH!) with its higher performance by combining matrix LED and laser light technologies. Two low-profile trapezoidal elements are visible within the headlights – the outer one generates the low beam light using matrix LEDs and an aperture mask, while the inner element produces laser light for high-beam functionality.

Audi are claiming this kind of tech is the future. We think it’s certainly the future of ‘get out of my way’ flashing capability. In the Middle East at least.