(Focus today is on the BMW i8 by the way, just in case we haven’t made that clear…)

It’s a cliché we see bandied around for too often these days, but the flagship model of BMW’s ‘I’ sub-brand could legitimately be considered a game changer in the supercar world. Following hot on the heels of the i3 – BMW’s first production all-electric model – thei8 mates a 1.5-litre twin-turbocharged three-cylinder with an electric motor, the former driving the rear wheels, the latter the front. Now while this may not seem overly exciting on the face of it, it’s the execution that will raise an approving eyebrow. Each system works independently of each other but can also work in conjunction for maximum traction, with power and torque capable of driving each wheel individually. It’s a balanced system that ensures the brutal acceleration of a supercar is on-tap without affecting the fuel economy ratings of a plug-in hybrid (consumption, on paper at least, is down to 2.5L/100km). Were that not enough, to keep weight down, the body panels are carbon fibre, while the chassis is built from lightweight carbon fibre reinforced plastic specifically for BMW’s electric cars. This is no concept car gone rogue: this IS the future of motoring, according to BMW. So, with that in mind…

Well, er, none, really. It would be easy to lump the i8 in with other plug-in performance hybrids like the Porsche 918 Spyder, LaFerrari or McLaren P1 were it not for the 500+ horsepower power difference and the quite ungodly $1m price gap. Harbouring a 4.4 second 0-100kph time means the Audi R8 and Porsche 911 Turbo are brought into contention, even though both hit the ton over a second quicker and with little regard for fuel efficiency. Even the all-electric Tesla S has more in common with the similarly plush BMW 7 Series, leaving the i8 in the enviable position of having no real market competitors. Yet. 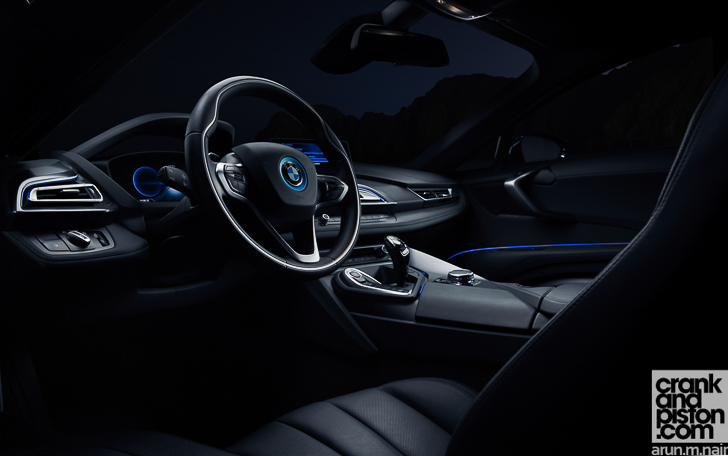 Each to their own, but in my humble musings, the i8’s is a striking look, classic conceptual with a passing nod to the Jetsons. I am a little disappointed that our test model today boasts the Ionic Silver Metallic paint over the more rakish Protonic Blue but it’s a passing quibble. There are after all those slick LED headlights, the ground-hugging ride height, the elegant yet somehow aggressive bodylines, and those flying buttresses. Oh, and dihedral doors. It’s physically impossible to vote down a car with dihedral doors.

Not quite as futuristic as you might expect, given the look on the outside: that dashboard might be curved to within an inch of its existence, but you’ll find that same infotainment system in the BMW spare parts bin. Munich’s typically button-heavy cabin design remains intact too, though in fairness it’s still an elegant design constructed with Bimmer’s typically top quality materials. Ride comfort, even despite the stiffness of that CFRP chassis, is also pretty supple, lumbar support through the seats ample to hold you through the corners. The only slight stumbling block might be the entry and exit: an enormous sill and the mounting of those butterfly doors means a degree of contortion is required, give or take a knock to your dignity.

Practicality. As you’d imagine for a sports car this low and compact, it’s not brilliant. It’s difficult to see much through the über slim rear window and pretty much impossible to see anything through the rear three-quarter view. Though it’s pretty much identical in width to the new Audi R8, from the driver’s seat it feels considerably bigger to manoeuvre in city traffic, and if you’re planning a weekend away with the kids, you’ll want to take the 5 Series, there being no real boot space or rear-legroom.

By the way, we’re not kidding about the 5-Series: part of the i8 owner experience is a replacement model on request should you be embarking on a lengthy journey for a few days. 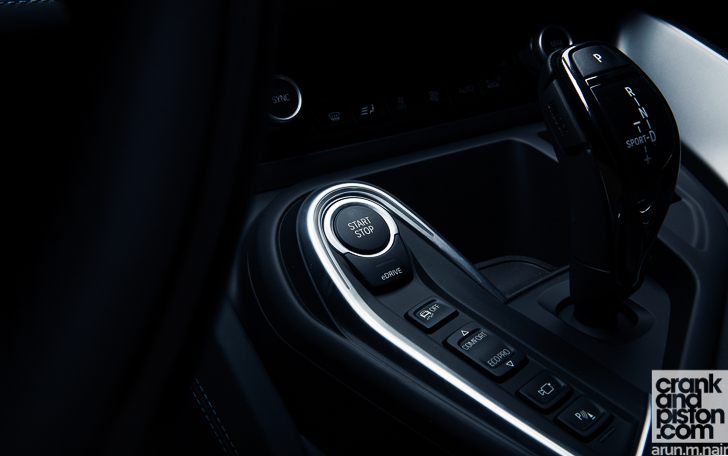 Enough of the cosmetics. Can it shift?

On the face of it, you wouldn’t imagine so: compared with the 602bhp Audi R8 and 513bhp Porsche 911 Turbo, the 357bhp BMW i8 is theoretically more comparable in pace to the 228bhp MINI Cooper, with which it also shares its three-cylinder. Such would be the case were it not for the manner in which the BMW i8 accelerates. Put simply, it is – excuse the pun – electric. In full Electric mode (where [139bhp comes from the electric motor), acceleration is smooth and muscular, tempered with a little more ferocity in Sport mode, which throws in the ‘might’ of that 228bhp engine. Seamless shifts through the six-speed automatic mean acceleration comes in an uninterrupted wave – more so than the 4.4 second 0-100kph time would suggest – alongside a throaty growl from those three cylinders, piped in electronically through the cabin’s speakers. Something that does take the ‘natural’ edge off the driving experience…

Really quite superbly actually. Okay, the i8 is not quite as adept at mid-corner adjustments as the R8 or 911, but the composure is nevertheless scintillating, the Bimmer light on its feet and gliding through the corners rather than attacking them as other supercars might. It’s a similar story through the steering, power steering dialled in more for comfort than honing but response crisp enough to keep you engaged. It’s an altogether more measured approach that matches the i8’s slick character rather well, there less fireworks and more capability thanks to seemingly endless amounts of traction and a surprisingly low kerb weight: rarely do I feel the drive is upended by bodyroll or understeer. 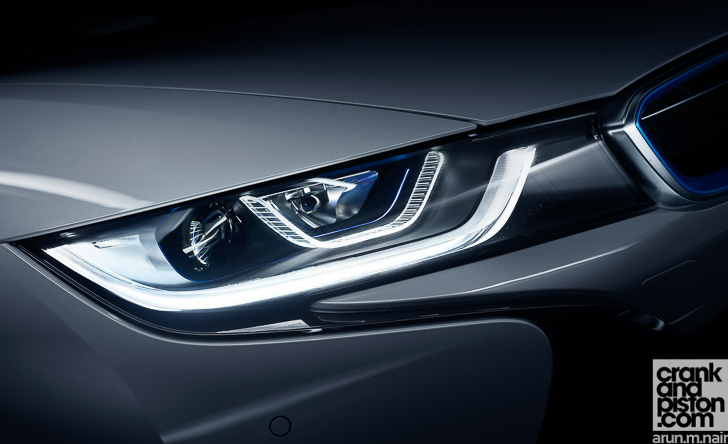 What about the price?

Could be better, could be worse. It’s $175K. A bargain by LaFerrari or McLaren P1 standards but still perhaps a tad on the pricey side. Consider what you get for such an amount though and it begins to make sense: timeless and elegant design; impressive day-to-day running costs; impressive acceleration and yet more impressive cornering capabilities. Stack it all up and it’s a lot to consider. It is ‘the future’, after all 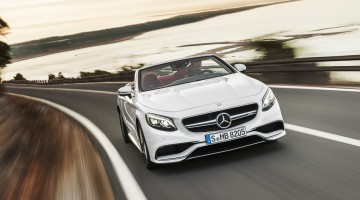