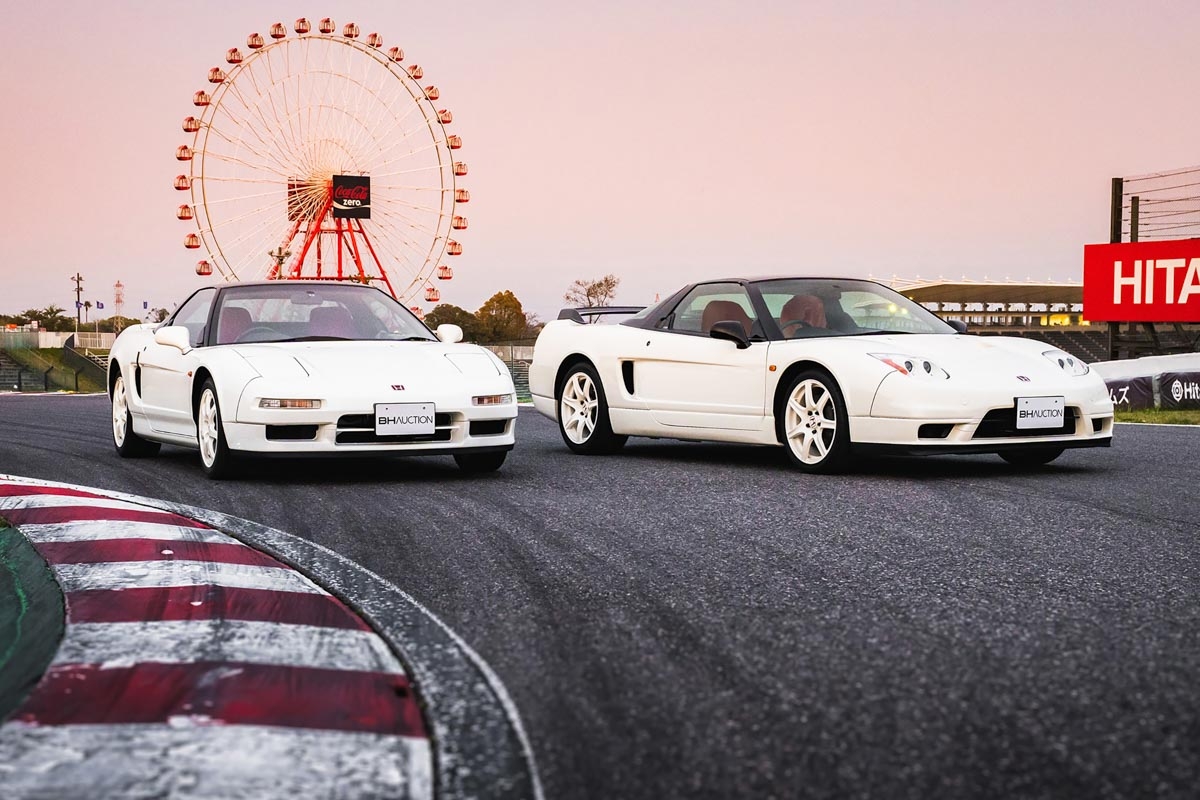 Although highly accomplished, and a genuine five-star evo car, the new Honda NSX remains something of an outlier in today’s supercar category. It’s a trait it shares with its ‘NA1’ and ‘NA2’ predecessors, except, perhaps, when those cars were in their ultimate ‘R’ forms. Top-condition examples of these can fetch Ferrari-esque sums, and this summer’s BH Tokyo auction is set to see two of the world’s best examples of R-flavoured NSXs do just that.

First up is a 1995 ‘NA1’ NSX Type-R – codenamed 92R – only 464 examples of which were produced over a three year span. Honda’s boffins fettled the NSX’s 3-litre naturally aspirated, VTEC-equipped V6 to add some motorsport flare, enhancing the crankshaft, pistons and connecting rods, and employing the same manual assembly method used for the brand’s racing engines. Output was rated at 276bhp – 10bhp more than the standard NSX of the time – while a revised final drive ratio brought even faster acceleration.

Being an R variant, the model also saw a 120kg weight saving over the standard car, with various lightweight aluminium components and even a titanium shift knob helping to reduce weight. Finished in highly desirable Grand Prix White with red seats, this example has covered just 860 kilometres in its 24 year existence. Although it is likely to be the least costly of the two Rs being auctioned, estimates still range from $226,890 to a staggering $272,345.

The second car is an NSX-R (02R) from a decade later. Thought the 1995 car was low mileage? This example has just 558 kilometres on the clock and is even rarer, too, with only 140 ever seeing the light of day. The NA2 NSX-R was renowned for being the only model in its class capable of generating downforce, with a carbonfibre bonnet, finned front undercover, a rear diffuser, spoiler and various other aero components earning it those credentials.

The model features a similar motorsport-inspired power plant as the 92R, but with a larger 3.2 litre capacity. A revised final-drive ratio was once again fitted, this time alongside a six-speed (rather than five-speed) manual gearbox, while various lightweight components lowering weight by 70kg. Finished in Champion White with the all-important red seats, this model is expected to sell for between $345,000 and $435,500. Even that lower figure is more than the starting price for a brand-new Ferrari 812 Superfast…

Though we’d much prefer to see such cars being driven than being kept wrapped in protective plastic film, these examples offer the rare opportunity to experience such icons in factory-fresh condition, many years after production ceased. Both will be up for offer in July at BH Auction’s Tokyo event. If you have a few hundred thousand to spare, it’s time to book your flight…