Which rear-wheel-drive, naturally aspirated V8 should you choose? 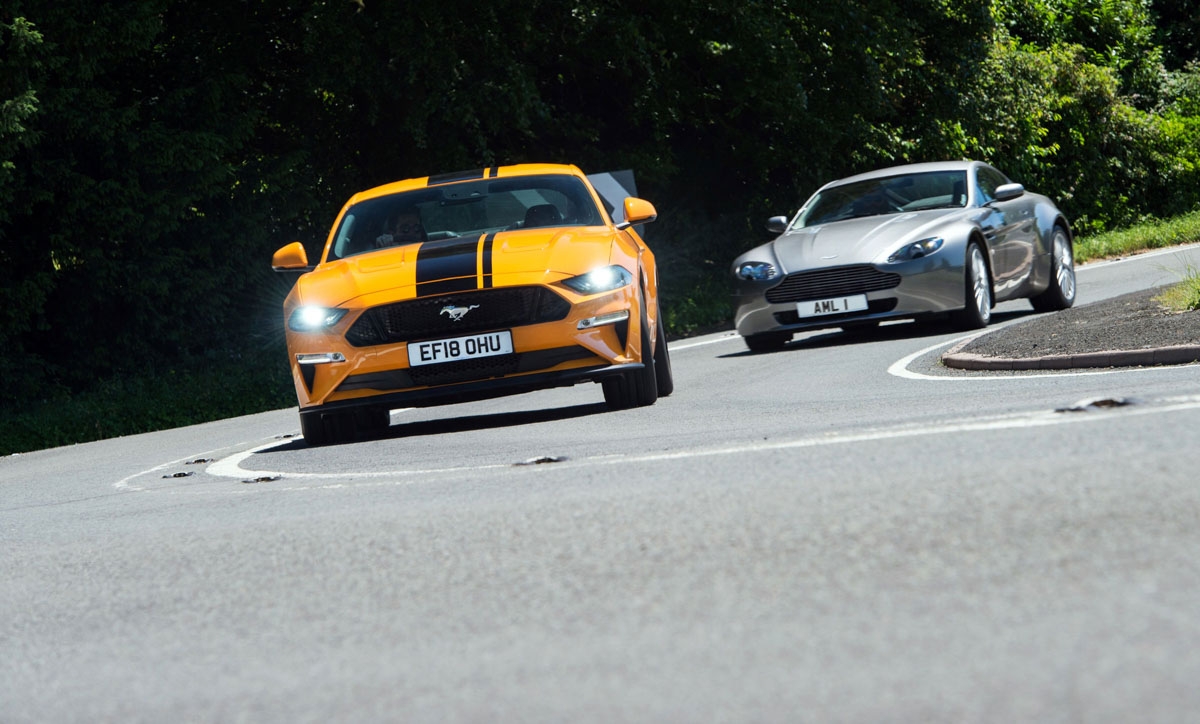 This is a tale of two V8s. One car is raw, very mechanical in feel and wears its heart proudly on its sleeve – you know the sort of thing. The other is a bit less physical to drive, friendly even, and has quite a few advanced features – oh, and it’s not the one built in Gaydon. Yep, consign the old blue collar clichés to the bin straight away, because the latest Ford Mustang might still look like a good ol’ boy ready for some misdemeanours, but it’s resolutely moored in the 21st century these days.

So you’re on the starting line, metaphorically speaking, with just over $50,000 to spend, and you want a V8 coupe. Fuel costs are not something you’re worried about – unless they’re going to be truly dreadful, that is – but naturally you have at least one eye on running costs.

Contenders to buy new at this price point have been thin on the ground in recent years, limited to some Vauxhalls of Antipodean parentage, but more recently there’s been the advent of an official, right-hand-drive Mustang to consider, and it’s just been facelifted, too. At evo we’ve got a lot of time for the Mustang – well, the V8 version at any rate. It’s not hard to see why its been something of a minor sales success in Europe, given its refreshingly bold personality, raw performance and value for money.

Then again, this particular conundrum may begin and then end almost instantly due to the styling of our used contender, which remains as spectacular as ever. Like a good many cars, the Aston Martin V8 Vantage may have gained new wheels, trim, carbonfibre body parts and all other manner of tinsel over the course of its long production run, but to these eyes at least there’s none more striking than the original version launched in 2005 – it remains a stunningly handsome machine, and one that still turns heads and garners positive attention to this day. Dare I even say it’s a better-looking machine than the new Vantage?

If you can resist the visual charms of the Aston, the Ford doesn’t look bad either. Yes, there’s a slight bulk to its overall surfacing and proportions that can’t quite cash in on the promise of its individual design details: it’s a big slice of Americana when parked next to a normal car, let alone the svelte Aston (itself a chunky coupe when compared to a 911 in-period), but there’s no doubt it has quite some presence amongst a sea of premium German saloons and faddish SUVs.

Those looks aren’t deceptive, either, because at 1668kg the Mustang is a heavyweight in all senses of the word, although the 1630kg Aston isn’t as light as its aluminium chassis would have you believe. No, neither car is a delicate entity; they’re both burly, rear-drive V8 monsters to a degree, but that also means both aren’t as intimidating to drive as you might expect, because mass dampens down their initial performance.

Get past the Aston’s fabulous looks and one of its key appeals is the analogue nature of the driving experience. It’s not even 15 years old yet, but already the combination of hydraulically assisted power steering, a manual gearbox and a naturally aspirated V8 seems as antiquated as a classic from many decades past. In short, they simply don’t make cars like this anymore.

More’s the pity. If we’re being really honest, the Vantage, particularly in its original 4.3-litre guise as seen here, was never quite as good as the hype suggested. The original V8 had the power (380bhp), and it definitely made the right noises, but it lacked the kind of low- and mid-range muscle required to move that hefty kerb weight along at the sort of pace that could really worry a 997 Carrera S. The chassis wasn’t quite there, either, with a disconnect between front and rear axles that nibbled away at the driver’s confidence when pushing on. The 2006-2008 Prodrive version’s tweaks went a long way to improving that, echoed by the official Sports Pack a bit later on. You might be able to find one of those cars, and of course there’s nothing to stop you retrofitting those bits or parts from the aftermarket these days.

The later 4.7-litre cars (from 2008) had more cohesive handling as well as stronger mid-range torque, but you’ll be looking at a higher-mileage example at this sort of budget for one of those (not necessarily a bad thing, as our expert view attests – see page 118).

None of this should make you think the Vantage isn’t desirable, however. Just the thrill from opening your garage door and seeing this on a Sunday morning is hard to quantify, and the way that V8 sings at higher revs is a joy. It’s an event from inside, too: yes, the satnav is unremittingly terrible and visibility out isn’t the best, but it does feel special, and as this car proves, they do wear their age surprisingly well.

The engine has a soft response at idle and low revs that belies its enthusiasm higher up the rev range, and the gearshift requires a sturdy shove from the shoulder. The steering, too, makes no attempt to be finger-light at parking speeds, despite the power assistance. It’s not a difficult car to drive but you do have to concentrate on what you’re doing to make smooth progress.

Ranged against such regal firepower, the Mustang begins to wilt a bit. Well, at least until you press the starter button down at the base of the centre console. Then you’ll be grinning like an idiot. After the Aston’s highly strung, frantic bellow, the Mustang’s motor is pure Detroit heavy metal and all the more glorious for it. With the valved sports exhaust on the latest car it has to be one of the best V8 noises I’ve heard in a long time, and it loves to rev too, feeling particularly strong as it shrieks past 7000rpm.

Crucially, it’s this sort of quality that means driving the Stang is enjoyable at any effort level – you don’t need to be compressing the sidewalls to get some fun out of it. It’s a bit like owning a classic car and a modern car all rolled into one: the noise, the upright dash with strong hints of ’60s design to it, the laid-back driving experience – still not the sharpest if we’re honest in terms of turn-in and body control – all have a classic vibe, but the infotainment system, the driving modes, the painless ownership experience, they’re all what you’d expect from a brand new car.

Unfortunately, this particular press car isn’t fitted with the optional ($2000) MagneRide suspension, and that means it can lack composure without much in the way of provocation, but when we’ve driven a car so equipped we’ve been impressed with the improvement in the Mustang’s general deportment.

A hefty chunk of what you’re buying into with these cars is heritage and emotion. Where both score heavily is in the way they make you feel, and the power of history they conjure up. Names like ‘Mustang’ and ‘Vantage’ have a resonance about them that can make you smile just thinking about the cars they are attached to, let alone when you know that the key is in your pocket and your name is on the V5.

As such, there isn’t really a loser here, but if pushed I don’t think I could resist the temptation of the Aston Martin. Given you can get a perfectly decent early 4.3-litre car for around $38,000 it’s something of an outrageous bargain, and if you’re requiring that little bit of extra justification to get the purchase over the line, it’s not as though values of old Aston Martins don’t have a habit of rising in the long run…

With thanks to Mark Palmer of The Supercar Rooms.

‘The Vantage generally wears its mileage well, and high-milers can actually drive better than really low-mileage cars, as long as they’ve been maintained well.

‘When you go to inspect the car take a close look at the paintwork, and if you’re not confident, take someone along who knows what they’re looking for. Vantages can suffer from corrosion on the doors – along the edges, around the handles and the wing mirror supports. Most will have had rectifying paintwork for this and the inevitable stone chips on the front, but how well has it been done? They can rust around the rear wheelarches, too.

‘Inside, if the leather on the seats hasn’t been fed it can crack on the driver’s seat bolster. Unless it’s really bad, a few feeds can bring it back. Yes, the satnav is horrifically poor, but do at least check that it rises out of the dash, and make sure there are no engine warning lights on as Vantage’s are sensitive to sensors.

‘On the suspension side, the older 4.3-litre cars can break springs near the bottom of the coil, and while you probably won’t hear it, it is an MOT fail. The part alone is $450, so it soon adds up. Dampers can leak with age, but that’s not as common, and wheel bearings sometimes grumble, so on a test drive make sure you get up to a decent speed. As for the brakes, the pads are hard, so they do wear the discs out, and genuine parts are costly.

‘The biggest headache is the clutch. It depends on driving style and where the car is driven, but they can go at 32,000 or 128,000 kilometres. The clutch can be heavy and have a high bite-point yet still be OK, so it’s almost impossible to say when it’s going, other than if its obviously slipping. It’ll cost $3100 to $3800 to replace a clutch, depending on whether you go for an original or an uprated twin-plate item. Remember, it’s an Aston Martin, with Aston Martin parts prices.

‘On a brighter note, the V8 engines are great and rarely give any problems. The hydraulic tappet adjusters can get noisy, but aren’t hard to change, and only a significant oil leak from the timing chain cover at the front is bad news. Rectifying it is a massive job as the whole front of the car has to come off to remove the cover. The part is only $150, but the labour will be $2500. Most cars have probably had it done by now. Finally, make sure the seller knows how to check the oil level: it’s a dry sump set-up and there’s a specific procedure. A four-year/65,000-kilometres gearbox oil change is important, too, and helps the gearshift quality.’