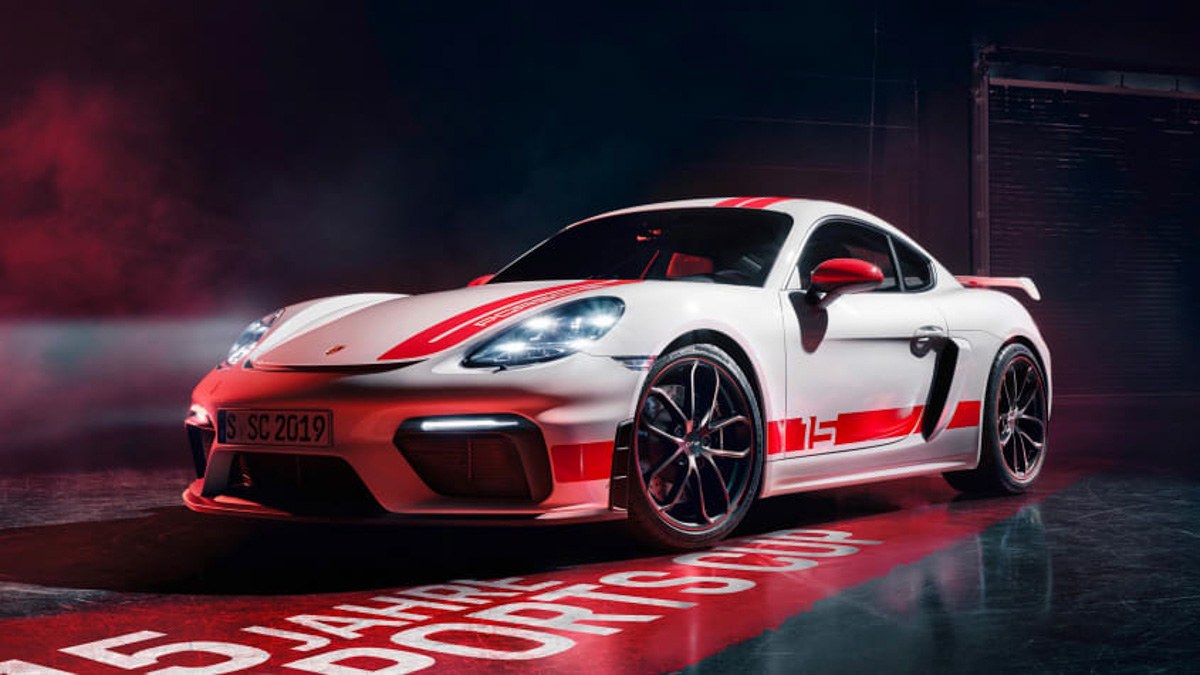 Revealed at the Hockenheimring during the opening of a new Experience Centre, the Porsche Cayman GT4 Sports Cup Edition marks the 15th anniversary of the brand’s customer and club sport race series, Porsche Sports Cup Germany. Disappointingly, the new model will only go on sale in Germany, but we’re sure you could get one shipped elsewhere if you were keen enough…

Offered in black or white, the car’s Guards Red details pay homage to Porsche’s motorsport heritage. The number 15 is integrated into the side stripe, referencing the anniversary celebration, whilst the 20-inch black wheels also feature a Guards Red rim flange, and the same colour makes an appearance on the wing struts.

New details don’t stop on the outside, as the cabin gains a handful of unique features, too. Though it’s based around a black Alcantara and leather scheme, the driver’s seat receives a contrasting red Alcantara panel, matching the red stitching and 12 o’clock marker on the steering wheel. Meanwhile ‘718 Cayman GT4 Sports Cup Edition’ is engraved into the door sill, and the centre console armrest is branded ‘Porsche 15 Jahre Sports Cup Deutschland’ to remind you of the model you’re in. Best of all is the complementary indoor car cover, finished in black with red stripes, reflecting the design of the special-edition Cayman.

The head of Personalisation and Classic at Porsche, Alexander Fabig, said: ‘High-quality customisation from the factory is the core competence of the Porsche Exclusive Manufaktur. With the new Sports Cup Edition, we show once more how very special sports cars are created through the combination of craftsmanship and passion for detail.’

No performance upgrades have made an appearance in this special-edition, but it’s not like the 718 GT4 needs them. The naturally aspirated 4-litre flat-six puts 414bhp and 310lb ft of torque to the rear wheels through a six-speed manual gearbox, red-lining at 8000rpm. Standstill to 100kph happens in 4.4sec, with top speed coming at 302kph.