Sally Carrera from Pixar’s hit movies Cars has been turned into a real, working and street-legal special edition in Porsche’s latest collaboration with the film studio and its Exclusive Manufaktur department. The Porsche 911 Sally Carrera Special Edition is a one-off created in the mould of the kids film character, and will be auctioned off at next week’s RM Sotheby’s sale at Monterey Car Week, with the proceeds going to charity.

Porsche has stylised its contemporary 992-gen 911 Carrera GTS to suit all of Sally’s specific elements, including the creation of a new colour called Sally Blue, which isn’t just painted on the body, but various elements of trim pieces including the rear engine cover, front bumper inserts, lower bumper trims and numberplate holders. The headlights are also bespoke, now finished in a bright silver colour, rather than the darker grey or black usually found on modern Porsches.

This Sally Blue colour is also found in the interior, with the trim pieces also finished to match, so too the stitching used on the dash, steering wheel and door panels. While there wasn’t much to go on for the interior’s inspiration (the thought of what’s behind the cartoon character’s windscreen/eyeballs is actually quite macabre) Porsche has taken liberty and paired a chalk leather finish with a bespoke woven fabric that integrates the same Sally Blue colour.

Unfortunately, for those movie/car nerds that are aware Sally was actually a 996.2 Carrera, there weren’t any wheel choices from the current 992 range that would get close to the 996 Turbo-style silver five-spoke design, so Porsche designed new ones. While not an exact replica, the new silver five-spokes share the same directional design as those found on a 996.2, with a contemporary overtone. For those worried about scratching a literal one-off set of wheels, the car will also be supplied with an additional set of Carrera Exclusive Design wheels on their own custom made stand, as well as a customised Porsche Design timepiece matching the car.

The car will be auctioned on August 20 by RM Sotheby’s, with the proceeds being split between two charities, Girls Inc and US for UNHCR. No estimated price point has yet been set for the sale, Pixar’s movies often garner just as much joy and admiration from grown ups as they do children, so we wouldn’t be surprised to see a hefty number being called before the hammer comes down. 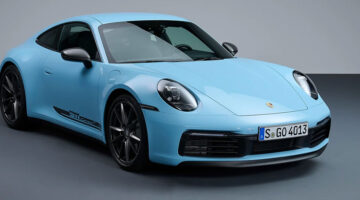