The latest addition to Porsche‘s Gran Turismo Sport series, is the new Carrera GTS really just an ‘S’ with some cosmetic frippery? Or is it genuinely the next step to the race-bred GT3? crankandpiston.com takes an afternoon to find out whether the GTS lives up to its iconic badge

Traditionally when a new sports car arrives in the region, there’s a buzz ahead of the inaugural drive. Said performance machine is new and exciting after all, offering insights into a manufacturer’s potential and providing hints at future, similarly excellent driving machines to come. Things are a little different though with the Carrera GTS, a model that has been completely overshadowed.

That’s not quite as strange a statement as you might think. That the 911-rivalling Mercedes AMG GT launched at about the same time as the Carrera GTS was just bad luck for Porsche: as their debuts dawned, the automotive world showed greater interest in the latest from Affalterbach than ‘just another 911’. Even within its own ranks, the Carrera GTS has played second fiddle. The brand new Cayman GT4 for instance has taken the automotive world by storm, boasting 50bhp more than the Carrera GTS and a price tag $40K lighter. Indeed, in some quarters the GT4 is already being touted as the Porsche petrolheads have been waiting for. Hardly surprising that the GTS’ limelight has a couple of broken bulbs.

Which is a shame since – let’s cut to the chase – the Porsche 911 Carrera GTS is absolutely brilliant. Marketing teams in Stuttgart may want us to get misty-eyed about the ’63 904 and the iconic beginnings of Porsche’s Gran Turismo Sport series, but the lineage of the current GTS line-up dates back only to the 2007 revival. With tweaked…well, everything, the new GTS range took Porsche’s already exceptional performance and made it better, without the need to rattle occupant kidneys to gooseberry preserve as the GT versions did. Rather than sketching a brand new car then, this was done by Stuttgart’s brainiest essentially rummaging through the spare parts bin. 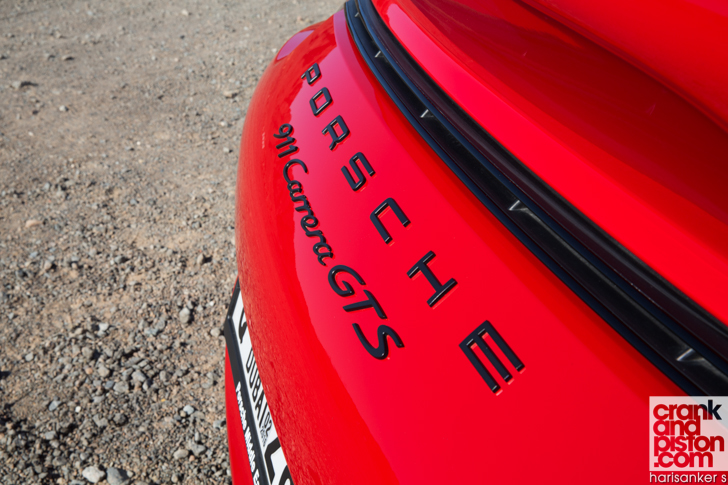 Peel back the Carmine Red paintwork on our test model – examples of which also bathe the tachometer dial and upholstery stitching in the cabin – and you’ll find the beefed up arse and wheel arches of an all-wheel drive Carrera 4, as well as the same widened track. In the back you’ll find the same 3.8-litre flat-six as used in the Carrera S, albeit with 30bhp more oomph (just 45bhp down on the top drawer 911 GT3). You’ll even find the centre-locking 20in wheels as found on the Turbo S. Optional on the S, the GTS also boasts as standard Porsche’s Sport Chrono Package – including the fabled Sport+ button and Sports Exhaust – as well as dynamic engine mounts for extra composure under cornering. ‘GTS’ badging aside, this is no ‘new’ Porsche in the conventional sense, but rather an S-spec model with some cosmetic and mechanical odds and sods. Hardly surprising then that reception to the ‘new’ Carrera GTS has been a bit muted.

To say that the GTS is ‘just’ a spanky new bodykit for the Carrera S however would be a great disservice to those letters – other than G, T and S – working beneath the surface: PASM, or Porsche Active Suspension Management, manages the dampers for optimum traction through the corners; PTV, or Porsche Torque Vectoring distributes more torque to the wheels under load through the corners; meanwhile PDCC, slash Porsche Dynamic Chassis Control, detects roll through the bends and counters it for greater balance. Life is too short for me to describe in detail how these all work, but given that the Carrera S was hardly an unwieldy bison to begin with and that Porsche has massaged yet more performance from these setups for the GTS, chances are old Carmine Red will handle the turns like a mechanical rabbit being pursued by Elmer Fudd. All for less money than a Carrera S with most (if not all) of the option boxes ticked.

That this is ‘just another 911’ then could well be missing the point of the ‘new’ Carrera GTS, and we were keen to find out whether those three extra letters truly made a difference, or were just cosmetic bluster. 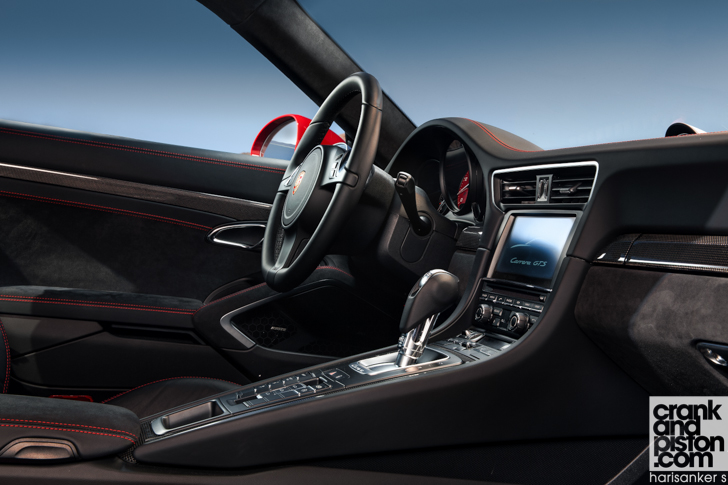 Our route today encompasses little of particular note, a couple of hundred clicks – give or take a road hump or two – across some of our more travelled mountain roads in Fujairah. To get there though requires an hour’s highway driving: Gran Turismo territory.

AJ and photographer Hari in the accompanying Audi A8 camera car may be more comfortable (and envious) but civility in the Carrera GTS is still very impressive, neither the yet-further-stiffened suspension nor the sport seats putting a dent in ride comfort.

Much like the outside, the cabin is traditional 911, save the accompanying GTS insignia and carbon fibre trim. Alongside the Alcantara, Porsche Middle East has also kitted Carmine Red out with some optional flashiness including front and rear ParkAssist and a multi-function steering wheel. More relevant though is Porsche’s excellent Doppelhowthehelldoyouspellthisagain PDK transmission: I’m not a fan of the wheel-mounted rocker switches that come as standard (“is it forward or backwards to change dowoh crap wrong way”) but it’s a racing certainty gear changes will be crisp and bullet-like, as is proven when the road begins to open up.

Truth be told, on paper neither the 424bhp nor 324lb ft of torque read with particular interest: we’ll hit 100kph in a shade over four seconds and – presumably – 306kph with ease, but we’re a long way from the 520bhp of ferocity found in the Turbo just one 911 tier further up (plus that extra 30bhp will only be found at the top end of the rev range). I’m reserving Sport and Sport+ for the tighter stretches of road ahead admittedly, but even still, there’s little visceral drama from the 3.8-litre flat-six when the right foot is pinned, acceleration progressive rather than dazzling as the G-Force reader in front of me affirms.