Alfa is EIGHT seconds faster round Nürburgring than Porsche

Much has been written already about Alfa Romeo’s latest saloon, and not just because it received engineering nous from Ferrari and has the BMW 3 Series firmly in its crosshairs. But, honestly, did any of you ever think you’d see it beat the Porsche Panamera Turbo, a saloon 40bhp more powerful, around the Nürburgring?

Nope, us neither. Turns out the Giulia Quadrifoglio is quick, and bloody quick at that. Thanks to a fine concoction of 503bhp, 443lb ft of torque, a 2.9-litre twin turbo V6, 0-100kph in 3.9 seconds, and some presumably massive hairy gonads on Alfa’s official test driver, the Giulia has just nailed the Nürburgring in 7m 32s, some eight seconds – EIGHT seconds – faster than the Panamera Turbo. That is ABSURD for a family saloon weighing 1524kg and fitted with all the mod-mechanical-cons expected of a production cruiser, especially when you consider that is also faster than a 2006 Koenigsegg CCX (7m 33.55s) and even a 2010 Porsche 911 GT3 RS (7m 33s). That is pants on head levels of mental right there…

Don’t believe us? Check out Fabio Francia’s on-board lap below, complete with lap counter and – ahem – subtle Pirelli sponsorship decals. Oh, and Alfa Romeo would like to emphasise that, in Race mode, the Giulia’s eight-speed transmission shifts gears in just 150 milliseconds. 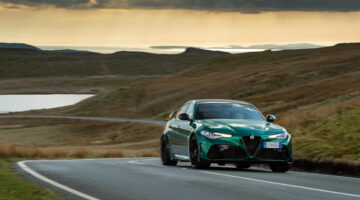