Alfa Romeo Giulia GTAm is the most extreme modern Alfa to date. It’s also one of its very best. 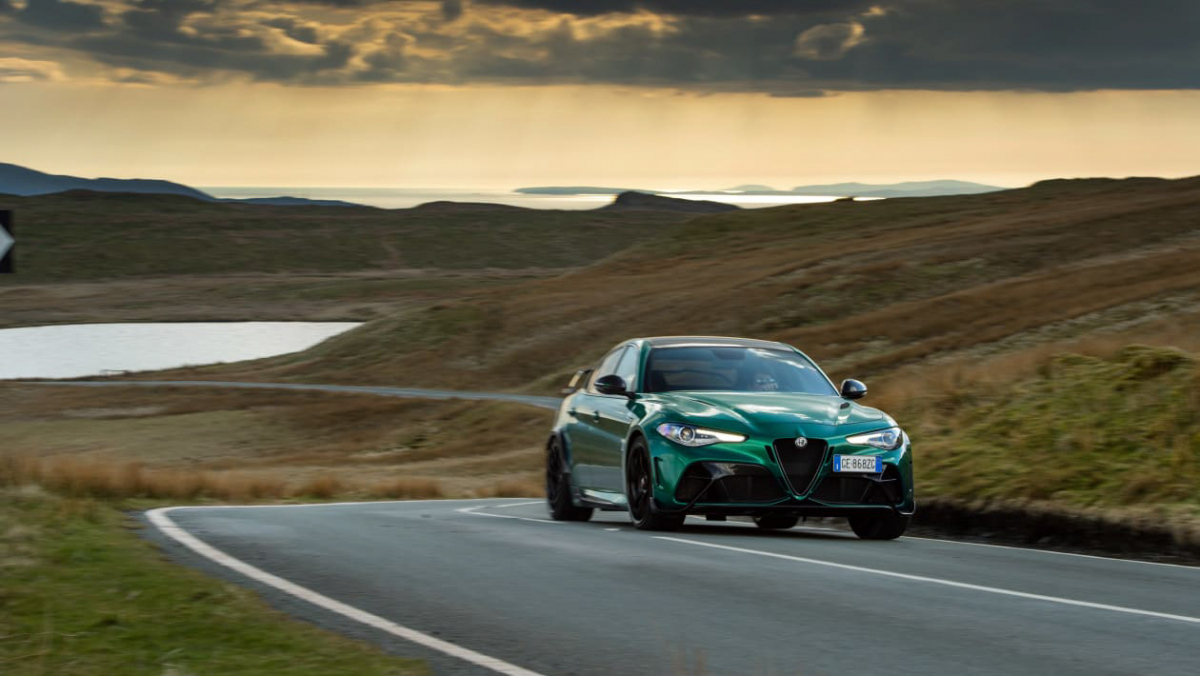 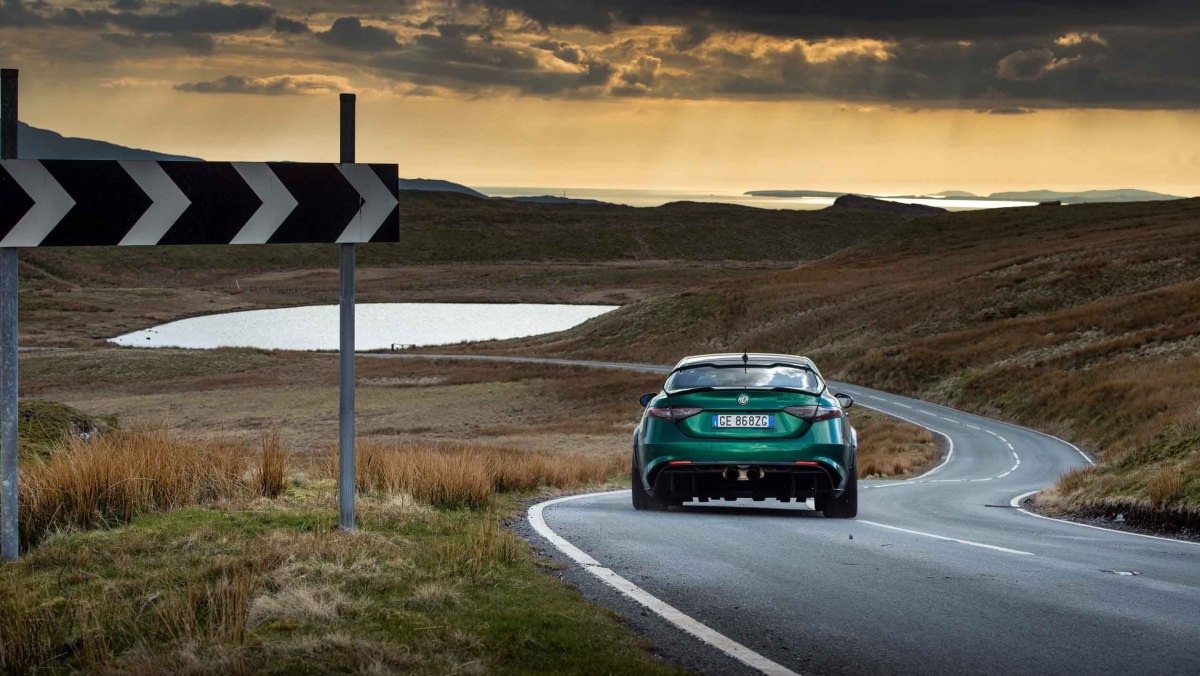 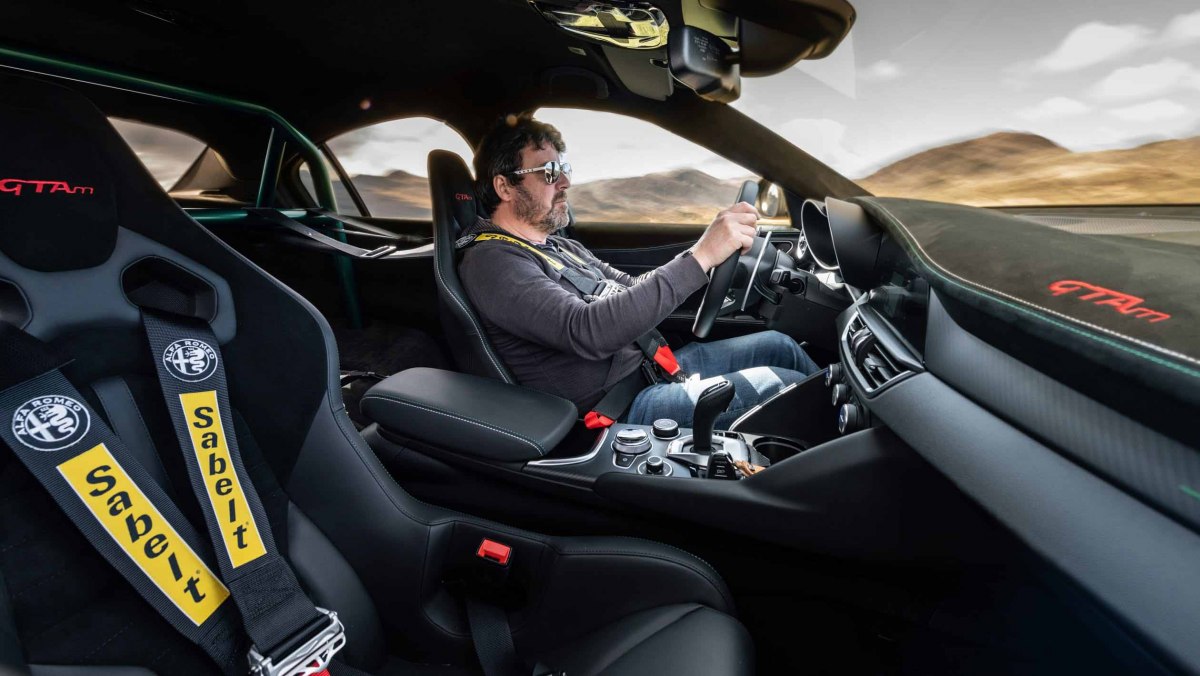 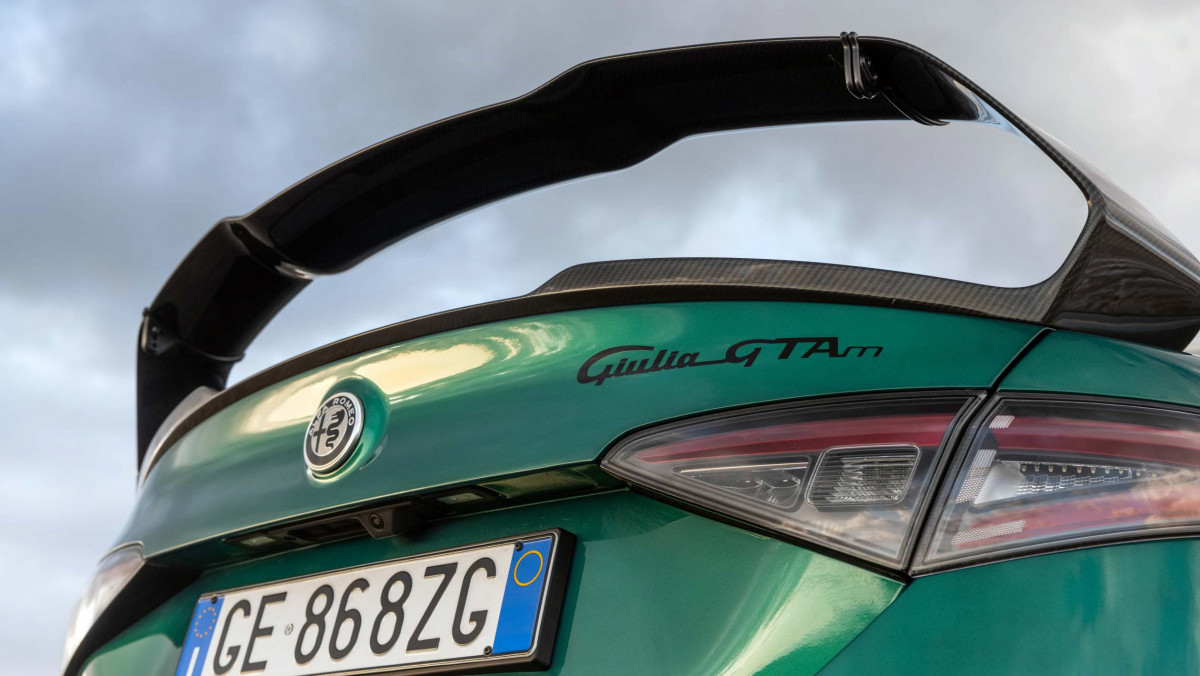 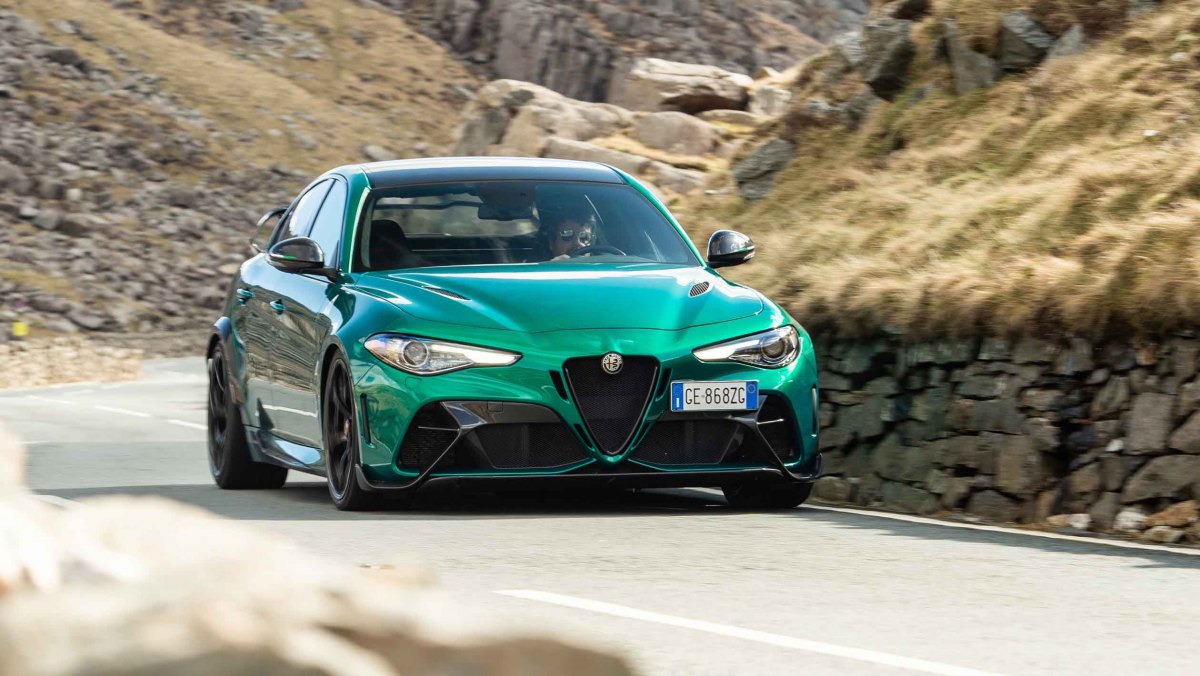 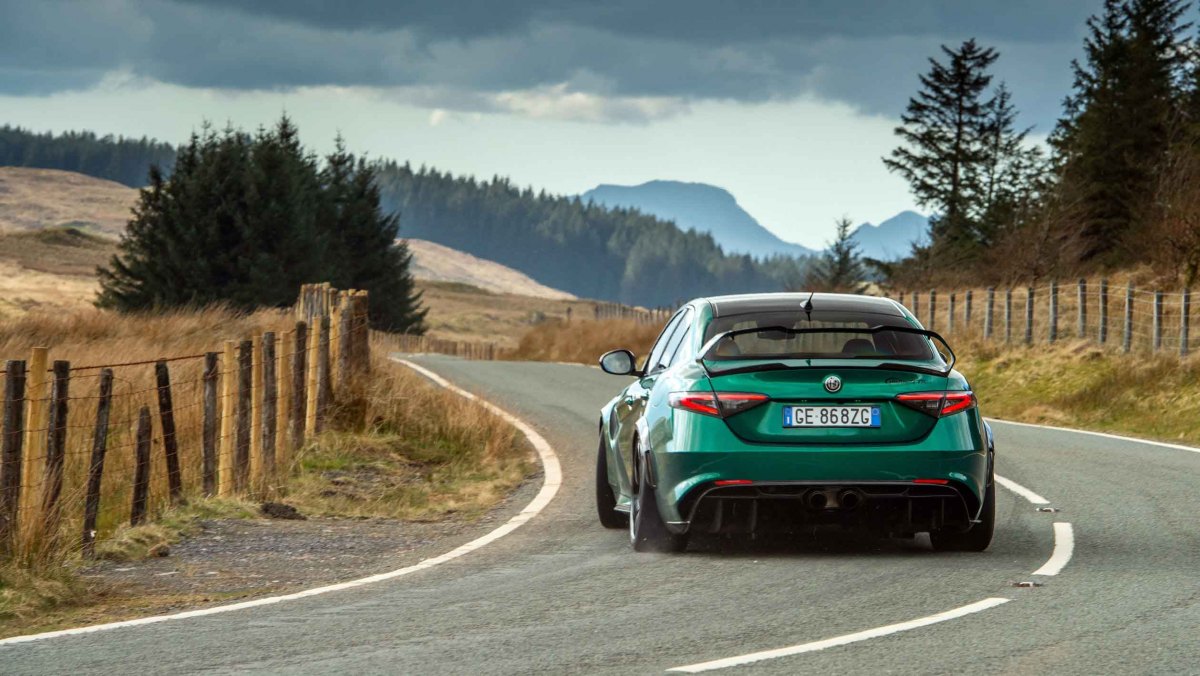 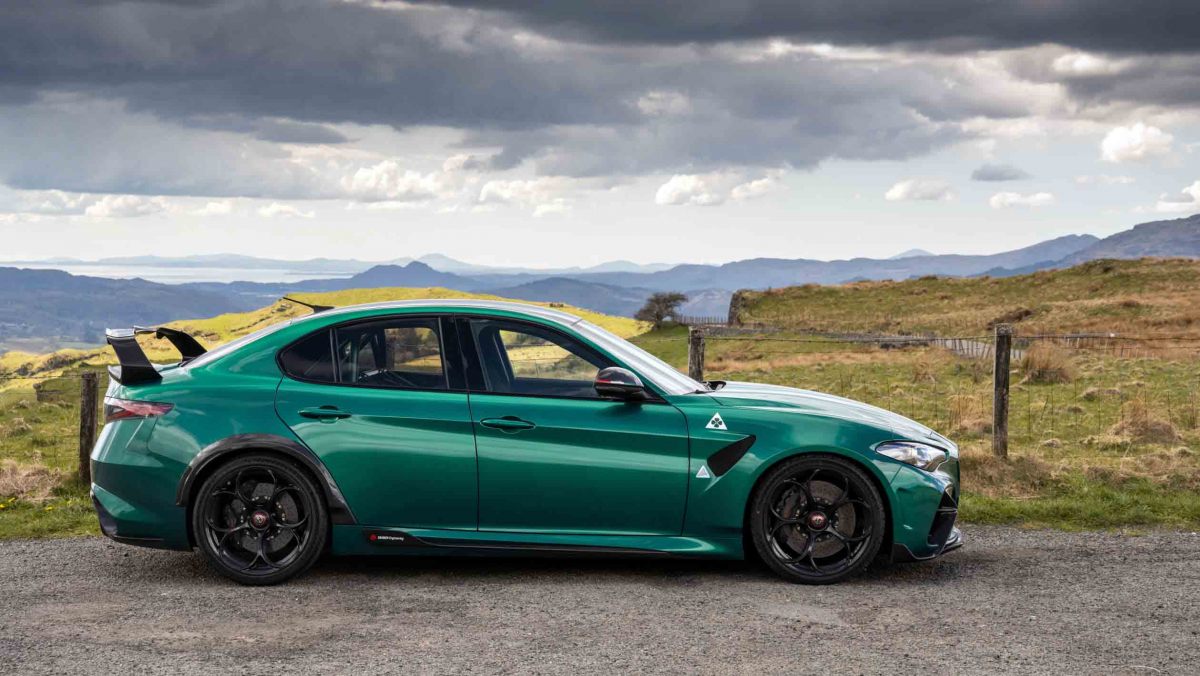 Four-door trackday cars are one of the automotive world’s biggest oxymorons. All the weight and complexity of a conventional four-door car matched to the precision and engineering focus required to turn it into a bespoke performance car for an environment it was never originally designed for. It’s probably why it’s a relatively shallow pool to swim in, occupied only by Jaguar’s loony Project 8, Renault Sport’s Mégane Trophy R and now Alfa Romeo’s Giulia GTAm. All $218,020 of it.

Built to celebrate the Italian company’s 110th anniversary, the GTAm (there’s also a less extreme GTA, too, with production capped at a combined 500 units) is the ultimate expression of a Giulia Quadrifoglio, created by Alfa with a little help from its F1 team’s wind tunnel and drivers. Which means it’s a feast of carbonfibre aerodynamic devices, bulging arches and sticky rubber; in short, it’s a piece of Italian madness/brilliance (delete as applicable).

Building on the already class-leading Quadrifoglio, the GTAm aims to improve every key performance attribute, which we’re pleased to report it does. Its against-the-clock gains are marginal but the additional layer of detailed feedback, the sense of connection you have behind the wheel and the adjustability in the chassis make the GTAm one of the most desirable cars we’ve driven this year.

The power increase might not match the GTAm’s looks, but the 2.9-litre twin-turbo V6 has had more than a new ECU map uploaded. Internally there are new, lighter con-rods accompanied by new cooling jets for the pistons, a new oil cooler, and faster spinning turbines inside the pair of turbos. There’s also an Akrapovic exhaust system, although the latest gas particulate filter mutes the majority of the enhanced soundtrack.

These changes mean there’s a 30bhp increase to 533bhp, but torque remains at 442lb ft to give the eight-speed auto and the rear differential a fighting chance. The GTAm will crack the 0-100kph sprint in 3.6 seconds.

Let’s start with the body, which uses carbon or aluminium for every panel where possible, polycarbonate for the rear windows, and has adjustable aero devices front and rear that allow you to dial-in as much as double the downforce of a regular Giulia Quadrifoglio.

There are larger openings in the front bumper to improve engine and brake cooling as well as to manage airflow for the underbody aero additions, which are fed by the two-way adjustable splitter. The wider front arches allow for a front track increased by 25mm, while wider rears with their bolted on carbon elements allow for a 50mm track increase. Carbon side sills draw turbulent air away from the front wheelarches as cleanly as possible, with the three-position adjustable rear wing and more extreme rear diffuser designed in unison to maximise performance. Under the car a series of detailed aero vanes have been fixed to the floor.

In terms of chassis changes the ride height has been dropped and the new springs are lighter to compensate for the car’s 40kg weight reduction, with the active dampers also recalibrated along with the steering ratio.

There’s a new 20-inch forged alloy wheel with a single-nut locking system and Alfa turned to Michelin to develop a specific Cup 2 tyre for the GTAm. Brembo has also developed a new carbon-ceramic braking set-up.

There are no rear seats for the GTAm models, instead there’s a substantial roll-cage and somewhere to store a pair of crash helmets. A pair of excellent carbon Sparco bucket seats are used up front, with a multi-point harness joining the inertia-reel belts.

Take the already brilliant Giulia Quadrifoglio and devote an unimaginable amount of extra attention to every key area that makes that car shine and you have a wonderful, exuberant and exciting driver’s car.

You also have one that looks both achingly beautiful and menacingly brutal at the same time, its aero additions blending with the Giulia’s curves with such cohesion it will silence the most cynical observer the first time they see it. Where other cars given such a treatment can look cartoonish, like caricatures of real cars, Alfa’s design team has proven that wind tunnels and aero need not result in a car that looks like it was born in an autoclave.

Inside, the GTAm feels every inch as welcoming as the Quadrifoglio, until you peer in the mirror and spot the cage or use the motorsport-inspired strap to pull the door closed. And then you fiddle with the belts, depress the brake, thumb the starter button on the steering wheel and feel a little underwhelmed by the softer tone of the 2.9-litre V6, which has been muted by the latest emission regs.

Not to worry though, because within a 20 kilometers or so, when the fluids are up to temperature and the sticky Cup 2 rubber is warming up, the GTAm grabs at your senses the first time you find yourself alone on a great piece of road.

There’s a firecracker response to the throttle, especially so in Race mode, and the gearshift is so sharp you’d struggle to blink once in the time it takes for another ratio to land after you’ve pulled on a paddle. As powertrains go it remains an intoxicating combination, one that blends a surge of torque with blistering power like the very best. When the opportunity presents itself it can run out of revs sooner than you are anticipating in the lower gears, while the reverse is the case in higher ratios when reaching the last few hundred rpm of peak power, but it’s a marginal complaint that only comes to the surface because of the high quality of the package.

And then you come to the interesting stretches of tarmac, those that twist and buck and require you to shed speed as quickly as you have gained it. Pedal modulation for the large ceramic Brembos is an improvement over what you’ll find in the Quadrifoglio, with greater finesse replacing the grabbing action, and with the retardation worthy of spending that time faffing with the harnesses. On track it takes a rather leaden foot to trigger the ABS and force the Cup 2s to complain, with no sign of fade regardless of the laps and stops you ask of them both.

Those Cup 2s provide next-level grip even over the Quadrifoglio’s supremely grippy Pirelli P Zero Corsas. Combined with the quicker steering the front reaches the apex in a beautifully linear fashion, with the front rolling into the corner to match the calmness of your hands at the wheel. It allows you to open the throttle earlier and lean on those rear tyres harder to drive you out of the bend.

In slower turns you can control any oversteer with measured levels of correction to avoid spikes of wheelspin and overworking the diff. When the speed picks up there’s a higher level of confidence, allowing you to push harder and stay within the limits of grip with more reward in terms of feedback and interaction, the GTAm playing to your tune. It’s a car that makes you think and plan, be smooth and precise, rather than one you throw around like a rally special and sort it out later.

There is a fly in this pure ointment, however, and that’s the rear diff. It is the Giulia Quadrifoglio’s Achilles’ heel and one that strangely hasn’t been addressed on this most extreme example of an Alfa to date. The issue is the speed at which it reacts when you’re really pushing on. It starts with the inside rear wheel being allowed to spin up and burn away torque, power and rubber while the diff waits for the ECU to work out what’s required, and when it does you can already be well through the corner. All the while the clutches within the diff are getting hotter and hotter before they finally give up the ghost and ask for 20 minutes to cool down in a pit garage. And while it’s far more of an issue on track when playing for the cameras than it is on road, the GTAm is billed as a track car…

And yet few cars have made us smile as much as the GTAm. It’s the kind of car that is becoming increasingly hard for manufacturers to justify putting into production in today’s world of chasing EV brownie points. But the Giulia GTAm is one of those driver’s cars that makes you want to drive for the sake of it and it doesn’t require you to be travelling at the speed of sound to enjoy it. Expensive yet exciting, irrelevant yet irresistible; simply magnificent.

$218,090 is an eye-wateringly expensive price to pay for a four-door saloon car where one that’s near identical and nearly as quick can be had for half the price. Or $218,090 is a bargain in a world of unobtainium that can cost ten times as much but offers a tenth of the rewards. Take your pick.

Jaguar’s XE Project 8 is off sale now but offers similar excitement and thrills, albeit in quite a different manner with its less feral supercharged V8 and less exuberant all-drive chassis. You can pick up a bewinged example for around $159,000. Or you can spend $175,000 on a new 911 GT3, assuming Porsche will sell you one, that is.