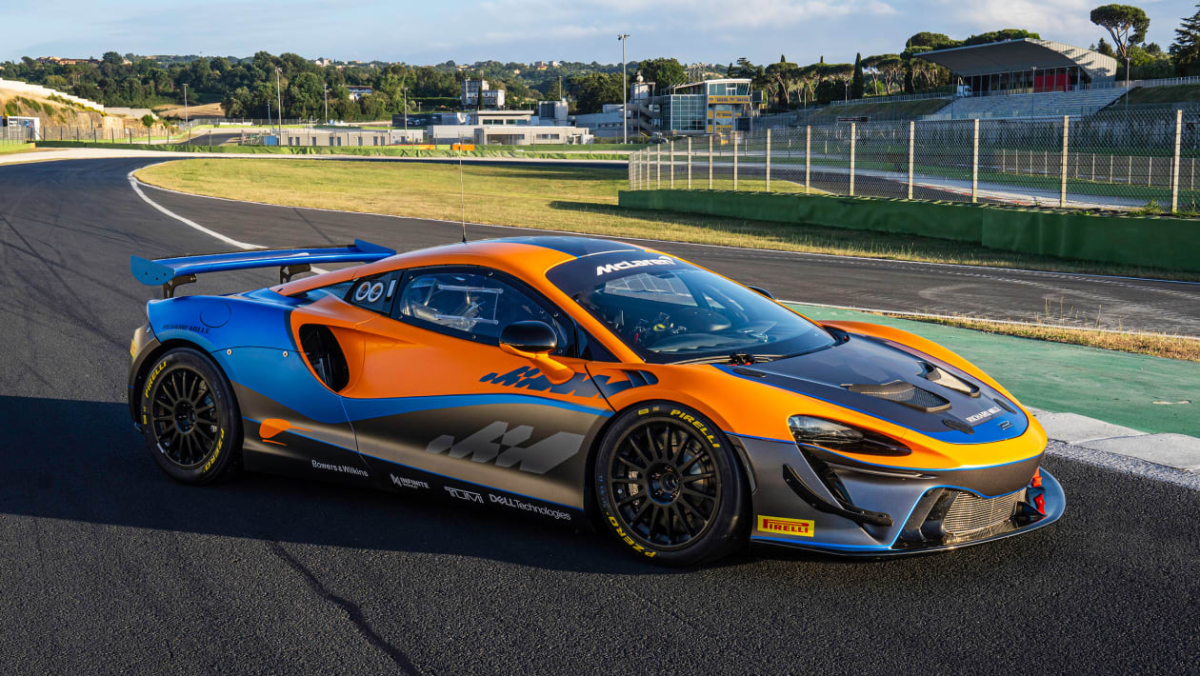 McLaren has revealed its new Artura GT4 race car, one that’ll compete with the Lotus Emira, BMW M4, Aston Martin Vantage and more built to the FIA’s GT4 regulations. It comes hot on the heels of the road-going model’s troubled launch earlier this month, although the hybrid elements of the Artura’s powertrain have been removed from the racer, leaving the twin-turbocharged V6 as the sole power source.

Removal of the e-motor and battery pack is due to a requirement of the current GT4 regulations, which will leave the Artura race car with the Ricardo-built 120-degree turbocharged V6. At the car’s reveal McLaren had yet to reveal specific power and torque outputs and they will be subject to the Balance of Performance regulations. McLaren was quick to say the V6 on its own has more than enough performance to reach the GT4 category power limit, which can be up to 470bhp.

The removal of the hybrid drive elements also lowers the GT4’s weight by 130kg, although the car’s overall weight has yet to be confirmed, but it is expected to weigh 100kg less than the previous 570S GT4 racer. The engine itself runs on a Bosch Motorsport ECU, and pairs to McLaren seven-speed SSG transmission rather than the road car’s new eight-speed dual-clutch unit. As per GT4 regulations, the seven-speed transmission incorporates a physical reverse gear, something that’s done electrically in the road car.

The carbonfibre monocoque and aluminium suspension is otherwise closely related to the road car, with the carbon tub topped and tailed by two aluminium subframes to which double wishbone suspension is bolted. As with the road car, the GT4 car runs a basic coil and damper package with traditional anti-roll bars, in place of the 720S’s hydraulically cross-linked system.

In comparison to the 570S GT4, the Artura runs a wider front tyre that aims to improve front-end grip, while the rear axle now features a limited slip differential in place of the previous car’s brake-steer system. McLaren has also focused on improving both brake cooling and general component resilience given the GT4 class is able to compete in a variety of endurance races around the globe, from the Nürburgring 24h to the Bathurst 12hr.

The Artura’s aero package is based largely on the road car, with the main differences found under the floor and a new static rear wing. The wing itself is mounted on swan neck struts that connect to the chassis through the rear mesh facia, negating the need to disassemble it if the rear clamshell needs to be removed.

McLaren says the Artura GT4 will be ready for customer racing activities for the start of the 2023 season.